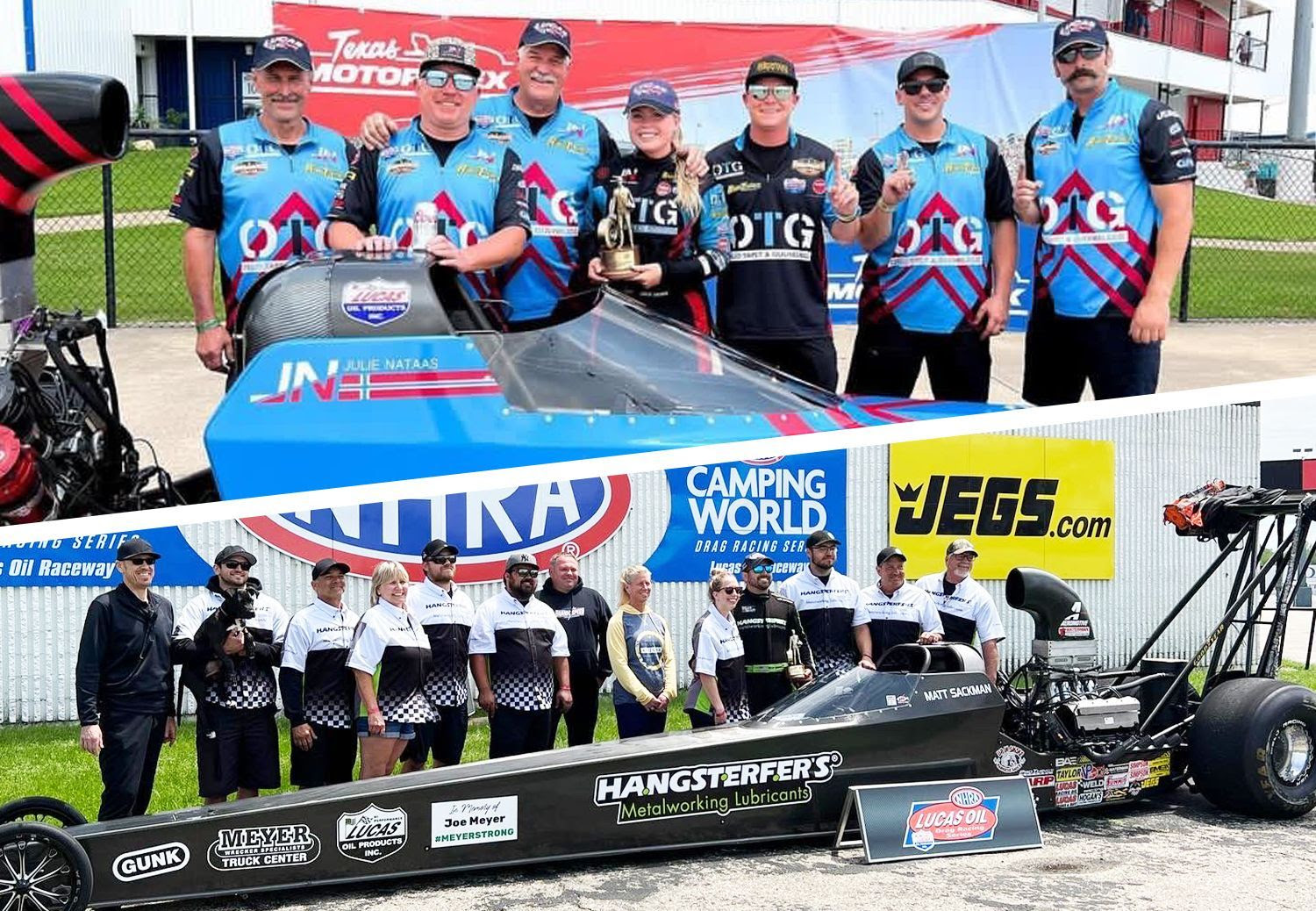 With two teams competing over 900 miles away from each other, Randy Meyer Racing completed its second double-up winning weekend in NHRA Top Alcohol Dragster with drivers Julie Nataas and Matt Sackman. On Saturday, Nataas won the NHRA Central Region race at the Texas Motorplex near Dallas, and Sackman won the NHRA North Central Region opener at Lucas Oil Indianapolis Raceway Park on Sunday. Both drivers are now the points leaders in their respective regions.

Driving Randy Meyer Racing’s flagship car, the Oslo Tapet & Gulvbelegg (OTG) A/Fuel dragster, Nataas qualified No. 3 at the Dallas event and raced past Todd Bruce, Chase Copeland, and Steve Collier to score her first Wally of the season. The win also moved her to the top of the national points standings.

“It was awesome to get the first win of the season,” Nataas said. “I knew we could double up again like last year. Last year Rachel [Meyer] got the win first, so it was nice to not have the pressure of winning because my teammate just won. Especially since we haven’t been able to get a win until this one. It’s been a while since we parked the OTG dragster in the winner’s circle. We have struggled with some gremlins this year, so it was a huge relief to finally get that win. We all needed it.” 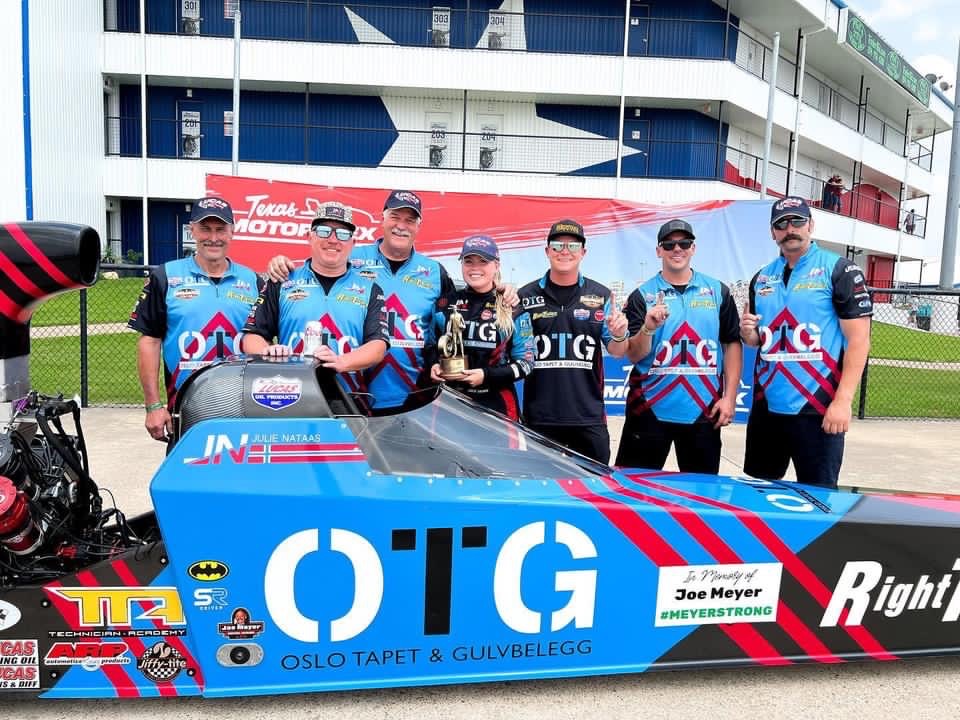 Sackman, who was tuned over the phone by Meyer, qualified No. 2 in the Hangsterfer’s Metalworking Lubricants entry at Indy before defeating J.P. Gutierrez, Robin Samsel, and Mike Coughlin to win his third Top Alcohol Dragster Wally. Sackman won the last two rounds on a holeshot while stepping up to a 5.247 at 268.92 MPH in the final round.

“Anytime you win it’s a good feeling, but to help Randy string a couple wins together, it was awesome,” said Sackman, who thanked car chief Rich Tretter, crew members Juliaun Pracht, Andrew Holisky, and Doug Foley Jr, parents Darren and Marie, brother Zach, and girlfriend Ryen Lamb. “To have Randy’s trust in us to take care of his race car and all of his stuff, it was pretty special. It was definitely a confidence boost for RMR and for me too. All of my family and friends were there. It was just a great weekend.” 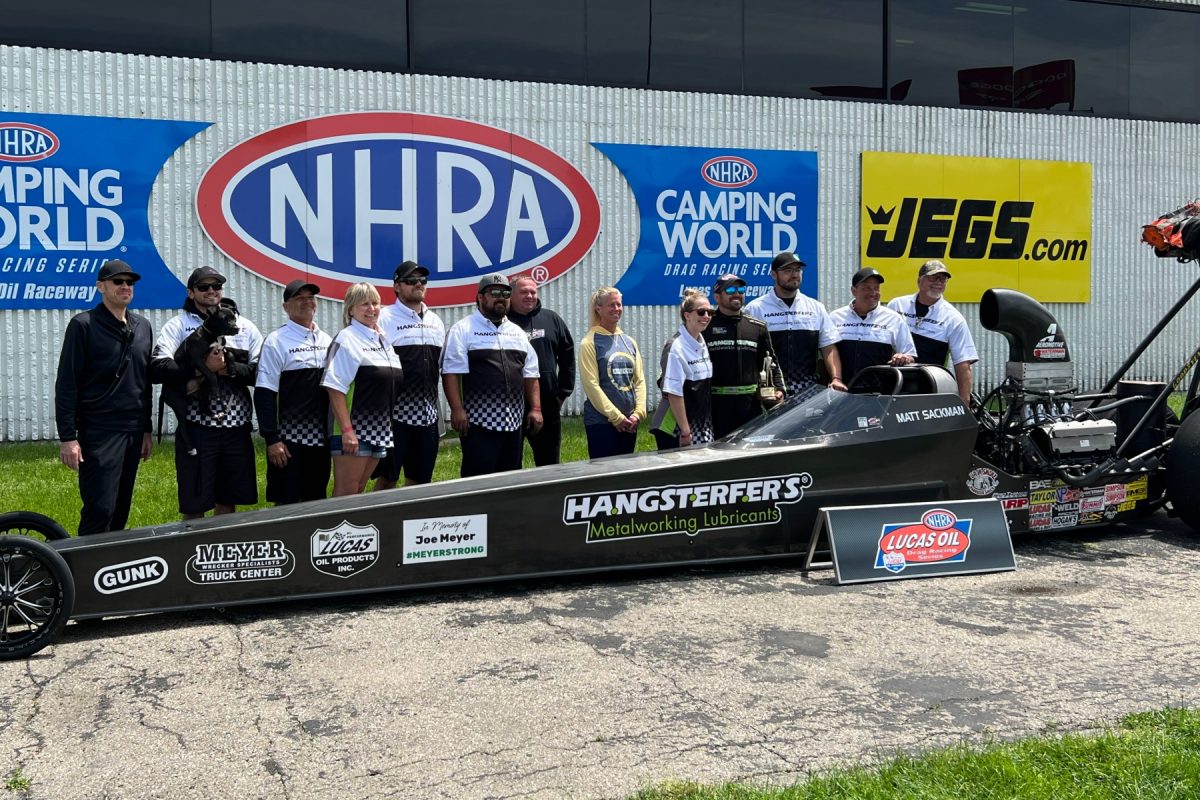 Meyer, who owns and tunes both cars, credited his teams for their work at the shop and at the track.

“It takes a lot of planning and good people,” Meyer said of racing two cars at two different events. “We had both and it finally came together. Because we’ve done it before, we have some experience in it and we know what we need to do. Even though we have a plan, you still need to have good people to follow through with the plan. We had real good people in both places.”

Meyer is used to running two cars at most events, but they’re usually pitted right next to each other, not 900 miles apart. Once or twice a year, the team will divide and conquer at two different events. It’s a challenge Meyer actually enjoys.

“It’s actually a little bit easier for me to run two cars this way,” Meyer said. “When you have two cars in the same pit, you have so much chaos going on that it’s hard to focus. So when I have one car, it’s easier to take care of. The other one I don’t know all the other stuff that’s going on, so I don’t have all the distractions. I just take care of tuning and give the guys direction on where we need to go and what changes we’re going to make based on the data I have. It makes it real easy. It’s actually easier than most people think it is, but you have to have everything in place to do that.”

The double-up weekend was a perfectly timed morale boost for Meyer, who admitted he was starting to lose his confidence after a brief winless streak.

“It’s not that we had a bad car, we just didn’t have a good car,” Meyer said. “We never got any breaks. When you win something big or you win a championship, you need a few breaks along the way. We’ve been to a few finals, just haven’t been able to seal the deal. We’re still struggling a little bit. The cars aren’t running as good as I want them to be or what they should be. The [fuel temperature] rule changes have affected my program pretty heavily. We’re still trying to overcome that.”

Randy Meyer Racing’s next appearance on the NHRA Lucas Oil Series schedule is two months away at the NHRA Central Region race at Heartland Motorsports Park, July 29-31, in Topeka, Kansas.

“We’re looking forward to a break,” Meyer said. “This will give us a chance to regroup and rebuild. We’re going to make some more changes for the second half of the season and see what happens. We’re also going to do a little Funny Car racing and some other stuff in between.”