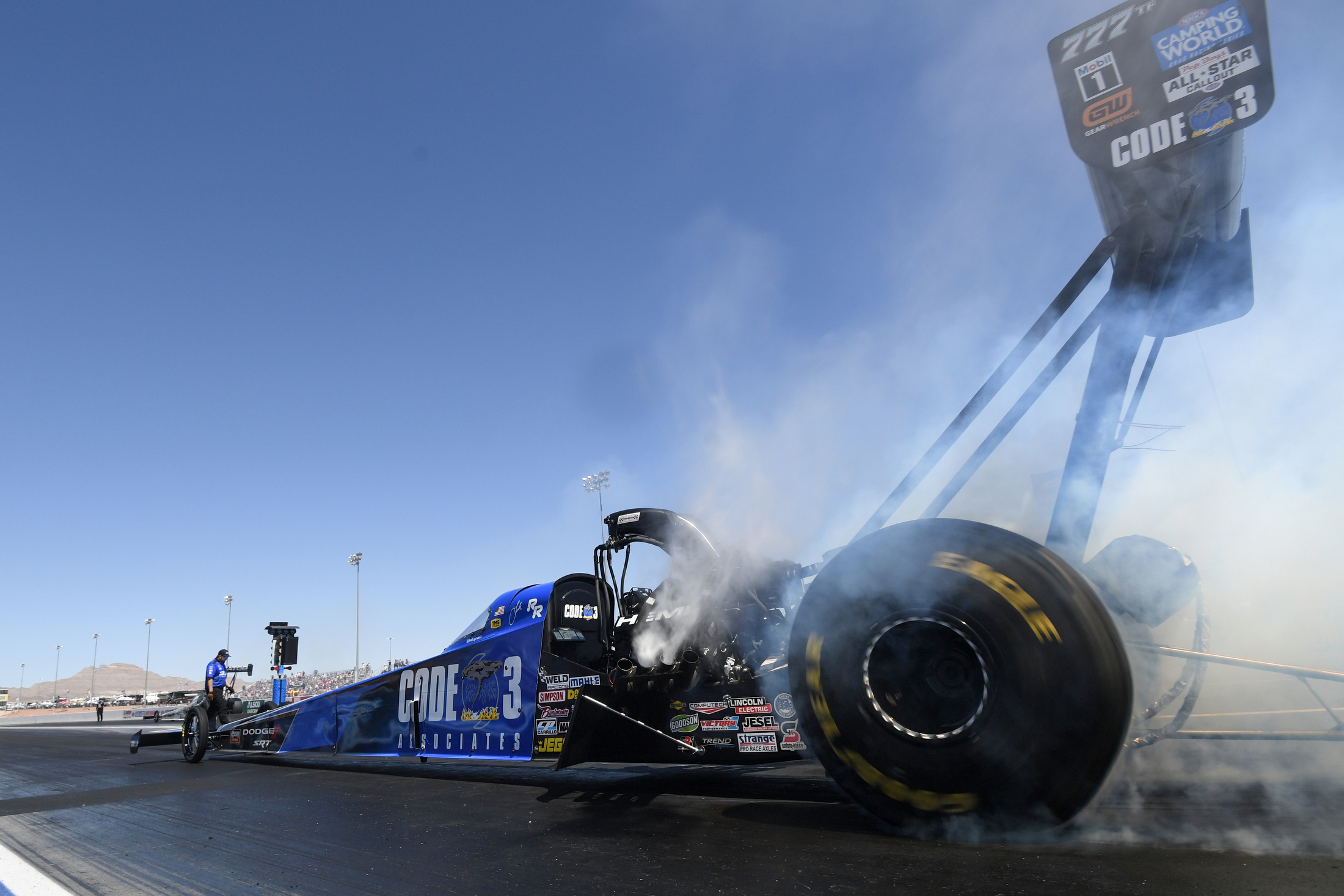 Top Fuel star Leah Pruett finished Friday in impressive fashion at The Strip at Las Vegas Motor Speedway, picking up the provisional No. 1 qualifier at the NHRA Four-Wide Nationals and moving a step closer to the first Top Fuel No. 1 qualifier for the first-year Tony Stewart Racing team.

John Force (Funny Car) and Aaron Stanfield (Pro Stock) are also the provisional No. 1 qualifiers at the fourth of 22 races during the 2022 NHRA Camping World Drag Racing Series season.

Pruett, who is also married to Stewart, powered to a run of 3.741-seconds at 326.79 in her 11,000-horsepower Code 3 Associates dragster during the final qualifying session on Friday. If it holds, it would be the 13th No. 1 qualifier in her career and a major bounce back after not qualifying at the most recent race in Gainesville.

“I was super stoked to make two full pulls, and I knew the second one was even better,” Pruett said. “It’s our fourth race as a team and these are the building blocks of what’s going to take the team to the next step. We’re just enjoying this moment and we’re just going to keep picking away at it. To not qualify at a race out of the gates can be disheartening on one hand, but the attitudes these individuals have, I’ve never been around such positive-minded individuals. They’ve helped me and we’re happy right now.” 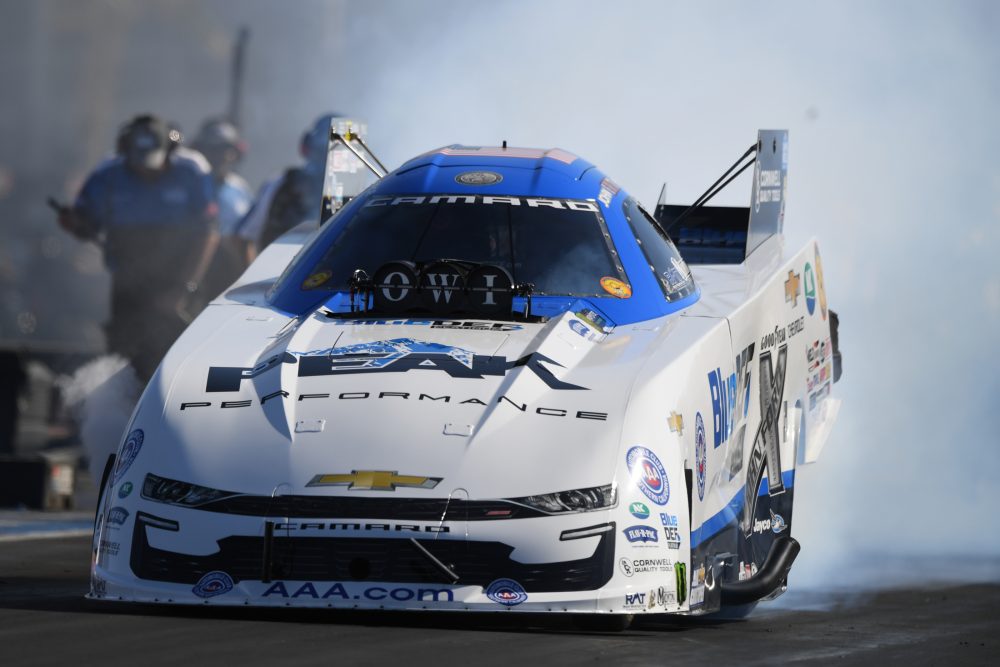 Looking for his first No. 1 qualifier of the year in Funny Car, Force went to No. 1 on Friday with a run of 3.887 at 327.90 in his 11,000-horsepower PEAK Chevrolet Camaro. If it holds, it would be the 164th top spot for the 16-time world champion. It has been an up-and-down season for Force in qualifying through four events, as he’s been third once but also 16th in Pomona and 15th at the most recent race in Gainesville. But he looked strong on Friday and he also has a long history of success in Las Vegas, posting six wins at the facility.

“My car was really fast and testing, but it got to Pomona and we were off our game and couldn’t get it back in Gainesville or Phoenix,” Force said. “It just wasn’t going anywhere. It’d be quick, one run and then wouldn’t for another. It made one good run today, but there again, it didn’t do it again (in the second qualifying session), so there probably be changes in the clutch. That won’t stick for tomorrow, but it feels good to get back up here (in the No. 1 spot).” 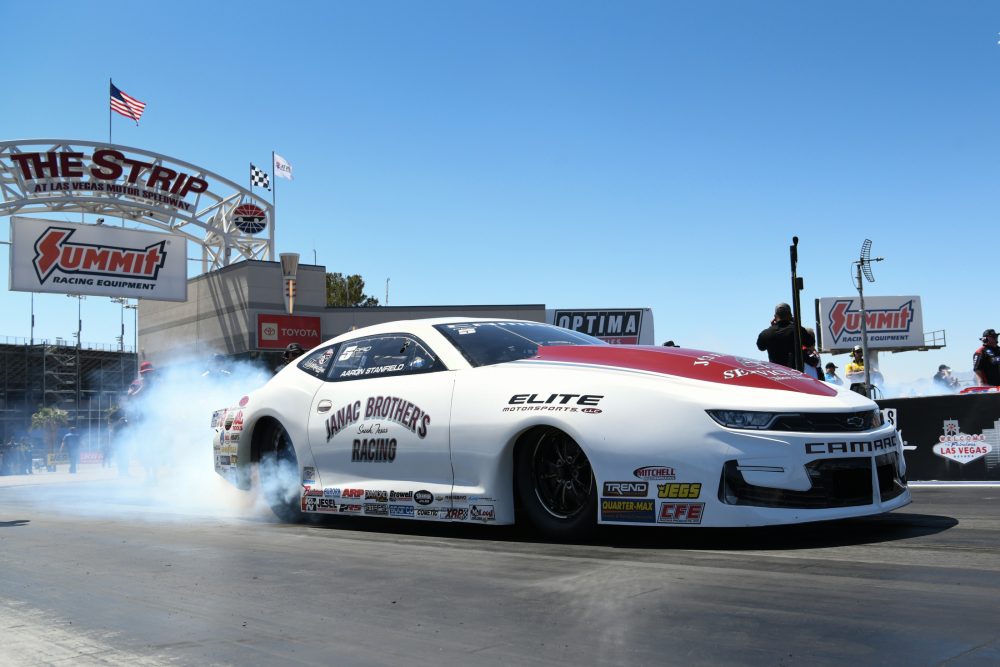 Pro Stock points leader Stanfield continues to roll early in the season, picking up the provisional No. 1 spot after his pass of 6.642 at 206.42 in the opening qualifying session in his Janac Brothers Chevrolet Camaro. If it holds, it would give Stanfield his second straight qualifier and the third one in his young career. After back-to-back final rounds to open the year, including a victory at Phoenix, Stanfield impressed in the first four-wide race of the year and is on track for another stellar qualifying effort. He hasn’t qualified out of the top two in the first three races of 2022.

“Before we ran, (crew chief) Mark Ingersoll and I talked and he said if we ran 6.63, we’d crush them and we came pretty close to that,” said Stanfield. “This is a huge adjustment from Gainesville. The air and track conditions are totally different, but our guys know what to do. Right now, I’ve got a smooth and consistent hot rod and I just need to take advantage of it. I feel pretty good (about four-wide racing), but you do have to pay attention up there.”

Greg Anderson, the reigning world champ, is currently second with a run of 6.651 at 205.88, while defending event winner Erica Enders is right behind after going 6.664 at 206.01. Both Anderson and Enders have a class-best eight wins in Las Vegas, while Anderson is also seeking his 100th career win this weekend.

Qualifying continues at 12:30 PT on Saturday at the NHRA Four-Wide Nationals at The Strip at Las Vegas Motor Speedway.