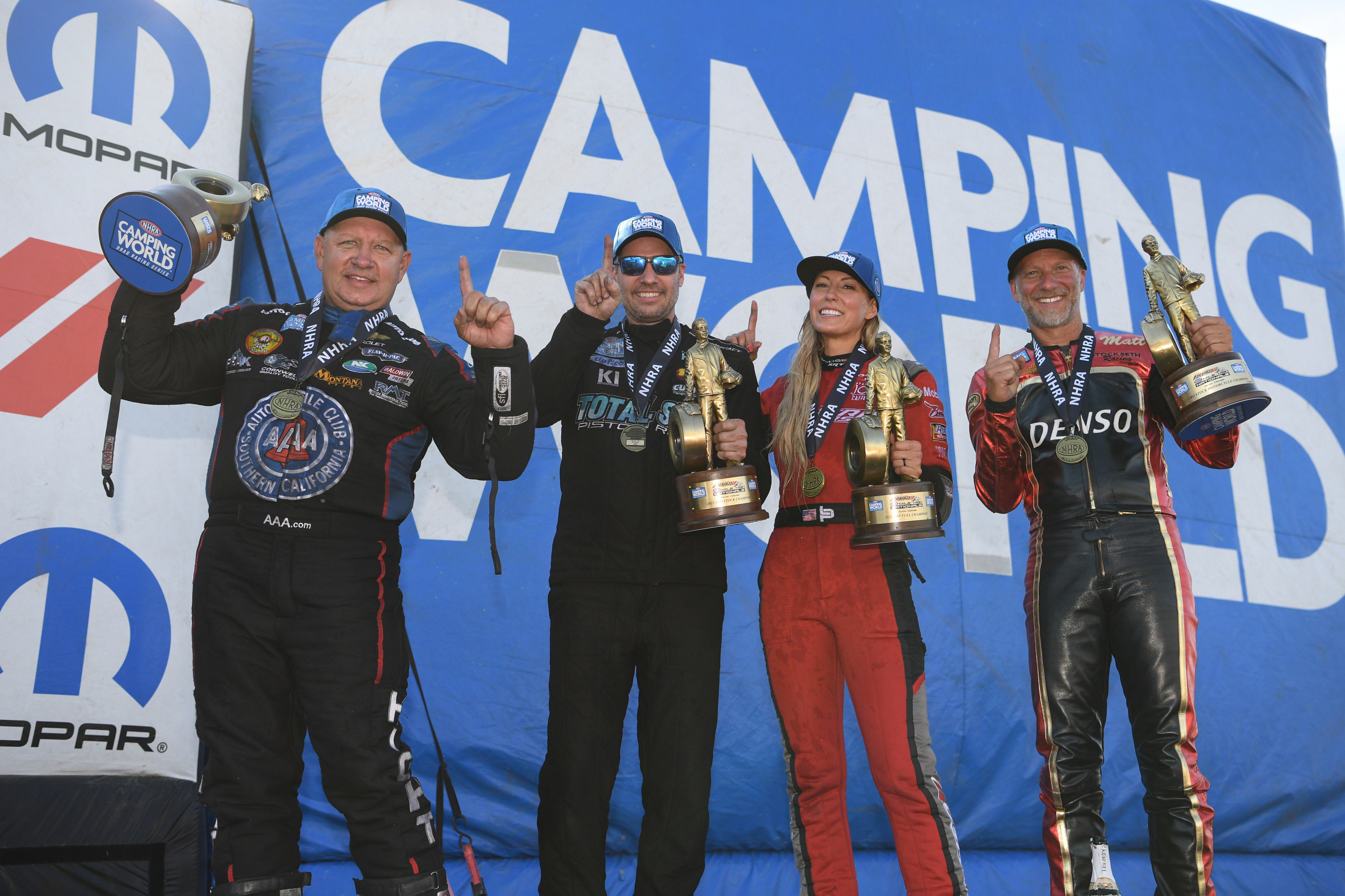 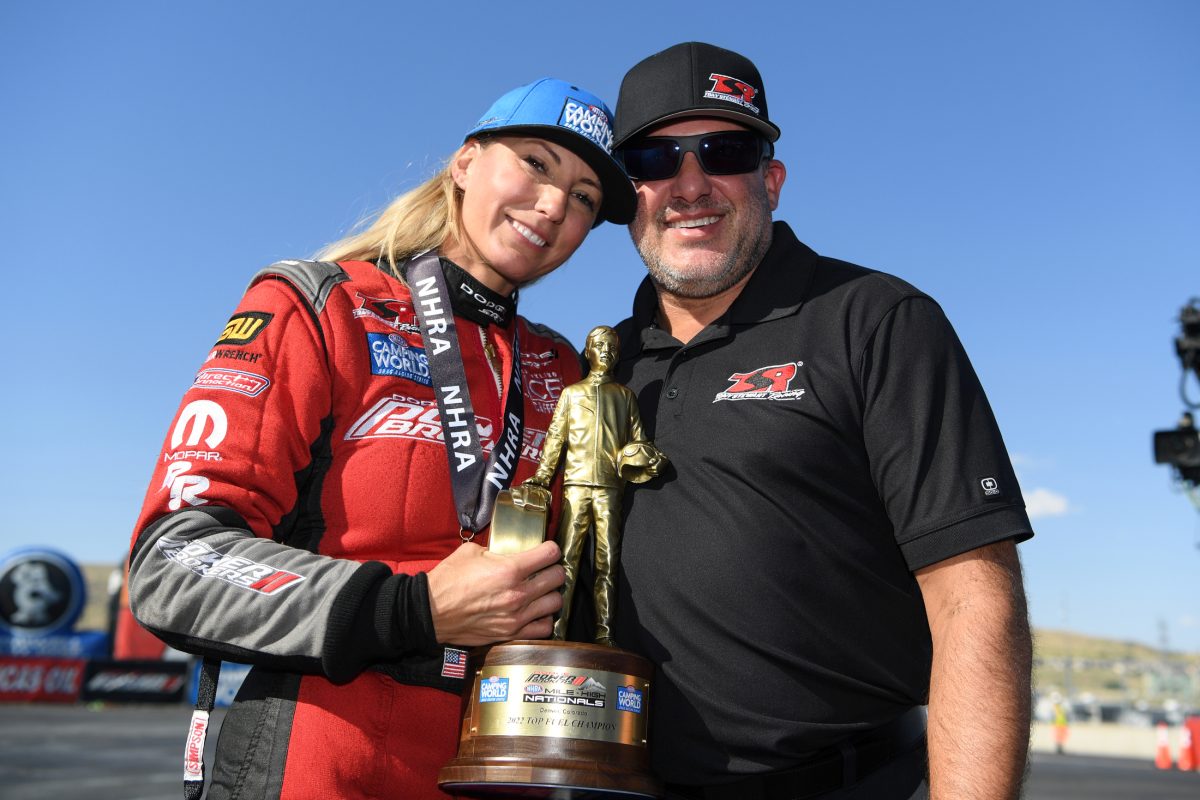 Pruett, who is also married to Stewart, went 3.884-seconds at 316.38 mph in her 11,000-horsepower Dodge Power Brokers dragster to knock off Shawn Langdon in the final round. It gives Pruett her first win of the season and 10th in her career, as well as her second victory in Denver. She reached the final round by taking down Antron Brown, Clay Millican and Justin Ashley, making a series of consistent runs that was her trademark this weekend in Denver. Pruett made another strong run in the championship round to close out one of the more meaningful weekends in her career at her sponsor’s race. Getting the first Top Fuel win for the TSR team was also massive for one of the sport’s most popular drivers.

“This is absolutely everything,” said Pruett. “We have the best fans in the entire nation. This is my favorite track. I’ve been trying to be emotionless all day just to do my job, but this is for (crew chiefs) Neal Strausbaugh, Mike Domagala, Ryan McGilvry, and my entire crew that has been flawless all weekend. I told you guys a long time ago it was coming and couldn’t be prouder than to do it at a place like this. Thank you, Bandimere.”

Langdon advanced to his second final round this season and 37th time in his career after getting past Greg Carillo, points leader Mike Salinas and Josh Hart. Salinas’ points lead stands at 10 over Brittany Force at the halfway point of the season. 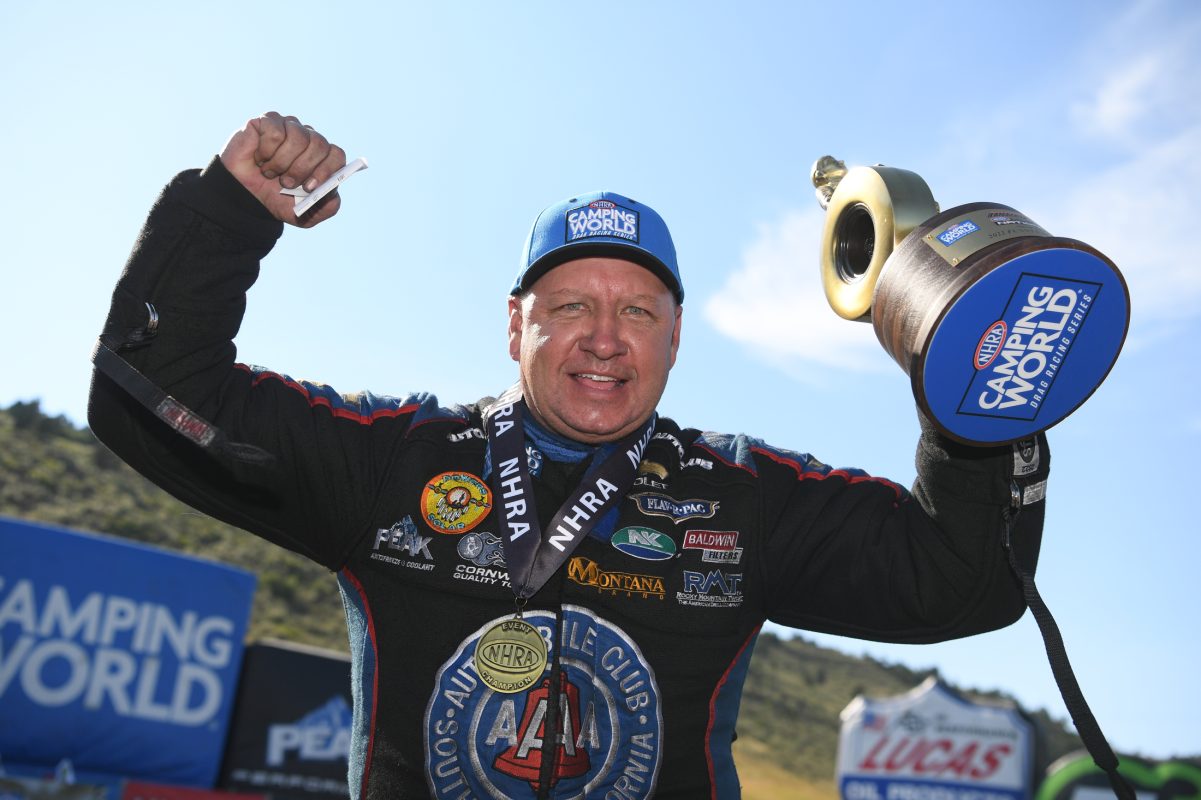 In a Funny Car finals rematch of the most recent race in Norwalk, Hight delivered the same result against Bob Tasca III, continuing his incredible season by going 4.065 at 311.92 in his 11,000-horsepower Auto Club Chevrolet Camaro SS. That gives the points leader his second straight win, fifth this season and 58th in his career, and his fifth victory in Denver. Hight, who qualified second, reached the final round for the seventh time this year in what’s been a dominant stretch by defeating Terry Haddock, J.R. Todd, and teammate John Force. He powered past Tasca to win for the third time in five races and open up the possibility of sweeping the Western Swing.

“Things are going our way right now, but there’s a lot of good teams out there,” Hight said. “I give all the credit to our team. Last year was probably the worst race we’ve ever had on the mountain. This year, we made quality runs and went down the track every time. We made a lot of good runs, and I was confident my guys had it figured out. We just raced really smart, made it go down the track and I tried to do my job. To have five wins at this point in the season, it’s surreal. Everything is working from top to bottom and we’re just going to try to stay focused and keep working. It’s been a great first half of the season, but these next 11 are going to be even tougher.”

Tasca reached the finals for the second straight race and 23rd time in his career by knocking off Chad Green, defending world champ Ron Capps and Jack Wyatt, who upset No. 1 qualifier Matt Hagan in the opening round. Hight also extended his points lead to 95 points over Hagan. 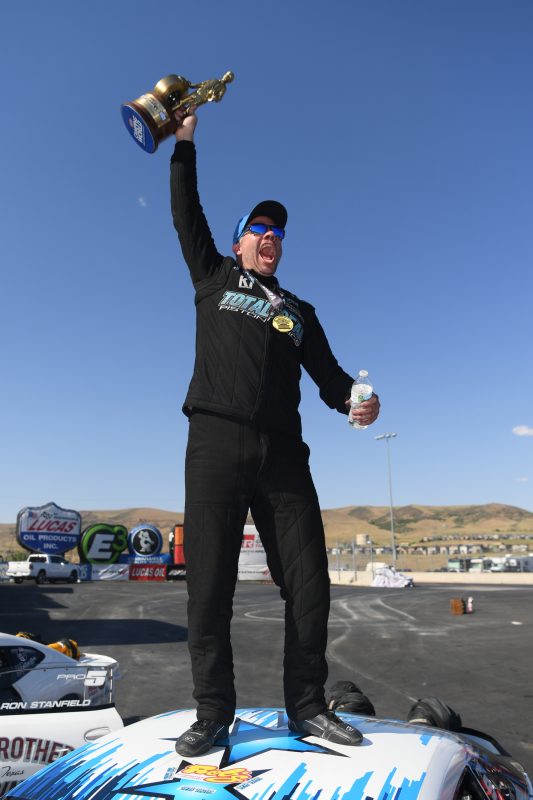 Hartford was terrific on the starting line when it counted, using a .004 reaction time and then a strong run of 6.967 at 196.36 in his Total Seal Camaro to knock off No. 1 qualifier Aaron Stanfield in the finals. It gives Hartford his first win of the season and fifth in his career, and also some redemption at Bandimere Speedway after finishing as the runner-up to Greg Anderson in 2019. That was the last time Pro Stock raced on Thunder Mountain before this weekend, and Hartford made the most of it by knocking off Deric Kramer, Mason McGaha, and Cristian Cuadra. He left no doubt against Stanfield, leaving the starting line first and rolling to a big win.

“I love Bandimere, but it’s a hard facility to race at,” Hartford said. “Since Epping we’ve turned our program around and come raceday I know we’re going to have a top car. It would eat me up every time I watched the finals versus Greg in ’19. It’s a hard pill to swallow knowing if I would have driven better, I could have won that race. But to have this redemption it’s great for this team. Coming up here, it’s an equalizer and anyone can win on raceday, but I was relaxed, and I knew I had a great car.”

Stanfield reached his fourth straight final round, sixth this season and 12th in his career after knocking off Bo Butner and Troy Coughlin Jr. He also closed within 35 points of leader Erica Enders, who fell in the first round. 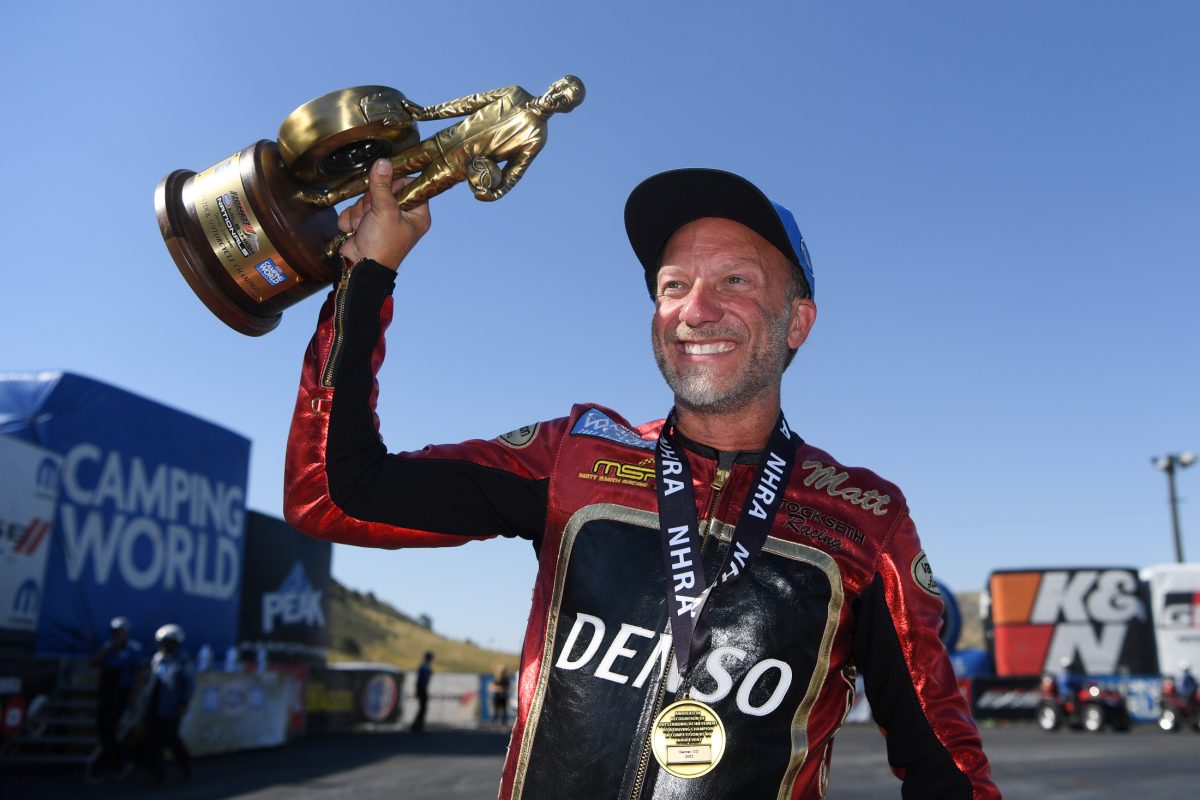 Smith capped off a dominant weekend in Pro Stock Motorcycle by going 7.097 at 190.22 on his Denso Auto Parts Buell to knock off Joey Gladstone and win for the second straight time in Denver, also setting the track speed record en route to his 34th career win and second this season. It was a fitting finish to an event that included track records all weekend, including a couple on Sunday. He became the first rider to reach the 7.00s in qualifying and then became the first in the class to go 190 mph on Thunder Mountain, doing so in his semifinal win against Angelle Sampey. In the final round, Smith went event faster and nearly equaled his qualifying run of 7.090, as he remained a clear step ahead of everyone in Denver.

“This is the bike that won this race last year and it paid off,” Smith said. “We qualified No. 1, won the race, and set both ends of track record. I can’t ask for much more than that. I really wish I’d have run Angie in the final, but something happened to her bike in the (semifinals). Her bike slowed up, but Denso took the win and that’s most important.”

Gladstone reached his second straight final thanks to wins against Ryan Oehler, Eddie Krawiec and Angie Smith. Steve Johnson stayed in the points lead and now holds just a 10-point advantage over Angelle Sampey and 19 over M. Smith.