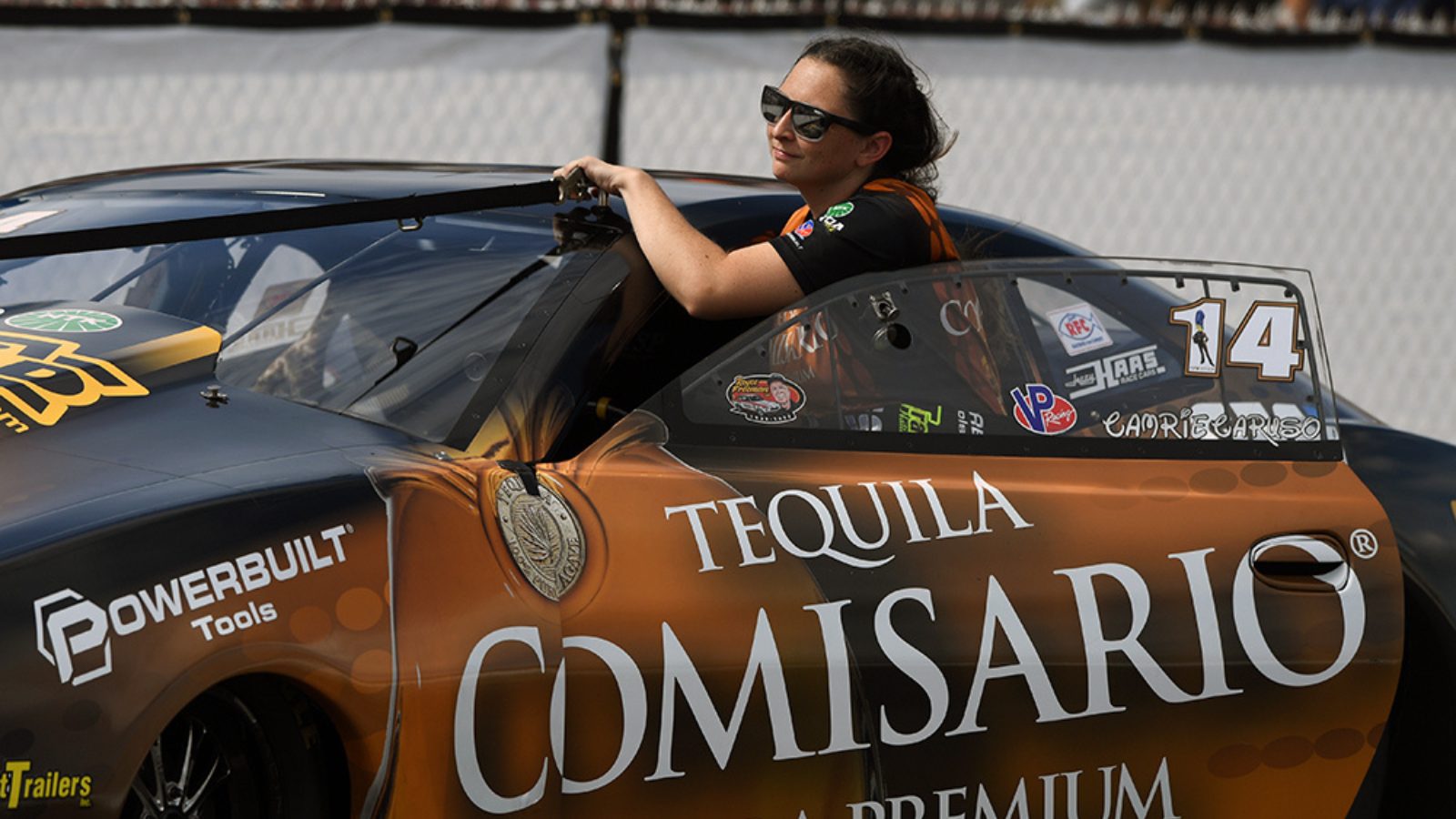 With just six races left in her rookie season, Pro Stock driver Camrie Caruso will be battling a tough contingent of drivers for the Camping World Pro Stock world championship starting this weekend at the Pep Boys NHRA Nationals at Maple Grove Raceway. The 26-year-old driver will be racing the Tequila Comisario Chevrolet Camaro powered by Titan Racing Engines in the first race of the six-race NHRA Countdown. The first-year driver enters the playoffs in eighth place just 80 points from the top spot as Caruso pursues her dream of winning a world championship. At the beginning of the season the confident driver who resides in Denver, North Carolina, set lofty goals and she has not softened her stance on her mission.

“I am excited to get to Maple Grove Raceway and start the Countdown,” said Caruso, who has raced her way up the drag racing sportsman ranks. “I want to race for the championship and I have a team that can compete. Jim Yates, my crew chief, has won the world championship before and I know this Tequila Comisario Chevrolet Camaro is capable of winning rounds. I need to do my job in the car and that is what I have really been focusing on since Indy.”

At the historic U.S. Nationals two weeks ago, Caruso scored an impressive first round win over Pro Stock competitor Aaron Stanfield with a hole shot victory. She was unsuccessful in advancing beyond the quarterfinals but the first round victory gave her a boost in confidence and also gave the team much needed additional data in race day conditions. Throughout the season Caruso’s young team has been going rounds and accumulating data.

“Every time we go down the track we are getting better in one area or another,” said Caruso, a third generation racer. “I am getting more comfortable in the race car and Jim is getting more information he can use for a better tune-up. We are putting a lot of focus on these first three races of the Countdown in Reading, Charlotte and St. Louis. We want to come out of these three races in a better position so we can race for the championship.”

The Pro Stock competition will be tough for Caruso but with a final round appearance earlier this season in Houston, combined with a No. 1 qualifier at the same race the team knows they have the ability to run with anyone. This season Caruso has defeated world champions and established drivers as she worked her way through her first year in arguably the toughest class in the Camping World Drag Racing Series. Caruso’s marketing partners have been highly supportive throughout the season with Tequila Comisario adding the Pep Boys Nationals to their original five race marketing agreement. Caruso has also highlighted race cars with Powerbuilt Tools, Right Trailers, Kings of Vapors and Sand Haulers of America. New sponsors will be announced for a number of Countdown events as well.

“Our goal is to maximize our marketing partners through on-car and at-track exposure,” said Caruso. “We have companies like GESi, NGK/NTK and VP Racing Lubricants who have been with us all season and we are consistently working to promote their brands and products. It has been great to have this support in our first season and we hope a strong Countdown performance will raise their exposure even more.”

The track at Maple Grove Raceway will be quick and fast for every category and Caruso is looking forward to grabbing some of the valuable qualifying bonus points for being one of the three quickest race cars in each qualifying session. The Tequila Comisario Camaro has earned bonus points at several events and with just ten points separating competitors in the new Countdown standings every pass will be a chance to make up ground.

“This is my first Countdown so I am going to just try and do my normal routine and not get distracted by some of the extra elements,” said Caruso. “I am looking forward to the opening ceremonies when they announce all the Countdown drivers. This is a big deal for our young team and I am really proud of everyone who has worked so hard to put us in a position to race for the championship.”

The Tequila Comisario Chevrolet Camaro powered by Titan Racing Engines will get one qualifying run on Friday afternoon followed by two sessions on Saturday. The 16 quickest Pro Stock competitors will race on Sunday beginning at 10:30 a.m. ET following Top Fuel and Funny Car. The race will be televised nationally on FOX.