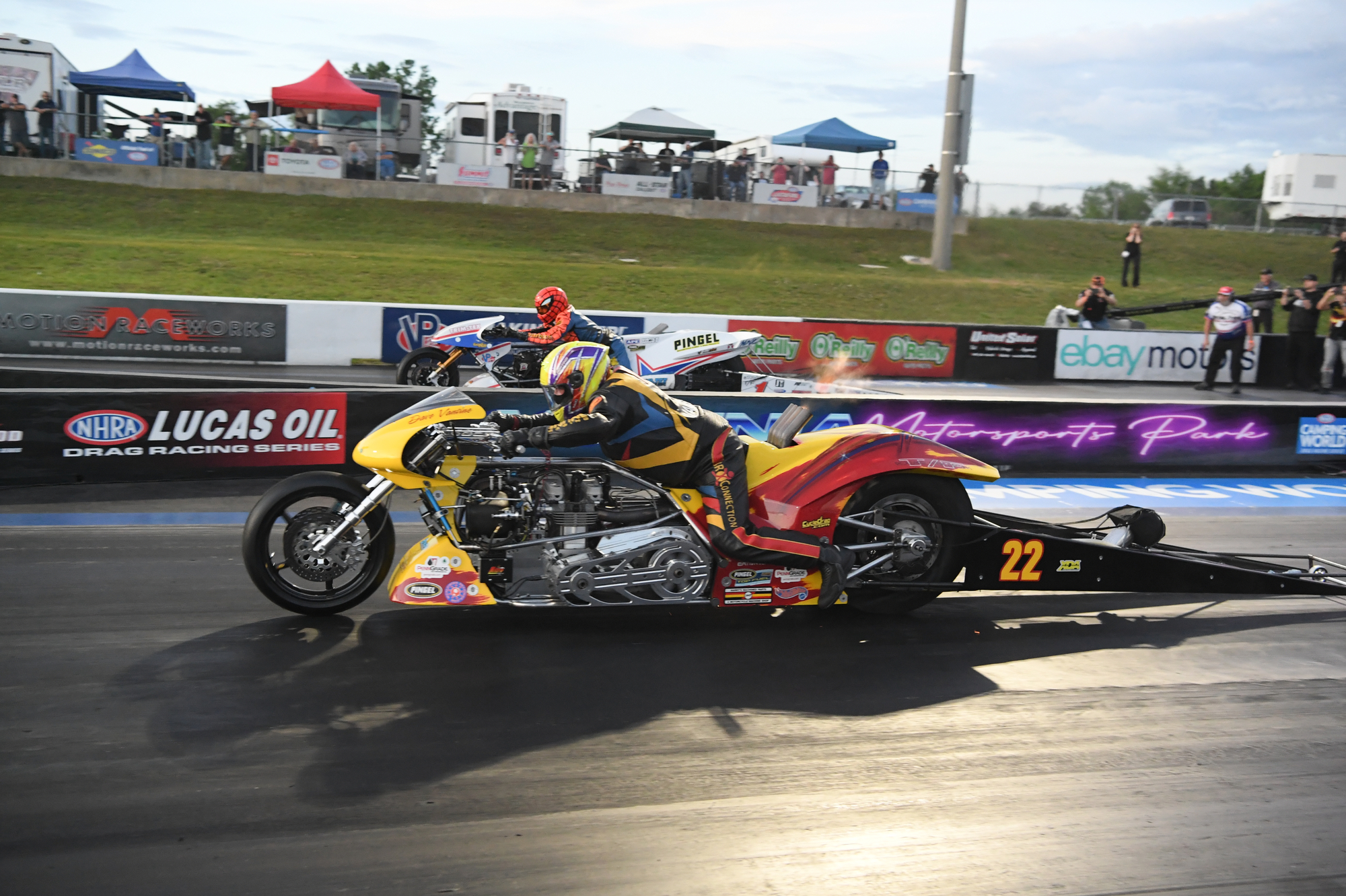 The world’s quickest and most powerful, nitro-burning motorcycles are poised to put on a thrill show at the largest and most illustrious independent drag racing showcase, the Cornwell Tools Night Under Fire from Summit Motorsports Park in Norwalk, Ohio, Sat. Aug. 6th.

Four of the fastest and most exciting nitro bikes in the world will do battle in front of an expected crowd of more than 40,000 when Larry “Spiderman” McBride, Dave “Yellow Bullet” Vantine, Sam “Nitro Conspiracy” Wills and Mitch Brown take part in the Pingel Top Fuel Motorcycle shootout presented by Cycledrag. 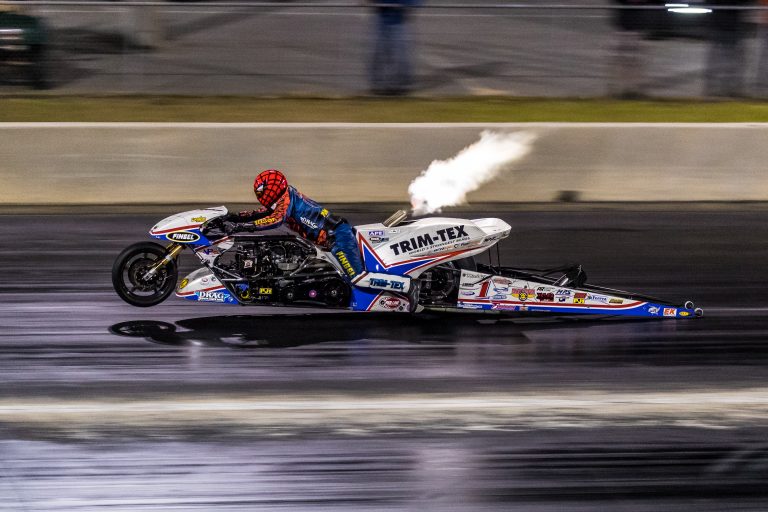 For McBride, a trip back to northern Ohio for the first time in more than a decade will be sweet redemption. The 20-time champion and world record holder was slated to lead the Top Fuel field into Norwalk last season before an emergency appendectomy sent him to the hospital instead of the race track. Now feeling much better and fresh off his record-shattering speed of 268 mph at the NHRA Virginia Nationals, the John Force of Top Fuel Motorcycle Racing, 40-year veteran McBride is eager to put on a show in front of the big crowd.

Cycledrag likes to refer to Vantine as the “Quickest Rising Star in Top Fuel Motorcycle” for good reason. In less than a decade aboard the Greg Pollard-built “Yellow Bullet” Vantine has established himself as the second quickest and fastest active Top Fuel Bike racer in the world with impressive personal bests of 5.71 at 257 mph. 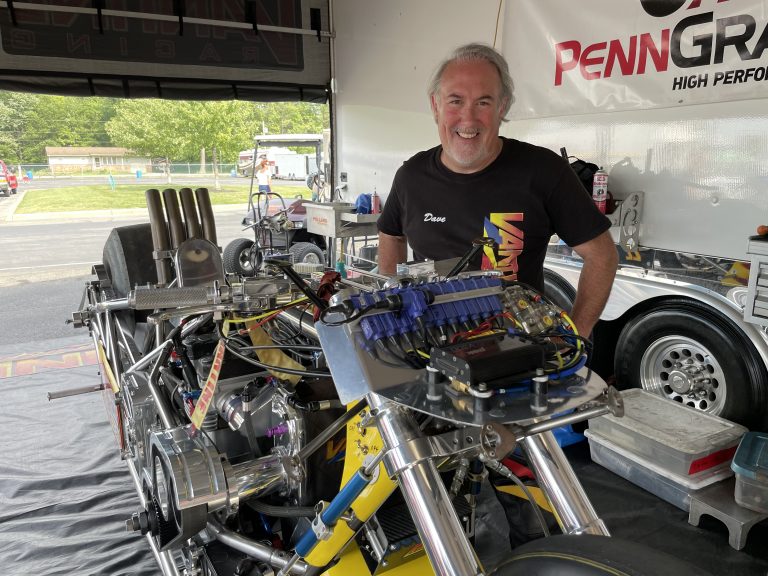 Vantine was the only competitor to hit the five-second zone in Norwalk last year, and with a host of off-season improvements on the motorcycle, the Vantine Imaging team is looking to steal the show in the Buckeye State.

Wills has been a force ever since, improving his career best numbers to 5.88 at 243 mph. He’s out for retribution as he was on the losing end of last season’s closest Night Under Fire motorcycle race when he was beaten to the finish line by mere inches and ended up in the sand trap. After installing a new and improved carbon-carbon rear brake, Wills says he’s ready to go as quick and fast as he needs to for the event win.

Last year’s Night Under Fire Top Fuel Motorcycle winner is out for back-to-back wins. Some have said Mitch Brown of Clearwater, Kan. must have a “golden horseshoe” for some of the fortuitous breaks his team has received over the past couple seasons – like in last year’s Norwalk final when his motorcycle shut off and he watched as his competition hit the 1,000-foot cone, crowning Brown the event winner. Brown is quick to point out luck is when preparation meets opportunity, and no one can deny Brown and his team have worked very hard to elevate their program. 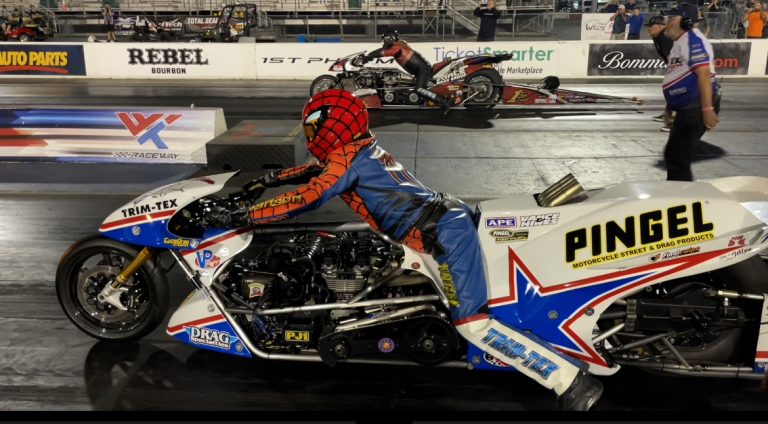 Fans were intrigued when a rivalry between Brown, the 2020 Man Cup champion, and McBride was ignited over a discussion about who is the rightful owner of the prestigious No. 1.  A head-to-head showdown in Norwalk between these two talented rivals will bring out the best in each team. With a track record of success, an improving program and runs in the 5.80s at over 230 mph, Brown is a serious threat to win the event once again. 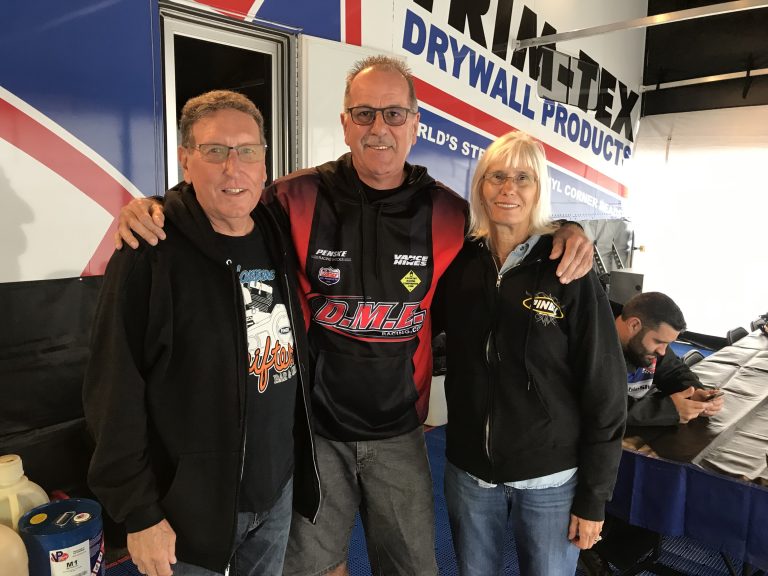 The great Wayne and Donna Pingel of Pingel Enterprise will continue their decades-long support of the Nitro Bikes and will be on-hand to present the racers with gas fund bonuses, extremely appreciated by the racers with today’s incredible cost of towing to the track.

If you are anywhere near the Norwalk, Ohio, area, don’t miss the biggest spectacle in drag racing as arguably the world’s greatest motorsports promotor Bill Bader Jr. will put on another unforgettable, tantalizing show full of NHRA stars, attractions, music, fire, lights, ice cream by the pound for a dollar and a massive $100K-plus fireworks show.

We will also pay tribute to the legend who started it all, the creator of this amazing event, Bill Bader Sr., who unfortunately passed away earlier this summer.

See you at the biggest race of the year, the Cornwell Tools Night Under Fire from Summit Motorsports Park, Sat. Aug. 6.

Story and photos provided by Jack Korpela of CycleDrag.com.