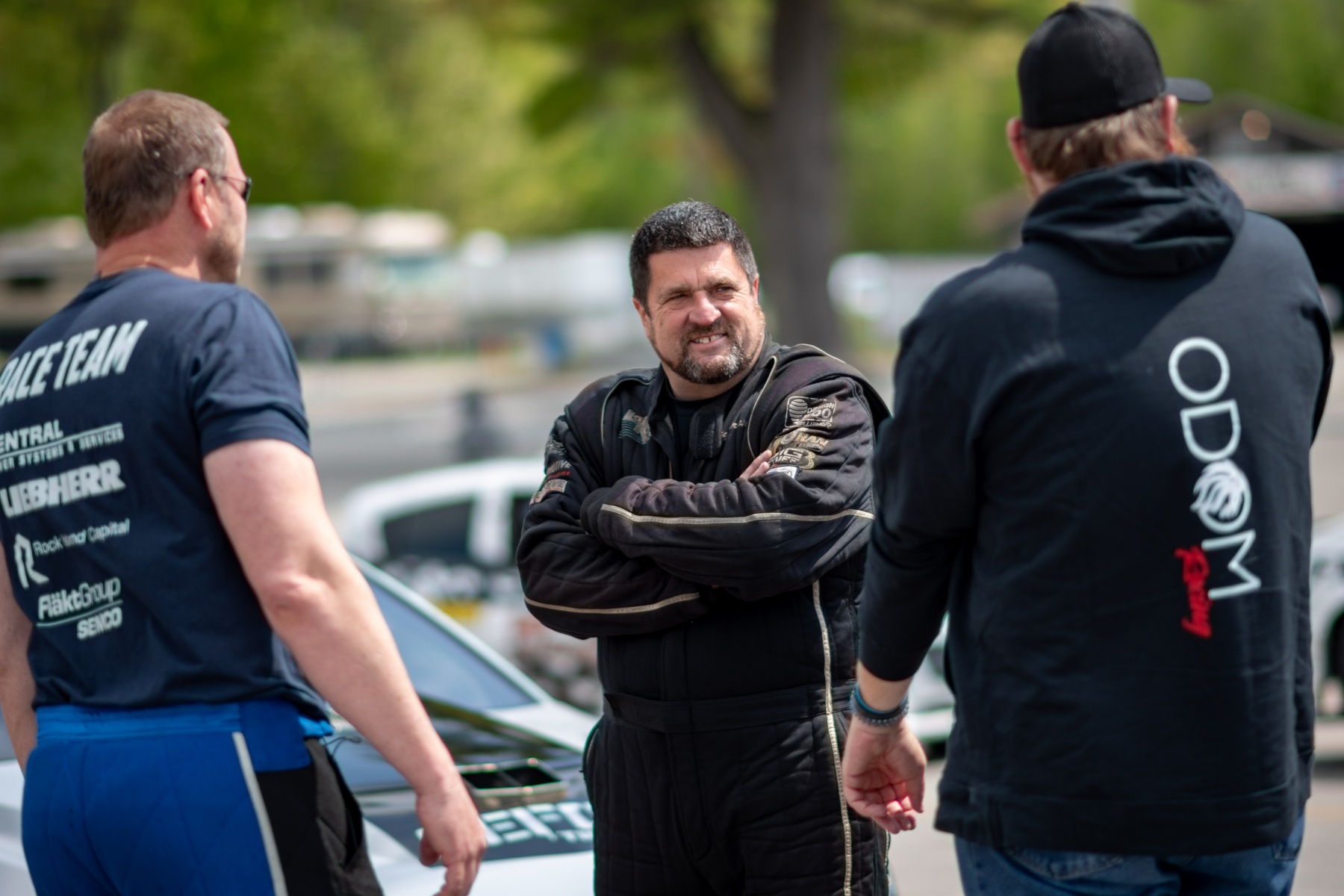 It is no secret that Discovery Channel’s Street Outlaws: No Prep Kings television show has taken the drag racing industry by storm, exposing the sport of drag racing to countless new fans the world over. Lately, it seems as though a new No Prep build is announced every other week, with even returning invitational racers making upgrades and building new cars.

But new race cars are not the only changes for Season Five racers; during the No Prep Kings race at Maple Grove Raceway in Mohnton, Pennsylvania, well-known racer Larry Larson announced new sponsorships from X Insurance and DEFCO Trucks by unveiling his familiar Cadillac, freshly wrapped and wearing the marketing partners’ livery.

A pre-season, unrelated conversation between Larson and DEFCO Trucks owner Randy Kent naturally led to talk of the upcoming schedule and what it really took to run the No Prep Kings Series for these racers. DEFCO builds high-performance, on/off-road Ford trucks for customers across the country but had not previously participated in any motorsport sponsorship. Kent, who was interested in the opportunity, had seen the show on television and attended the race at Palm Beach International Raceway.

“He was impressed with the crowd we drew and was interested in television time for the company,” says Larson. 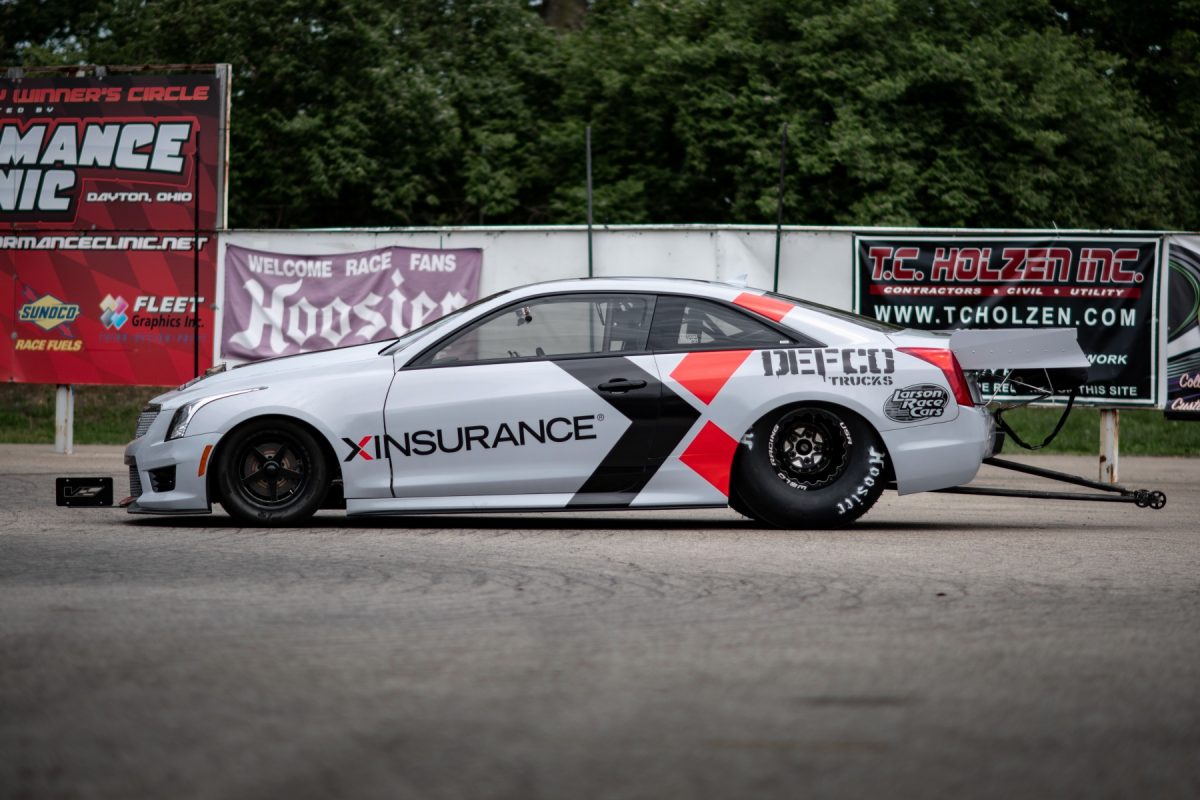 Kent then reached out to Rick Lindsey, President and CEO of X Insurance, who was also interested in the partnership opportunity as an addition to his current offshore boat sponsorship. After negotiations, the trio reached an agreement and X Insurance became the primary sponsor for Larson with DEFCO Trucks gaining secondary sponsorship in a partnership that works well for all three parties. X Insurance is a Utah-based company that provides clients with comprehensive insurance policies for anything they need to insure.

Anyone that has followed Larson throughout his drag racing career, from Drag Week to No Prep Kings, knows that his vehicles are normally bare, without any sponsor logos at all. Replacing the fan-favorite blue Cadillac with one wrapped in sponsorship logos was met with mixed emotions but ushered in positive feedback and support from fans.

“Everything I’ve previously built was a street car,” explains Larson. “You could race it, pull up and put pump gas in it, and drive off.”

The Cadillac is Larson’s first true, purpose-built race car and has been competitive in previous seasons, landing Larson in various positions within the top 5 in points standings. However, the cost of running the series continues to increase every year.

“I was considering parking the Cadillac this season, truthfully,” admits Larson. “When Randy and Rick agreed to come on board starting with Maple Grove it was an exciting opportunity for all of us.”

Larson acknowledges that without the commitment from the two companies, this season likely would not have been feasible for him.

“This sponsorship has allowed these new companies to be introduced to the motorsports industry while allowing my race program to try new parts, test more often, and be more competitive for the remainder of the season.” 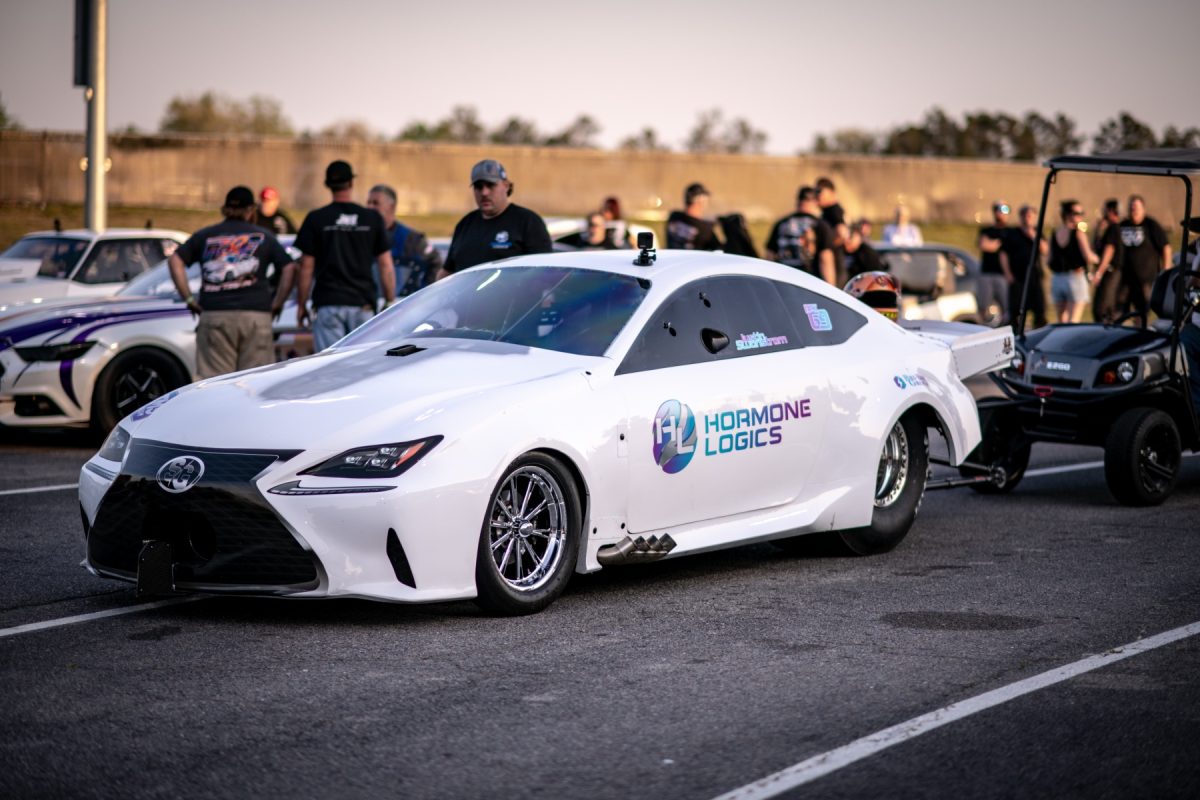 Larson is not the only racer to announce a new sponsorship for the 2022 season. Fellow Team X racer Justin Swanstrom secured sponsorship from Hormone Logics, a Florida-based company offering hormone therapy for both men and women as companies in all industries are beginning to take notice of the reach No Prep Kings has on a broad scale.

As the series gears up for its busiest four-week stretch, teams prepare to travel from Ohio to Kentucky to Minnesota to Texas in the month of June, which is geographically challenging for even the most successful, well-funded teams. Larson still tows his gooseneck trailer from race to race with his own dually truck.

“A lot of people don’t realize how much of a shoestring budget I really do run my program on,” says Larson. “I drive home between every race because I have to be at the shop during the week and run my business. Taking off for appearances and staying on the road just isn’t an option for me.”

Miles on the road take a toll on equipment, especially when races are back-to-back, and attrition of battle-tested parts is unavoidable. Larson explains that without the support of companies and sponsors, stretches like this are next to impossible. While Larson tunes, drives, and performs maintenance, Greg Sanford, owner of Pro Rolloffs, owns the engine in the Cadillac.

In Season 2 of No Prep Kings (pre-Covid), Larson was averaging $5,000 in expenses per race — which he knows is on the low side for the series.

“Having Greg on board has been incredibly important to this program. I couldn’t do this without him,” notes Larson. “I’ve got teammates who cover transportation expenses for their teams, drive full rigs and toters and fly out to the races. I can only imagine what they spent for each race.”

Companies like DEFCO Trucks and X Insurance understand the financial toll and see the opportunity available through the series. 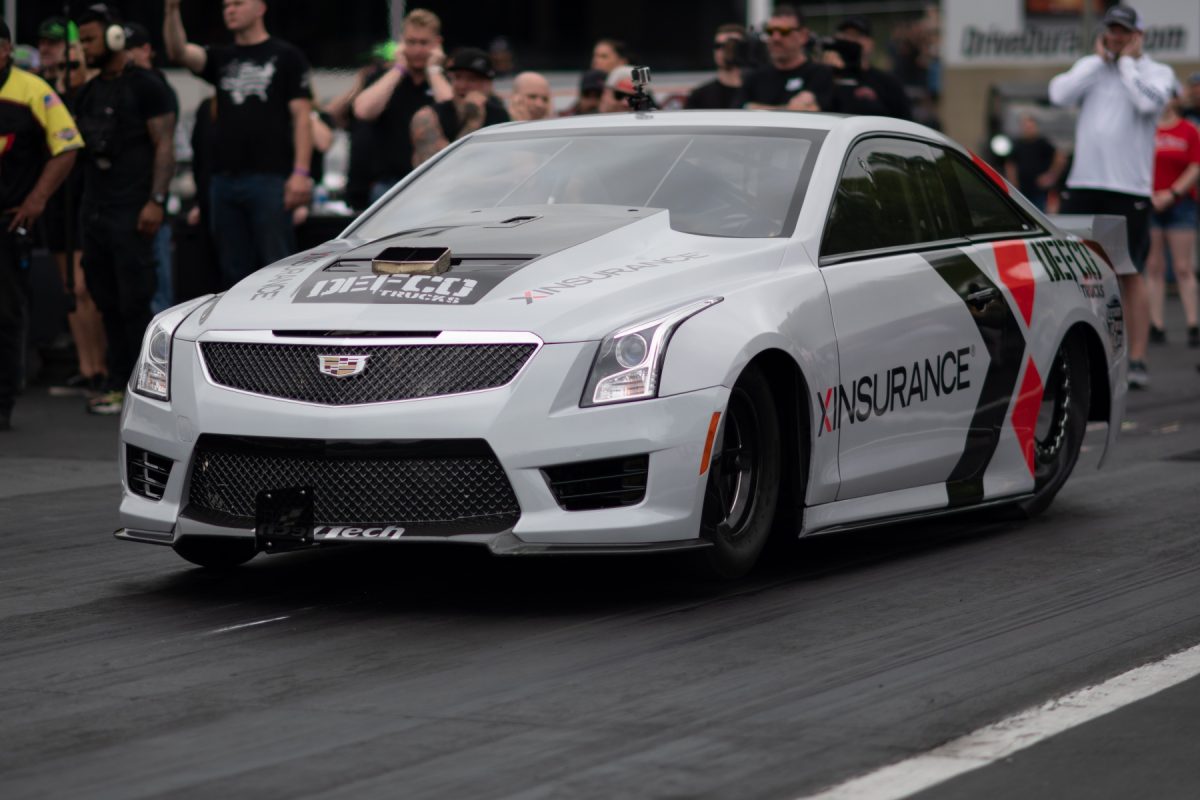 “They see the number of people we are able to reach, the fan bases we all have, and want to help us continue to compete and put on a show for those fans,” says Larson.

The Larson Race Cars/X Insurance/DEFCO Cadillac still sports a 140mm, single turbo combination, but Larson plans on upgrading the power-adder when the Harts Charger is released; it is a centrifugal supercharger from the racer’s turbo supplier, Harts Turbo. In a recent video on his quickly growing YouTube channel, Larry discusses the benefits of switching to a supercharged combination as many other racers have done for this season.

“Durability is the biggest challenge for the blower cars right now,” explains Larson. “I know Dustin and Brandon (Hart) will be able to bring a competitive product to market and I’ll be ready to run it when they do.”

Most recently, Larson entered the Outlaw Big Tire class in Epping, NH, after being eliminated from the invitational class on Saturday. Outlaw Big Tire is open to any racer regardless of car type, weight, or wheelbase.

“The class offers those of us who go out first round an opportunity to gather more data or fix any issues we’re having with the car,” says Larson.

After making slight changes following a loss to Dean Karns in round one of the Invitational, the Cadillac was making strong A-to-B passes in Outlaw Big Tire, and Larson went on to park the Cadillac in the Winner’s Circle that evening. 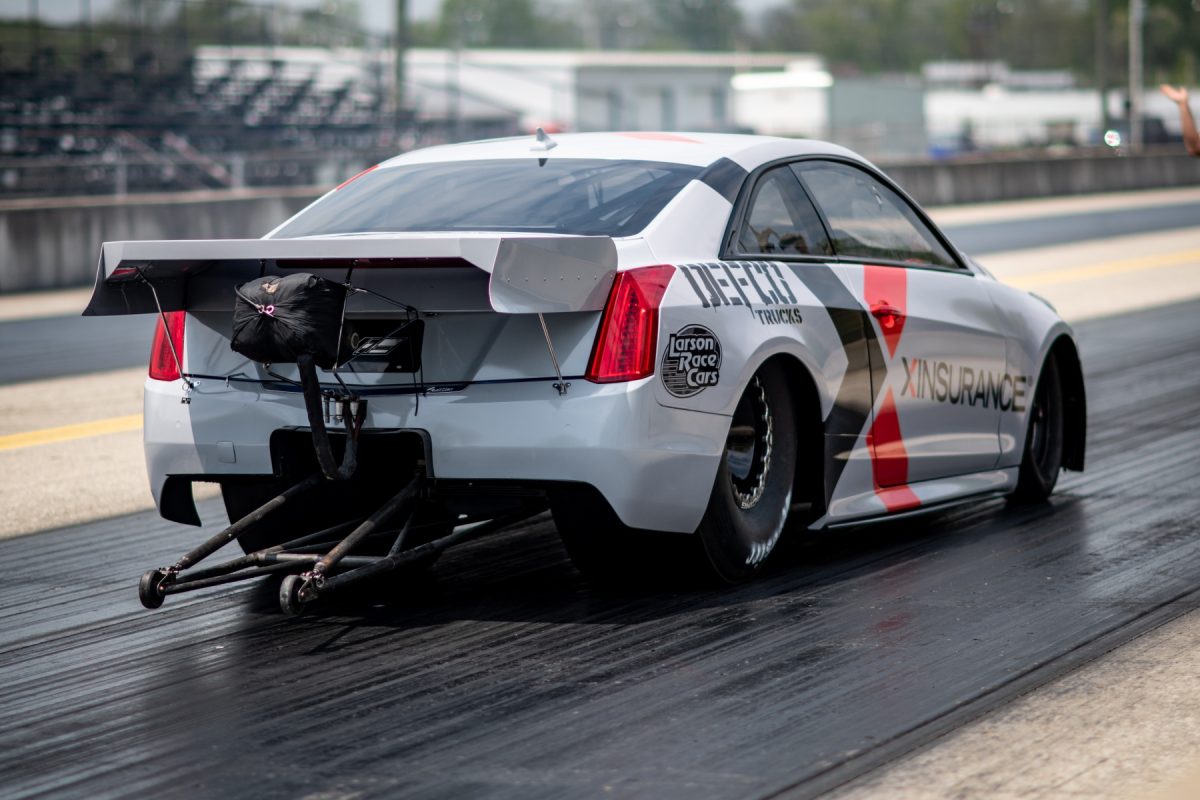 “We’ve got the car happy now and got it figured out,” says Larson. “I never really worry about who pulls up next to me. My strategy is to race the racetrack and continue to rack up points and finish strong this season.”

The series’ next stop is at National Trail Raceway in Hebron, OH on June 3–4 before heading to Beech Bend Raceway Park, June 10–11, 2022.