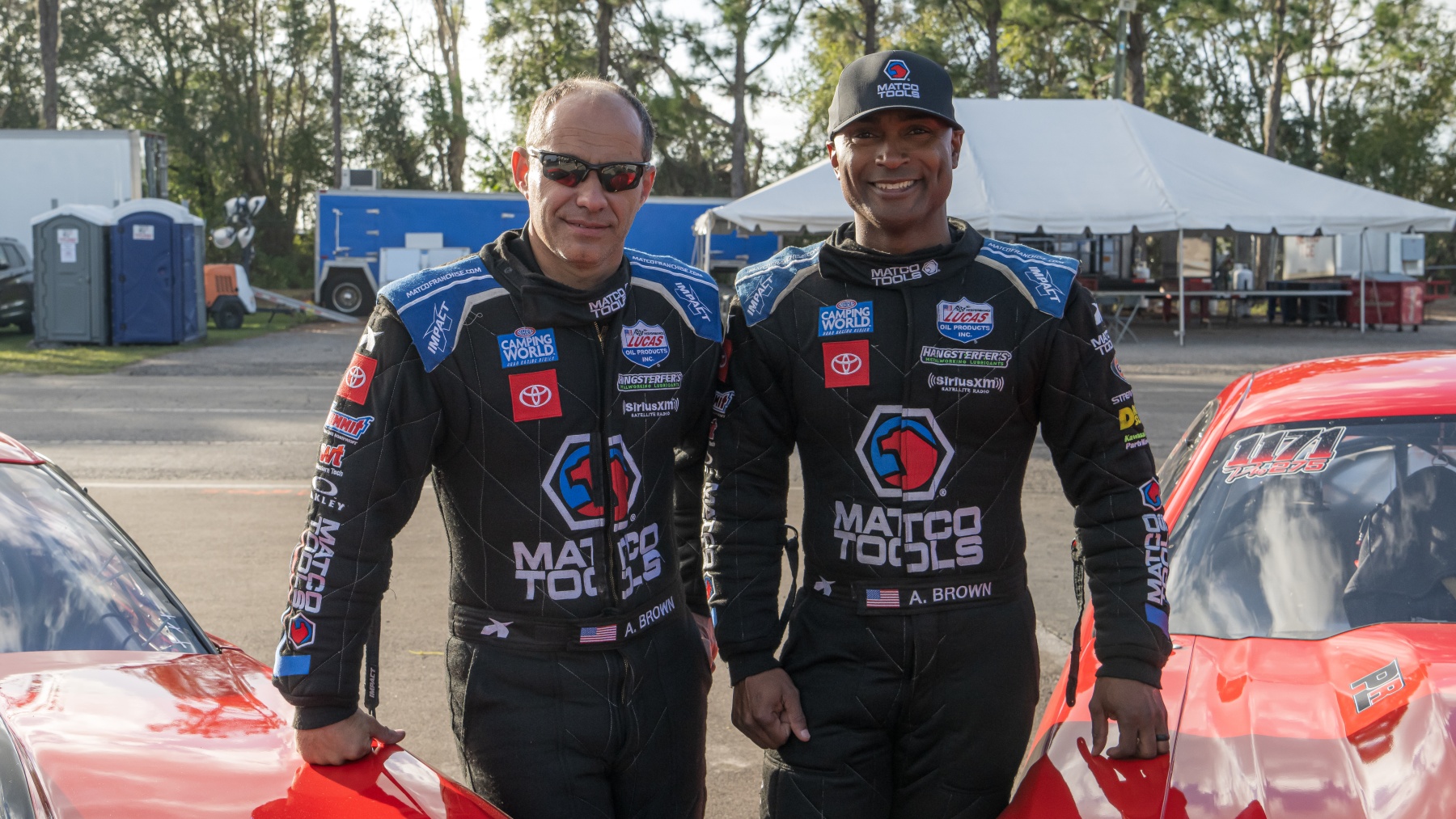 Three-time NHRA Top Fuel world champion Antron Brown and drag radial star Manny Buginga race in very different worlds. But thanks to a mutual friend, their worlds are coming together this weekend as Brown has signed on to drive Buginga’s Pro 275 Mustang known as “Fred” at the 51st annual Snowbird Outlaw Nationals at Bradenton Motorsports Park.

After years of hearing about each other through mutual friend Carlo Catalanotto, Brown and Buginga met at the PRI Show a few years ago when “Fred” was on display. The two have become friends since then, bouncing ideas off each other and trying to figure out a way to combine their two different worlds.

While they race in different circles, the two drivers have a mutual respect for each other and for the classes they compete in.

“When you meet serious racers, they just got that ‘want to’ that you can see it in them that they’re going to be the best,” said Brown, who launched his own team for the 2022 season. “Not just ‘want to be’, they’re doing all the necessary things to be the best. I noticed that right away about Manny, just the way he carries himself and his attitude and the way he’s just on point.”

“We’ve just been bouncing ideas off each other,” Buginga added. “Antron is on the other side of the spectrum where it’s 330 mph. You’ve gotta respect that. The man’s talented. We took some of his ideas and bounced ideas off each other and they work.”

Between the two drivers and Catalanotto, a plan was hatched to put Brown behind the wheel of “Fred,” Buginga’s Jamie Miller-tuned, ProCharger-boosted Mustang in Pro 275 competition at the Snowbirds.

“Carlo is like a brother to me,” Buginga said. “He brought us together and I asked him if he thought Antron would drive a radial car. He’s like, ‘Hell yeah, he’s into that. He loves racing. He’ll drive anything on two wheels and even one. Let’s make it happen.’ So we started talking. The Snowbirds is the first race after our [FuelTech Radial Outlaws] championship hunt, where we finished second. We put it all together. I just think it’s great for the sport to have a person of Antron’s caliber over here in radial racing with ‘Fred.’”

Brown made two test passes on Thursday, posting a best of 4.42 at 120.98 mph shutting off early. Buginga was immediately impressed with how quickly Brown took to the car.

“I’m very thankful for him coming out and putting his time into it,” Buginga said. “I can’t speak highly enough of him, how quickly he’s picked up on it. There’s no trans brake in a Top Fuel car. He picked up staging, bumping in. He did everything to the T like he was supposed to. I can’t say enough good things, what he brings to the table with kids and media and just being a humble person. I just can’t say enough about him. I just think it’s a great thing for us.”

Brown has operated in the polished, corporate world of NHRA professional drag racing for the past two decades, first in Pro Stock Motorcycle and most recently in Top Fuel, but he’s kept up with outlaw radial racing. He had a respect for the discipline from afar, and that’s only grown through this experience. 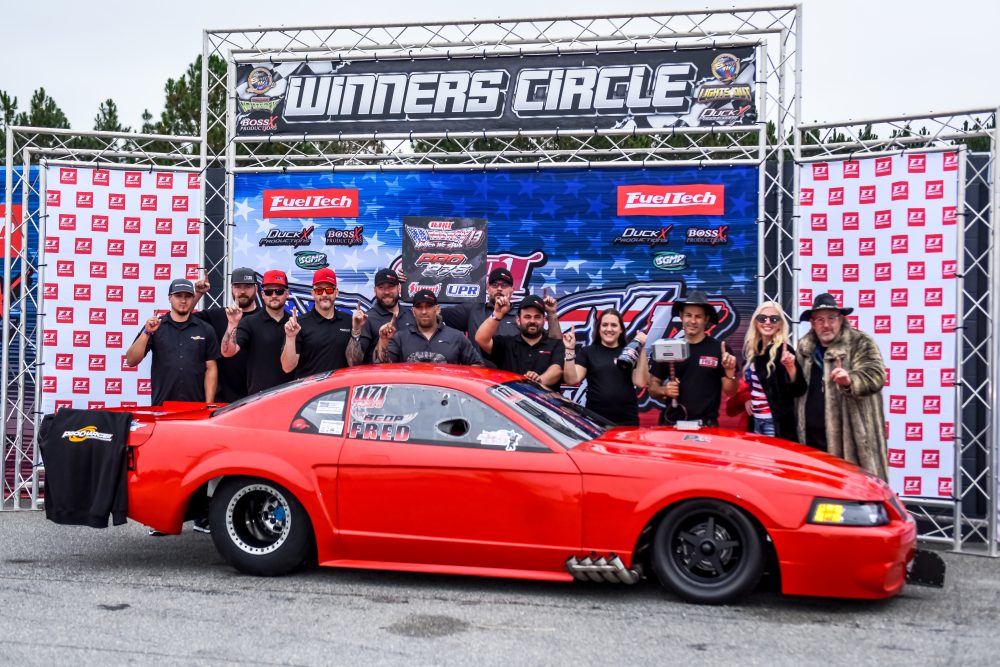 “Fred” is fresh off a win at No Mercy 13 with Buginga behind the wheel.

“Of course, my car has a super-long wheelbase, this is a lot shorter wheelbase, but the respect level is the same,” Brown said. “These cars are no joke. I always had a respect for it until you sit in it. When you get up close and personal and you see these radial tires on the back, I call them a Jr. Dragster tire on steroids. And on top of it, you throw a 3,500-4,000-horsepower engine in front of it. That’s a whole different ball of wax.

“When I got in there and did the burnout, everything is the same on the rate of acceleration,” Brown added. “The car takes off, it’s hauling the mail. You’re talking about a car that will still do .900 60-foots. The car is almost as quick as a Funny Car to 60 foot. We’re like a tenth off on 60 foot.”

In just two passes, Brown has noticed more than a few similarities between driving his Top Fuel dragster and wheeling Buginga’s Mustang. He appreciates the level of car Buginga put him in, and he’s taking his time getting comfortable in the seat and learning its limits.

“The technology and the rate of acceleration these cars have to work with, it blows my mind,” Brown said. “I always respect every different aspect or discipline of drag racing – always have. Love it because everything is different. But these just break an entirely different mold. I think it’s pretty cool to mix both cultures because Top Fuel racing, Manny doesn’t realize, he’ll do great in the fuel car because there’s so many similarities where you have to respect this. If it gets out of shape, you lift and come back to drive another day. It ain’t no hero out there. Once it gets out of shape with that type of power on that type of tire, it ain’t coming back.

“So for me, I have that respect and discipline to get used to. I’m just amazed the way that thing accelerates. I feel like I’m in my fuel car. Everything you have to be smooth and fluid. I’m just trying to learn and do it right.”

The radial racing newcomer has attracted extra attention to the class and to the Snowbirds in general. Mainstream racing media outlets have picked up on the happening, and there’s a buzz around Buginga’s pit as fans and media members hope to get a few minutes with the three-time Top Fuel champion. Brown has meshed well with Buginga’s all-star crew, and he even brought along Top Fuel co-crew chief Brian Corradi and car chief Brad Mason for the experience to fully combine the two worlds.

“It’s a different feeling and I’m excited all in the same,” Brown said. “It’s going to be good to mix both cultures together. Even though we’re all drag racers, this culture over here is so much different than our NHRA culture. I think we just need to mix both of them together, and hopefully this is the start of that to go forward.”

Brown isn’t sure what the next step is in his radial racing journey after this weekend, but he did hint that this won’t be the last time you see Brown and Buginga pair up.

“Time will tell,” Brown said. “This is still brand-new. We’re like family. But we’ll see where it takes us. We don’t want to say ‘Hey, this is what we’re going to do’ then it doesn’t come to fruition, but you’re definitely going to see a lot more of both of us in both worlds.”