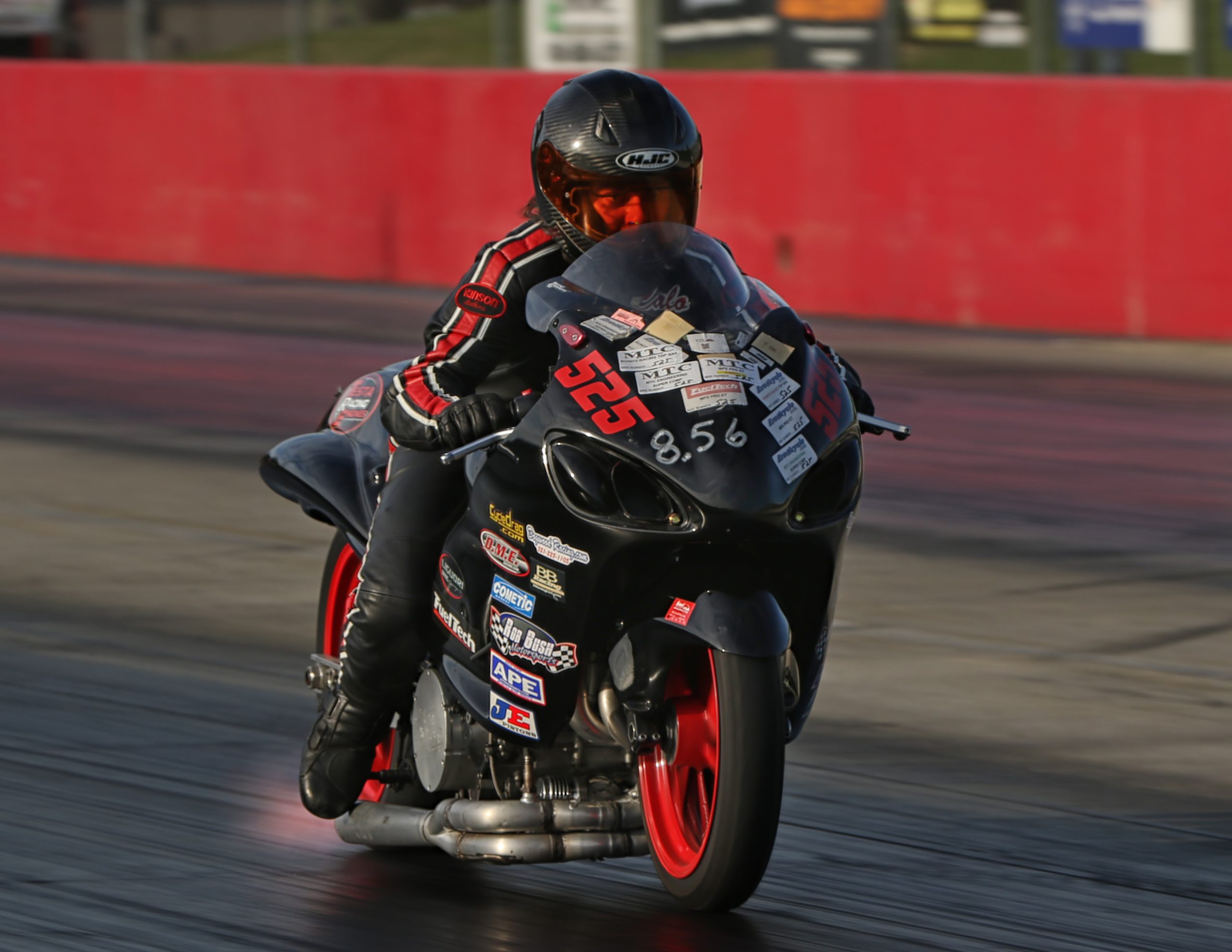 “I love the three races in one weekend,” said defending two-class champion Jeremy Teasley. “Because you normally mess up, so you got two more shots. But I ended up winning the first day over my buddy Dave Page. We left together, then his bike had problems.”

Teasley actually had a small .018 advantage over Page at the tree in Friday night’s Schnitz Racing Top Gas 8.20 all-no-bar Shootout final, and was able to cruise across the stripe when Page’s Suzuki Hayabusa went off song at 1000 feet.

“It was a good weekend at the track seeing everyone,” continued Teasley. “The weather was perfect and (NHDRO owners) Brian and Niki Welch did a great job.”

The event also served as a celebration of life for Page’s wife Rhonda, who passed away May 5thafter a courageous battle with cancer. Rhonda, you are missed. 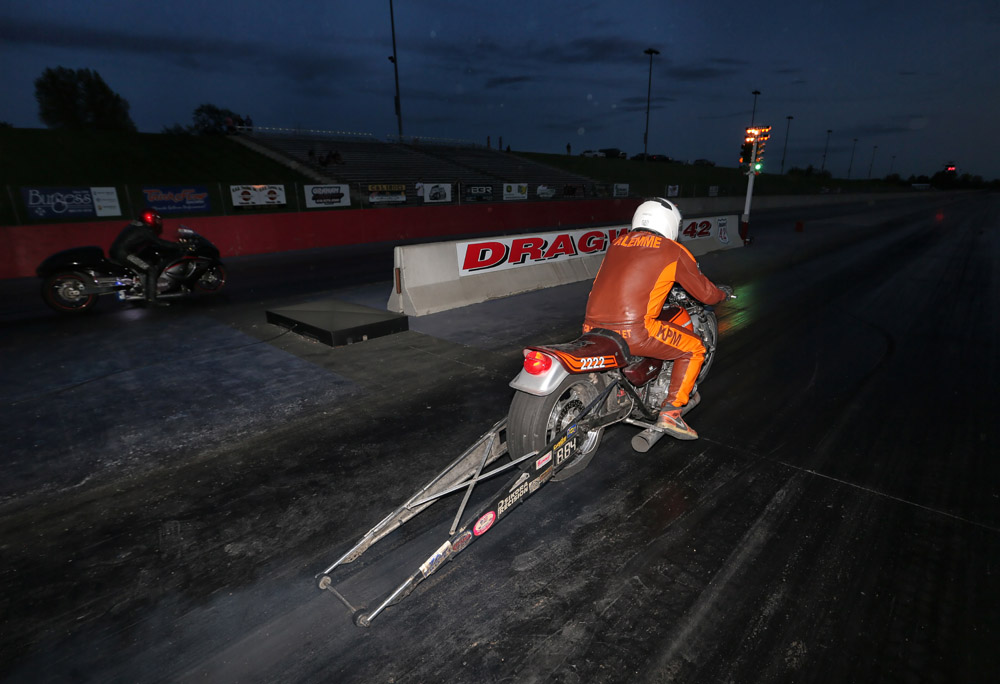 Tom Klemme and Jeremy England ran an awesome wheelie bar (Klemme) vs. no-bar Box Shootout final. In his new root beer and orange leathers, Klemme took the tree by a scant .004 on his matching KZ900 and ran .004 over his 8.84 dial-in for the win.

The No-Box Shootout also came down to a wheelie bar vs. no-bar final, and was also won by a Klemme—Tom’s bother Joe. He faced Teddy Thompson, usually known for riding a slow streetbike to considerable bracket racing success. On this occasion, however, Thompson was riding a piece with a 9.52 second dial-in. He took the tree with an .011 against Klemme’s .058, but broke out while Klemme won dead-on with a .007.

“The win Friday night was great, especially since as a team my brother Tom and I won two of the three shootouts that we entered,” said Joe Klemme.

“The rest of the weekend wasn’t quite as successful (for us). There is some very tough competition out there. That is a good thing and that’s what keeps us coming back.

“As far as the three races in one weekend, I think that is a no-brainer. All the other expenses remain the same. The second and third races are expense free besides entry fees and race vehicle maintenance.

“As always I would like to thank our team KPM: Tom Klemme, John Mealy, and Tim Genung, for everything they do.”

The NHDRO Road Course (instant green, no-time class with road course requirement) final was close for a moment, as a mere .003 separated Carlo Testa and Justin Hodge at the tree. But after that it was all Testa, who took the win by a wide margin.

“It was such a great weekend,” said Testa. “I’ve invested a lot of time and effort, not to mention all the money, into my craft, and the education I’ve received has come by way of all the lumps I’ve taken along the way. I’ve been going to a Dragway 42 since I was in diapers, so it was extra special this past weekend when I got my first win at that race track.

“I knew going in I had as good a chance as anyone of winning the Road Course Shootout. The bike has been so incredibly reliable and consistent for the past four years that I felt I could lean on it a little bit harder and give heads-up racing a shot. It made my job much easier knowing all I have to do is line up straight and cut a light, and the bike will make a clean A to B pass damn near every time.

“I was very lucky to have the help of a great group of teammates: Nino Zana, Joey Brandgard, and Jerome Gordon. Without them I might even forget to put fuel in the bike.

“I want to thank Brian and Niki Welch and family for their hard work and commitment to us racers. Their events are ALWAYS first class. Without folks like the Welch’s, Man Cup’s Jay Regan, and SDBA’s Sonny Vick, motorcycle drag racing wouldn’t be where it is today. Thank you also to Ron and Mary Anne Matcham, and their entire staff for such a great race track. They really make me feel like family every time I’m there. I’m hoping this is the first of many wins to come at my home track, Dragway 42.”

Testa and his no-bar ‘Busa went on to runner-up in Saturday’s Top Gas final against Bradley Shellhaas and his wheelie bar Kawasaki. Shellhaas took the tree .022 to .047 and went unchallenged from there.

“I was fortunate enough to have several family members travel there to watch this weekend, so those wins always feel more special,” said Bradley. “It also was my son’s ninth birthday, so he provided me with the luck when I needed it. No winlight was possible without my dad (Brad) building the most reliable and consistent antique that a rider could ever ask for. That bike makes my job easier and myself more confident than I ever should be on the track.”

“This weekend was a great start to the season for me,” said England. “I showed up Friday with my new bike and I hadn’t had a chance to use the nitrous much this season. So Friday morning, me and David Ligouri worked diligently to make the bike happy using nitrous, and within a couple runs it was working great. So I took a swing at 8.20 and went 8.177 at 179 mph.

“I left that tune alone and used it all weekend. It ran 8.16-8.18 all weekend long. This is my first no-bar Top Gas bike and I couldn’t be happier with it, showing up and winning the first weekend out. With a runner-up Friday in the Box shootout, 9.30 semifinal on Saturday, Pro ET semi and the Top Gas win on Sunday, I feel pretty good about my performance.

“I have the FuelTech plug ‘n play harness from David Ligouri and Ryan Schnitz, and man has that turned out to be a phenomenal system them guys created. I owe a huge thanks to David for his efforts with my motorcycle, Dave Page for building me a top flight engine every time, Marcus McBain for a killer shock combo, Dustin Lee for unbelievable clutch support, and Tim Hailey for being here with excellent coverage of the event.

“The next NHDRO is in my backyard at Edgewater Motorsports Park and I cannot wait to be there.”

Jeremy’s brother, Andrew “The Big Island” England, gave up .028 at the tree but still pulled out Saturday’s MPS Pro ET win against Perry Sowers in the final.

“Was a blast like always,” Andrew said about his weekend. “My first big win in the NHDRO and I was super pumped about it. Could not have done it with out the help of my dad Butch, my mom Anita, and my bother Jeremy. Had a hard road to get there, a lot of .00 stripes. Just lucky it fell my way.” 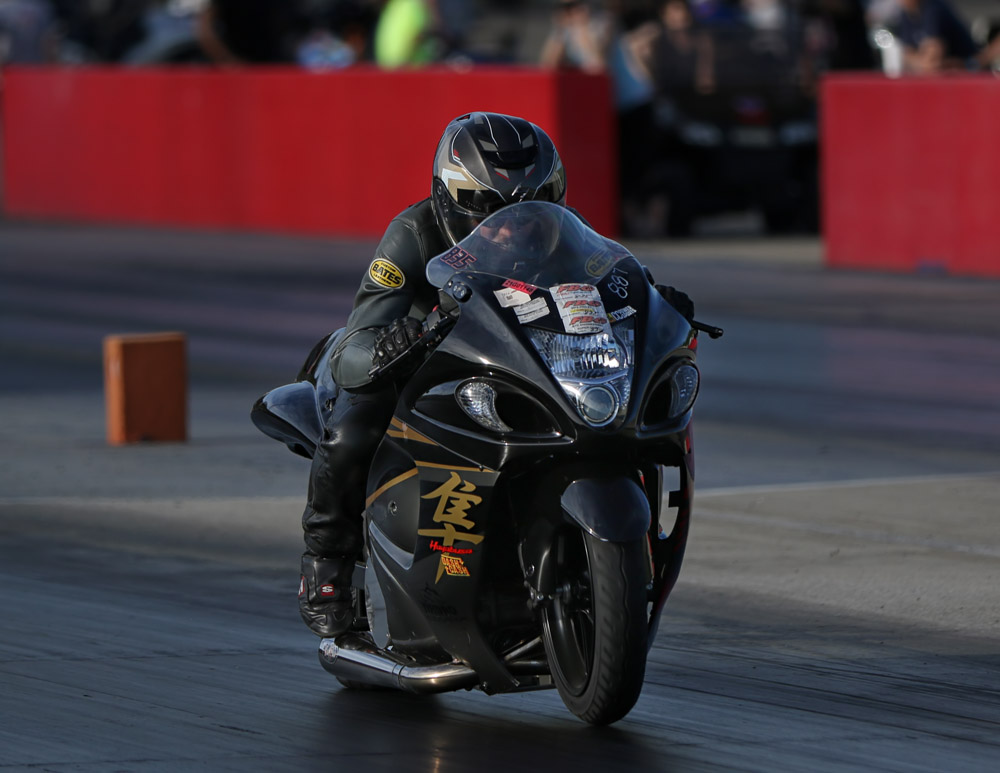 Not that he needs much luck, but Greg Mallett received heaps of it on Sunday. Kyle “Dolemite” Dolamore redlit by -.003 in the MPS Pro ET final, and David Beshara made it even easier for Mallett in the MTC Super Comp final when his bike pulled through the beams on the 2-step. That made for two wins for former Top Gas champ Mallett.

“Being the first race of the year for me, I really struggled Friday and Saturday,” said Mallett. “My lights weren’t consistent and I wasn’t riding well. I knew I needed to improve on Sunday or I’d be going home early. I worked a little harder, had a few lucky rounds, and things fell into place.

“It’s always helpful to have Dustin Lee, David Liguori, and Dan Rudd help me with my program. Those guys are the best at what they do!

“Dragway 42 is a great facility. I always enjoy racing there. Brian, Niki, and their crew do a top notch job at every event!”

Saturday’s Quick Street final was a true battle of titans—White vs. veteran rider Big Joe Holt. The champ’s .015 advantage at the tree was pretty much all he needed, as both bikes ran 8.73s to give White the win.

Sunday’s QST final was like a replay for White, but with a different bike and rider in the other lane. Eric Yost gave up .024 at the tree, ensuring another White win when both bikes ran 8.77s.

“It was awesome to just get out there and have fun with family and friends!” said 20 year-old Moll. “The bike was super consistent every pass. I knew as long as I kept cutting a good light then I would be able to make it rounds. I also couldn’t have done it without all the help from Crow and Jeremy Teasley. They’re awesome, always there to help out when I need it!”

Jim Swanger grabbed an .044 advantage at the tree against Justin Blackford to give himself some easing room at the stripe for Saturday’s Advanced Sleeve Dirty 30 win.

“I’ve been following NHDRO since 2010, have been in many finals and semifinals, and have been number one qualifiers in several events, and this is my first win,” said Hall. “Been a long time coming. My goal was to win one of these races with a THC (True Hand Clutch) bike, and I finally did it.

“I would like to that Dave Page for building my motors throughout the years. If it wasn’t for him this wouldn’t be possible. He takes care of us at all costs. Would like to thank my son Jaden Hall for all the hard work and countless hours helping me work on these machines. And would like to thank Brian and Niki Welch for providing us with the series and continuing to put on the events for us to race in the Midwest. And of course, would like to thank the man Tim Hailey for the amazing photos and awesome coverage!” 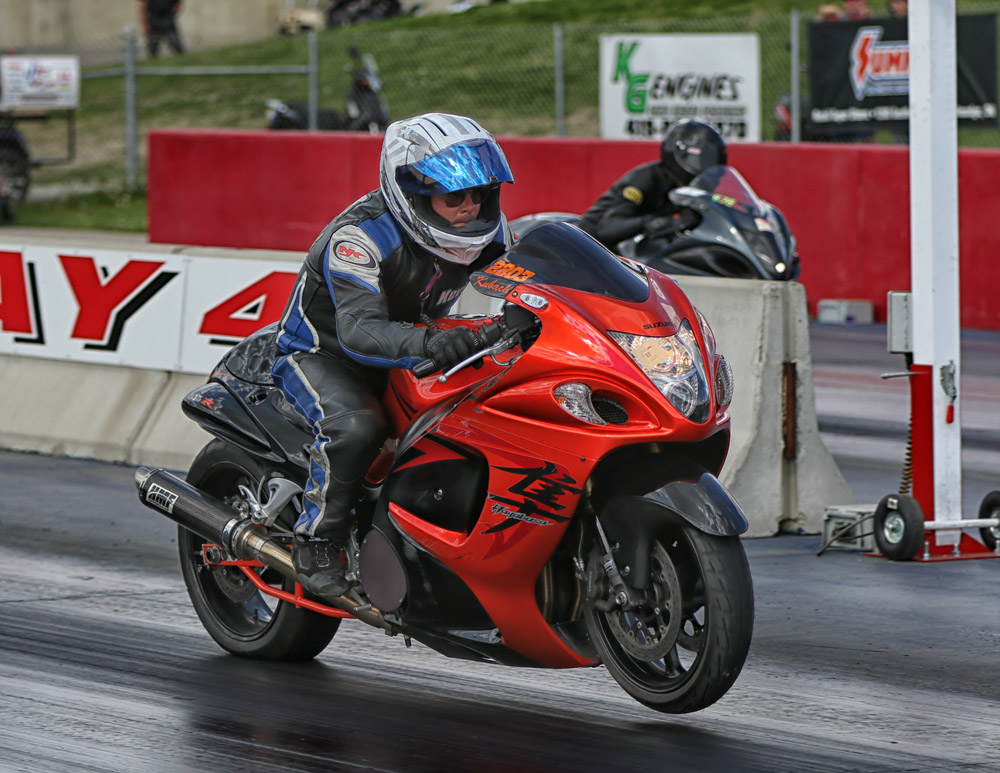 Kevin Adams didn’t find the Friday success he was looking for but came through on Saturday for the Kevin Dennis Insurance Street ET win. Kevin’s 9.32 dial-in had to wait over three seconds on Jim Messing’s 12.55, but Adams did his job well with a .126 advantage at the tree that virtually secured the win.

Cincinnati’s Jay Hunter had an easy Street ET final round on Sunday when opponent Josh Costa redlit by -.012. “The track was great, the crew was real good, can’t wait till the next one,” said Hunter, a man of few words.

Riding his dad Ryan’s turbo ‘Busa, Trevor Schnitz was able to win Pro Street on what is essentially a well-tuned Top Gas bike. Schnitz took the tree with a sharp .013 and breezed to a 7.74 at 183 mph win while final round opponent Rob Aston spun in the other lane on his proper PST turbo ‘Busa.

“It was surreal,” said Trevor. “It was not only great to race in the class, but to win the class felt like a dream. I had a lot of help from many amazing people, the most important being my dad and grandfather (Dave). They have helped me grow and become a great racer. Trust me, this is just the beginning.”

VooDoo Grudge was seriously curtailed when heavy showers shut the track down for the night just before dark on Saturday night.

Pro Ultra 4.60 fell short of the number needed to run the class, but champion Dan McCarten won a run-off against Heath McQuinn.

Niki and Brian Welch are excited about the #NHDROohiosummer and are looking forward to seeing every member of the NHDRO family at the APE Raceparts Summer Reunion at Edgewater Sports Park just outside of Cincinnati on July 15-17.