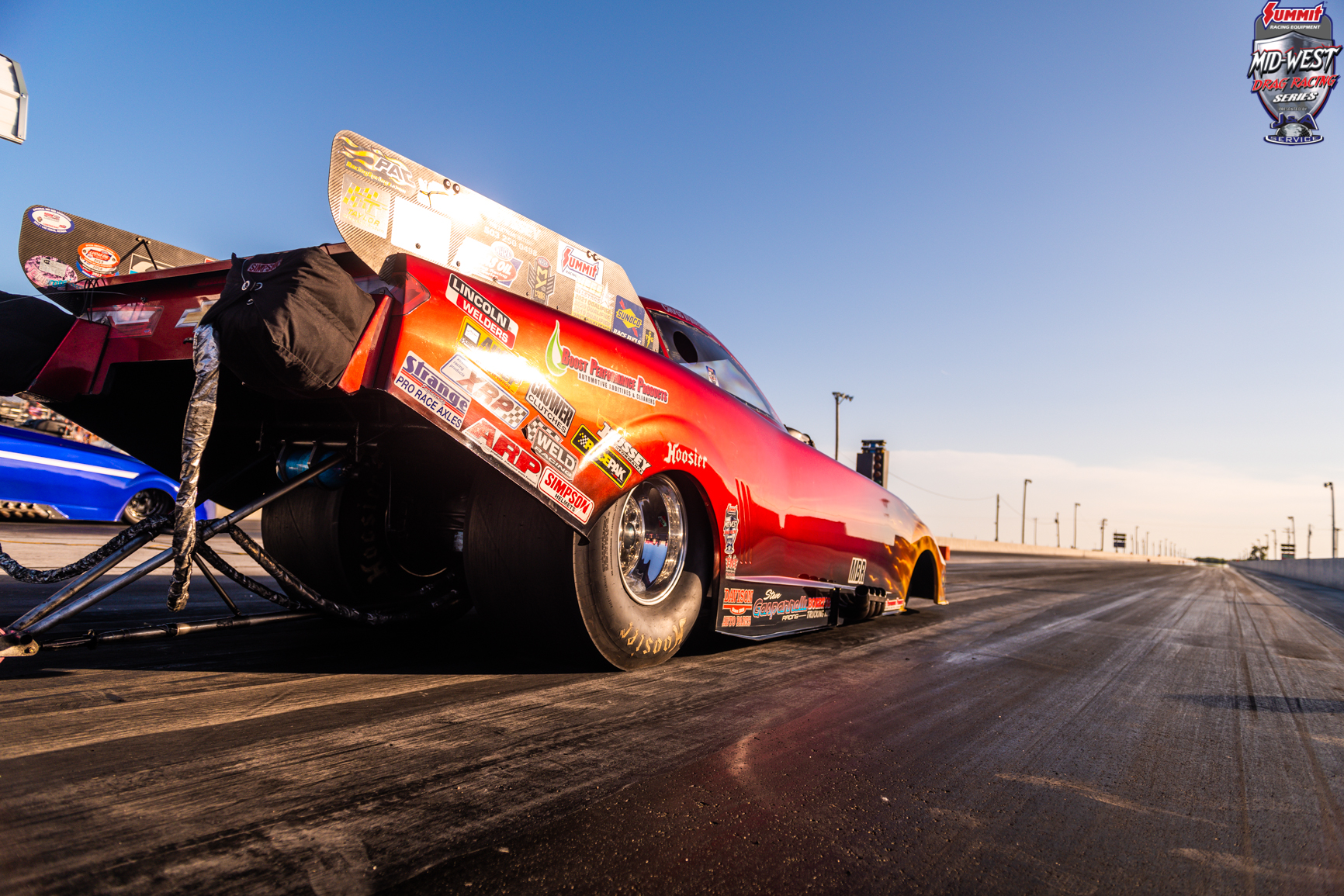 It’s been nearly three months since the Summit Racing Equipment Mid-West Drag Racing Series presented by J&A Service last raced, so the all-eighth-mile series is recharged and ready to put on a show at US 131 Motorsports Park for the track’s 18th annual Honor Credit Union Funny Car Nationals, Sept. 9-10. It’s the sixth race of an eight-race season for the series, which includes headlining pro and sportsman classes.

“It feels like it’s been forever,” said Keith Haney, founder, MWDRS. “Our racers even feel like it’s been forever. But the good thing is people got to spend time with their families and concentrate on work. It’s kind of like a little break to recharge and revamp your program or stock back up because parts are hard to get. It’s a combination of things that make the time off great.”

“We’re excited to head to Martin,” said Haney, who also competes in Pro Mod. “Jason Peterson and the staff there are absolutely, hands-down amazing. We can’t thank them enough for bringing us in and making us a part of their show. I think they had over 15,000 people in the stands last year. We can’t wait.”

“A lot of the points leaders are all showing up,” Haney said. “It’s a long drive for some of our people on this side of the country – Oklahoma and Texas – but most of them will make their way there. We also have a lot of newcomers coming – a bunch of them. It’s going to be fun to see some newcomers who want to come race with us.”

The series will have a wider audience at the Martin event, as it’s the first race since the MWDRS livestreaming partner, MAVTV Plus, joined FloSports. Now, all FloRacing subscribers will be able to watch MWDRS events through their accounts on smart TVs, streaming sticks, and the FloSports app for smartphones.

“Having MAVTV and Flo join together is a great opportunity for not only our marketing partners, but our racers,” Haney said. “Their platform sees millions of people across the world.  Having them on board and being a part of their drag racing side is going to be fun. It’s still MAVTV, it’s just MAVTV on FloRacing.

“A lot of people don’t know we have our own livestreaming equipment, so we send the feed to MAVTV and FloRacing,” Haney added. “It’s still Al Tucci and Luke Clevenger on the mic. We’ll actually have MAVTV and their big production truck back with us at the World Finals to cut the last TV show for the last half of the year.”

Jimmy Boles, the MWDRS track prep manager and race director, will miss the US 131 race due to obligations back at Osage Casino & Hotel Tulsa Raceway Park, so reputed track prep specialist Jimmy Bradshaw was tapped to fill in for this event.

“We’re excited to have Jimmy on board,” Haney said. “He works real close with the guys at Martin. Samuel Peterson [son of track owner Jason Peterson] is a great kid and those two work great together. They have a great working relationship. The track prep should be on point as always. He’ll be there ready to go for Thursday testing and he’ll stay with us throughout the event.”

Another development over the midseason break was the decision to make the fall Throwdown in T-Town at Tulsa a double event. Before starting the Throwdown race, the series will complete eliminations from the MWDRS Great Bend Nationals. The Great Bend race was postponed following a crash in qualifying that claimed the life of Pro Mod driver Ronnie Hobbs.

“The qualifying fields are set in all classes,” Haney said. “We’re working on the schedule now, but each racer will get one hit at the track and we’ll go racing for that event, then we’ll go into the Tulsa event. We’ve done it before. Starting at Martin, there’s basically four races left in the season, so a lot can happen.”

MWDRS teams will have the opportunity to test on Thursday and Friday, with qualifying set to begin at 6 p.m. Another session is scheduled for 8 p.m., while qualifying will conclude with a third session on Saturday morning. Opening ceremonies and pro eliminations will begin at 3 p.m.