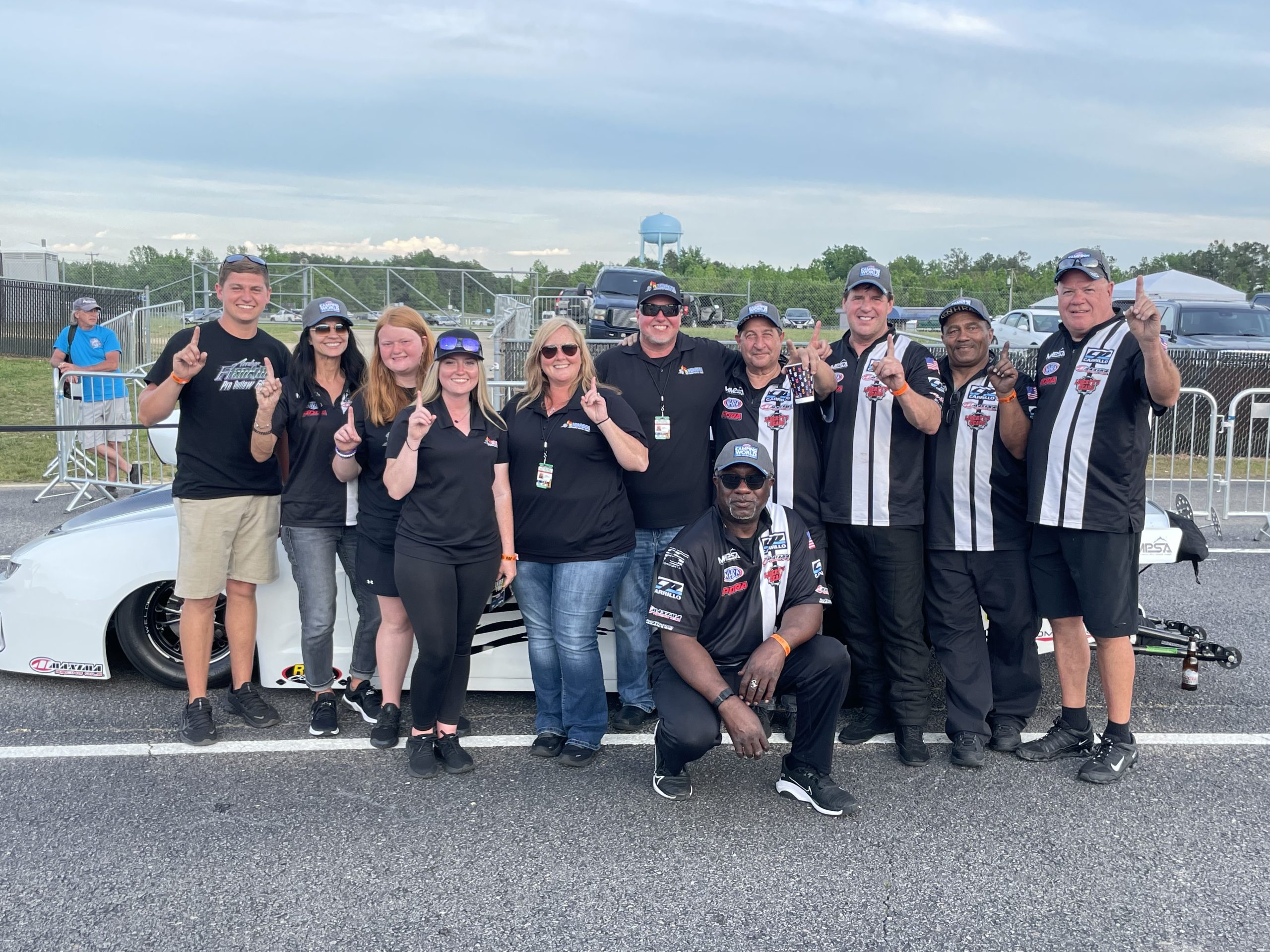 Story and photos by Courtney Enders

It was the first appearance for the 825-cubic-inch, naturally aspirated, Mountain Motor Pro Stock cars on the NHRA circuit last week, and the performance lived up to the anticipation of their debut. Grade A Quality Energy Shots sponsored the eight-car field in their first of four stops on the Camping World NHRA Drag Racing Tour with greats like John Force, Steve Torrence, Matt Hagan and the other stars of the professional series.

Upon uncertain forecasts, the plan was to give the Mountain Motor Pro Stock cars three qualifiers before a single elimination, three-round ladder on Sunday.

“We went into this race wondering if we would actually get all three, if any, of our qualifiers in due to the rain forecast in the area,” said the former Mountain Motor Champion, Johnny Pluchino. “We actually were able to get two qualifiers in before eliminations to show these NHRA fans an idea of what Mountain Motor is all about.”

Class veteran Elijah Morton took the top qualifying spot with a 6.223 at 225.45 mph during the first session and never looked back. He not only snagged the #1 spot, but he was low of the round in both qualifiers, as well as each round of competition. This earned him the Stellar Marine ‘Pass For The Cash Award’ for having the quickest run of the weekend, which awarded him a bonus of $500 provided by Stellar Marine. 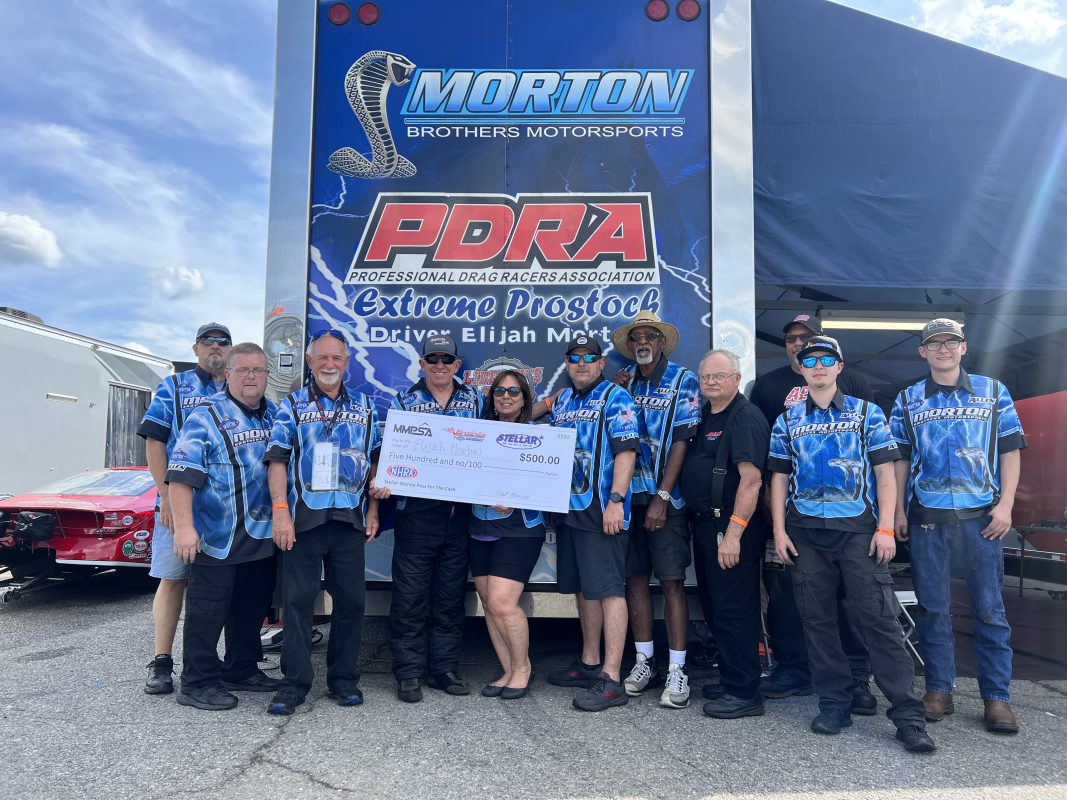 “This is great! It’s been a while, but to be number one is awesome,” said Morton after being awarded his No. 1 spot. “We have a little engine shop in Surgoinsville, Tennessee. Three members of the family work graveyard shifts, and they got here at 11 o’clock last night with that engine. They said when I leave with it, I better hold on and it showed up on the scoreboard. It feels great!”

“Mountain Motor has always had great parity in this class, but to have a Ford sitting on top gives us so much pride,” continued Morton. “This is a great family sport and we love that NHRA has rolled out that red carpet for us. I’m so proud of Mountain Motor and the show we bring to the table.”

Despite the performance domination of Morton and team, JR Carr, a two-time NHRA national event winner and four-time PDRA winner, took home the hardware after an exciting race day on Sunday.

Through eliminations, Carr was consistently just shy of Morton’s ETs, and in true Pro Stock fashion, the starting line was the deciding factor to crown the champion on Sunday. Morton left a little early resulting in a red-light, giving Carr and team the automatic win in the final round of eliminations. Regardless of the foul by Morton, Carr’s performance was consistent, fast, and competitive. Drag racing is a ‘right place, right time’ kind of sport and Carr was the last man standing on Sunday.

“Yesterday was tough. The rain, track change, everything. We just adjust. Frank and my whole crew, they are just phenomenal,” said Carr. “The NHRA, and the Franklin family were incredible as well. You guys have seen Franklins working out there all weekend. Those kids and that family are awesome and they have helped our class a lot. NHRA has helped our class tremendously as well, and we owe a lot to all of them. This one is for Jason, a long-time crew guy of ours has been sick, and this is his!”

Carr has been the guy the entire class has been chasing with No. 1 qualifying streak of eight PDRA events plus two NHRA events last year. He finished second in the PDRA Extreme Pro Stock points standings in 2021 to Chris Powers, but was undoubtedly the guy to beat. With a debut like this, he shows he’s still that guy.

“The response to and excitement for our class by the fans, the NHRA, fellow racers and everyone involved was over the top,” Carr boasted. “I’m so proud of the Mountain Motor Pro Stock Association and it is such an honor to represent such a class of Champions.”

The Mountain Motor Pro Stock Association competitors make their next stop in Norwalk, Ohio, May 26-28 at the PDRA American Door Slammer Challenge.

Their next NHRA stop for the MMPSA will be at the NHRA Lucas Oil Nationals in Brainerd, MN, August 18-21.