Matt Hagan was part of another record-setting day at Virginia Motorsports Park, making the quickest Funny Car run in track history on Saturday to qualify No. 1 at the Virginia NHRA Nationals. 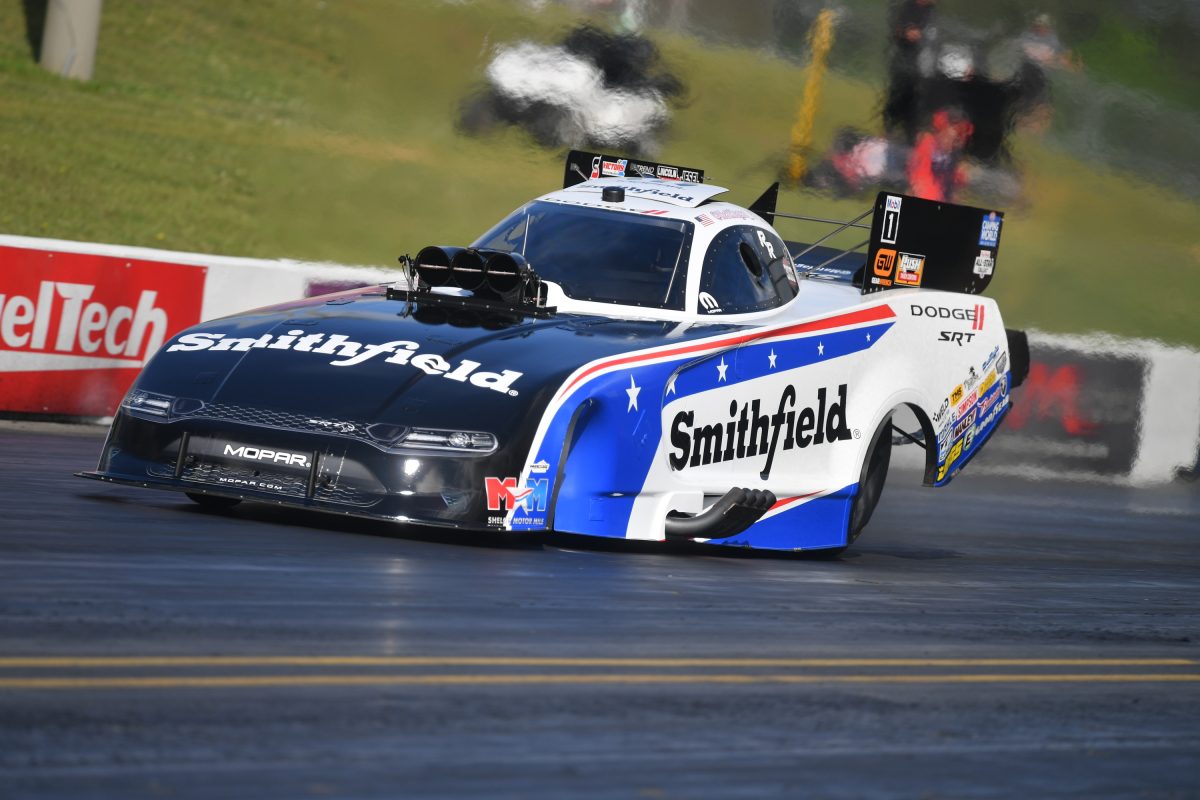 Track records were set in all three categories, with Hagan’s run of 3.853-seconds at 331.45 mph in his 11,000-horsepower Smithfield Brand Dodge Charger SRT Hellcat leading the way in Funny Car. It gives the points leader and standout driver for Tony Stewart Racing his second No. 1 spot this season and 44th in his career. This is also Hagan’s 300th career start as he looks to win for the third time in 2022 with the first-year Tony Stewart Racing team.

“What a good job by the guys at the track and Safety Safari to put a great race track underneath us so we were able to lay down a great number out there,” Hagan said. “I can’t say enough about this race car. This has probably been the best start I’ve had in my career in NHRA and (crew chief) Dickie Venables, (assistant crew chief) Mike Knudsen and (car chief) Alex Conaway and all the guys who are putting this thing together are doing a great job.

“Everybody asks, ‘How’s Tony? How’s it working for Tony?’ and I’ve always wanted to win for myself but Tony’s the type of guy you want to win for. You look at all the stuff he’s done and it’s just a respect thing. You want the dude to be proud of you. You’re ready to make things happen. This Smithfield car is just running hard.”

Defending world champion Ron Capps moved up to the second spot with a strong run during the second qualifying session, going 3.864 at 332.75. Alexis DeJoria finished third with a 3.896 at 326.95.

In Top Fuel, Force topped Friday’s track-record run twice on Saturday, finishing with a 3.654 at 333.33 in her 11,000-horsepower Flav-R-Pac dragster. It shattered her E.T. record from a day ago, giving the points leader her second No. 1 qualifier this season and 34th in her career. She’ll head into eliminations looking for her third win this season and with plenty of momentum, setting the track E.T. record three times during qualifying and making the fastest run in track history with her 335.82 blast on Friday.

“That was outstanding for this Monster Energy/Flav-R-Pac team, improving and improving and improving with each run,” Force said. “Now the hard part is doing that tomorrow (during eliminations). That’s going to be the tough one, but as long as we can make some consistent runs all day tomorrow, I think we should be in good shape. I have confidence in this team and confidence in myself in getting down this track. This is one of the best tracks we’ve been on. It’s smooth and it felt fast, so we were really happy with it.”

Austin Prock momentarily had the track record before Force’s run, going 3.672 at 326.87 to qualify second to his John Force Racing teammate. Four-time defending world champ Steve Torrence took the third spot with a 3.683 at 327.51, while Clay Millican made the quickest run of the final session thanks to a 3.698 at 325.45.

After setting track records on Friday in Pro Stock Motorcycle, Smith followed up with an even quicker 6.756 at 201.37 on her Denso Auto Parts Buell during the second qualifying session, also setting the speed record that she initially set a day earlier. The third session in the class was cancelled due to weather.

For Smith, it’s her second career No. 1 qualifier as she remains the only rider to have made a 200-mph run at Virginia Motorsports Park. She is after her first victory of the 2022 season.

“I knew the bike had more in it,” Smith said. “Matt (Smith) didn’t think it would go quite that fast, but the bike got off the line really well. I saw Angelle (Sampey) run that 6.78 and I knew this bike had it in it. I couldn’t be prouder of my team and the job they’re doing. It’s all about momentum and continuing to make good runs right now. We’re just going to keep trying to do what we’ve been doing. It’s a humbling sport, so we’ve got to continue to stay focused.”

In the FuelTech NHRA Pro Mod Drag Racing Series presented by D-Wagon, Kris Thorne took the No. 1 spot with his run of in his ProCharger-powered Camaro. The weekend’s race is powered by LAT Racing Oils. Thorne is the points leader on the strength of victories at the first two races of the season.

Eliminations for the Virginia NHRA Nationals begin at 12 p.m. ET on Sunday at Virginia Motorsports Park.