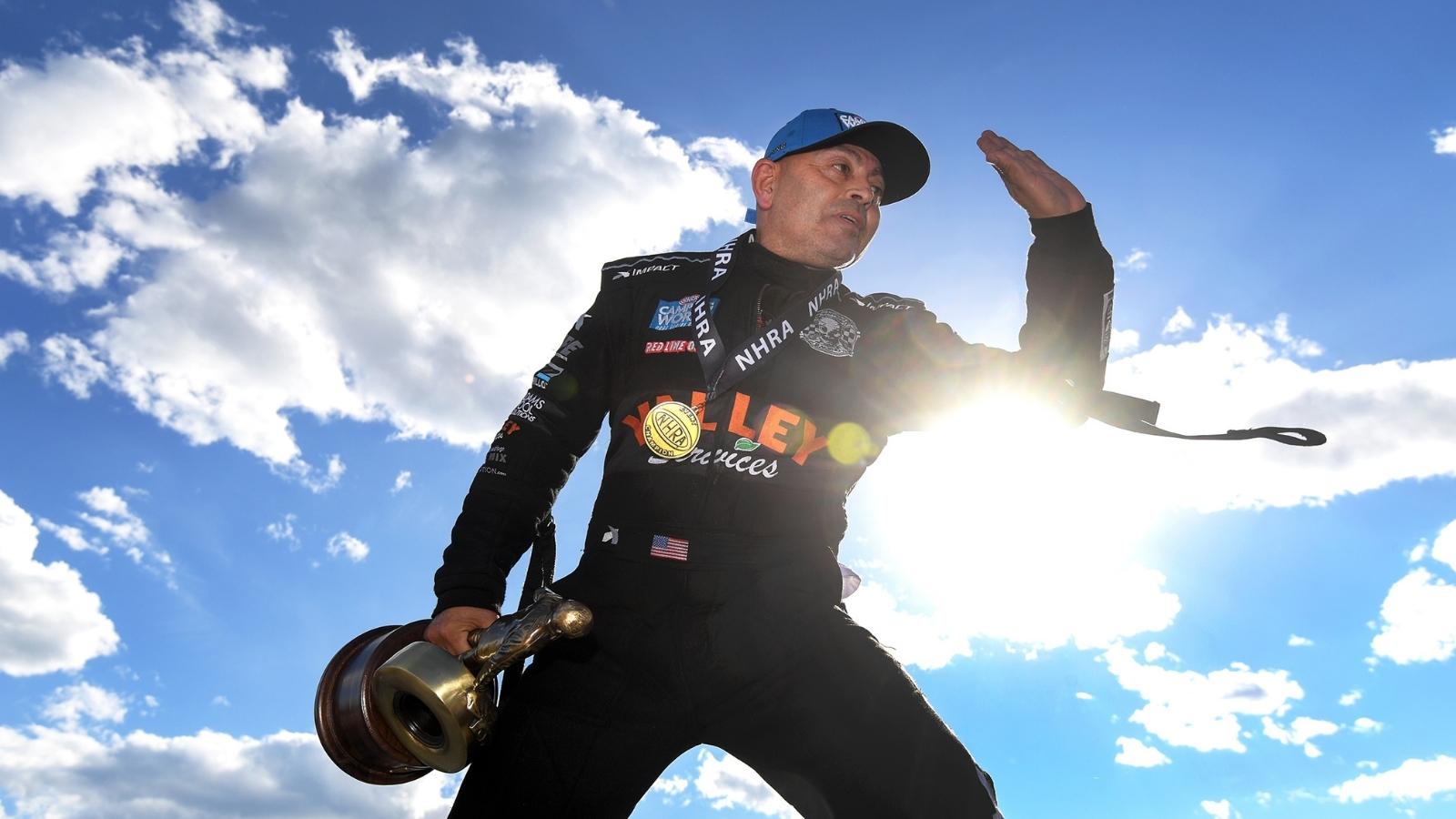 Mike Salinas is having a career year driving his Top Fuel Dragster in the NHRA Camping World Series. The California-native is number one in the Top Fuel points after three stellar wins as the series heads into the Western Swing. However, it hasn’t come without significant changes that kicked off one of the craziest silly seasons the NHRA has had in years.

During the latter part of the 2021 season, Salinas found out that crew chiefs Alan Johnson and Brian Husen were leaving Scrappers Racing to go to Kalitta Motorsports. “When Alan and Brian told me they were leaving in St. Louis, I went over and talked to my guys and told them they’re leaving. Then I asked them what they wanted to do. If you want to stay, I’ll stay racing, but if you don’t, I’m not going to keep racing.”

Salinas was ready to “hang it up and park” his dragster and figure out his next move. “I always thought the crew had been more important than the crew chiefs,” Salinas proclaimed. The pilot, who obtained his Top Fuel license in 2009, didn’t want to start over again with a new crew and guys he didn’t know. “All of them agreed to stay except one. After being at a top-tier team and watching what a top-tier team does, it’s hard to go backwards for a guy like me. I believed that when they all agreed to stay, I had the key component. All I had to do was get the key guy that could read the recipe and make it work.”

That’s exactly what Salinas did. He announced Rob Flynn would take over crew chief duties for the Scrappers Racing Top Fuel Dragster. “I spent time with Rob on a road trip to the Nitro Revival, and I picked his brain apart,” said Salinas. It was during that road trip that he knew Flynn was the guy to lead the team. “I like the integrity that this man brings to the table. I like how humble and quiet he is. He knows so much that most people don’t understand this guy, and he’s just a nice, gentle man. He wants to race but doesn’t want to be in the limelight.” According to Salinas, Flynn’s options were limited, but when he and Mike got together, they started talking about the possibility of what could happen.

“I like to find the guys that are hungry and want it, and that’s exactly what he is,” Salinas confessed.

Salinas asked Johnson and Husen to show Flynn what they had been doing and share the data they had collected from previous years. “Lo and behold, when we went out to testing, the first test session was really nice because we did not skip a beat,” Salinas said, proudly. “Alan and Brian are great guys. They tune the fastest cars in the country and have more championships than anybody else. But the thing I learned about Rob Flynn is he took all the runs and all the information and built his own runs. We’re running the car our way – not Alan’s way anymore, and the car seems to like it better, along with the driver and the crew,” he said.

Not only did the Top Fuel pilot orchestrate the changes within the team, he knew it was time to start evaluating his driving style. The 61-year-old might be old school, but he’s not stuck in his ways. Salinas found out that how he was sitting in the cockpit directly affected his driving. “Where we come from, we never ask for help,” he said. “Antron [Brown] was the first one I asked for help. Crew chiefs would ask me if I was comfortable in the car. But I never stopped to ask, ‘well, define comfortable.’ Can you see? Ya, I can see. What am I supposed to see? No one ever broke it down for me,” continued Salinas. “I was sitting too low in the car at the beginning of the year. I never saw my front wheels or the front wing of my car. I was driving the car off the wall and the centerline. It was like driving the nostalgia dragster that I started with. I was always looking at the wall and the centerline, and then it started getting crazier because we started going faster and faster.”

Like Salinas said, fellow Top Fuel pilot Antron Brown drove the Scrappers Racing dragster and conveyed his findings to Mike. “You can’t see. I’m taller than you, and I can’t see,” Salinas said Brown explained to him. “He had me come and sit in his car and tell him what I saw. I could read all the stickers down his car to the nose.”

After getting a new seat poured and custom-fitted to Salinas and his cockpit, he found out he wasn’t strapped in the car correctly. Salinas confessed that he would move around in the driver’s seat during a run. After getting his seat and belts dialed in, Salinas then turned to another Top Fuel driver, Austin Prock. “I was having a hard time pedaling, so I asked Austin a couple of questions, and he told me what he was doing. I told him if I had a son, it would be you,” Salinas genuinely said. “That kid right there is the face of NHRA, and he’s the future of NHRA. He’s a good kid and a great driver.” For Salinas, Prock’s pedaling teachings are working. “Houston was the best pedaling I’ve ever done, and that was all Austin Prock right there. I got back and was like, ‘this is cool.’”

Salinas is so well-situated in the car he admits that he drives the 330+ mph dragster one-handed. “I keep one hand on the wheel and one hand on the brake. I’m so comfortable now, it’s really awesome.” Not only does Salinas feel comfortable, but it shows in his reaction times. He’s been consistently getting off the starting line with the times of a seasoned professional.

As the NHRA rounds the corner into the second part of the season, Salinas is ready to get back in the car and continue the blockbuster season he’s been having. When asked if he’s been working on his reaction times, he chuckled, “every stop light. I beat that old lady in the van next to me off the line.” And he’s not joking as Salinas continued with his practice techniques. “Honestly, I do that. I’m having fun with this thing. I’ve never seen my name number one. It’s a big deal for our family and our racing team.”

The majority of Scrappers Racing consists of Mike’s family. Two of his four daughters are drag racers. Jianna fields a Pro Stock Motorcycle in the Camping World Series, and Jasmine is currently piloting a nitro-injected Top Alcohol Dragster in the Lucas Oil Series. However, Jasmine is looking to make the jump to Top Fuel. “We’re looking for funding for Jasmine’s Top Fuel car to bring her out next year. I’m hoping we can test the car in Brainerd, Minnesota.”

The way Salinas talks about this family and racing makes it easy to tell that he has truly found something special. “At the end of the day, where can you go and be with your family, have a great time, and live out your goals. I have four daughters, and they’re young, strong, confident women. If Jasmine wanted to drive this car and I had to step out, I wouldn’t blink an eye. I want them to be able to do what they want and have fun,” Salinas said, clearly speaking from the heart. “We’re working on getting everything ready for her [Jasmine]. It’d be nice to beat my kid, too.” Then he laughed and said, “I’m still going to jump on a Pro Stock Motorcycle to beat Jianna.”

While Jasmine is going to Columbus, Ohio, this weekend, Jianna is entered to race her Scrappers Suzuki at the Mile-High Nationals. Mike is excited to return to one of his favorite tracks and see another prominent family in drag racing. “The Bandimeres are great people and friends of ours. We’re excited to see them,” he said. As far as the infamous elevation of the track, he’s putting his trust in Flynn and his crew. “It’s going to be challenging for everybody. There will probably be one or two stand-out cars, and we’ll find out after the first round. We’ll find out if our car likes it or not. Our car loves the heat. The hotter, the better for us,” Salinas confessed.

In addition to the tuning changes, Salinas is bringing back a familiar sponsor to the mix. “Pep Boys will be riding with us in Denver, and we’re looking forward to working with them for a long time to come,” he said.

Salinas’ closing thoughts on the weekend are to stay positive and let his actions speak louder than words. “When I get on the track, I don’t let anybody get in my head. I’m playing Mike’s game. Instead of me talking about it, I’m going to show everybody,” Salinas confidently said. “When I get in the car, I have this saying before I light the second light: I’m happy, I’m having fun and whatever is going to happen is already written.”