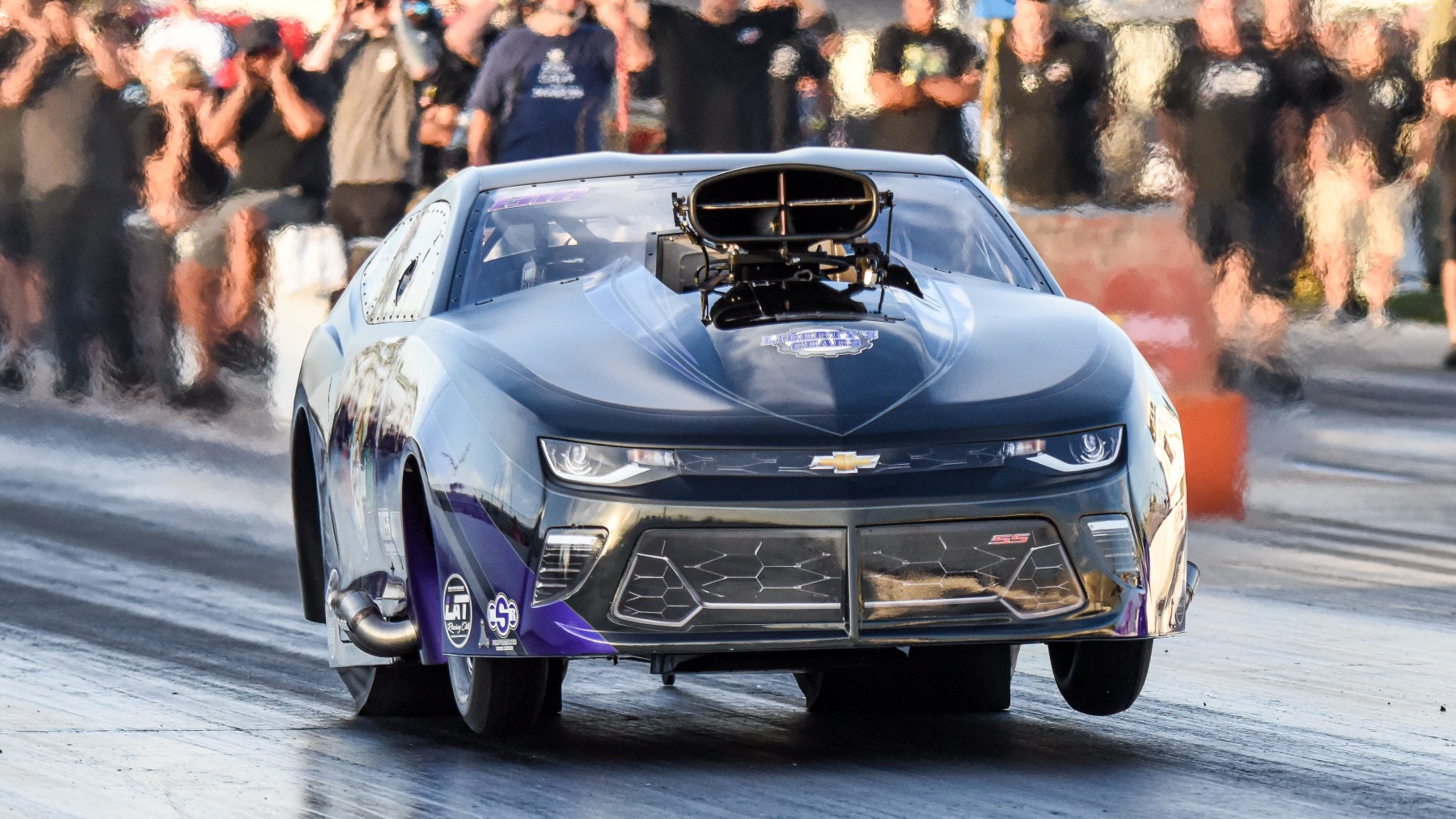 Salemi and her team had Eddie Whelan’s roots-blown Slice-and-Ice Camaro in the staging lanes for the fifth and final qualifying session, but when no one outqualified them, the team elected to sit out the run to be ready for Sunday eliminations.

“We’ve made nine test runs and four qualifiers already,” Salemi started, “so if we want to have things as fresh as they possible can be for tomorrow, we felt that if we were still No. 1 by the end of the night, we would sit it out. Unfortunately, that didn’t make for the greatest show for the fans, but I did go up there and throw out some t-shirts for the kids. Hopefully that pays off. Tomorrow morning, we’ll get up and everything is serviced already, so we’ll be ready for round one.”

Earlier in the day, Salemi recorded a 3.634 at 204.45 in the third session and a 3.591 at 205.35 in the fourth session. Between testing and qualifying, Salemi is confident her team has what it will take to go rounds on Sunday. She goes into race day as the defending event champion hoping to pick up the $51,000 check at the end of the day.

“I think it’s going to take consistency, going down the racetrack quickly,” Salemi said. “I don’t think we’re gonna have to go out there and set the world on fire every round. We’ll definitely try to get lane choice as much as we can and just make A-to-B runs. Hopefully I’m having a good day on the tree and we can get it done.”

Multiple drivers made big moves in the final qualifying session for Pro 275. Driving Tommy Youmans’ ProCharged Mustang, Marcus Birt jumped to the No. 1 spot with a 3.74 at 201.52. Three-time NHRA Top Fuel world champion Antron Brown, who held the No. 1 spot going into the final session, slipped to second despite improving to a 3.745 at 201.13 in Manny Buginga’s ProCharged “Fred” ’03 Mustang. Mike “Hollywood” Decker III moved up to third with a 3.786 at 199.64 in his screw-blown Decker’s Salvage ’19 Corvette, jumping up from the No. 16 spot.

Some of the biggest improvements of the day happened in Ultra Street, where the top of the qualifying order was completely rearranged. Shawn Pevlor fired off a 4.462 at 150.83 in his Ohio-based, nitrous-fed ’93 Mustang to qualify No. 1. Haley James followed in second with a 4.488 at 159.32 in her turbocharged “War Eagle” ’00 Mustang. James Spina, Friday’s provisional low qualifier, was the third driver to dip into the 4.40s with a 4.499 at 155.10 in his ProCharger-boosted ’90 Mustang.

Outlaw 632 low qualifier Dillon Voss maintained his top spot with his 4.154 at 170.88 from Friday night. Friday’s No. 2 and 3 qualifiers, Alan Drinkwater and Daryl Stewart, switched spots with their improved performances on Saturday. Stewart laid down a 4.163 at 170.56 in his Clayton Murphy-tuned Chassis Engineering ’12 Camaro to qualify second, while Drinkwater also stepped up to a 4.167 at 169.66 in Kenny Floyd’s naturally aspirated ’04 Escort to sit third.

Complete qualifying results and elimination ladders can be found on the Bradenton Motorsports Park Facebook page.

Eliminations at the 51st annual Snowbird Outlaw Nationals presented by Motion Raceworks will kick off Sunday at 9 a.m. beginning with Jr. Dragsters.