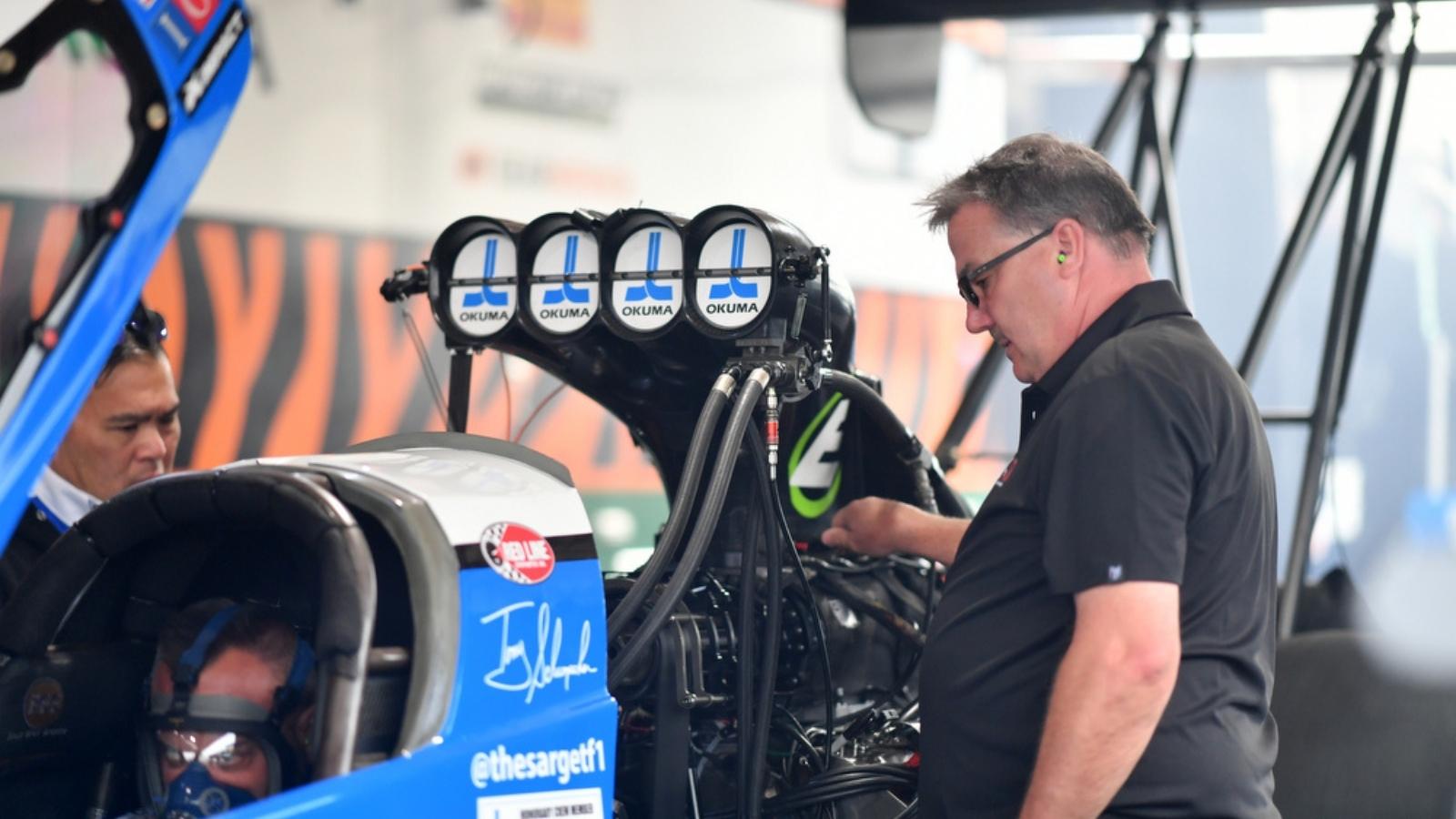 The Maynard Family Racing team (JCM) announced today that crew chief Phil Shuler has joined the Tony Schumacher-piloted Top Fuel operation in an official capacity. The news shouldn’t come as a major surprise for NHRA fans, who may have noticed Shuler’s presence on the starting line and in Schumacher’s pit for the last several events. Prior to Wednesday’s announcement, Shuler had been lending his knowledge and serving as an extra set of eyes since temporarily joining the JCM/DSR camp for the Sonoma, Calif. event in July when crew chief Todd Okuhara was sidelined due to COVID. Shuler then continued on with the team as they raced to victory near Seattle at the NHRA Northwest Nationals, and remained onboard for the Topeka, Kansas outing and runner-up finish in Brainerd, Minn. last weekend.

The initial plan was for Shuler to join JCM crew chief Todd Okuhara and assistant crew chief Marc Denner on a temporary basis, but after seeing how well the trio has worked together and the team’s recent uptick in performance, the decision was made to bring Shuler in-house as a full-time team member and serve as co-crew chief alongside Okuhara as the crew prepares for their 2022 Countdown to the Championship title campaign.

“The addition of Phil to our team became a must-do as I watched the brain trust of Todd, Phil, and Marc work with Tony and our crew to attain the victory in Seattle and continue with performance improvements since that race. Cathi (Maynard) and I are excited to know we have our team set!” said JCM team owner Joe Maynard following the group’s second final round appearance in three events.

As a tuning duo, Okuhara and Shuler have a long history in the nitro ranks. The drag racing veterans worked together from 2003 to 2006 at Don Prudhomme’s operation before joining Don Schumacher Racing in 2006, where they collaborated on Jack Beckman, Gary Scelzi, Jerry Toliver, Cory McClenathan, and Spencer Massey’s cars through 2016. Ahead of the 2017 season, Okuhara was named crew chief on Leah Pruett’s machine, and Shuler joined the U.S. Army team where he served as assistant crew chief of the Schumacher-driven dragster. Shuler’s tenure on the Army car marked his first time working with the winningest Top Fuel driver in NHRA history, and he was an integral part of the team’s second-place finish in 2018.

“After the 2019 season, I stepped away from nitro racing to work on Pro Mods, but I’m happy to be back out on the NHRA circuit full-time again and reunite with Todd and Tony,” said Shuler, who has made a career out of straight-line racing for the past 24 years, including working in a variety of ‘chief’ roles for the last twenty. “Todd and I have a long history together, and Tony and I worked together for a few years on the Army car. This is my first time working with Marc Denner, and I think our group has found a good balance as far as how we all complement each other.

“For me, being away from fuel racing for two years allows me to look at things differently and bring a different perspective,” he continued. “You learn things from other forms of racing such as Pro Modifieds, Drag Radial, and Outlaw cars, that applies to nitro racing.”

For Schumacher, an 86-time event champion who is gearing up to make a run for a ninth Top Fuel championship title, the addition of Shuler appears to perfectly round out his crew chief lineup.

“They just work well together, plain and simple,” said Schumacher of the Okuhara/Shuler combination. “On their own, they’re both great, but when they are able to collaborate, they’re even better. It’s clear our team has been making big strides as of late, and I feel good about the direction we’re headed in.

“Drag racing comes down to being on your game at the right time, that’s why you always hear people say you’ve got to get hot at the right time, and I think we’re only just beginning to demonstrate what we’re capable of, performance-wise,” added Schumacher, who has vaulted from 12th in points up to eighth since Sonoma, and has put himself back into the title hunt conversation. “We have the capability to run right up there with the top-ranked cars in the category, and I feel good about our abilities to keep this momentum rolling into the Countdown. I’m very happy with our current Todd-Phil-Marc arrangement.”

While the playoffs are right around the corner, the team knows the first order of business is a successful Indianapolis outing, an event Schumacher has won more than any other Camping World Series competitor with a whopping 10 U.S. Nationals triumphs. With the ‘Big Go’s’ unique points-and-a-half format, it wouldn’t be out of the question for Schumacher to jump as many as two, possibly even three, spots in the point standings to start the Countdown. Just over three round wins, or 94 points, separates Schumacher from No. 5-ranked Josh Hart, and the Austin, Texas resident sits only 54 points – or less than two rounds – behind Leah Pruett and Shawn Langdon, who are tied for sixth.

Joe and Cathi Maynard already have one win and a runner-up finish since taking over the majority ownership role of the team three races ago and are seeking their second Top Fuel trophy and Don Schumacher Racing’s 368th event win during the Labor Day weekend event. The Okuhara/Shuler-led team will begin qualifying for the U.S. Nationals on Friday, Sept. 2nd at 7:30 p.m. ET.