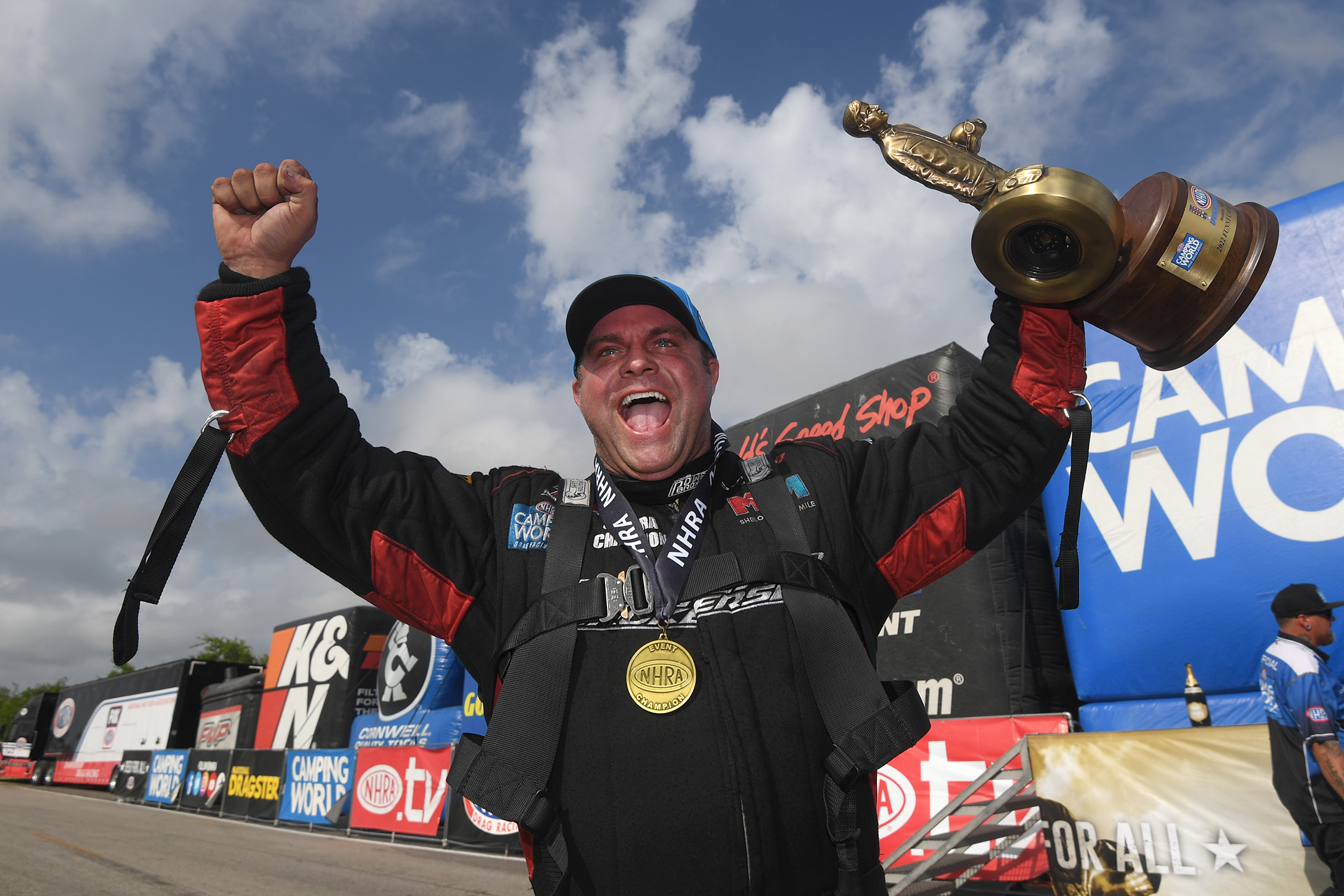 It was Hagan’s 41st career win and his third final round appearance at the SpringNationals after earning his first career Funny Car victory in 2010 and a runner-up finish in 2019 at the Houston dragstrip which announced earlier this year that it would no longer host an event after the property was sold.

“Congratulations to Matt Hagan and the Tony Stewart Racing team for charging to the win aboard the Dodge Power Brokers Funny Car at Houston,” said Tim Kuniskis, Dodge Brand Chief Executive Officer – Stellantis. “It’s great to see Matt continue to perform at the level that enthusiasts have come to expect from Dodge//SRT performance and bring attention to what Dodge Power Brokers and Direct Connection can do for their rides.”

After securing the No. 8 qualifying position, Hagan kicked off eliminations against No. 9 qualifier John Force by taking the Dodge Power Brokers Charger SRT Hellcat for a stout 3.954-second run at 325.77 mph run to turn on his first win light of the day and gain lane choice over No. 1 qualifier Ron Capps in the next round.

Hagan had the early advantage against the defending Funny Car World Champion and fellow HEMI®-powered driver and, while his opponent smoked the tires, set the low elapsed timed run of the round to advance with lane choice over No. 13 seed J.R. Todd for their semifinal matchup. While Todd’s ride went up in smoke right at the hit, the Dodge Power Brokers Dodge Power Brokers and Direct Connection supported Funny Car powered to another strong and straight run to take the TSR team to a fourth consecutive final round and Hagan’s 75th career final round.

The final showdown was a nail biter as Hagan battled closely with No. 11 seed and rookie driver Bobby Bode who was making his first career final round appearance. After Hagan had the quicker start, the two 11,000 horsepower nitro machines battled neck and neck with Bode leading slightly at the eighth-mile mark. Hagan retook the lead just as his opponent began to drop cylinders and then blew the supercharger and the body of his Funny Car into the air. Hagan crossed the finish with a 3.982-second elapsed time at 326.63 mph, his third consecutive 3.9-second run in a row, leaving no doubt about the consistency and winning performance of the Dodge Power Brokers Charger SRT Hellcat.

The win was noteworthy as the final one at the venue but also because the team had extra incentive as Hagan’s ride carried a special decal this weekend to honor Houston native and Crew Chief Dickie Venables’s father, Dick Sr., who passed away in December.

It was also TSR’s fourth final round appearance in five national events to maintain the lead in the Funny Car championship points standings following runner-up finishes at the Arizona Nationals in February and the NHRA Four-Wide Nationals at Las Vegas in early April, along with team’s first win at the Gatornationals in Gainesville, Florida.

“Dickie (Venables) has been such a big part of this, and this is such a special event,” said Hagan. “I won my first race here in Houston with a pedal job and its crazy how history works. This is for Dickie and his dad in remembrance of him. We’re leading the points now and we’ve got a second win for Tony Stewart Racing. Our crew is doing a hell of a job.” 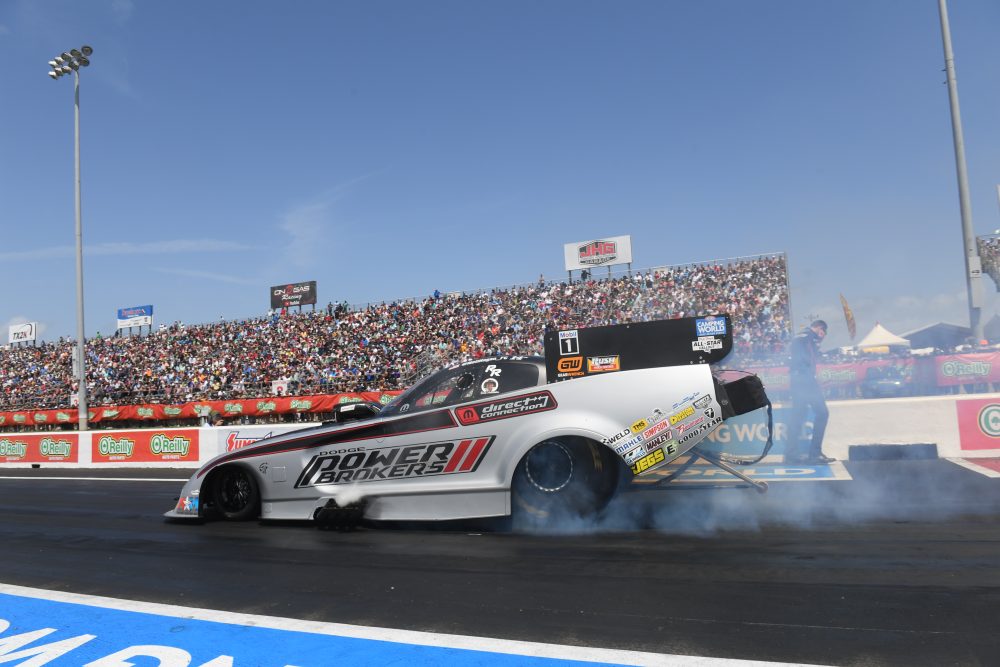 Sitting fourth in the Funny Car standings heading into Houston, Cruz Pedregon returned to the site of his first career nitro win as a rookie in 1992 by taking his Snap-on® “Makers and Fixers” Dodge Charger SRT Hellcat to the third quickest run of the first qualifying session with a repeat performance in the second session. He continued his string solid qualifying efforts this season by earning the No. 3 spot on the eliminations ladder for race day, his fourth top-five start in the first five national events.

His opening round opponent, No. 14 seed Paul Lee, had a quicker start but the Cruz Pedregon Racing Hellcat quickly took over lead and headed straight for the finish to turn on the win light. Staged next to No. 11 seed Bode in the quarterfinals, Pedregon launched first but saw the 20-year driver make the pass and race to the finish first, ending his run through eliminations at the last national event for the Houston track.

In Top Fuel action, TSR pilot Leah Pruett’s best qualifying effort of the weekend came in the final session as she wheeled her Dodge Power Brokers dragster to a stout 3.711-second pass at 329.26 mph to earn a bonus point for setting the third quickest run of the session. That put her in No. 7 spot on the eliminations ladder for Sunday’s SpringNationals where she would line up next to No. 10 seed Shawn Langdon for the opening round.

Pruett powered off the starting line first with a 0.052-second reaction time to her opponent’s 0.072-sec. start, but both lost traction early and pedaled their machines down the track look for the finish line. Unable to get her machine to hook up, Pruett couldn’t reach the line first and saw her race day end prematurely.

The Dodge//SRT and Mopar supported drivers and teams will be back on track next weekend in Charlotte, North Carolina, for the Circle K NHRA Four-Wide Nationals at zMAX Dragway, the sixth of 22 NHRA national events on the schedule this season.