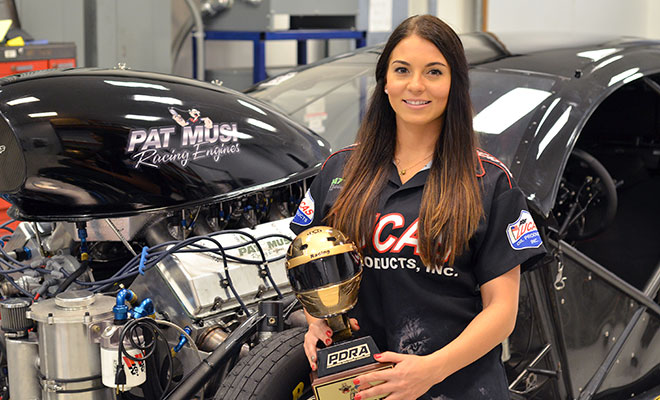 In just her fifth race in the category, Lizzy Musi earned her career-first Pro Nitrous victory in the inaugural Professional Drag Racers Association (PDRA) U.S. Drags at Virginia Motorsports Park (VMP) in Dinwiddie, VA. The historic win was also the first for a female driver in the 89-race history of the Pro Nitrous division. 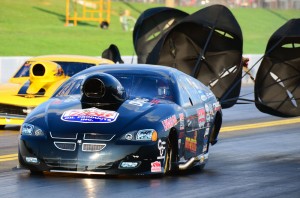 The 23-year-old phenom has certainly been impressive in her Pro Nitrous rookie season, having eclipsed the 3.70-second and 200 MPH performance barriers and appearing in the final round at the previous PDRA race in Martin, MI, but her performance July 25-26 at VMP was especially memorable. In qualifying Musi laid down a Pro Nitrous-record 3.740-second elapsed time that rocketed her to the top of the quickest field in the history of the class, which featured a 3.889-second bump spot thanks to 32 of the best nitrous cars in the world attempting to qualify for the 16-car field. The eighth-mile run was also the quickest-ever on American soil by a doorslammer not utilizing a supercharged engine.

“We struggled during testing and the first two qualifying runs, so we just wanted to get down the track and get qualified in the Friday night session. We didn’t even have a heavy tune-up in it,” Lizzy said. “But when I let go of the button it took off like I’ve never felt before and I couldn’t believe it when the scoreboard read ‘3.74’. My crew chief, Gary Henry, came on the radio yelling ‘3.74! 3.74!’ and I was going crazy inside the car. It was an awesome moment.”

“We got lost in testing, and Rickie Smith came over and talked to Lizzy and got her confidence back up, and he helped us sort out the chassis,” said Pat Musi, Lizzy’s father and a doorslammer drag racing legend. “I get frustrated because I’m a motor guy. He came in and got us pointed in the right direction. I don’t think he knows what that means to Lizzy and myself. I give him 110% on the motor stuff and he gives me 110% when it comes to the car, and that’s something we’ve been doing since I won the NHRA Pro Mod race in Norwalk in 2010.”

As awesome as the qualifying run was, Musi and her team were more focused on completing the job and bringing home the win.

“From the day we got back to the shop after the race in Martin to the day we left for VMP, I was determined to get this win,” said Pat Musi. “We’ve battled little gremlins all season that have cost us races and we really shot ourselves in the foot in Martin. I gathered the team together and told them we simply could not have any mistakes if we wanted to win. After Martin, I knew we had the car and the driver, we just had to put it all together.” 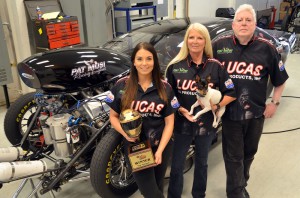 Musi with her mother, Elizabeth, and father, Pat.

The team, which consists of Gary Henry, Joe Dunne, Ryan Lowry, and Musi’s mother, Elizabeth, gelled after Rickie Smith’s pep talk and guided Lizzy through eliminations, where she defeated David Campbell and Jay Cox in the first two rounds before lining up against John Camp in the semi-finals. Musi’s car shook the tires early in the run and it appeared Camp was streaking to the finals when a massive engine explosion erupted from his ’69 Camaro, allowing Musi to get back in the throttle and drive around Camp.

“I drove that car for several years and it can be a handful,” Pat Musi said of King Kong 5, Frank Brandao’s Jerry Bickel-built 2009 Dodge Stratus. “But Lizzy did an awesome job pedaling the car and getting the round win. She can drive, there’s no doubt about it and she proved it there. She doesn’t get rattled. She’s the real deal.”

In the final round Musi would face off with Jason Harris, the man who has steered his Robert Hayes-built, Musi-powered ’68 Pontiac Firebird to four consecutive Pro Nitrous wins. Both cars struggled with traction early in the run, but Musi again pedaled her car to the stripe like a seasoned veteran and became the first to put Harris on the trailer in 2014.

“When I made the turn-off and came to a stop, I just had to sit there for a couple minutes and gather my emotions,” Lizzy said. “It was a combination of relief and joy, but also pressure to go out and perform like this the rest of the year. Everyone is gunning for us now, but I have all the faith in the world in my dad, my team, and my car. I’m so thankful to have the support of Frank Brandao, Lucas Oil, Edelbrock, Shaikh Mohammad Al Sabah of Kuwait and his Drag 965 team, and our newest sponsor, Mike Bankston and Bankston Racing. We’ve had so much help getting here and it’s just been an unbelievable year so far.”

“Every decal on that car has helped us,” Pat Musi added. “We’re loyal to our manufacturers and they’re loyal to us, and it’s paying off. For example, the Edelbrock fuel injection, which is something that has evolved so much over the last year and is only available through Pat Musi Racing Engines. And people like Tommy Franklin, who really helped us get this ball rolling over the winter by selling one of our 903 EFI engines back to us at a tremendous discount and working with us to do some research and development. We’ve got a new cylinder head program and we’re creeping up on some things with the camshaft, and we’d never be able to do all of this on our own.”

Lizzy Musi’s impressive season may surprise a lot of people, but Pat Musi is certainly not one of them.

“I expected her to have success, and she’s had it right from the start,” Pat Musi said. “I’m so proud of her. She grew up around this stuff and has just soaked it up. She’s a natural. I try to help her all I can; we talk racing all day at the shop and then all night at home. I try to share my experiences with her. She’s going to be a force to be reckoned with for a long time.”