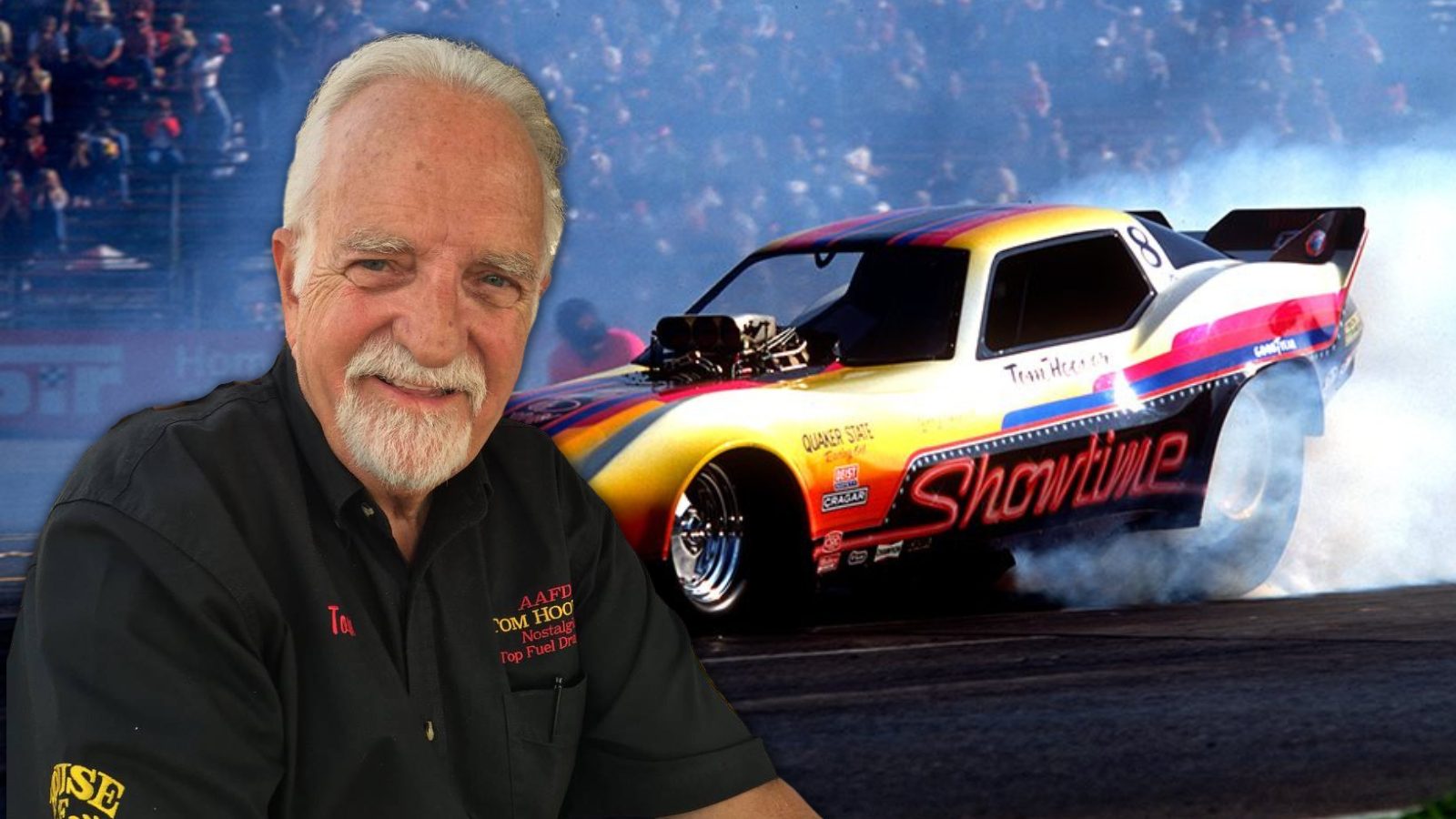 Hoover was a cornerstone of the NHRA, IHRA and AHRA professional drag racing community for almost four decades, having built a 35-year career of competitive racing achievements while delivering extreme thrills for fans in both of drag racing’s major racing categories: Top Fuel Dragster and predominantly in Funny Car. He raced from the 1960s to the early 2000s, creating a worldwide reputation for showmanship and performance on the track. This reputation earned him the nickname “Showtime”, a nod not only to his track record, but also for the stunning paint jobs on his cars by his painter and lifelong friend Reed Holmes, but also well as his colorful on-camera interviews and his candor with fans.

Hoover is survived by his wife of nearly 50 years Betten Hoover, and his children Trent Hoover (deceased in 2018), Troy Hoover, Leighe “Paige” Steers and Landon Hoover as well as 10 grandchildren and three great-grandchildren.

“Anyone who ever met Tom, would certainly remember that very moment,” said his wife Betten Hoover (on left) who penned the book Out of the Groove about living life on the road. “His presence and personality were both larger than life and he could put a smile on anyone’s face with his wit and humor. He was fearless in his racing pursuits and lived for the sport, but it was his family legacy that meant the most to Tom.”

While Hoover was determinately humble, his notable list of racing accomplishments throughout his career in funny car included the following:

In 1965, Hoover’s first “major” victory came at the American Hot Rod Association (AHRA) Winter Nationals in Phoenix Arizona. At just 24 years old, he was the youngest driver to ever win such a major event.

In the early 1970s, Hoover became one of the first dragster drivers to take on the challenge of driving and owning the then newest class of drag racing vehicles, the nearly uncontrollable “Funny Car”. Hoover went on to win the AHRA Funny Car Championship three years in a row in 1976-77-78.

In 1977 Hoover won the NHRA Grand Nationals in Montreal, Canada. He followed up that victory in 1979, winning the NHRA Winter Nationals in Pomona, Ca. and went on to rank among the top ten NHRA Funny Car drivers in the nation almost every year through the late 1990s.

In the 1980s, Hoover became the fifth of eight members to the prestigious Cragar Five Second Club with a recorded elapsed time of 5.95 seconds in the quarter mile. The 80’s also saw Hoover bring international prominence to drag racing by racing at Santa Pod Raceway in Podington, England, where he partnered with UK-born funny car driver Bill “Cannonball” Sherratt, who became his closest collaborator and best friend. Tom went on to become an international ambassador of drag racing, bringing his passion for speed and pushing the limits of performance to Canada, Mexico and even earning the title of “World Champion of Australia” in a dragster in 1995.

Throughout the 1990’s, Hoover continued to rack up wins, winning the National Race at Phoenix in 1992, the Fram Autolite Nationals in Sonoma, Ca. in 1993 and the Pontiac Excitement Nationals in Columbus, Ohio in 1997, which he won just nine weeks after undergoing quadruple by-pass heart surgery, against the better judgment of his doctors.

In 2014, Hoover was awarded drag racing’s highest honor, induction into the International Drag Racing Hall of Fame. That was an incredible honor to him given his parents George- who was Tom’s crew chief well into his 80’s- and Ruth Hoover were also inducted decades before him.

Most recently, in 2016, the NHRA presented him with a special “Legend of the Sport” Award.

In recent years, Hoover was quoted as saying, “The greatest thing that I gained by being a professional in this sport was the many friendships that I made both here and abroad and the many memories that now sustain me. Memories anchor our lives on what was and what is still to be as we race into the future.”

Hoover had been in declining health in recent years but would still be seen at a few NHRA races each year most notably the NHRA Brainerd Nationals in his native Minnesota, catching up with old friends and fans alike. In his last years, Hoover could be spotted at Cacklefests with friend Steve Anderson (on far right) showcasing his 1966 front-end “fishbowl” dragster that Hot Rod magazine called it most beautiful dragster ever built in the March 2015 issue. That car was exhibited as an art sculpture at the Weisman Art Museum in 2017. Tom Hoover’s racing family archive is housed in permanent collection of the Minnesota History Center in St. Paul, Minnesota.

Showtime Fans are invited to share stories about “The Hoov” on Steve Anderson’s fan page https://www.facebook.com/steve.andersen.31

NHRA also recently featured Hoover’s near win in Indy in a Nitro Time Machine video that is fun to watch.