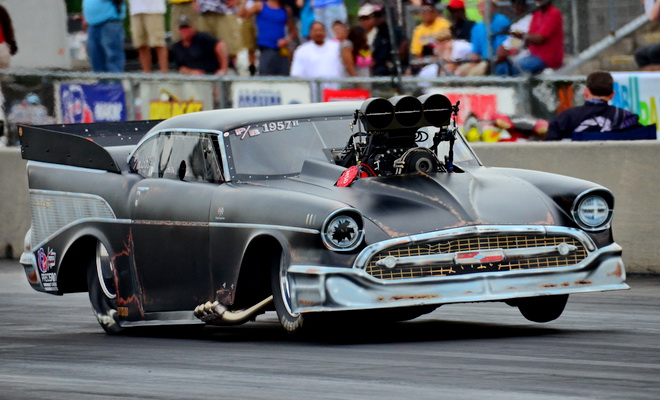 At 68 years of age, Larry “Higg” Higginbotham may be one of the oldest drivers on the PDRA tour, but he exudes the energy and passion of someone decades younger. Maybe it’s that passion that keeps him working the long hours necessary to run a successful trucking company and field a Pro Boost team with the Professional Drag Racers Association.

The Ohio native first got a taste of speed taking his street car to the track in his early 20s, but soon put things on hold to focus on his business. It wasn’t until about 15 years ago that a friend took Larry back to the track. After that one trip, he was hooked. He first fielded a Corvette and competed in Quick 16s and with the NSCA, where he set a National Record. He also won Norwalk Raceway Park’s famed Halloween Classic in the Corvette before a fateful run at Pittsburgh Raceway Park.

At about half track the car’s throttle hung causing it to turn into the wall. With the throttle still hung, Higg was on the ride of his life, rolling several times. Amazingly, he walked away. Despite the tremendous crash, he was soon ordering a ‘57 Bel Air body and chassis from Tim McAmis. He put the new ride together himself in his two car garage.

Higg and his Bel Air are right at home in Pro Boost, a class with many storied cars and drivers. While he may line up against another Bel Air, he’s just as likely to run a late model Corvette, a ‘53 Studebaker, a ‘70 Barracuda or a ‘68 Firebird.

“It’s a great class,” Higg said of Pro Boost. “I ran Pro Mod with the ADRL. The overdrive being only 14 made it tough. With PDRA offering unlimited boost, everybody can run what they want to. It’s a great class. I think they’re going to have some great numbers. As time goes on everyone is going to get faster and faster. We really like the PDRA. The ADRL was a great outfit and the PDRA is probably better than that.”

Higg himself has reached a top qualifying spot of fifth (Memphis) and earned a semifinal finish at the Georgia Drags. “It takes more than one person to do this and I have an unbelievably good crew,” he added. His crew consists of Crew Chief Doug Baer as well as Kelly Baer, John Hines, Jim and Bonnie Smith and Mike Stanley. “This crew is unbelievably good. It makes it work, if you know what I mean. You need a good crew and these guys are great.”

Although Larry’s trucking company, Higg Trucking, has become successful enough to allow him to return to a passion of his youth, he welcomes sponsorship for his currently self-funded team, because while he may qualify for senior citizen discounts, he’s not planning on slowing down anytime soon.

While Higginbotham is living the dream, racing against the top names of the sport, he’s also an inspiration to many himself. At 68 years old he’s showing people that “old guys can do it, too. A lot of people sit in the stands watching and maybe they think they have a chance to still be doing things when they’re 68.