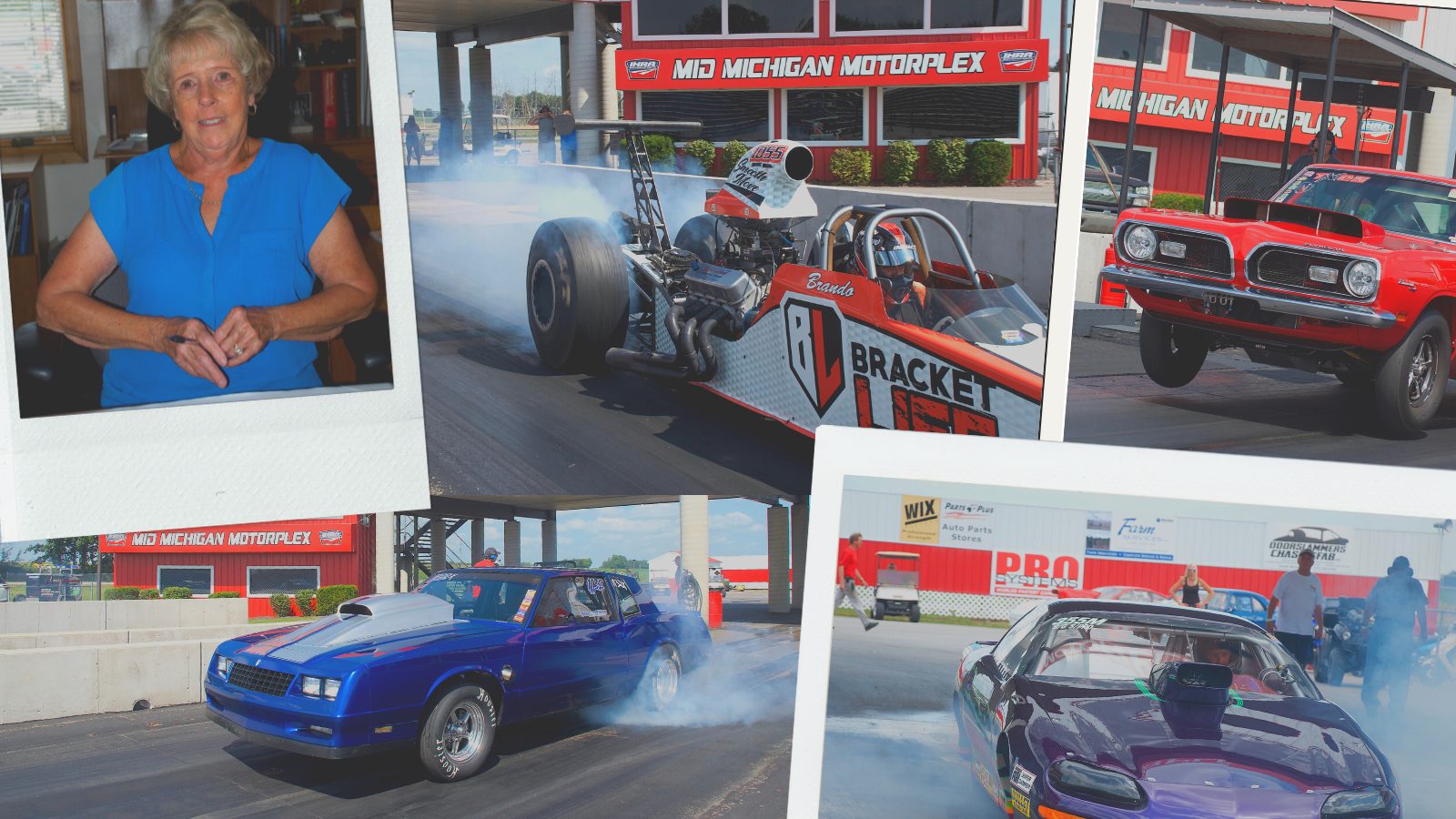 When it comes to reflecting over the last half-century and counting, it’s amazing for Mary Ledford to realize she’s been in the drag racing business for 52 years. It all started in 1970 when she and her husband, Jim, built a dragstrip from scratch in northwest Michigan. Mary was just 20 years old at the time.

Five years later, the Ledfords became interested in resurrecting a defunct dragstrip in the middle of the state, a former 1950s airstrip that later operated as Central Michigan Dragway in Stanton but had been closed since 1968. After lying dormant for seven years, the track needed serious updates in every direction.

After buying the track, Jim and Mary arrived in their station wagon, along with their two young sons. For the first two weeks, this family of four lived on-site in their car, laboring long hours at the track. After working all summer, their goal of having their grand reopening on Labor Day weekend in 1975 became a reality, renaming the track Mid Michigan Motorplex.

A lot has changed since then, namely the untimely passing of Jim at age 55 in 1998. It’s no surprise that Mary describes the 1999 season as a terrifying time in her life. “I had to mentally program myself to get up each day and do this,” she reflects.

To this day, Mary practically never misses an event, and her sons also play an important role in the track’s operation. She once laughingly commented, “One day, I want to see what other people do on the weekends!” So far, at age 72, she still wonders. “Drag racing is all I know!” she laughs.

If it ended tomorrow, it’d be an amazing run, but she shows no signs of slowing down, and the 2022 season is among the busiest she’s experienced in years, mainly because the weather has cooperated nicely thus far. By midseason, she had had just one rainout. The often-dicey April weather was unusually cooperative for the season kickoff, and the car counts have been spectacular for most of her big events.

Ledford began the new season with a test-and-tune session on April 10, followed by another on the 16th, and concluded the month with the first bracket points race in late April. The bracket series is sponsored by American Race Cars and Doorslammer ChassisFab, respectively, of which Mary usually schedules about 18 events per season.

The Michigan Snowmobile Asphalt Drag Racers Association made its first appearance of the season in early June. “They’ve had as many as 80 sleds for some of their meets! It’s a point-earning series, and we schedule them around seven times per season,” says Mary.

The Great Lakes Stock/Super Stock Association also visited Mid Michigan in June, as the event was held in conjunction with the three-day Money Maker event featuring Box and No-Box. By early July, it was time to celebrate Independence Day with yet another event that had picture-perfect weather and drew 300 race cars. The Street Tire Shootout Reunion was also held in July with solid results.

If ever there’s an event that keeps Jim Ledford’s memory alive, it’s the August running of the Todd’s Extreme Paint World Super Pro Challenge. Affectionately referred to as the “OG 50 grander” by many, this is a race that Jim famously scribbled out on a piece of paper nearly three decades ago while Mary was inside a Kmart. “When I returned to the car and he told me we were going to pay 50 grand to win for a bracket race, I thought he’d lost his mind!” laughs Mary.

He wasn’t joking, and the inaugural event drew 418 race cars, all while Mary was fielding calls from professional nitro racers, asking if they too could come and race for the big bucks. “The pro ranks didn’t even pay this kind of money back then!”

The event is now in its 29th running, most recently held August 4-7, and famously has only had one repeat winner in its near three-decade existence! It wasn’t until Aaron McCualla won the event in 2021 that a repeat winner emerged from this storied race.

Most recently, Tom Aretakis Jr. became the latest winner of this historic event after getting past Skylar Drews in the thrilling final. Ironically, Aretakis first won Thursday’s $10K kickoff before his remarkable main event victory. The purse was even greater than advertised, as Sunday’s finale wasn’t looking favorable with unexpected rain moving in, so Sunday’s $5K was added to the main event, making the payout a whopping $55K to the winner. More history was made as Aretakis captured the win leaving off the bottom bulb, a first in this event’s history.

September is also widely known for the gathering of the Pure Stock Muscle Car Drags. “They’ve been coming here for 28 years…Mid Michigan Motorplex is the only place they’ve ever held this race!” smiles Ledford. The participants show off their all-original cars from 1955 to 1979, and the event brings in 3,000 spectators over the course of two days.

October closes the season with a pair of test-and-tune events that will put a period on the 47th season since Jim and Mary reopened the track in 1975. “It takes a lot of dedication. I’m 72 years old and still doing this, but again, it’s all I know!” Mary smiles.