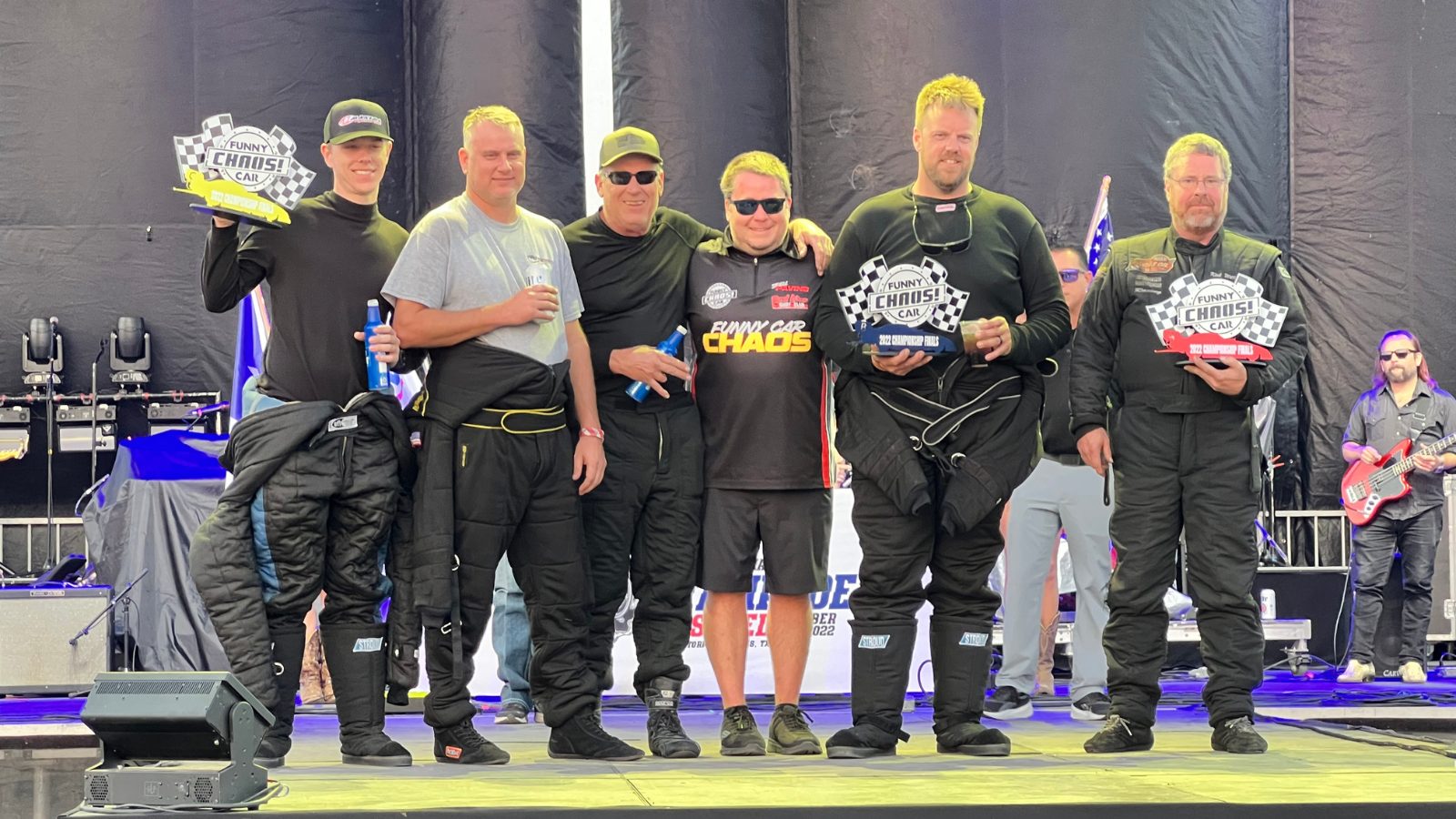 The 2022 Funny Car Chaos Series season wrapped up today at the 2nd annual Stampede of Speed from Texas Motorplex. Newly crowned 2022 Funny Car Chaos champion Kirk Williams led the A Field of 32 cars into eliminations on Saturday with a monster 3.65 second pass at 211 mph. Smiley Cordero with a 3.93 second run was top of the B Field, Terry Haddock led the C Field with a 4.26 second pass and finally the D Field was capped by Mitch King’s 4.43 second pass. Two days of qualifying led up to Saturday’s four field elimination rounds which were won by Williams, Shayne Lawson, Alex Barker and King.

In the A Field it was No. 1 qualifier Williams capping his world championship season with his sixth win of the year defeating Mike Newkirk for Funny Car Chaos trophy and commemorative Stampede of Speed belt buckle. In the final Williams was second off the line but made up the difference almost immediately getting the win with a 3.679 second pass to Newkirk’s 3.749 second run.

Lawson worked his way through a tough B Field of Funny Cars and was able to take the win on a competition single after Mary Reep was unable to make the call after her semifinal win. Lawson executed a monster burnout before taking his third win light of the way with a 5.188 second pass at 94.77 mph in the 1/8 mile.

Barker captured the win for the C Field from the No. 2 qualifier position getting the immediate win light in the final when Dustin Bradford redlit by -.001. Barker’s second win of the season lit up the scoreboard with a time of 5.033 seconds at 94.14 while Bradford was on a quicker 4.105 second run at 175.68 mph that was all for naught after the early start.

Finally, King wrapped up the 32-car field of eliminations defeating Chuck Loftin in the first round and receiving a competition bye in the semifinals to face Chance Biffle for the D Field trophy. Biffle knew he would need everything he could grab on the starting line and to get a great start narrowly red lit by -.008 before making a losing run of 4.485 seconds at 151.09 mph. King made a strong smooth pass of 4239 seconds at 173.59 mph which was quicker than his No. 1 qualifying effort.

The Funny Car Chaos World Finals wrapped up the second day of the Stampede of Speed for Texas Motorplex. Over the next eight days fans from across the country will be treated to races, concerts and fan events leading up to the 37th annual NHRA Texas Fall Nationals, October 13-16.