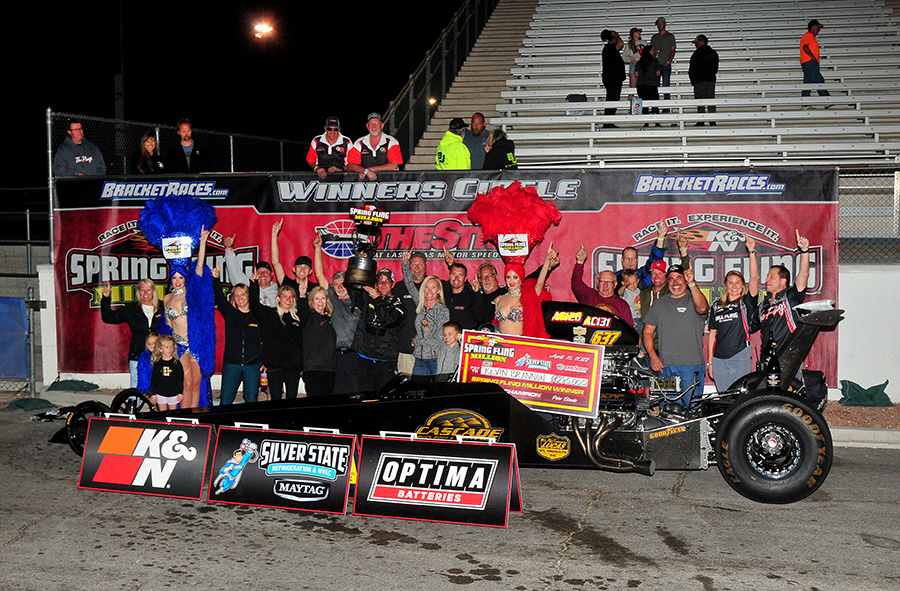 The air was electric with the anticipation of the huge payout in store on Silverstate Million Dollar Friday at the K&N Spring Fling Million presented by Optima Batteries. 260 drivers had their game faces on as the intensity of the $285,000 at stake increasingly became a reality as the day progressed.

The Brodix Run for the $50,000 provided all racers on property the opportunity to turn $75 into $50,000. If a driver put down a perfect run with a .000 reaction time and ran dead-on their dial-in with a zero, they would be handed a check for $50,000 on the spot while the top three packages would receive various prizes. With four racers tied at a .005 package, names were randomly selected for the awards. Jim Glenn won the SR20 cylinder heads from the drawing, and Gary Williams claimed both the second and third prizes with two entries – $2,000 and a 2023 Spring Fling Million tech card.

In what felt like the blink of an eye, the sun sank down behind the desert mountains and the track lights reflected off the racing surface as the Laris Motorsports Insurance finalists staged up to find out who would join the rest of the competition on the ladder. Perennial Fling bottom-bulb finalists Andy Schmall and Nick Hastings met in a monster match-up. Schmall used a .014 reaction and ran dead-on nine to knock out Hastings, advancing to the round of 13.

Those who fell just short of the quarterfinals included Gary Williams, Jeff Serra, Johnny Ezell, Donny Burleson, and Austin Williams. Round seven would see the pairings of Dylan Hough and Spencer Massey, Doug Foley Jr. and Andy Schmall, Dan Northrop and Kevin Brannon, and Chris Gulitti on the bye.

Schmall took .010 to be dead-on zero for the win against Foley, while Brannon laid down .008 total to the .013 package of Northrop. Hough bowed out against Massey who was .006 with a .043 advantage on the tree to lock in a spot in the semifinals, while Gulitti took the green on his single.

In the final round Brannon was .005 and took .002 to be two thousandths under on a double breakout against Massey, who was .010 on the tree and just five thousandths under the dial. In the Hough family Race Tech dragster he’d never sat in prior to Friday morning, Brannon had captured his second Million dollar event win.

“This is all for Kyle [Seipel] right here. The first one without him… I just want to dedicate this one to him, and Bob [Unkefer],” said Brannon after cashing in on his $285,000 payday. The winner’s circle awaited him with Vegas showgirls, and a limousine to escort him to a suite at the Cosmopolitan. 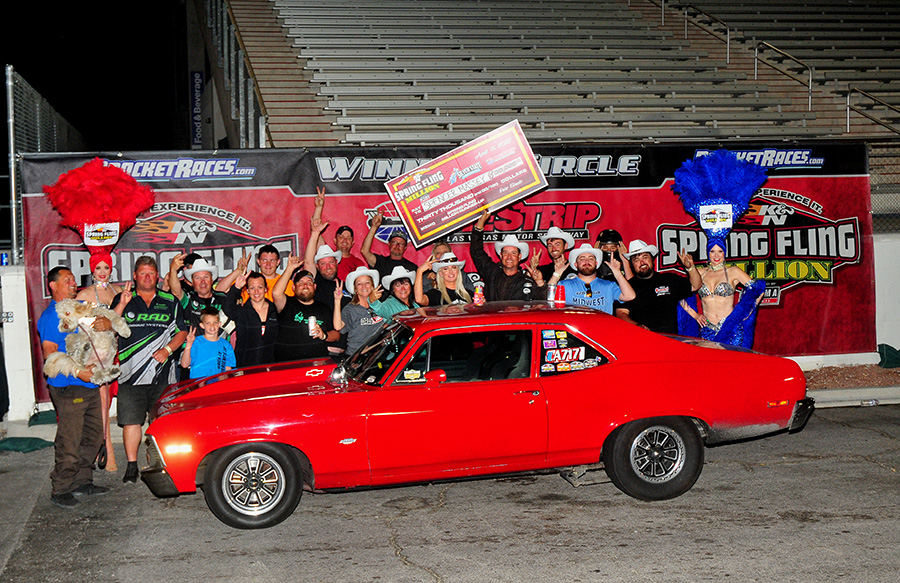 FTI Performance Saturday will wrap up the K&N Spring Fling Million with another $30,000 up for grabs.

Event coverage will be more enhanced than ever with the addition of live timing by DragRacer.TV, a finish line instant replay camera, exclusive interviews, and in-car footage streamed live on the BangShift.com free to the viewer courtesy of Hoosier Tire and JEGS Performance.