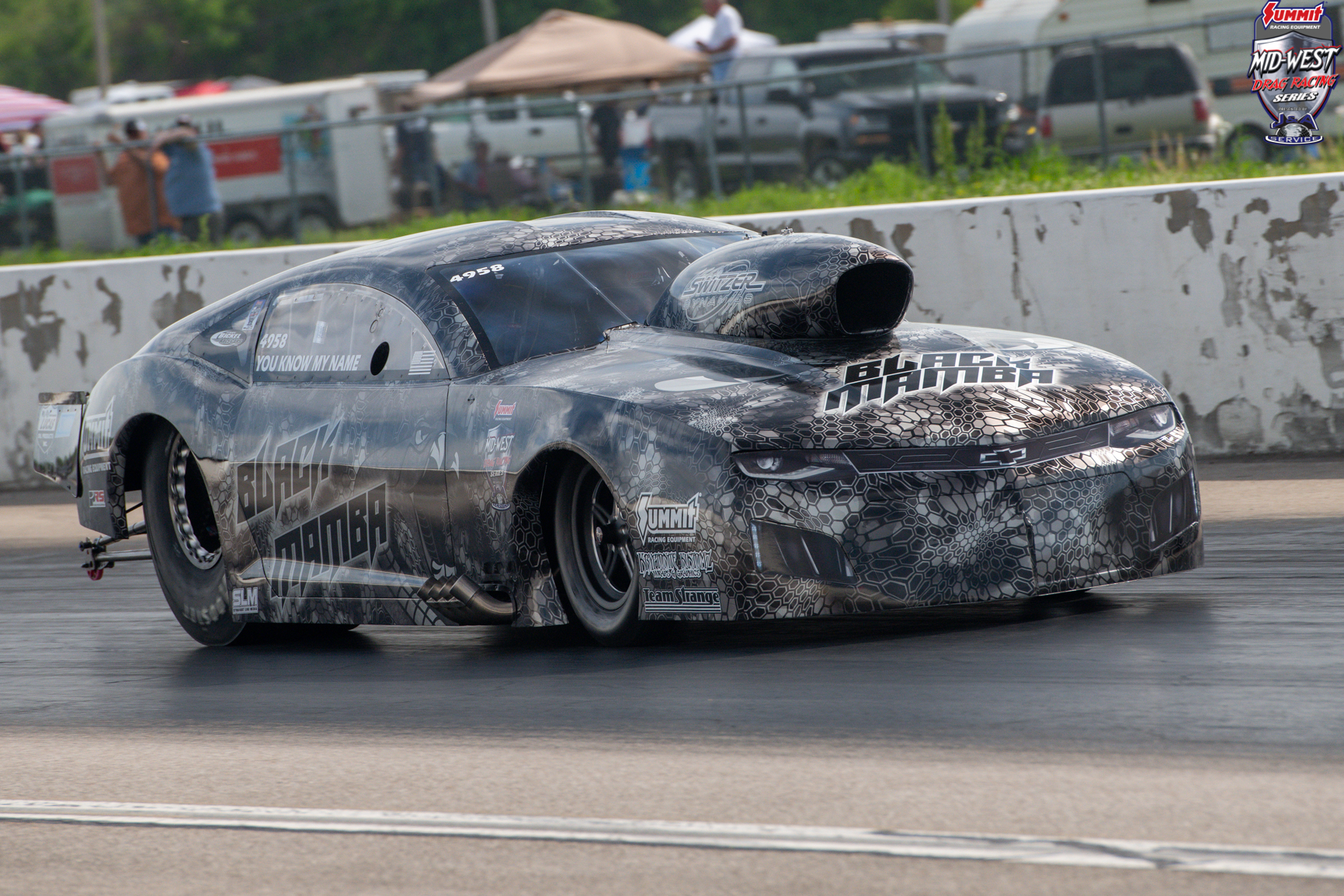 With two event wins on the line at this weekend’s Throwdown in T-Town, Keith Haney is ready to do whatever it takes to park his nitrous-assisted “Black Mamba” Camaro in the winner’s circle twice while racing in front of his hometown crowd at Osage Casino & Hotel Tulsa Raceway Park. It’s going to be a big weekend for Haney, who’s chasing the Stroud Safety Pro Mod championship in the Summit Racing Equipment Mid-West Drag Racing Series (MWDRS) presented by J&A Service.

The series wasn’t able to complete eliminations at the Memphis Nationals two weeks ago due to wet track conditions. Memphis eliminations will start Thursday evening and will wrap up Friday morning before starting to qualify for the Tulsa race Friday evening.

“Last time we did a double event back in October, I ended up in the semis and then won one,” said Haney, who owns the series and co-owns Tulsa Raceway Park with fellow Pro Mod racer Todd Martin. “I’m hoping for a repeat of the same thing that happened, other than go winner-winner this time. I’m excited about getting back to racing. Memphis was a long, drawn-out show with the rain and the hard work we did on the track getting it ready. I was out there with blowers trying to get it dry just like the other MWDRS and track officials. I’m excited to get back to racing and competing and doing two shows in one event and still being home with Momma on Mother’s Day.”

Haney in his Musi-powered, Bickel-built hot rod qualified No. 9 at Memphis with a 3.799-second pass at 200.26 mph in rain-shortened qualifying. It was the first race on a new set of rules after adjustments were made to multiple combinations following the season opener.

“I think the rules worked out good,” Haney said. “Everybody got a little closer at the race, qualifying wise, but we’re going into eliminations. I got my tough guy, Tommy Cunningham [owner of Stroud Safety]. It seems like we always meet first round or somewhere around there.”

Along with a busy weekend on the racetrack, it’s going to be a hectic few days in the pits for Haney, who lives in nearby Broken Arrow and owns multiple businesses in the Tulsa area.

“It’s wonderful to be racing at home and to run in front of everybody, but also a little stressful because there’s so many people who want your attention at your home track,” Haney said. “Not only do I co-own the racetrack, I own the series and I race and we’re in our hometown with all of our family and businesses. I’m wearing a lot of hats. Thank God I have my wife, Misty, to take half those hats away from me. I wouldn’t be able to do it all without her. All of our crew members’ families are here as well. Everybody’s got a lot going on.”

While Haney will focus on the driving side of things, he leaves the mechanical aspects up to his hard-working team led by tuner Brandon Switzer of Switzer Dynamics. Switzer specializes in nitrous-oxide-assisted applications, and he’s tuned the two most recent event winners in PDRA Pro Nitrous.

“I’m glad to have Brandon Switzer in the house tuning for this race,” Haney said. “None of our races overlap with PDRA, which is nice. He tunes the guys over there that just won, both finalists at the last race, Mike Achenbach and Jim Halsey, and Halsey ended up winning. I’m glad I have his attention here chasing a championship this year.”

Haney will also have the onsite support of Summit Racing Equipment, which is both the team’s main sponsor and the naming rights sponsor of the MWDRS.

“Summit is going to be on premises with their support trailer,” Haney said. “I’ve got my sponsor here – I’ve got everything here. It’s going to be great.”

MWDRS Memphis eliminations will begin Thursday at 6 p.m. and will conclude Friday with the final round at 11 a.m. The series will then move into the Tulsa race with qualifying sessions at 6 and 8 p.m. Pro Mod will run a third and final qualifying session at 11 a.m. Saturday, followed by eliminations starting at 6 p.m. Fans can tune in to the official MAVTV Plus event livestream at www.MAVTVPlus.com.