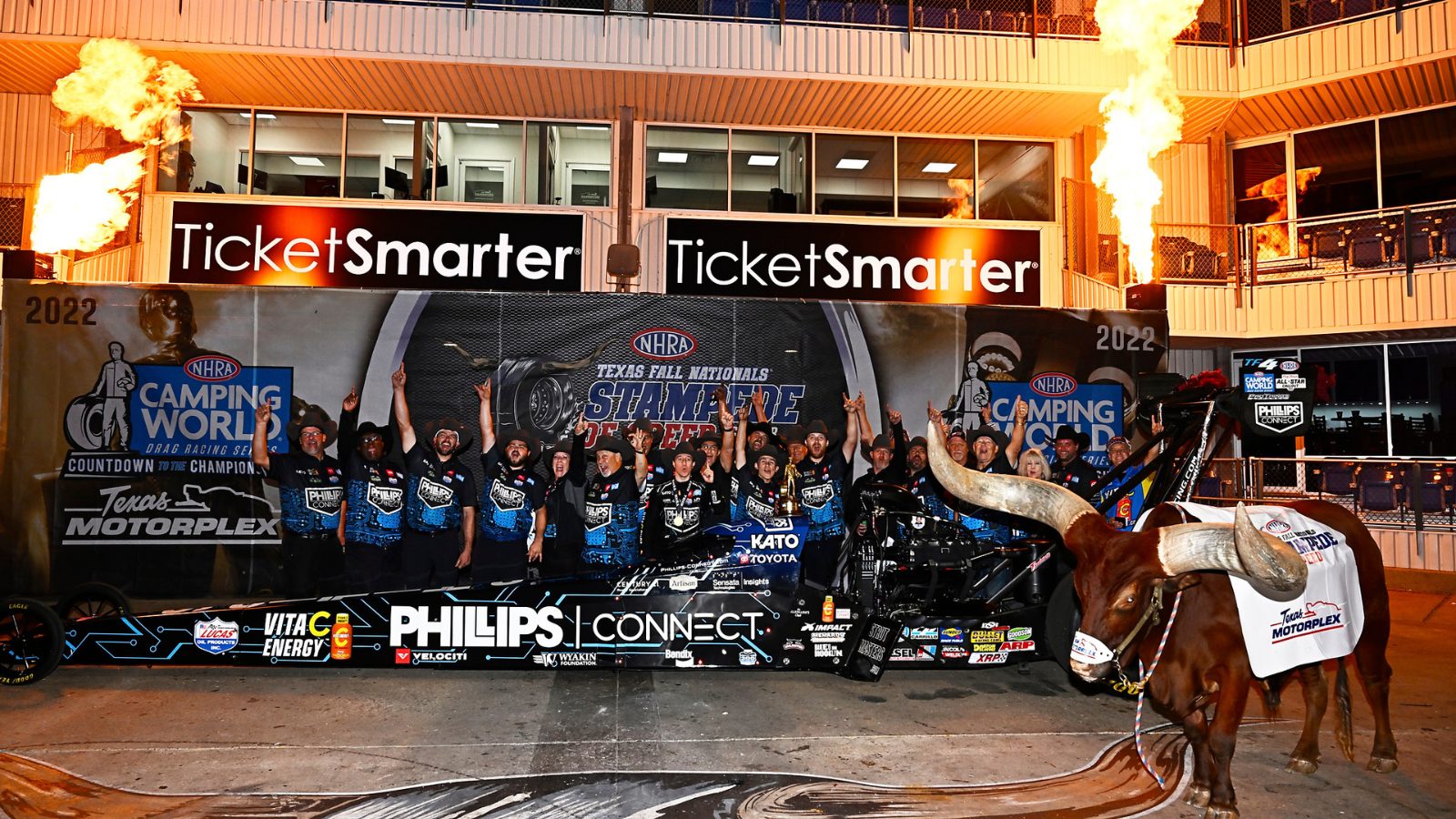 Justin Ashley and the Phillips Connect Toyota Top Fuel dragster powered by Vita C Energy  won the Texas NHRA Fall Nationals today at Texas Motorplex, defending their 2021 title and extending their points lead. The team owner and driver has an 88 point lead on his nearest competitor with two playoff races remaining in the 2022 NHRA Camping World Drag Racing Series season. After two days of qualifying that saw Ashley and his Mike Green and Tommy DeLago tuned Phillips Connect dragster secure the No.. 10 qualifying spot heading into race day. On Friday the team rolled off the trailer and posted the quickest run of the session but then the team struggled to regain control of their elapsed time consistency. The final pass on Saturday gave the team some confidence going into Sunday and that was all the 2020 Rookie of the Year needed.

Ashley upset fellow Countdown contender and No. 7 qualifier Doug Kalitta in the first round before outrunning Kebin Kinsley, Shawn Langdon and finally Austin Prock in the final for his fifth career Top Fuel victory.

“It really was a great weekend – anytime you can go out there and turn on four-win lights on race day it is great,” said Ashley, who has three final round appearances in the 2022 Countdown. “The winner of this race, where it is positioned in the season, makes it all that much more significant. There are only two more races after this and we know the past history has shown that if you win Dallas – you really put yourself in position to go after that championship. Our Phillips Connect team did an incredible job all weekend long. It was like a bracket car. To have a Top Fuel car run that fast and run that consistently, it just speaks volumes of our entire team. When you look at the Top Fuel class – it’s so competitive, from drivers to teams. We are all making each other better and I cannot thank Phillips Connect, Vita C Energy, Toyota and all of our partners enough for the opportunity to race against the best in the world.” 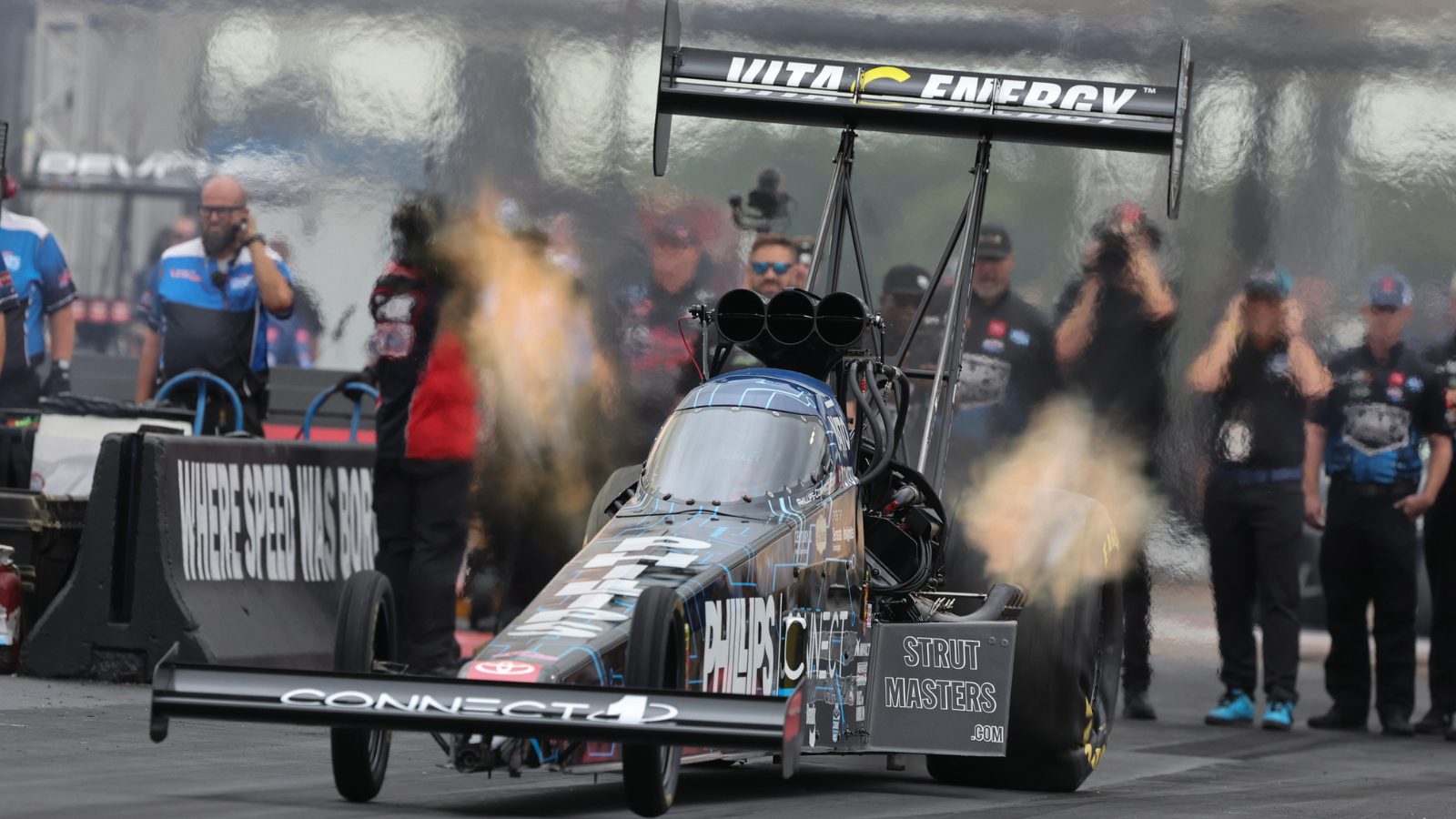 In the opening round facing fellow Toyota driver Kalitta Ashley knew he would need to bring his A Game to the starting line. Each of these drivers are recognized as some of the best off the line when it comes to reaction times. Ashley grabbed a slight lead and held on wire to wire for the win in a huge match-up with championship implications.

The race of the day was the semifinal match-up with 2013 Top Fuel world champion Langdon. Ashley was nearly perfect off the line with a .020 reaction time in front of Langdon’s impressive .040 and it was another start to finish perfect pass for Ashley who has won in Pomona, California and Bristol, Tennessee this season. Ashley flew across the finish line with a winning elapsed time of 3.686 seconds.

An anti-climatic final round unfolded when Prock smoked the tires right off the starting line and offered no resistance to Ashley who blasted down the left lane to victory. The winning time was another strong performance by the Phillips Connect Top Fuel dragster that is closing in on possibly an insurmountable points lead with two playoff races remaining. In two weeks the tour will return to action at The Strip at Las Vegas Motor Speedway.