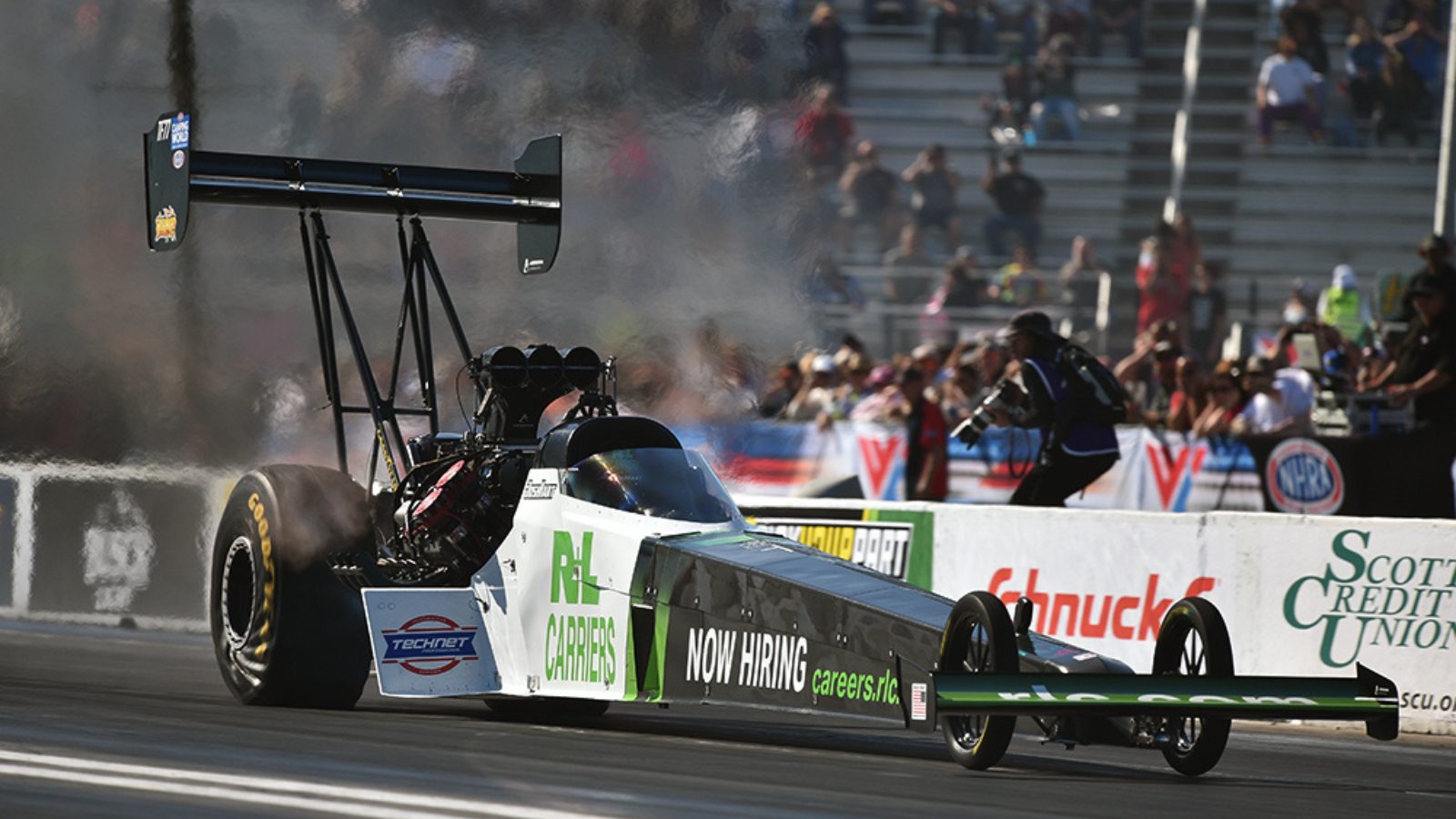 Las Vegas is known as the city where fortunes can change in an instant and second year Top Fuel driver and team owner Josh Hart is hoping Lady Luck smiles on his R+L Carriers Top Fuel team this weekend at the NHRA Nevada Nationals. The accomplished driver who last year raced a partial schedule, took a huge step forward with his program this season, racing all 20 NHRA national events to date. He is in the thick of the battle for the Top Fuel world championship and with two races left Hart is sitting in sixth place just 147 points out of first in one of the most competitive Top Fuel battles in recent history. The NHRA Nevada Nationals will be an opportunity for Hart and the R+L Carriers team to close the gap with round wins on Sunday.

“We know what we need to do and our focus is on getting qualifying bonus points and going rounds on Sunday,” said Hart, a two-time Top Fuel national event winner. “In Dallas I let the team down but I put that behind me and now the only thing everyone on this team is thinking about is getting the most out of the Nevada Nationals.”

Two weeks ago, Hart suffered his first red-light start of his career in the first round against Leah Pruett losing out on the chance to advance to the quarterfinals with a strong first round pass. The silver lining for Hart was he was able to maintain his position in the points and not fall out of championship contention. The final race of the season will award points and a half (30 total) for every round win so Hart knows if he can cut into the lead this weekend, he will control his own destiny for the championship.

This season has been a learning process for the former weekend racer from Ocala, Florida who started his racing career in a Ford Lightning pick-up truck. After moving up through the Lucas Oil Drag Racing Series and a very successful stint behind the wheel of a Top Alcohol Dragster Hart made the jump to Top Fuel to race against the quickest and fastest drivers on the planet. As an independent team racing for the first time on a full-time schedule Hart has seen new parts of the country and battled some significant growing pains along the way.

“I really didn’t know what to expect this season with a brand-new race car and a young team,” said Hart. “We have a great leader in my crew chief Ron Douglas and our sponsors R+L Carriers and TechNet have been amazing. Our goal is bigger than wins on the race track. We are promoting career opportunities across the country with R+L Carriers, a family-owned business that has been successful for over 50 years. At every race I am talking with fans and guests about job opportunities that can change their lives.”

Hart has shown flashes of brilliance this season racing to the final round at the Norwalk Nationals and consistently holding off challengers throughout the season to secure his spot in the NHRA Countdown. Once the Countdown began Hart raced to a final round at the Midwest Nationals in St Louis and he has only suffered two first round losses in the past 11 races. That is the kind of consistency that has Hart knocking on the door of the Top Fuel championship.

“There are two races left in the season and I feel very confident in this R+L Carriers team,” said Hart. “We just raced in our 33rd career Top Fuel race and we are competing with teams and drivers that have four or five times as many races under their belts. This level of competition is the best in the world and I want to show everyone that we belong at this level.”

Hart and the R+L Carriers Top Fuel team will have two qualifying runs on Friday followed by two more runs on Saturday to grab as many qualifying bonus points as possible and secure one of the 16 spots in the qualified field for race day. Final eliminations will begin at 11 a.m. local time with the race being broadcast nationally on FS1.