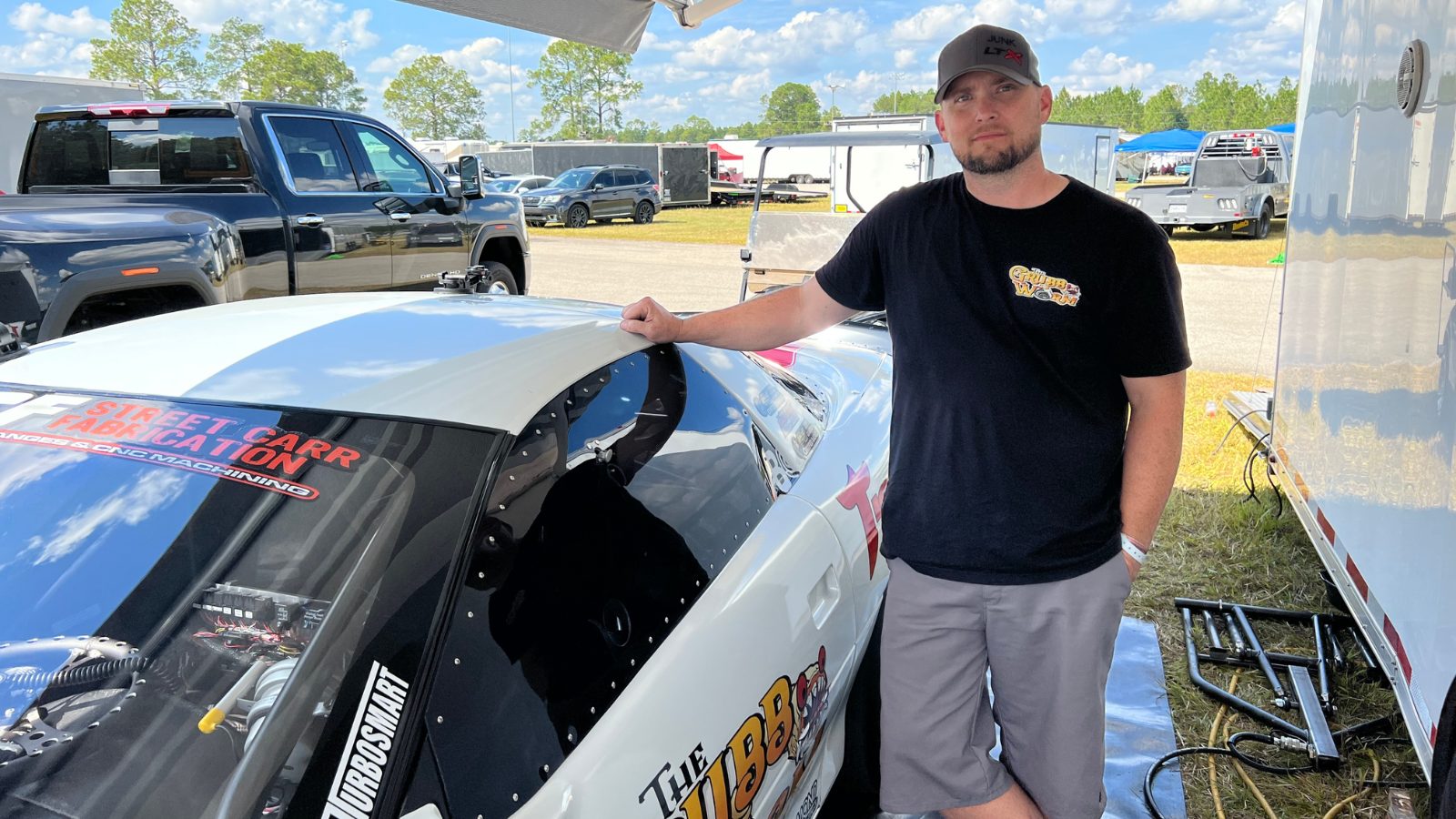 When Jonathan Atkins lit up the right-lane scoreboard at Gainesville Raceway with a 6.615 at 216.41 MPH Saturday night at FL2K presented by Brian Crower, he didn’t just move on to the final round of an impromptu four-car shootout for $3,500. He also obliterated the elapsed time record for a stick shift car in the process, catching the attention of everyone on the property, as well as onlookers online.

Earlier in the day, Atkins in his turbocharged, small-block-Chevy-powered “Grubb Worm” ’97 Camaro broke the H-pattern stick shift record with his 6.755 at 213.00, qualifying No. 1 in Outlaw Stick Shift. The record was previously held by one of Atkins’ Tick Performance customers, Joel Steele, with a 6.81. Both the 6.615 and the 6.755 surpassed Atkins’ expectations for the weekend.

“We had an idea based off of some eighth-mile times that we’ve recently done that the car could or should go 6.80s,” Atkins said. “There’s always that H-pattern record in the back of your mind. You’d like to get that just for the bragging rights. We didn’t really imagine we’d come here and get the record. We thought we’d come here and just get into the 6s and try to win the event. Being in Florida, it’s not the greatest conditions when you talk about October weather conditions. But the track’s been phenomenal, I mean unbelievably good. We went out and put a 6.75 down on a pass that we thought would probably be a 6.90, so that kind of blew our minds.” 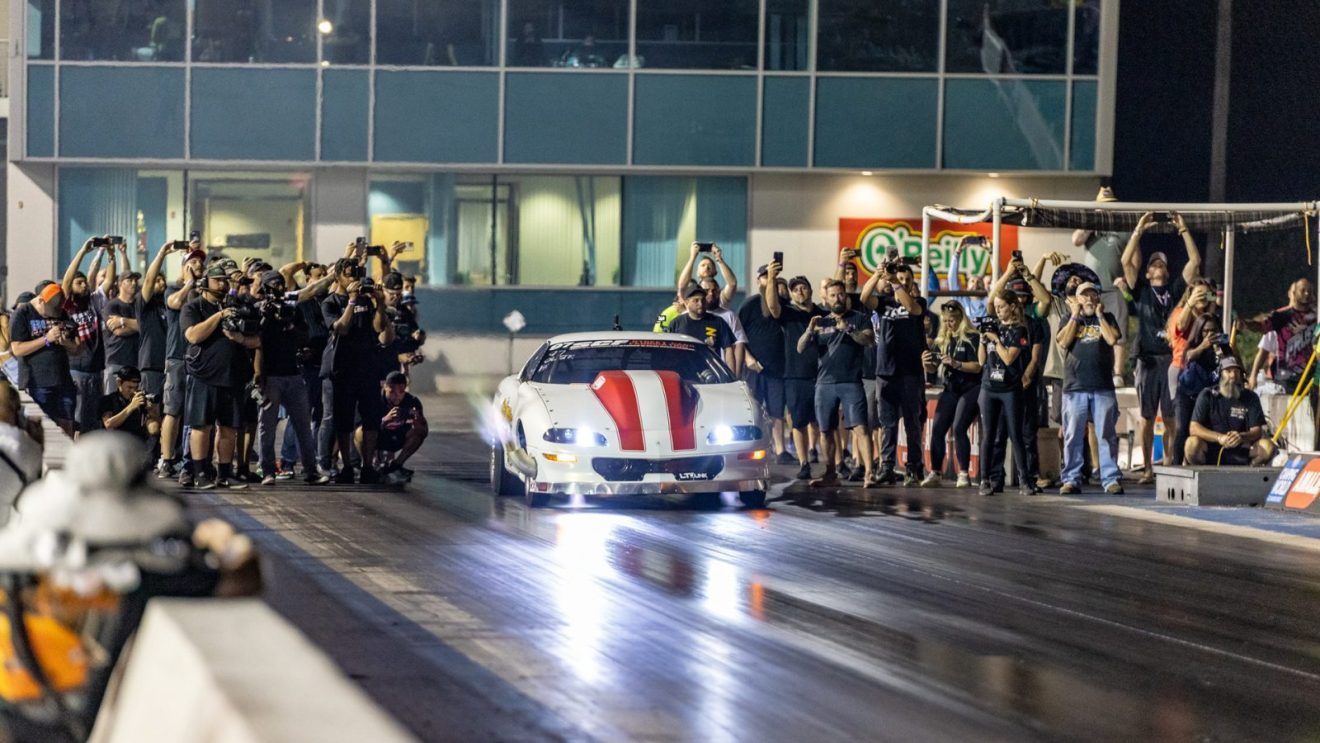 While Atkins knows his setup well enough to realize what it’s capable of, there were some new components this weekend that contributed to the unexpected jump in performance, namely a new Gen 1 Bowtie small-block Chevy engine.

“All of our racing up to this point has been using a stock block LT1, basically a 350 small-block Chevy, fully filled, no water,” Atkins said. “Very little difference between it and the Gen 1 at that point. But we’d been super-fast to the eighth, just hadn’t done a whole lot of quarter mile stuff this year and what we have done, the track was never really good enough to put it down.

“We just did a Gen 1 Bowtie block, so the engine is really close to what we’ve been running with the LT1, except our bore increased by a hundred thousandths,” Atkins explained. “We went from a 4.030 to a 4.130. That allowed us to step our cylinder heads up. It’s still the same casting, same brand, a Brodix Track 1, we just went from a 233 to a 245 and was able to get a little bigger intake valve in it. We also went with a little bigger cam from Smallwood Race Development.”

Other than two eighth-mile passes in testing a couple weeks before FL2K, the engine combination was brand-new going into the event. So far, Atkins obviously sees a lot of promise in the setup.

“It really shocked us,” he admitted. “We ran that engine a couple weeks ago at a local race and ended up breaking the transmission the second full lick that it made, so we didn’t really get any good data on getting aggressive with our 60-foot. Just the changes in the valvetrain and the cam, it seems way more efficient. It seems like it’s making a lot more power per pound of boost.”

The transmission was built in-house at Tick Performance. It’s a Tremec T56-style, face-plated-style, dog ring gear setup. Atkins admits it’s an older setup, but it’s been good for him. He uses a Tick Performance shifter, and the clutch is by Advanced Clutches.

“What’s in the car right now is actually an older clutch that we’ve had for quite a while,” Atkins said. “It’s an 8-inch twin stamp steel pressure plate, 3-lever, old-school, long-style clutch. It works great. Just like our ET, it kind of blows everybody’s mind that we’re still using that old-school clutch instead of a billet deal. We do have a billet [clutch]. We were actually testing that along with the new engine a couple weeks ago. But since we only made two hits we weren’t really comfortable coming out here with a new variable. It’s one of the key pieces to making the stick car work. We just didn’t have time to sort it out and didn’t want to do that here. We put our old stuff back in the car and went back to what we knew.”

“Fox body guys have had adjustable torque boxes forever and ever,” Atkins said. “The idea behind that is being able to get the car to sit super low and lower your center of gravity, but then still keep your suspension geometry so the suspension will separate. We run a radial, so we set our car up like any other radial car even though it’s a stick shift car.”

A stick shift car riding on radials isn’t exactly a common combination, but Atkins and his team have found a way to make it work.

“Most tire manufacturers and most anybody you talk to, even the clutch guys, they all for years have frowned upon radials on stick cars,” Atkins started, “but a couple guys before we even started doing it kind of figured that out and we followed their trend. It’s just awesome. We’ve been as fast as a 1.06 60-foot with a stick car and an old-school clutch. I hope I don’t ever put a bias ply tire back on the car. We just gotta run on sticky, good-prepped tracks.”

Yet another new component on the “Grubb Worm” this weekend is the tire. Atkins had to switch to Hoosier DR2 275/60s on 12-inch wheels when his trusty Mickey Thompson bracket radials became hard to find.

“For whatever the reason, we got kind of desperate,” Atkins said. “Our tires were getting worn to the point we weren’t comfortable coming to a big event with them. I didn’t even know the DR2 Hoosier existed. We found some on Summit and ordered them while they had them in stock. Man, they really work well. Obviously, we set the H-pattern record and had a good 60-foot and threw a lot of power at it. They’re working.”

Atkins says he’s drawn to the challenge of stick shift racing. Along with that, it’s a format he believes in and endorses as the owner of Tick Performance.

“From a tuning standpoint, it’s just another variable that lets us go from pass to pass and make adjustments,” he said. “If you had a torque converter, unless you have a bolt-together deal, it’s just not as tunable. You’re relying more on the manufacturer of that converter to set you up right, whereas we can tune for track conditions and we can change a lot of things that I don’t think a torque converter guy could. It’s just there’s a little more maintenance involved. But it’s the challenge. We do build those transmissions in house, so it’s kind of natural, if we’re going to build Tremec T56-based transmissions for racing purposes, we need to race one and show it. That’s the main motivation behind it.”

Atkins adds that he wouldn’t be able to race at this level without companies like Smallwood Race Development, Rock Solid Motorsports, Diamond Pistons, and TKM Performance. He also credits the guys at Tick Performance that help with the car, as well as his team at the track that includes his dad, Johnny, and Aaron Duncan and Josh Manning. 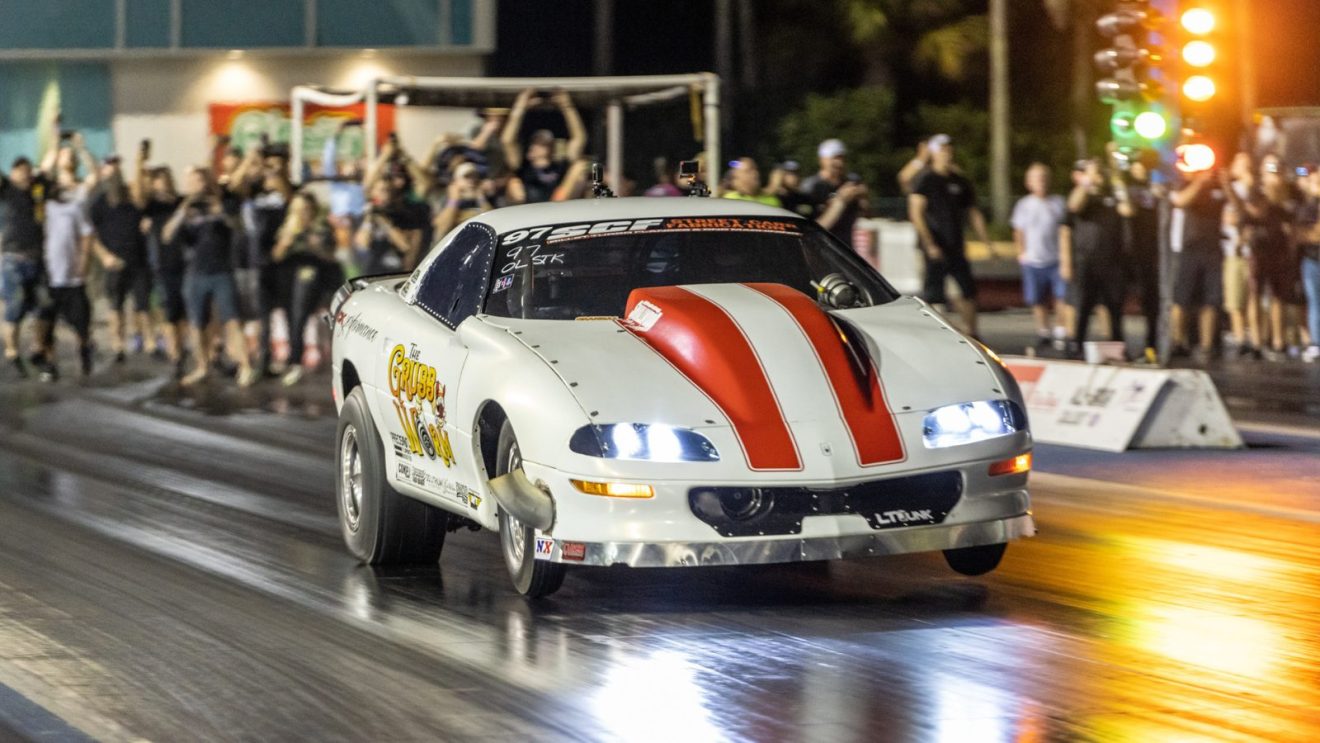 Now in Sunday eliminations, Atkins doesn’t expect to lower the record again this weekend. Another Outlaw Stick Shift competitor, Joel Grannas, has made back-to-back 6.80 passes in qualifying, so Atkins realizes he has competition. His goal is to go for the event win today, then look at setting a new record at the Miller brothers’ World Cup Finals at Maryland International Raceway later this fall.

“The record is important, but it’s not super important,” Atkins said. “I don’t think we’ll lower it this weekend. It depends on how late the race goes. To do anything in an effort to lower it, we need the sun to go down. I do think we’ll lower it at World Cup if Joel doesn’t lower it. He has a lot of new things on his chassis so he’s learning and figuring stuff out the same as we are. He’s for sure coming [to WCF], so that might push one or the other of us to really lower it even more.”