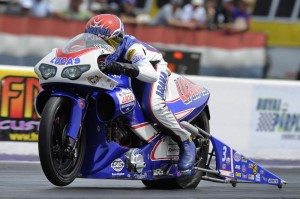 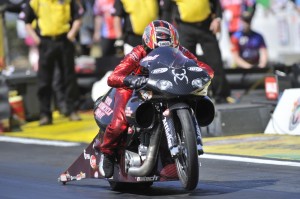 Besides the $61,000 available in the MiraMonte Records NHRA Pro Bike Battle, bonuses of $8,000 were paid to the top Pro Stock Motorcycle qualifiers throughout the eight-race qualifying process, including $1,000 to the No. 1 qualifier at each race.

Top qualifier Krawiec will race Scotty Pollacheck in the first round, while Hector Arana Jr. will face his father, Hector Arana Sr. Third seed Andrew Hines will meet John Hall, while Matt Smith will race Michael Ray in the opener.

Drag Illustrated
← Previous Story DI Warm-Up: NHRA TV Package is Getting Better
Next Story → Why You Should Sell Your Radial, Pro Mod or Grudge Car and Go Bracket Racing