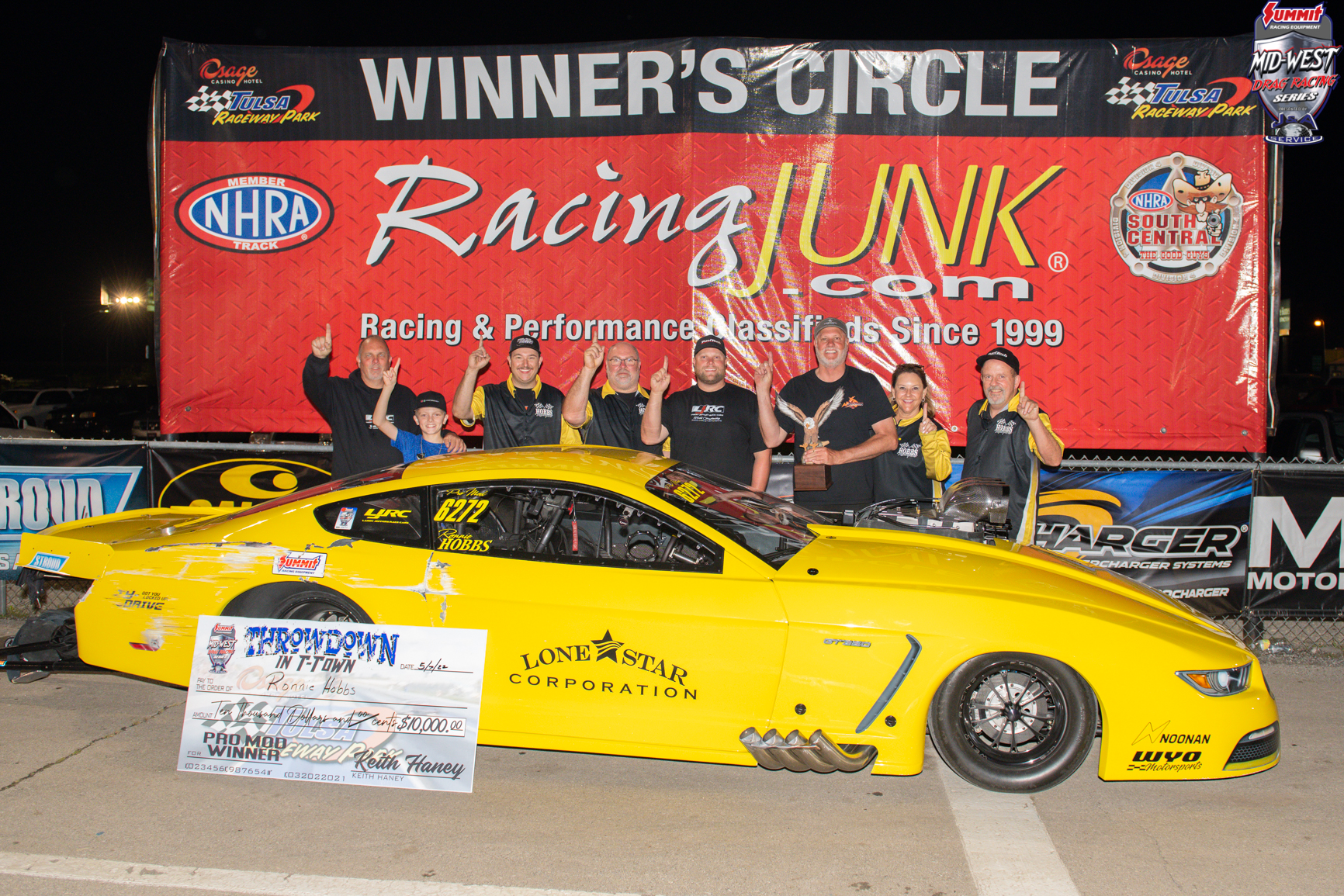 Ronnie Hobbs’ recent switch to a screw-blown, Wyo Motorsports-built engine is already paying dividends, as Hobbs drove it to multiple career-best passes on his way to victory at Tulsa. Tuned by Todd “King Tut” Tutterow, Hobbs and his “Texas Rattlesnake” ’17 GT350 Mustang qualified No. 15 before charging through eliminations to meet Daniel Pharris, the car’s former owner, in the final round. Hobbs posted a 3.645 to finish ahead of Pharris and his 3.668.

“There’s no words to express what it takes to be up against this level of competition and be successful,” said Hobbs, who defeated Stan Shelton, Tommy Cunningham, and Dustin Nesloney in prior rounds. “Everybody wants to win and there’s no amount of money that can buy a win. It takes so much more than money. It takes luck and a lot of other things. We just wanted to compete and to compete at this level. The rest has to fall into place. Not only being able to compete, but actually pull off a win at really our first race with this new combination, it’s amazing. Unfortunately, I probably wanted it a little too much and didn’t have as much experience in the car as I needed for that .64.”

Shortly after crossing the eighth-mile finish line, Hobbs scraped the right-side retaining wall but was able to get the car stopped safely. He admitted he’s still catching up to the car, which is already quicker than Hobbs’ previous career-best of 3.72 going into the weekend.

While Hobbs was chipping away at his career-bests, Pharris was consistently stepping up on his side of the ladder. Driving the ProCharger-boosted GALOT Motorsports ’69 Camaro, Pharris defeated Ed Thornton, Brian Lewis, and Mark “Tydo” Werdehausen before meeting Hobbs in the final round.

Hobbs is confident he’ll catch up quickly with more passes in the car. A lot of that confidence comes from his trust in Tutterow, who worked with Larry Jeffers Race Cars and Modern Racing to convert the car over to its current screw-blown Noonan configuration. Tutterow also made the first few test passes in the car and got it race ready.

“The confidence that I had to get in this car knowing that he’s probably not going to miss the tune and it’s going to go right down through there as long as I can drive it is huge,” Hobbs said. “There’s just a handful of guys out there, and I think most people would say Todd is one of the best in the business. The whole Wyo team has become my crew, and it’s just been a great relationship. We’re just trying to get everything to jell and win a championship with them.” 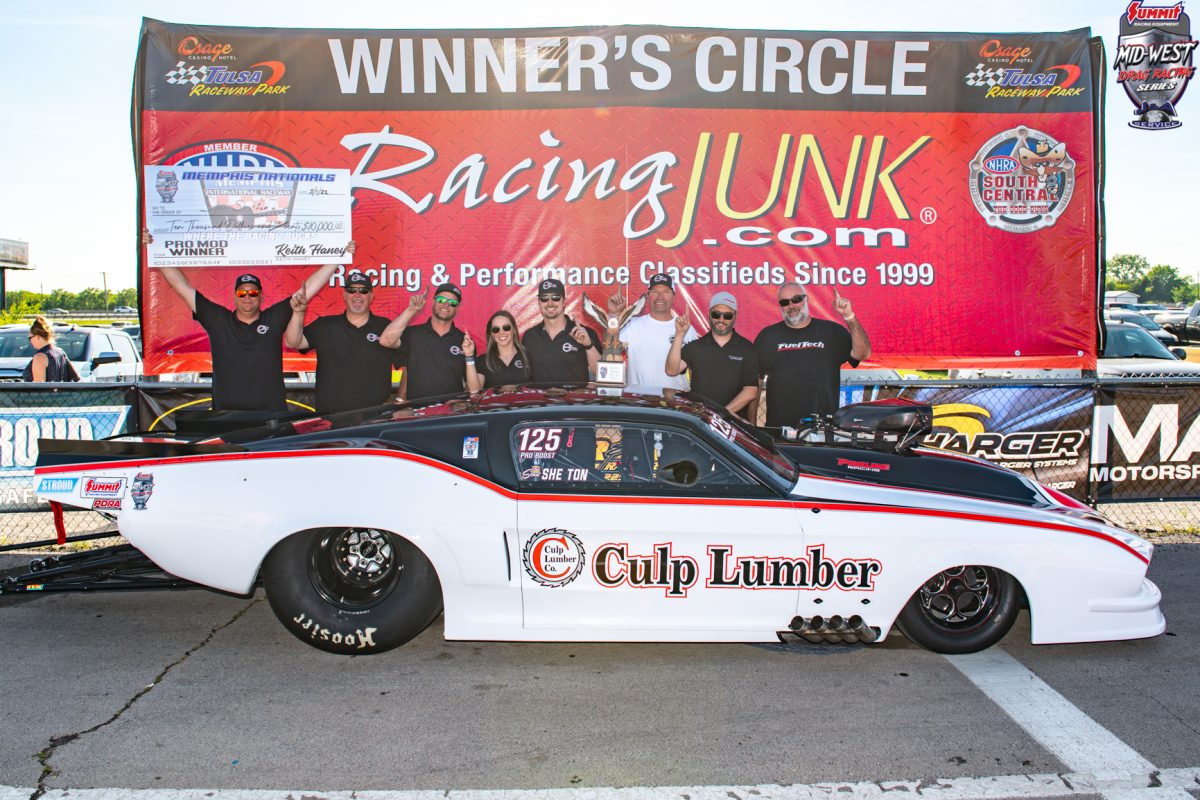 Earlier in the weekend, the MWDRS completed eliminations from the Memphis Nationals, which was postponed due to wet track conditions. Tractor pulling standout Stan Shelton secured his first career win in drag racing after beating Dustin Nesloney in the final round. On his way to the final, Shelton and his screw-blown Culp Lumber ’67 Mustang defeated past MWDRS champions Aaron Wells and Ron Muenks, as well as Steven Whiteley. Shelton recorded a 3.683 at 204.20 deny Nesloney his second consecutive win on the MWDRS tour. 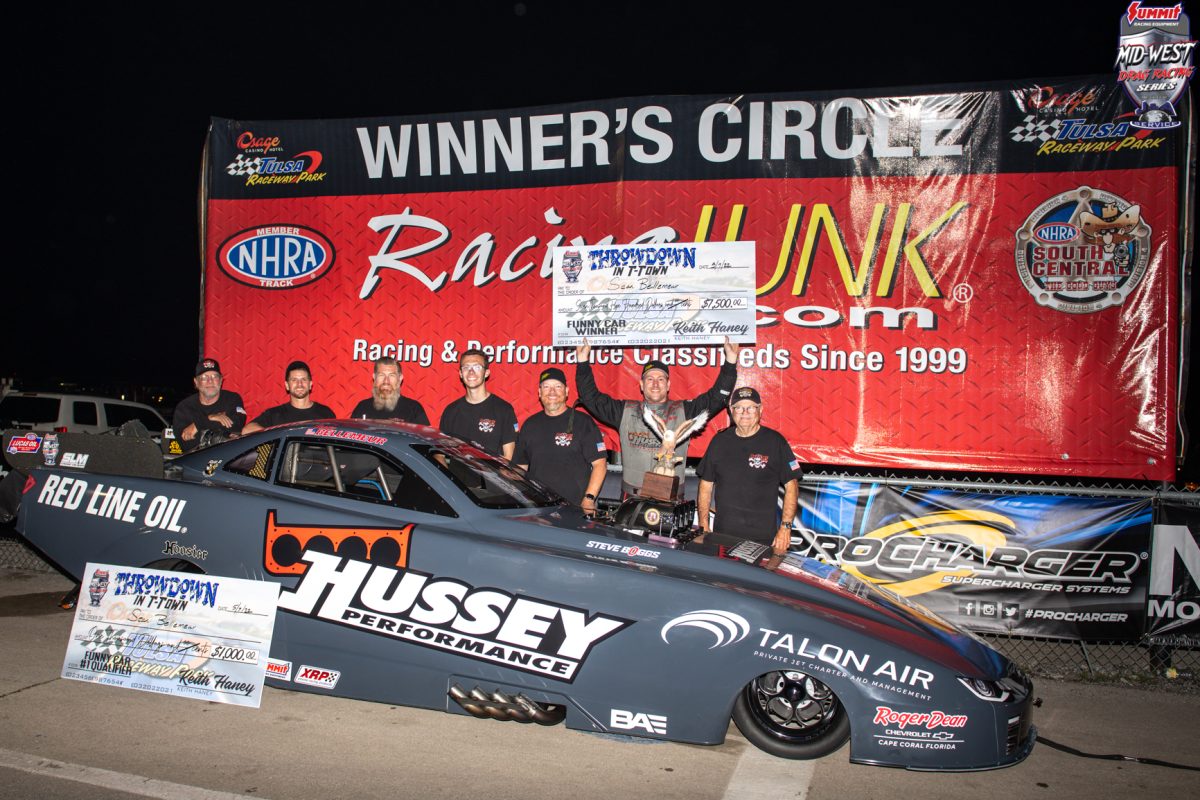 The Top Alcohol Funny Car field got a brief reprieve from the dominance of Sean Bellemeur and the “Killer Bs” team at the Memphis race, as the team chose to sit out the race to reserve parts. But Bellemeur, tuner Steve Boggs and team owner Tony Bartone were right back to their winning ways at Tulsa. Bellemeur in the Hussey Performance ’22 Camaro ran pass after pass in the 3.60s, qualifying No. 1 and winning in the final round with a 3.653 at 210.24 over Chris Marshall and his 3.732 at 205.82.

“It was typical Steve Boggs making power, the team doing what they do, and me trying to keep up as the driver,” said Bellemeur, thanking partners like Hussey Performance, Red Line Oil, Mastercam, Talon Air, and NGK Spark Plugs. “We had a little momentum coming in from our win at [NHRA] Charlotte the weekend before. We found a problem in the car while we were in Charlotte. Since we fixed that problem, the car has not had abort a run.”

Bellemeur, who won the MWDRS season opener in Texas, had to sit back and watch as most of the other TAFC competitors completed the Memphis Nationals eliminations at Tulsa during qualifying.

“Unfortunately, the availability of parts is still an issue, so we chose to sit out the Memphis race looking ahead so we can run more races in the near future, including MWDRS St. Louis,” Bellemeur said. “It was frustrating to sit there and watch the competition, but it gave us time to do a little homework and see what everybody was doing. Obviously, there was a lot of talk about Jim Whiteley now in a Funny Car. Jim’s a great driver and they’re a great team, so you know they’re going to be tough. It was neat to see them out doing their thing. Chris Marshall was tough, as was Annie and the whole rest of the Mid-West gang. It had its pros and cons, but I don’t like sitting on my hands when I’m at the racetrack.”

“It was typical Tulsa and typical Mid-West – Jimmy [Boles] and the gang, they’ve prepped that track and it’s just incredible. It’s such a good racetrack,” Bellemeur said. “If you give Steve Boggs the ability to throw everything he’s got at it, good things are going to happen for us. We were able to do that. We tried to race it one round at a time, race the racetrack, and it turned out our way.”

Marshall was appearing in his second final round of the weekend after losing to Annie Whiteley in the Memphis final. He qualified No. 2 in his Disturbed Racing ’17 Camaro and ran a pair of consistent 3.70s to beat Shayne Lawson and Steve Macklyn in the first two rounds.

Whiteley, who has multiple wins in NHRA competition, earned her first MWDRS victory in her J&A Service Camaro. She used a 3.683 in the Memphis final to beat Marshall, who slowed to a 5.001. 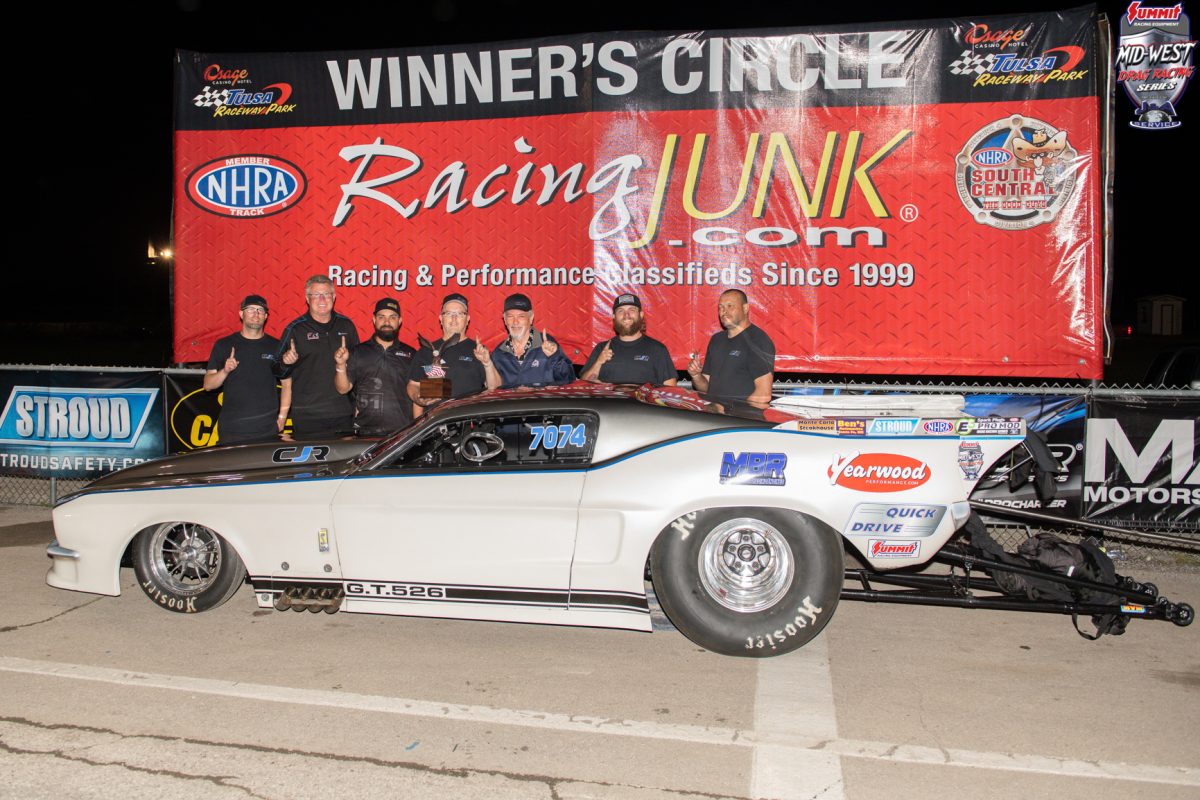 New Mexico’s Robert Costa bounced back from a DNQ in Pro Mod by racing his way to victory in the Pro Mod Slammers class, which features drivers who don’t qualify or lose first round in Pro Mod. Costa in his ProCharger-boosted ’67 Mustang ran a 3.905 in the final round, while opponent Ron Muenks lifted to a 7.725 in Dave Pierce’s nitrous-fed “Purple Gorilla” ’68 Camaro.

The Memphis Nationals Slammers final featured a side-by-side race between MWDRS veteran and track co-owner Todd Martin and series newcomer Mark “Tydo” Werdehausen, who’s driving the Zimmerman family’s twin-turbocharged “Wolverine 2.0” ’69 Camaro as a tribute to the late Tim Slavens. Martin got the win on a holeshot, running a 3.808 in his screw-blown “Lethal Acceleration” ’67 Mustang to edge out Werdehausen’s 3.80.

The spring Throwdown in T-Town was the first of two MWDRS appearances for the Pro Street class this season, with the possibility of running more events in 2023. Class proponent Dave Pierce was the star of the show, qualifying No. 1 and racing to the final round in his nitrous-assisted, former Pro Stock GTO.

Pierce posted runs in the mid-4.20s to win the first two rounds, then ripped off a weekend-best 4.238 at 166.07 to defeat No. 2 qualifier Jake Mason in the final round. Mason, who was just a couple numbers behind Pierce in qualifying, laid down his best run of eliminations, a 4.339 at 171.53, in the runner-up effort.

Pro Street will make its next appearance at the fall Throwdown in T-Town, Oct. 7-8 at Tulsa Raceway Park. 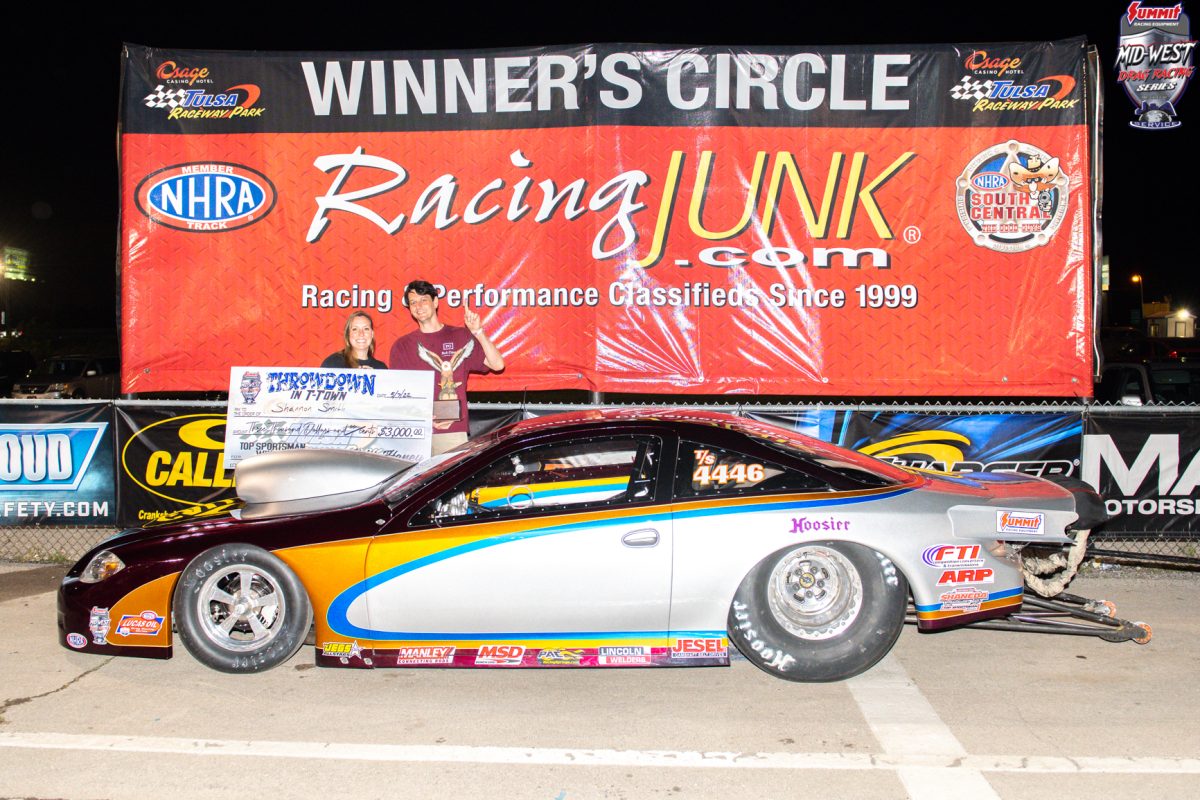 In Top Sportsman, Shannon Smith took his incredibly consistent hot rod to the final round, where he lined up against Bob Copeland. Smith was slightly behind at the starting line, but he ran a 4.489 on a 4.48 dial-in, repeating his 4.489 from the semis, to win over Copeland’s 5.074 on a 5.04 dial.

The Memphis Nationals Top Sportsman competition came down to Robert Irby and Jeff Staab in the final round. Irby scored the win.

In the Top Dragster final round from Memphis, YNot Racing drivers Anita Strasburg and Delaina Whiteley faced off, with Strasburg taking the win in her supercharged entry.

Brody Zimmerman recovered from an early exit at the season opener to score the Pro Jr. Dragster win in his Team Wolverine entry, using a quicker reaction time and an 8.074 on a 7.96 dial-in to beat Kaelee Brudidge’s 8.044 on a 7.95 dial-in. It was Zimmerman’s second consecutive winning weekend, as he also recently won a points race at his local track.

The Throwdown final in Top Jr. Dragster saw Kale Moberly defeat second-generation MWDRS racer Kenzie Wells. Moberly was first off the starting line and followed through with a 9.038 on a 9.01 dial-in, while Wells broke out slightly with an 8.918 on an 8.92 dial-in.

The Wells family still walked away from the Throwdown with a win, though, as Tyler Wells was victorious in the Memphis Nationals Top Jr. Dragster final round, beating Eli Reed in the final round. Wells also won the MWDRS season opener in Texas.

The MWDRS season will pick up again in a month at the Great Bend Nationals, June 3-4 at SRCA Dragstrip in Great Bend, Kansas.