Byron Hines is the seventh and final member to be inducted into the AMA Motorcycle Hall of Fame, Class of 2014. One of the most successful engine builders in motorcycle racing, Hines earned national drag-racing titles and co-founded the tremendously successful Vance & Hines aftermarket company alongside racer and current AMA Motorcycle Hall of Famer Terry Vance. Hines was elected to the Design/Engineering category. 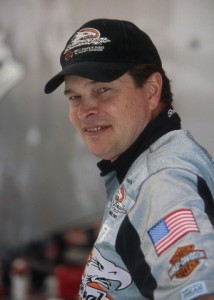 “One mark of exceptional talent is the ability to forge success regardless of your circumstances,” said Ken Ford of the Hall of Fame executive committee. “As a tuner, Byron Hines has won in the 1970s, ’80s, ’90s and 2000s. He has won in drag racing and road racing.

“He has won on brands as different from each other as Yamaha, Ducati and Harley-Davidson,” Ford continued. “Few understand the ingredients to long-term success in motorcycle racing as well as he, and it’s my pleasure to welcome Byron Hines to the 2014 class of the AMA Motorcycle Hall of Fame.”

Vance & Hines is based in Santa Fe Springs, Calif., and remains competitive in professional racing to this day. With a lengthy and well respected history in drag racing and road racing, the company develops and sells aftermarket products for a wide range of motorcycles. Hines is still directly involved in all aspects of the business.

“Being inducted into the Hall of Fame is a huge honor, but it feels a little odd because I’m not done yet,” Hines said. “Being in a competitive arena, it seems like you’re never done. You’re going to keep doing what you’re doing and striving to be the best at what you do.”

The 2014 AMA Motorcycle Hall of Fame Induction Ceremony will be held on Oct. 17, in Orlando, Fla., and is part of the AMA National Convention being held in conjunction with the American International Motorcycle Expo (AIMExpo) Oct. 16-19.