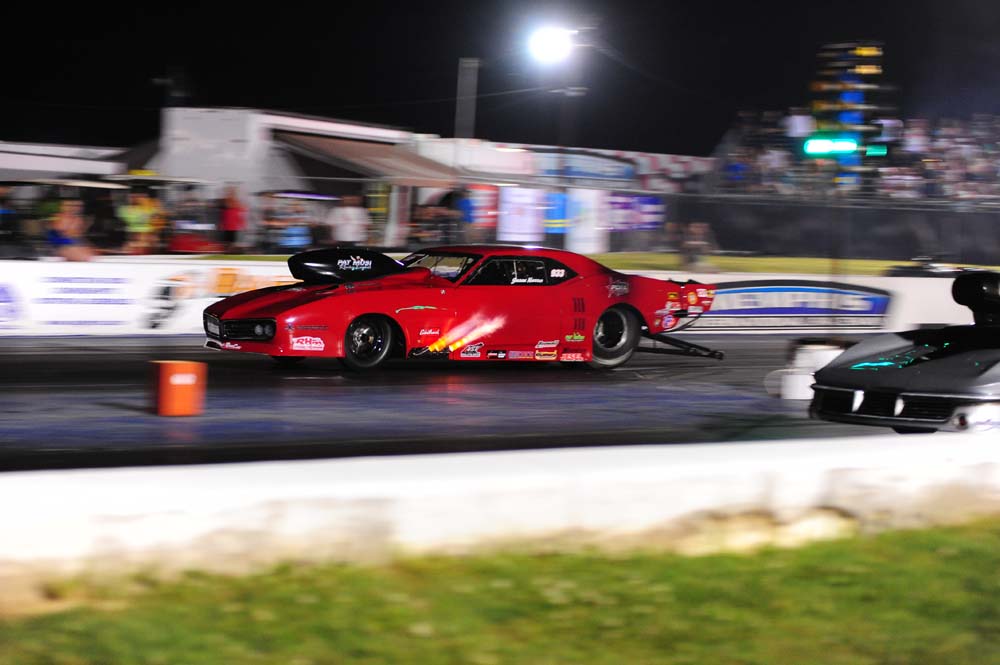 Texas racer Randell Reid won the first Pro Extreme race of his career May 24, at the inaugural Professional Drag Racers Association (PDRA) Memphis Drags. Also picking up pro class wins at Memphis International Raceway were Jason Harris (above) with his third-straight PDRA Pro Nitrous event title, John Pluchino with his second Extreme Pro Stock victory of his career, Eddie Rogers breaking through in Pro Boost and Eric McKinney with his first win of the year in Pro Extreme Motorcycle. 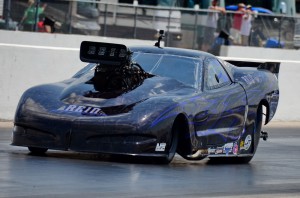 It wasn’t exactly the way Randell Reid envisioned winning his first NAS Racing Pro Extreme race. The oil man from Iowa Park, TX, was awarded the Memphis Drags title just for starting his car and breaking the starting line beam after Bubba Stanton, winner of the two previous PDRA events, was unable to answer the call for the final round.

“I wish we could’ve matched up with him, but that’s the way the cards fell,” Reid said of Stanton breaking a connecting rod in his ’69 Camaro’s engine at the end of a 3.59-second win over Mike Recchia in the semis.

With not enough time to swap out the engine for the final, Stanton and team owner Roger Henson were forced to concede their third-straight, final-round appearance after winning both previous races. “There’s still no one who’s actually beat us,” Henson quipped as he wiped spilled oil from the car’s firewall.

In eliminations, Reid upset fifth-place starter Bader Ahli with a 3.640 pass in round one, then improved to 3.618 to beat former class champ Mick Snyder in round two before meeting Scruggs and his formidable ’63 Corvette in the semis. Once there, Reid took a sizable .062 advantage off the starting line, which was enough to allow his 3.613 at 212.09 to beat Scruggs’ quicker and faster 3.571 at 214.62-mph effort by a hundredth.

“He’s one of the fastest guys in the world in these kind of cars, so it felt really good to do that,” Reid said. “We were getting faster with each pass, too, so I think we would’ve had something for (Stanton) if we had got to run him.”

The Memphis event was just the second of the year for Reid, who finished runner-up to fellow Texan Frankie Taylor just one week earlier in Tulsa, OK. 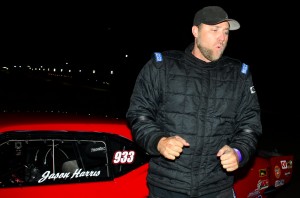 Jason Harris could barely believe he managed to keep his perfect record in Switzer Dynamics Pro Nitrous competition intact, but there he was at the top end of Memphis International Raceway’s eighth mile, a three-time winner after beating Pat Stoken in the final round of the PDRA’s third race in its inaugural season.

“It’s unbelievable, just crazy. I was sitting up there thinking there’s no way we can win a third time in a row. I mean, I felt lucky just to get to the final again,” the Pittsboro, NC, racer admitted after qualifying his ’68 Firebird third, then going through Jim Sackuvich, John Camp and Lee Adkins to reach Stoken.

“We’d been fighting some issues all day long and it broke something there in the lights there, too. I heard a bang, so maybe something in the transmission,” Harris noted after going 3.798 at 196.04 mph to win with a holeshot over fifth-place starter Stoken’s 3.789 at 200.47-mph combo. 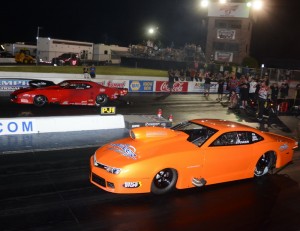 Stoken began his path to the final with an opening-round win over Edward Wilson before overcoming a holeshot by David Janes in round two and making a solo pass in the semis after Janes’ teammate Tim Savell was unable to continue.

Bu Harris was ready and waiting for Stoken and his 2014 Camaro.

“Man, I’m on top of the world right now, which is a little bit scary because it feels like there’s only one way to go from here and I’m afraid that’s down,” Harris said later. “But man, what can I say? Robert Hayes Motorsports, Pat Musi horsepower, Hoosier tires, they’re all giving me the ride of my life right now. It’s awesome!”

Commack, NY’s John Pluchino last won an Aruba.com Extreme Pro Stock race more than a year and a half ago, so he felt more than ready to revisit victory lane at the PDRA Memphis Drags.

“Yeah, it’s been a while and we had a lot of problems at the last race in Georgia, couldn’t get down the race track, so we changed a bunch of stuff around and came out here and we ran good,” Pluchino said.

After qualifying his ’06 Ford Escort fourth of only seven entries to the class at Memphis, Pluchino overcame a starting-line advantage by Scott Hintz in the opening round, then turned the tables on Goforth Racing teammates Jeff Dobbins and Cary Goforth in the semis and final round at Memphis.

“Yeah, the old man drove pretty good,” Pluchino declared with a laugh. “We were pumped up; we knew he could run pretty fast, but we could run fast, too, if we hit it just right. But we were just a little off with the clutch, so we did it with a holeshot instead. Feels pretty good.”

After qualifying his ’06 Corvette on top of the PDRA’s unique Precision Turbo Pro Boost class with a 3.868-seconds pass at 190.57 mph, Eddie Rogers discovered a torched head on his roots-blown 521 c.i. Hemi Friday night at Memphis International Raceway. Unable to find a replacement BAE head to match the opposite engine bank, Rogers opted instead to make a trackside emergency purchase of a pair of unfamiliar-to-him Noonan Race Engineering heads from fellow racer Todd Martin.

“Here we were with a brand-new blower from Troy Critchley at Hammer Superchargers, a whole new fuel system and now we’re putting on new heads. I’ve got to admit, I thought we could still do okay, but I never really thought we would win,” Rogers said after going all the way with a 3.862 run at 192.11, his quickest and fastest of the weekend, to edge out Joe Baker’s 3.917 at 185.69 in the PDRA Memphis Drags final.

“We had a major thrash last night and we were all beat-down tired, but we kept at it and made it through. I’m real proud of our whole team right now,” Rogers said of wife Joyce, stepdaughter Amanda, who handles the tune-up on the Hemi, grandson Jordan, and chassis builder Chris Duncan, who built his car.

With only 15 Pro Boost entries at Memphis, Rogers had a bye run in the opening round, which turned out to be his key to winning.

“If we hadn’t had that bye run, we’d have been out. We lost an air line and because of that we didn’t have any transbrake or throttle control, so if we’d have been running somebody we’d have been out for sure in round one,” Rogers explained. “But after that it all went smooth; the car went straight as an arrow, everything worked just like it should, it was pretty much perfect after that.”

Fittingly, the numbers one and two qualifiers met in the final of Pro Extreme Motorcycle and it was a familiar face in victory lane at Memphis, as past two-time class champion Eric McKinney took the win with a 4.054 pass at 177.93 mph astride his 2012 Suzuki.

Top qualifier Terry Schweigert from Abbotsford, BC, in Western Canada, ran 4.095 at 171.25 in the final, after making a bye run and dispatching Jeff House and Jay Fisher to get there. McKinney previously ousted John Collins before making his own bye run, then beating Casey Stemper in the semis.

Despite the win, a somber McKinney first thanked America’s military members, past and present, with a Memorial Day Weekend reminder of their service and sacrifices.

“Without our Armed Forces we couldn’t do what we get to do,” McKinney stressed. “They do things and go places, sometimes for months or even years away from their families, that most of us never have to do anything like that. I just think it’s important to remember and recognize that sometimes.”

McKinney also expressed sincere concern for the health of his chosen class.

“Our next PDRA race is up in (Martin), Michigan, which is actually pretty close for us, only six hours or so,” the Homersville, OH, rider said. “But I know it’s a long haul for a lot of the guys we race with who mostly live down south. I just hope we get a decent motorcycle count up there.

“I hate to say it, but I know we played a part in (causing dwindling PXM fields) by winning quite a bit, but you know, we work hard at this. And I don’t mean just among the bikes; I would put our team up against anybody on the property, car guys. We changed two motors this weekend, I broke two sprockets; I mean, we don’t stop, but that’s because I don’t want to be beat; I just want to win if we’re going to work this hard.”

Canada’s Toni Moretto qualified his sharp-looking ’55 Chevy on top of a stout 16-car Magnafuel Top Sportsman field in Memphis, but it was Cynthiana, KY’s Cheyenne Stanley and his ’07 Mustang that were standing tall at the end with his second PDRA final-round win of the year, beating Bob Mandell in another beautifully prepped ’55 shoebox.

After dialing in at 4.25, Stanley won with a 4.273 pass in the final, deliberately backing off at the stripe to avoid breaking out after Mandell shook the tires and had to shut off early. 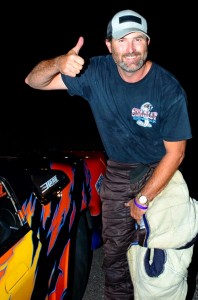 Mandell’s son, Jeff, brought the STT Safety Equipment Top Dragster trophy home to Culleoka, KY, though, winning from the fifth starting position with his Pro Fab-built dragster over 15th-place qualifier Gary Bingham in the final. After leaving with a .032 light, Mandell ran dead on his 4.22 dial in, while Bingham left with a .053 light then went 4.672 after dialing in at 4.66 seconds.

Running against a 7.90 index, Jake Thurwell of Richmond, IL, ran a near-perfect 7.904 in the Huddleston Performance Pro Jr. Dragster class to beat a breaking out 7.877 by Jimmy Sackuvich in the final. The Huddlestone Top Jr. Dragster win went to Woodbridge, VA’s Mia Schultz, whose team also picked up Best Appearing crew honors at the PDRA Memphis Drags.

The PDRA returns to action June 27-28, when it visits U.S. 131 Motorsports Park in Martin, Michigan, for the inaugural PDRA Summer Drags. Complimentary tickets will be available at many retail outlets near the track, or may be printed for free from www.pdra660.com/free-tickets/2014/summer-drags.