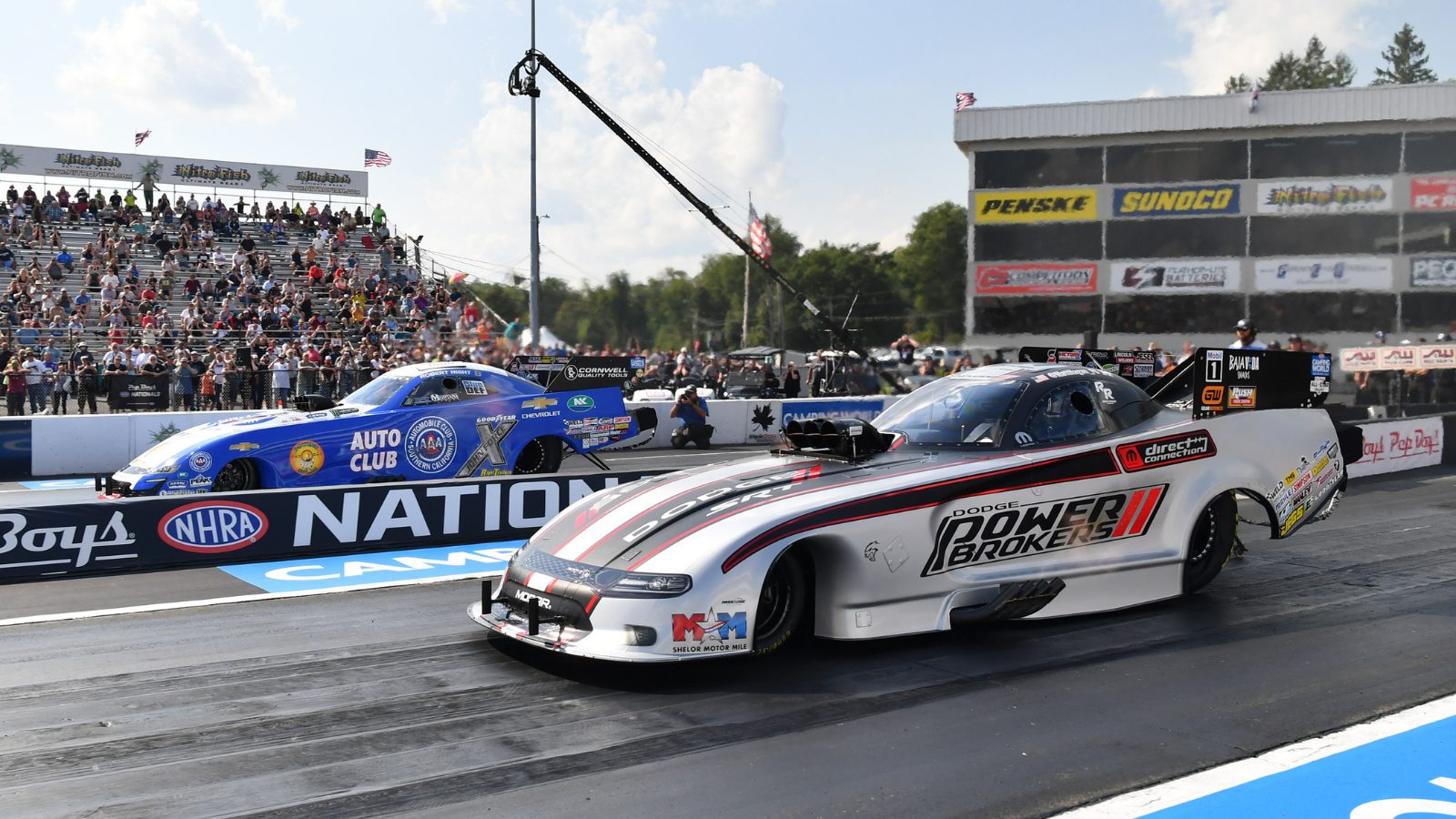 Hagan got things started at Maple Grove Raceway by qualifying his Dodge Power Brokers Charger SRT Hellcat fifth on the eliminations ladder with a solid 3.906-second elapsed time run at 326.32 mph. On race day he drove his way through to the semifinals by recording round wins over No. 12 seed Jim Campbell and No. 4 qualifier Bob Tasca to face No. 1 qualifier Hight. The two semifinal competitors launched and battled closely until a loss of traction slowed Hagan’s progress and dashed any hope of advancing further.

Hagan’s eliminations performance at Reading put him and his HEMI®-powered Hellcat second in the playoff standings, 81 points behind event winner and category leader Hight with five races remaining to battle for the 2022 Funny Car World Championship.

TSR’s Top Fuel driver Leah Pruett, who earned a Wally trophy in the regular season at the Dodge Power Brokers Mile-High Nationals in Denver, got her playoff run started at Reading aboard her Rayce Rudeen Foundation Dodge//SRT dragster from seventh place in the Countdown standings. In qualifying, Pruett improved her ride with each pass, added a valuable bonus point with the third quickest run of the second qualifying session at 3.736 seconds at 328.62 mph, and put herself tenth on the eliminations ladder with a 3.734 second/328.38 mph lap.

Her opponent for the opening elimination round of the Countdown was No. 7 qualifier Doug Kalitta but while the pair both had good starts, Pruett saw her hopes of challenging for the round win go up in tire smoke. With the results, Pruett finds herself tied with Kalitta for eighth in the Top Fuel championship standings, 107 markers behind playoff points leader Justin Ashley.

Fellow Dodge//SRT driver Cruz Pedregon, a two-time Funny Car world champion, is also in the playoff hunt and started off the weekend at Maple Grove Raceway seeded eighth in the Countdown. He drove his Snap-on Tools Dodge Charger SRT Hellcat to a best qualifying run of 3.931 seconds at 319.45 mph to put himself in the No. 8 seeded position for Sunday’s competition.

Pedregon turned on win lights in the opening round against No. 9 seed Paul Lee with a 3.918 second elapsed time run at 326.40 mph to advance to a quarterfinal meeting with No. 1 qualifier Hight.

The pair had identical reaction times of 0.085-seconds, but the Cruz Pedregon Racing machine began to lose traction early in the run and was unable to continue to challenge. With the quarterfinal performance, Pedregon remains eighth in the playoff standings, 151 points behind the Funny Car points leader.

The NHRA “Countdown to the Championship” continues next weekend with the second of six playoff series events, the Betway NHRA Carolina Nationals, at zMAX Dragway in Concord, N.C., Sept. 23-25. FS1 will air qualifying highlights on Friday, Sept. 23, at 7 p.m. ET and Sunday, Sept 25, at 2 a.m. ET, while race day coverage begins at 3 p.m. ET.