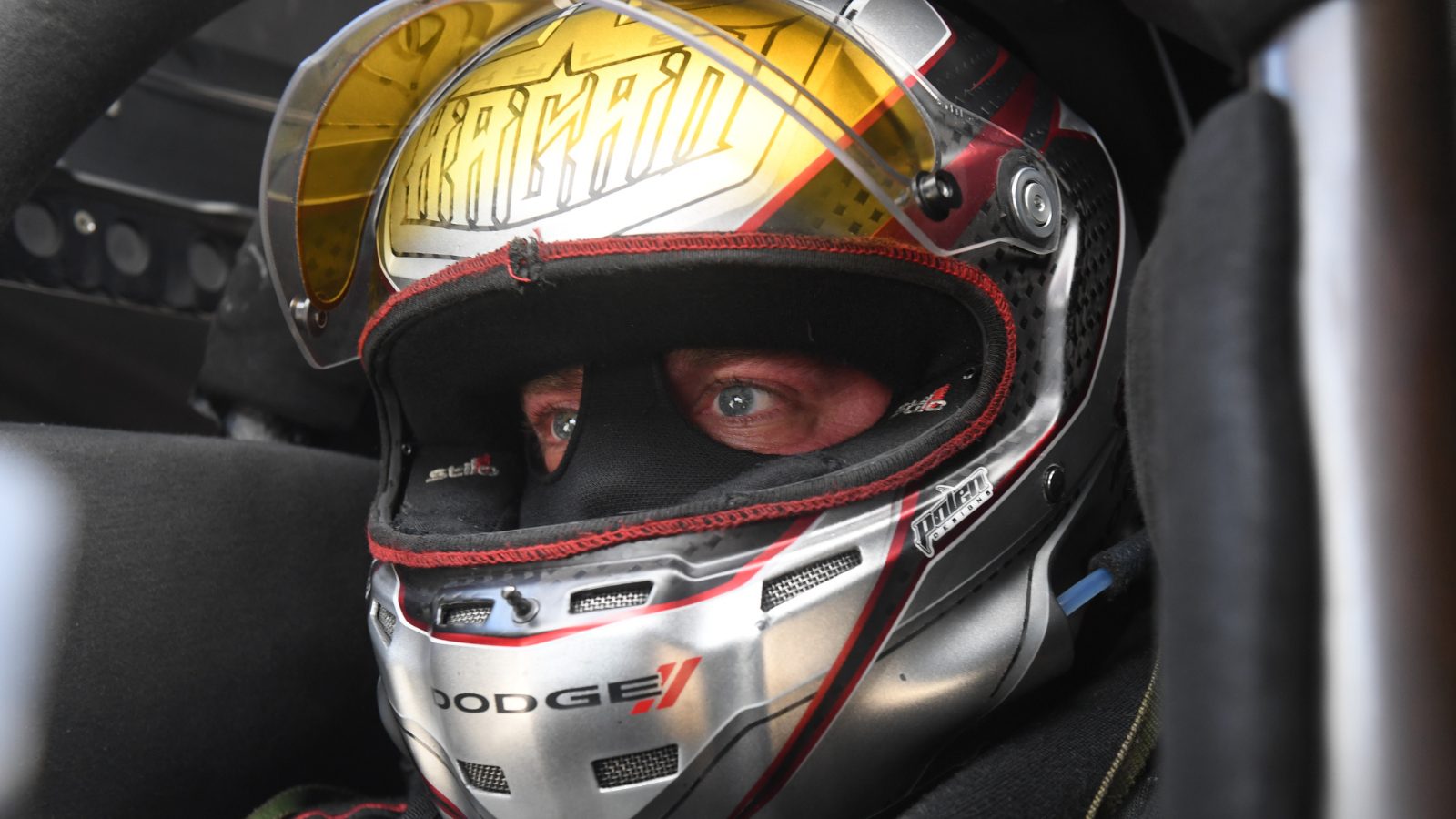 Hagan and his Dodge Charger SRT Hellcat were among eight Funny Car drivers to take part in the race-within-a-race battle for bragging rights and $80,000 cash prize. For his first pick, Hagan “called out” and defeated Alexis DeJoria as payback for defeating him in the semifinals of 2021 NHRA Finals at Pomona to end his championship bid.

Hagan moved on to the Callout semifinals, which did not count as an official qualifying run, to battle Robert Hight against whom he had the starting line advantage and turned on the win light with a 4.180-second run at 255.73 mph while his opponent (10.119/82.57) lost traction at the hit of the throttle.

Advancing to his first final elimination in five career specialty race appearances, Hagan staged his HEMI-powered ride next to Ron Capps who had earned lane choice with his previous run. The two competitors had an exciting side-by-side battle with Hagan’s quicker 3.900 sec./328.86 mph run overshadowed by Capps’ deep stage starting line advantage and slower 3.936 sec./ 330 mph pass for the holeshot win and a four thousandths-of-a-second margin of victory.

While disappointed with the runner-up result, Hagan was pleased with his team’s efforts during the five qualifying opportunities they had to prepare his Dodge Charger SRT Hellcat to put him in the top half of the eliminations ladder for the legendary event known as the “Big Go”. His best qualifying performance came Saturday night with a 3.892 sec./333.41 mph pass to put him in the No. 7 spot and set up a first round meeting with DeJoria in his quest for a second (2016)  Dodge Power Brokers U.S. Nationals title win.

TSR pilot Leah Pruett will begin her race day from the No. 10 spot on the Top Fuel eliminations ladder after recording her best lap of 3.725 sec./332.51 mph aboard the Dodge Power Brokers dragster in the Saturday evening session. She’ll have Billy Torrence as her first round opponent as she begins the pursuit of her first Dodge Power Brokers U.S. Nationals Wally after coming close with her runner-up performance in 2020.

A three-time winner at the world’s biggest and best known drag racing competition, Cruz Pedregon qualified his Snap-on Tools Dodge Charger SRT Hellcat No. 9 on the Funny Car eliminations ladder with a 3.906 second effort at 324.83 mph, the fifth quickest run of the first session of the weekend. Pedregon will stage next to J.R. Todd for the opening round of the Labor Day classic.

Dodge Power Brokers U.S. Nationals eliminations coverage will begin Monday, Sept. 5, on FS1 at noon ET, continue on FOX at 2 p.m., and conclude with live final round action. Fans can also view all on-track activity in real-time via NHRA.TV and its subscription-based, video-on-demand coverage throughout the event.

“I’ve always said nothing is impossible when it comes to Indy, and learning curves and luck are not excluded from that statement. We started off on track with our strategy of running a solid Friday night pass to get us in the field with a 3.76 second run. The plan was to improve from there but as we worked to add speed to the car down low, it was not as cooperative as we would have liked. Instead it applied more abrupt power than we wanted, resulting in tire smoke in Q2. Finding a middle ground with great conditions, we ran a safe 3.72 and we’re again at our performance baseline to continue to improve in Q4. Again we experienced rapid power application and smoked the tires.

“With the final qualifying session approaching and room to push the envelope, we continued down the path of trying to run a high 60 but the undetectable ghost of electronic woes bit us. Our clutch controller is software input driven and ground based, and a select portion of that program, crucial to the tune up setup, did not engage. Basically our bearing never moved and we never got to broker our power to improve our 10th position. God’s department of thunder must have been looking out for us as we were the last pair to go down the track before it rained and they called it a night. Thankful we were able to identify the issue when we got back, but we are still looking for solutions. That may include swapping a full management system. I have total faith in my Neal Straughsbagh-led crew. We will head into raceday with a solid tune, on-point driver and crew, and prepared for the Friday of Mondays.”

“What a wild week in Indy. We’ve been nonstop with Dodge drive events, media, autograph signings, the Pet Boys NHRA All-Star Callout and trying to get the car qualified. It’s been a wild weekend for racing. Today felt like a race day going to the Callout final against (Ron) Capps  and we’ve got to get ready to race again tomorrow. It’s kind of a different feeling. It was a really good drag race and a great show for the fans that came to watch qualifying at the Dodge Power Brokers U.S. Nationals, but it’s a tough pill to swallow when you look at a holeshot loss like that and you do the math and know what really happened. In the end we know we’ve got a good car for tomorrow and that’s really what counts. Obviously we would have loved to win the Callout and put the Dodge Power Broker car in the winter circle and celebrate tonight but it just wasn’t our day and those guys over there ran really good. So hats off to them.

“I do feel confident about our Dodge Charger SRT Hellcat and what we’re doing and the direction we’re moving in. I know that we’re going to have a great race car for race day on Monday. The car is responding well, it’s driving well, it’s handling well, the crew chiefs are making calls and it’s responding to that.

“We started off the weekend with a lot of problems. We had a motor change in the warmup and we had parachutes falling off a race car and not working, so a lot of adversity to get through to start the weekend. Then to come out here and go to the finals in the All-star Callout, I think is moving in the right direction. Dickies Venables is doing a great job getting the car back on track and moving forward. I’m excited about tomorrow. Obviously we hate that we didn’t get it done for TSR and Dodge Power Brokers, but at the end of the day we’ve still got another shot at it tomorrow and we’re going to get it done.”

“We started out great in qualifying. Our Dodge Charger SRT Hellcat ran exactly what we wanted it to run; a 3.90 (second run) at 324 mph, but it did have a couple of cylinders out at the finish line. We smoked the tires twice Saturday because we were pressing. It’s that time of year where we’re going forward but we came up a little short there. Today we felt good going into the Callout race but it dropped a cylinder. It’s kind of been a little bit of an issue with us lately. There are a lot of variables so we’re kind of like searching for a solution but I have all the confidence in the world in (Crew chiefs) JC (John Collins) and Rip (Reynolds). They’re going to figure it out and we’ll just have to ride out this little bit of bad luck that we’re going through right now.

“It was nice to be in the NHRA All-Star Callout among the top eight cars, but tomorrow is a new day. I’ve won the Dodge Power Brokers U.S. Nationals three times and to try to do it again we’re going to have to come out and do the cliche ‘one race at a time’ and ‘I don’t care who we race’  thing and see how we do. There’s a 3.88 or 3.89 in his car. I know it’s there and hopefully we can bring it out tomorrow.”