Matt Hagan powered to the top in Funny Car qualifying in the final pairing on Saturday at Brainerd International Raceway, securing the No. 1 position for Tony Stewart Racing at the 40th annual Lucas Oil NHRA Nationals.

Paired with points leader and provisional No. 1 qualifier Robert Hight in the final qualifying session, Hagan delivered a massive pass of 3.843-seconds at 331.36 mph in his 11,000-horsepower Mopar 85th Anniversary Dodge Charger SRT Hellcat, picking up his fifth No. 1 qualifier of the season and 48th in his career. Hagan had identical runs of 3.893 in the second and third qualifying sessions, but his team, led by crew chief Dickie Venables, stepped up in a major way to close out the day. That gives Hagan, the defending event winner in Brainerd, plenty of momentum heading into raceday as the team appears to have found its footing after some struggles earlier this summer.

“It’s impressive to do that, especially with the sun shining,” said Hagan, who has three wins in 2022. “That’s a testament to this track and the NHRA prep. I just think of what we might have been able to run if the cloud cover had stayed out. We’re in a great spot tomorrow. We need to make sure we stay No. 2 (in points) and make sure we start the Countdown to the Championship in a great position. The track is tight, and you can apply the power. These are the conditions that Dickie loves. I was happy when we ran two 3.89s in a row but Dickie wasn’t. He went for it and it stuck.”

Hight put together an outstanding pass as well, going 3.861 at 331.94 to qualify second. That gave the points leader three stellar runs during qualifying as he aims to pick up his seventh victory this season. Bob Tasca III nearly qualified No. 1 for the third straight race, going 3.862 at 333.74 in the pair before Hagan and Hight matched up on Saturday. He qualified third, looking for his third win in four races. Ron Capps, the defending world champ, took fourth with his 3.885 at 328.46 as he looks for his seventh victory at Brainerd. Cruz Pedregon jumped to fifth in the final session thanks to his 3.888 at 326.16. 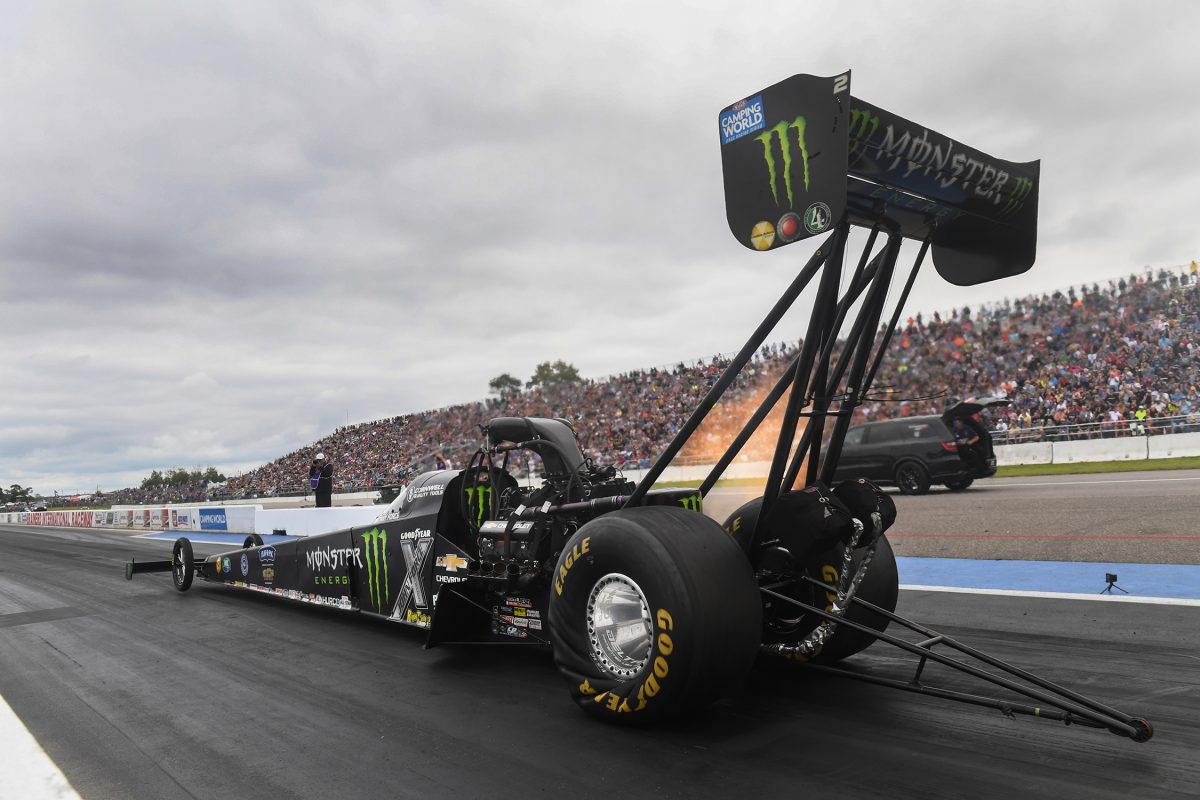 Force turned in another outstanding day of qualifying in Top Fuel, securing her sixth No. 1 spot this season and 38th in her career with a run of 3.661 at 334.65 in her 11,000-horsepower Monster Energy dragster. That run came during the first session on Saturday as the Top Fuel points leader built on Friday’s run, nearly breaking her track speed record in the process. She made a series of strong passes during qualifying as well, putting her in a good position as she looks for her fifth victory of the season and second at Brainerd.

“This team has had some killer runs and we’ve been very consistent,” Force said. “That last (qualifying) run, we were trying to push a little bit more. Overall, though, we kept that No. 1 and put some solid passes on the track. We love being able to have four qualifying sessions. It gives us a chance to learn as much as possible about the track. We had three really good passes and collected some points and got ourselves to the top spot. I’m feeling good going into tomorrow with this new car as well. We like it so far.”

Josh Hart vaulted to the second position on Saturday, going 3.668 at 332.34, which are career-best numbers in both categories. Hart is seeking his first victory of the season. Justin Ashley also improved with a massive run on Saturday, going 3.679 at 334.82 during the final qualifying session, just missing out on the track speed record. Defending event winner Steve Torrence picked up in his final run of the day as well, going 3.694 at 331.45 to slot the four-time defending world champ fourth. Topeka winner Antron Brown rounded out the top five with a run of 3.701 at 329.83, which is his quickest pass of the 2022 season.