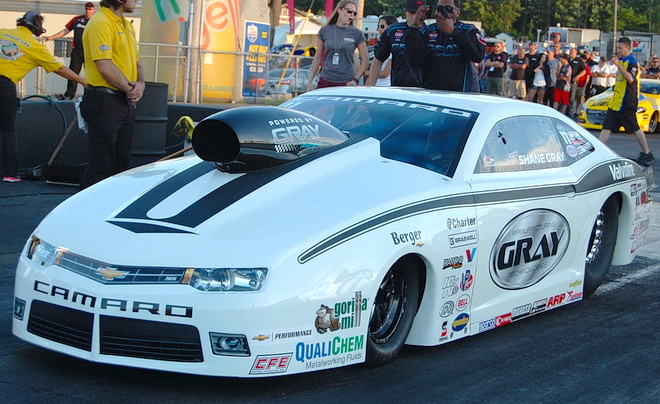 Shane Gray and his motivated Gray Motorsports team were once again the best when it mattered the most during qualifying, capitalizing on excellent conditions at the 2nd annual Auto-Plus NHRA New England Nationals to earn their second consecutive low-qualifier award. Gray will start from the No. 1 position for the second time in his career and race Val Smeland in the first round on Sunday (June 22).

Gray’s best run – and the stellar moment that put him at the top of the pack – was a track record 6.485-second pass at 212.70 mph in pristine, crisp and cool conditions on Friday as the sun set on sea-level New England Dragway in Epping, NH.

Although he did not improve on the incredible numbers on a warmer day, he and his Justin Elkes-led team had already set the bar high; their position was protected. Select few even came close, although Gray Motorsports teammate Dave Connolly made the quickest run of the final session of qualifying in a very good effort.

“I’m real proud of my team – these Gray Motorsports guys are something else,” said Gray, who enters race day fifth in the series standings. “The sun was out today so the track was hotter, and it was going to be tough to do what we did last night.

“That Friday night deal is that one session to get in there as good as you can, and thankfully, the team was able to take advantage of it and we put the Gray Manufacturing Camaro on top. There are about eight cars racing out here nowadays that can do what we did, but we were able to do it on Friday night, and that made all the difference.”

It was only seven days ago that Gray put his Gray Manufacturing Chevrolet Camaro on the pole at Bristol Dragway, and last weekend Gray was dispatched in the second round by his brother, Jonathan Gray. A similar ladder is on tap for Sunday in Epping, but this time Gray is obviously hoping for a better outcome – regardless of who is in the other lane.

“I had plenty of motivation last weekend, but maybe this time luck will be on my side,” said Gray. “If it’s Jonathan in the other lane, the good news is that one of our Gray Motorsports Camaros will be in the semifinals. As a team, that’s a good thing.

“The first thing we have to worry about is getting by first round. You know, one day you’re the chicken out here, and the next day you’re the feathers. It’s tough. But I’m excited for tomorrow, and I am real happy for my guys and all the guys back at the engine shop. I just want to say thanks to them, because without them, we wouldn’t be here right now.”