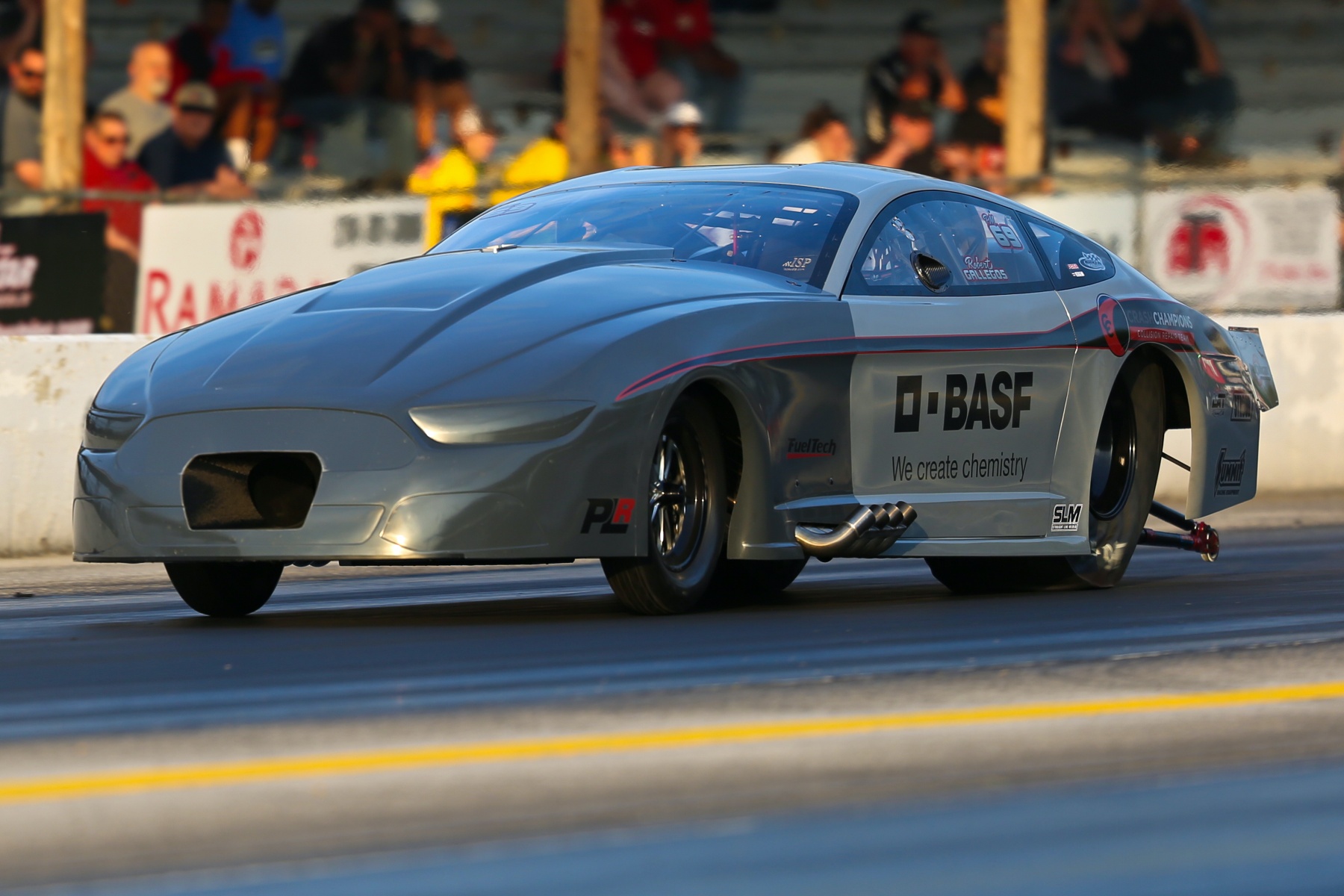 For the first time in his young Pro Mod racing career, Robert Gallegos will race from the No. 1 spot in WS Construction Pro Boost presented by P2 Contracting and Ty-Drive at the Professional Drag Racers Association (PDRA) Vortech Superchargers Doorslammer Derby presented by Stroud Safety. Gallegos made a 3.655-second pass at 205.94 mph Friday night at Beech Bend Raceway Park to jump to the top of the Pro Boost qualifying order.

In just the second PDRA race of his sophomore season in Pro Mod competition, New Mexico’s Robert Gallegos has a car that was quick enough to qualify on top in the ultra-competitive Pro Boost class. After firing off a 3.655 at 205.94 in his ProCharger-boosted BASF ’22 Mustang, Gallegos is hoping he and his Lee White-led team can capitalize on that performance with a late-round finish on Saturday.

“I’ve wanted to do this for a long time,” said Gallegos, who returned from a 30-year drag racing hiatus last season. “This has been a dream: be the No. 1 qualifier and win a race. We haven’t accomplished that yet, but if all the stars align, it’s there. I have to thank Doug Patton and Eric Dillard from Proline, the whole Proline crew, Lee White, Grant O’Rourke, Will, and my wife [Mary]. The car was on kill. After the burnout, I put it in neutral and I was like, ‘They gave me a hot rod.’ I knew it. Here we are. We’ll see how everything goes tomorrow. That’s one hurdle down, now we have the second.”

Record holder Melanie Salemi posted a 3.656 at 204.88 in her Eddie Whelan-owned, roots-blown “Purple Reign’s Side Piece” ’19 Camaro to qualify No. 2, missing what would’ve been a second consecutive No. 1 qualifier award by just one thousandth of a second. Pro Boost sophomore Preston Tanner grabbed the No. 3 spot with his 3.658 at 205.88 in his family’s screw-blown ’15 Corvette. 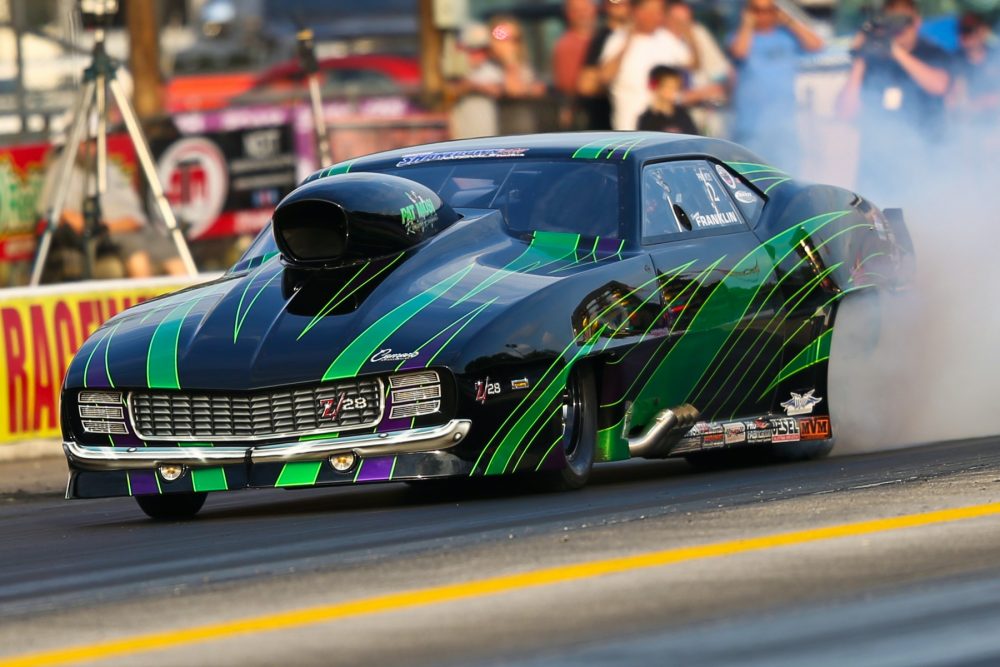 Two-time Pro Nitrous world champion Tommy Franklin had to wait until the sixth and eighth races of the 2021 season to put his Bickel-built, Musi-powered “Jungle Rat” ’69 Camaro in the No. 1 spot. He accelerated that timeline this season, qualifying No. 1 at the second race on tour with a 3.689 at 204.73 in the final qualifying session.

“There’s a lot of tough competition out there with [Jim] Halsey and Jay Cox and [Chris] Rini and [Mike] Achenbach and [Marcus] Butner – I can go down the list,” Franklin said. “It feels like it’s been forever [since last qualifying No. 1]. Pat [Musi] told me last week don’t come back if I don’t have a No. 1 qualifier. We got after it some there and it came around. The car’s been good. We’ve just been working on it. It’s been a slow road back, but it’s really good right now. We’ll keep picking at it and try to get it better so we can turn on some win lights on race day.”

Three-time and defending world champion Jim Halsey, who was the low qualifier going into the final session, qualified second in his Brandon Switzer-tuned, Fulton-powered “Daddy Shark” ’68 Camaro with a 3.717 at 205.79. Pro Nitrous veteran Chris Rini is third with a 3.718 at 202.30 in his Buck-powered ATI Performance Products ’69 Camaro. 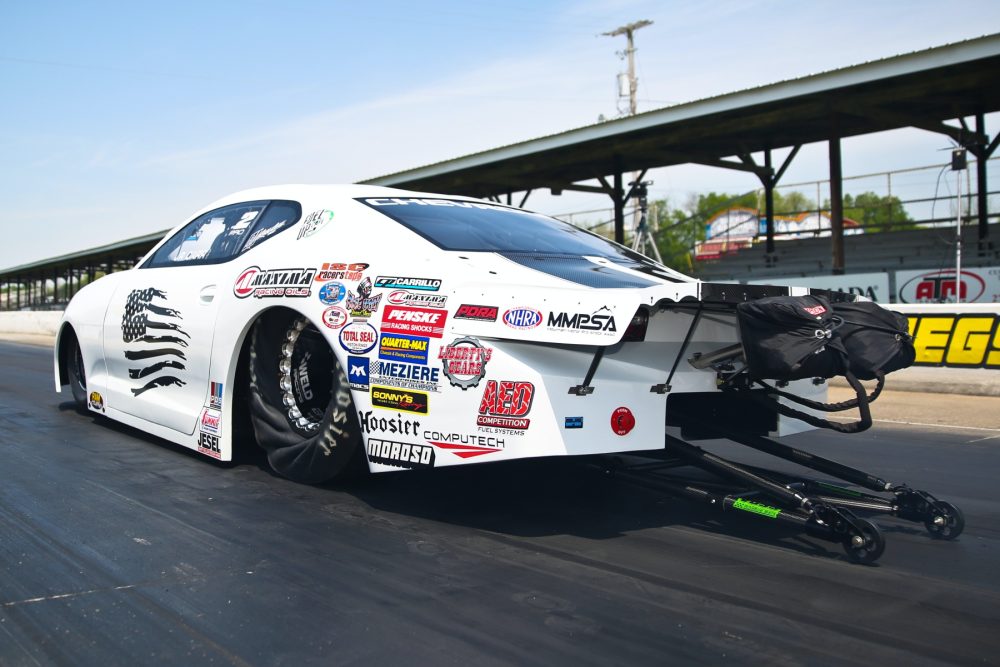 With the exception of the 2021 World Finals, JR Carr has qualified No. 1 in Extreme Pro Stock at every PDRA race going back to the 2020 World Finals. He kept that performance level going at the Doorslammer Derby, using a 4.051 at 179.09 in his Frank Gugliotta-tuned ’20 Camaro to lead a field that saw six other drivers run in the 4.00-second range.

“We struggled in testing and only got one run in, so this is really validating,” said Carr, who thanked supporters like CP Carrillo, Maxima Racing Oils, ISC Racers Tape, and RJ Race Cars. “We had to change quite a bit of stuff [in testing]. We actually had some parts breakage that we found. We had some Pro Mod guys like Ed Burnley come over and help us and some other guys volunteered. It wasn’t easy, but we all came together and the crew did awesome like they always do. Frank turned it up some. It went right down the middle and ran really nice. These guys [in Extreme Pro Stock] are all stepping up and there’s more guys coming. It’s not easy out there. We’re real happy with AED Competition, Liberty’s Gears, and the PDRA safety crew. They really go above and beyond.” 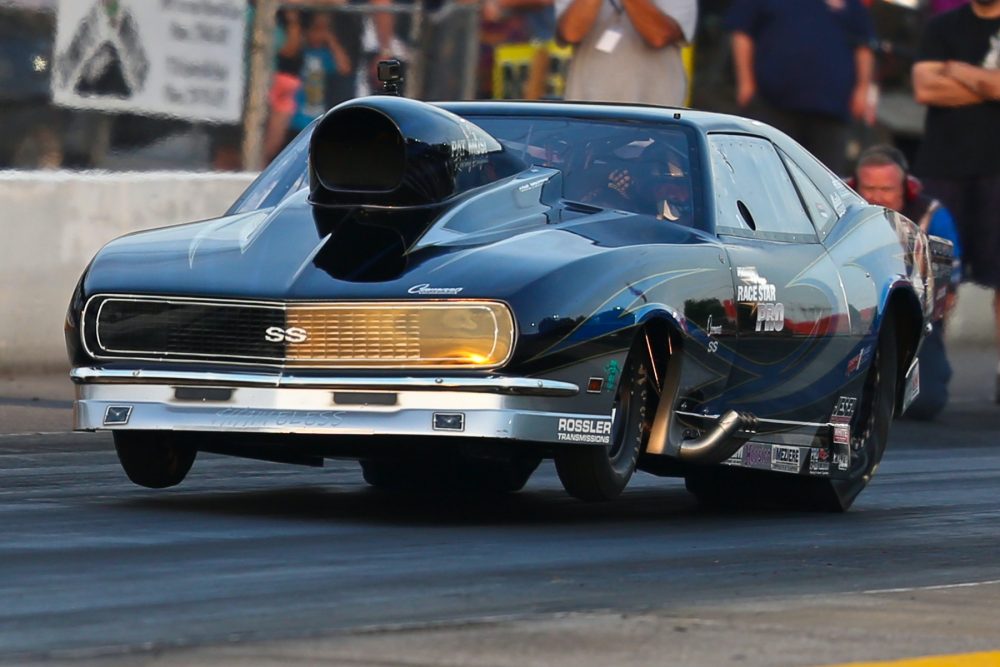 Since joining $hameless Racing for a run at the Pro 632 world championship this season, Walt Lannigan Jr. has had a perfect No. 1 qualifying record as the new driver of the team’s Troy Russell-tuned, Musi-powered ’68 Camaro. This time around, Lannigan knocked down a 4.168, but it was his speed of 171.01 that gave him the No. 1 spot over Amber Franklin.

“We have a crew that works hard and a crew chief that works hard,” said Lannigan, who was tapped to drive for $hameless when two-time and reigning world champion Wes Distefano moved up to Pro Nitrous. “Everybody believes in each other. It’s something I’ve always wanted. I’ve kind of had it, but now it’s surreal that it’s actually happening. Sometimes I have to pinch myself and make sure it’s actually happening. I have to thank Troy, Wes, David and Brenda [Swallow], Shawne [Russell], and the whole $hameless crew. Everybody supports each other and works together. It’s a good feeling.”

Franklin, driving the Musi-powered “OG Jungle Rat” ’69 Camaro formerly campaigned in Pro Nitrous by her father, Tommy, posted a matching 4.168 at 170.90 to follow in second behind Lannigan. Daryl Stewart in his Clayton Murphy-tuned, HRE-powered Chassis Engineering ’17 Camaro rounded out the top 3 with a 4.194 at 169.93.

Alberta, Canada’s Barry Daniluk took his naturally aspirated ’68 Camaro to the provisional No. 1 spot in Top Sportsman 32, with his 4.021 at 182.33 just missing the 16-car Elite field.