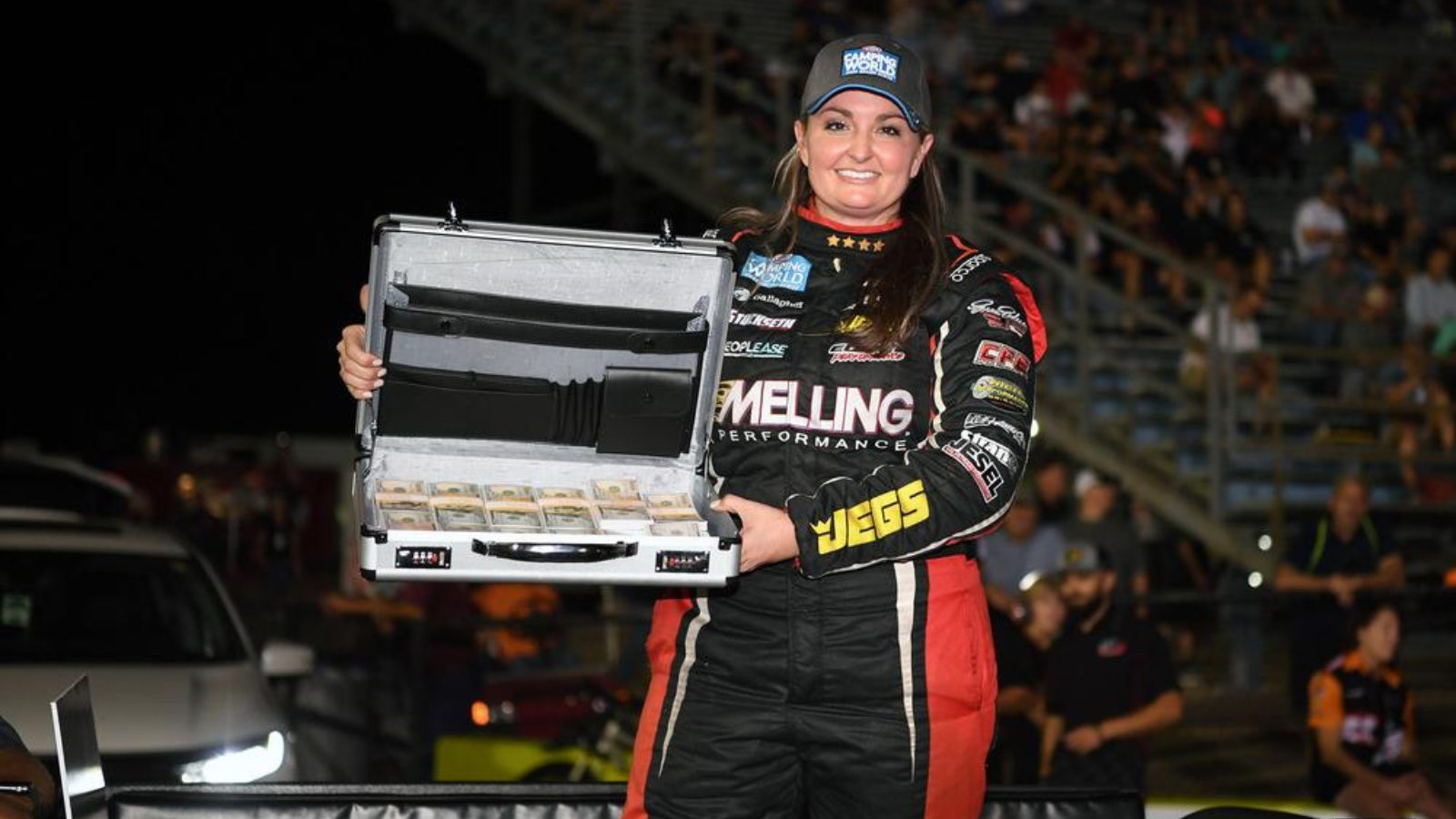 NHRA Camping World Drag Racing Series Pro Stock standout Erica Enders raced to her ninth national event win of the season today at the Texas NHRA FallNationals, completing the famed “Texas Two-Step” by winning this event as well as the event in Houston contested earlier this year. This win marks the 14th victory achieved by the Elite Motorsports team this year.

Facing Greg Anderson in the final round, Enders rocketed her Melling Performance/Elite Motorsports Camaro to the winners circle for the 42nd time in her Pro Stock career.

Enders entered race day from the No. 1 qualifier position for the fifth time this season. The Pro Stock points leader dominated in qualifying as she achieved the lowest elapsed time in each of the four qualifying sessions. It was her blistering pass of 6.524-seconds at 210.53 mph on Friday night that not only set her in the top spot but also won her a $7,500 cash bonus from the Texas Motorplex. 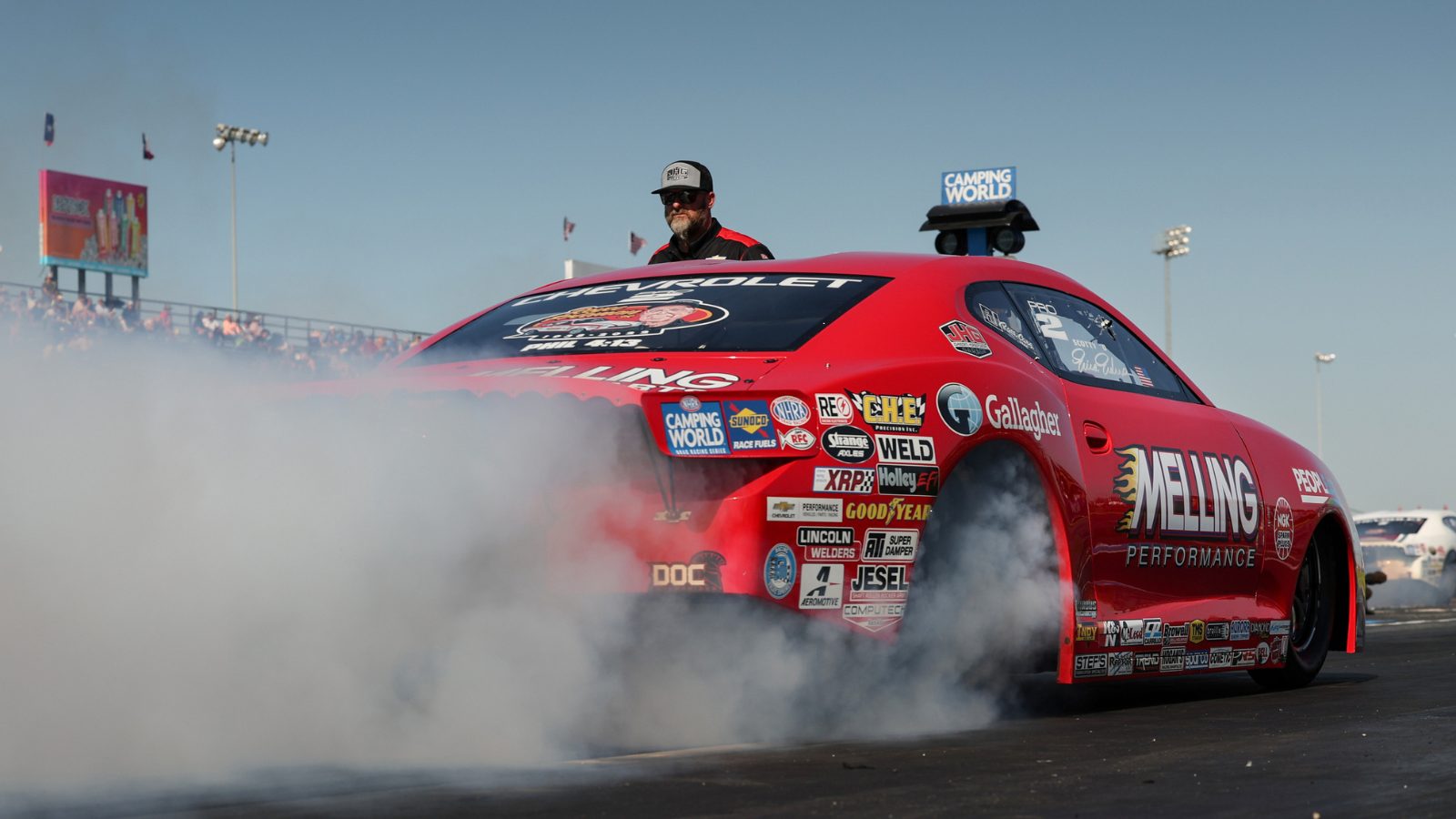 “I’ve got the best crew that stands behind me,” said Enders as she proudly hoisted her hard-earned trophy into the air. “And the good Lord above who keeps me calm. All the glory goes to Him. I was speaking to my sister (Courtney Enders) before this round and she said, ‘If you get this done you’ll have completed the Texas Two-Step for the last time in NHRA history,’ since we won’t be competing in Houston anymore.

“Melling Performance has stuck behind me for a lot of years and they’ve been more than loyal to me when they’ve had options to do something else. So I really want to thank the Melling family as well as Gallagher and Peoplease. This doesn’t happen without those guys. We did it in Texas and I could not be more proud.”

It was a rush to the winners circle at the Texas Motorplex as unpredictable weather patterns threatened to wreak havoc on all of the exciting race day action. Officials worked around the weather to quickly and safely complete the event. Rain showers early in the day impacted the start of competition, but only temporarily. Facing cooler temperatures than they did in qualifying, the Elite Motorsports Pro Stock team made the necessary adjustments to their fleet of high-performance machines.

After qualifying tenth, former Pro Stock world champion Bo Butner faced Deric Kramer in the opening round of Pro Stock eliminations on Sunday. His crimson Johnson’s Horsepowered Garage Camaro looked great speeding down the track but Kramer got to the finish line first. Butner’s Elite Motorsports teammate Fernando Cuadra Sr. also made an early exit in his Corral Boots Camaro when Kyle Koretsky managed to outpace the driver and entrepreneur from Mexico.

Entering race day from the No. 4 qualifying spot, Troy Coughlin Jr. flew down the track against Alan Prusiensky for the round win. He wasn’t alone in overpowering the competition as his teammates Cristian Cuadra and Aaron Stanfield picked up first-round wins against Chris McGaha and Shane Tucker, respectively.

In the final pair of Round One competition, Enders faced Elite teammate Fernando Cuadra Jr. in his Corral Boots Mustang. While Cuadra Jr. got the jump on Enders off of the starting line with an impressive light of .017-seconds, Enders managed to get around him for the win with a pass of 6.539 at 209.79.

After a short rain delay, Pro Stock competition kicked off Round Two with Coughlin in his JEGS.com / Elite Motorsports Camaro taking on and defeating Koretsky. C. Cuadra was uncharacteristically late on the starting line in his Corral Boots Mustang, giving a win to the current Pro Stock world Champion, Greg Anderson. Stanfield faced Deric Kramer in his Janac Brothers/JC3 Energy Camaro. The two talented drivers left the line with identical reaction times of .025-seconds, but Stanfield would emerge victorious with a powerful pass of 6.559 at 209.18. Matt Hartford left the line too early, giving Enders the quarterfinal win.

As gray, ominous-looking clouds threatened to unleash in the Texas sky above, Stanfield and Anderson lined up against each other to kick off the semifinal round. Anderson got the starting line advantage and took it all the way down the track to defeat Stanfield. Elite Motorsports teammates Enders and Coughlin faced off next. Enders raced her powerful Melling Performance/Elite Motorsports Camaro to the stripe first, defeating Coughlin and advancing to the finals where the Texas native then defeated Anderson.

This win created a sizeable lead for the four-time Pro Stock world champion as she seeks to earn her fifth world title. The Countdown to the Championship continues to intensify in every category with upsets and surprises around every corner, but Enders remains steadfast in her mission, making every round count.

There are only two events left in the NHRA Camping World Drag Racing Series 2022 season. The Elite Motorsports team will travel to Las Vegas for the NHRA Nevada Nationals, October 27-30.