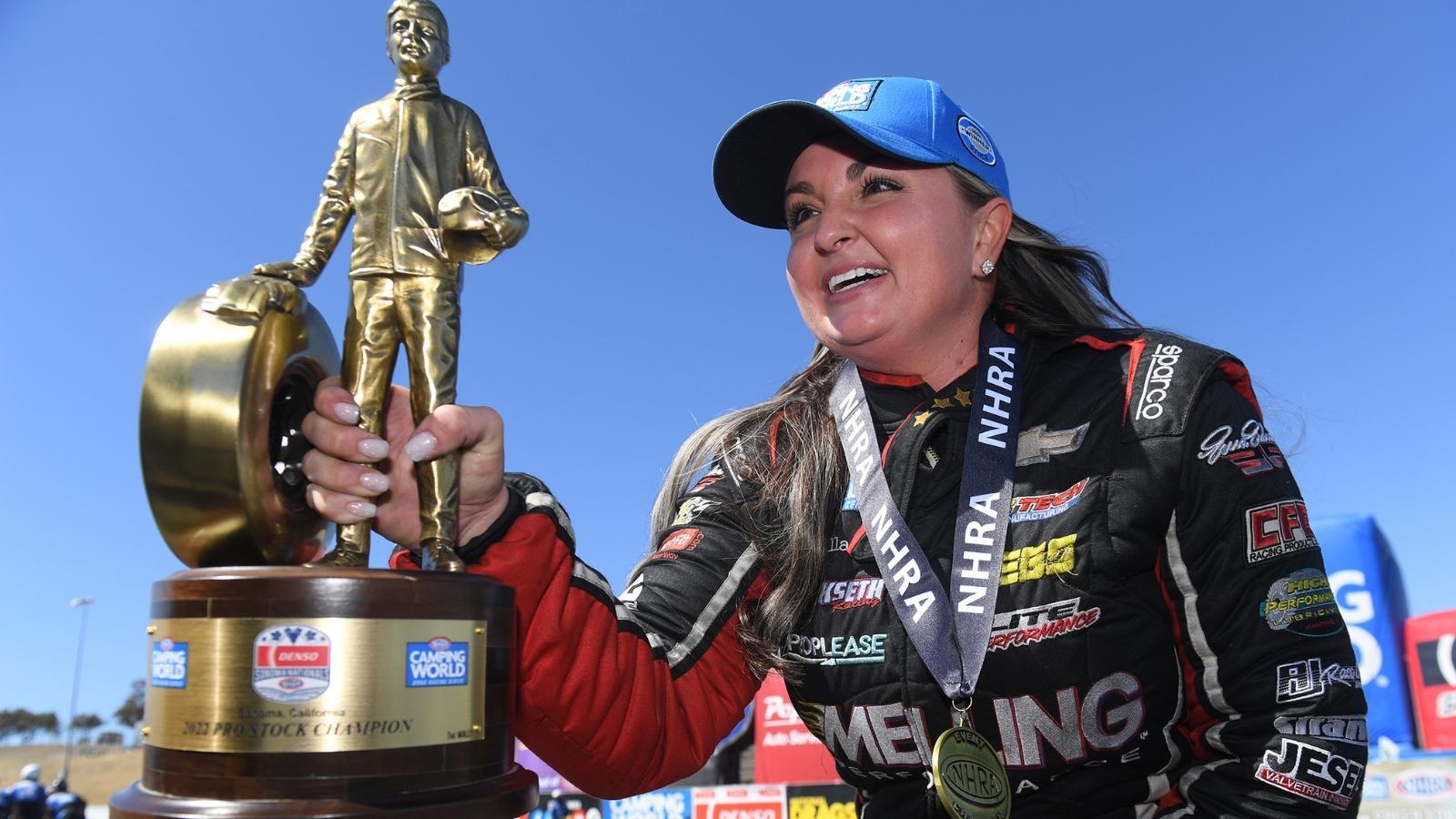 The Elite Motorsports Pro Stock team had a phenomenal showing this weekend at the DENSO NHRA Sonoma Nationals. Pro Stock star Erica Enders not only earned her sixth win of the season but also qualified No. 1 for the third time this year.

Four of Elite’s outstanding drivers qualified in the top half of the NHRA Camping World Drag Racing Series Pro Stock field, including Enders, who parlayed that qualifying position into a victory on race day as she powered her Melling Performance/Elite Motorsports Chevrolet Camaro into the winner’s circle.

This marks the 70th final round of her illustrious career and her 40th national event win (including one sportsman victory). However, despite a career full of event wins and four world championships, Sonoma Raceway has been somewhat elusive for Enders. Before Sunday, the standout Pro Stock driver had never been to the finals at this fan-favorite track.

After winning the semifinals, Enders noted, “We are taking this Melling Performance Camaro to the final round which is something I have never done in Sonoma before. I get to race G.A. (Greg Anderson). You can never count that guy out but I could not be more proud of my team. This is so exciting!”

Starting line advantages paved the way for the Elite Motorsports drivers throughout eliminations. In the first round of competition, Enders faced her Elite Motorsports teammate Fernando Cuadra Jr., who went red, giving Enders her first win of the day. In another all-Elite first-round matchup, Fernando Cuadra Sr. faced Troy Coughlin Jr. Coughlin cut an impressive .038-second light and took that advantage all the way down the track for a first-round win. Aaron Stanfield defeated Deric Kramer thanks to a powerful starting line advantage and a solid run of 6.522-seconds at 210.21 MPH. Meanwhile, Bo Butner got the starting line advantage over Chris McGaha and powered his Johnson’s Horsepowered Garage Chevrolet Camaro to defeat C. McGaha. Rounding out the first round of eliminations with a red light of only -.001, Cristian Cuadra lost to Kyle Koretsky.

In the second round of the day, Enders defeated Mason McGaha thanks to gaining the starting line advantage and laying down a pass of 6.540 at 211.43. Stanfield beat former Rookie Of The Year Dallas Glenn to move into the semifinals, where he would face Enders. On the other side of the ladder, Koretsky got the better of Coughlin despite identical reaction times; and Greg Anderson defeated Butner.

Stanfield rolled through the beam in the semifinals, giving Enders the win to propel her into the final round against current world champion Anderson. Her pass of 6.527 at 211.00 gave her lane choice over Anderson.

All hands were on deck in the Elite Motorsports pit area as Enders prepared to face Anderson. The crew came together with lightning speed and precision in order to make it to the staging lanes on time. Coming into the finals, Anderson and Enders both had 23 round wins against each other, amplifying the intensity on the track as they rolled into the beams.

With a .018 reaction time, Enders got the starting line advantage once again and held on for a holeshot win against Pro Stock veteran Anderson, even after she lost the engine near the finish line. 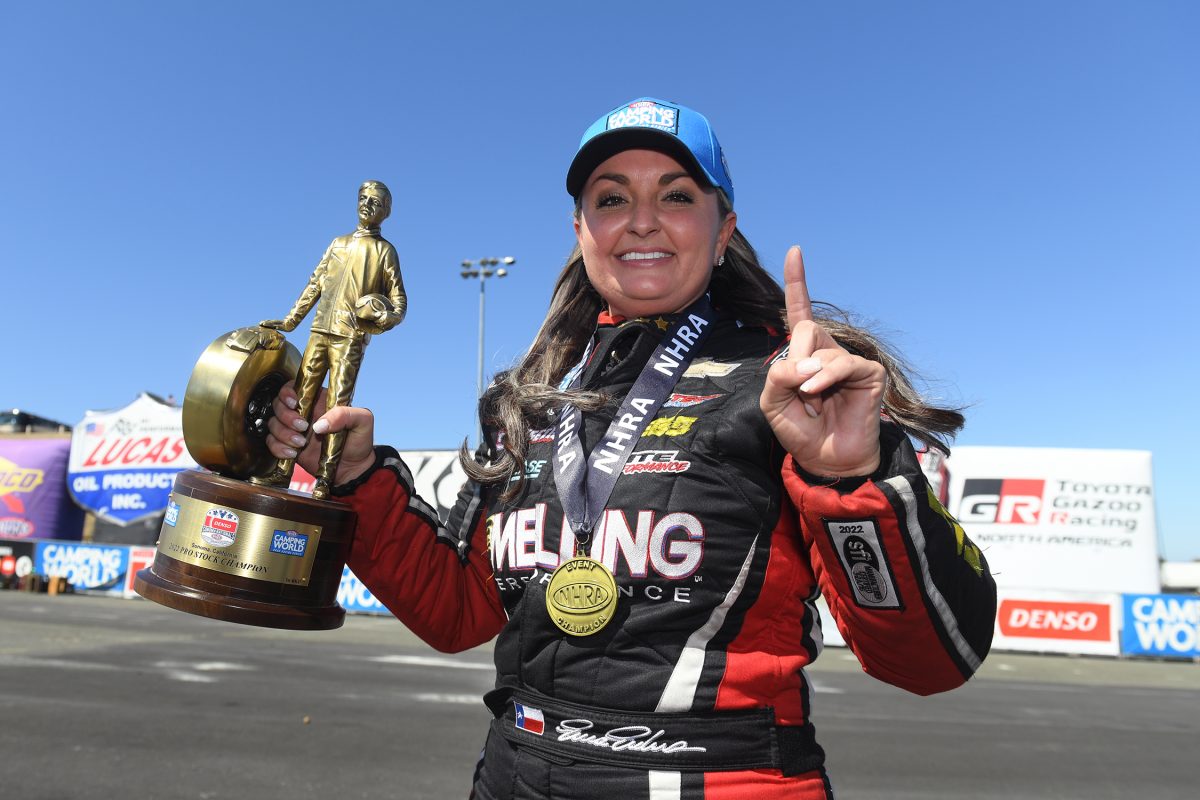 “Any time you can hold one of these awesome Wallys in your hand it’s a good day,” said Enders. “My guys really rallied. We had to change a bunch of stuff in the pit. G.A. was waiting for me. It was kind of one of those rushed finals. Then we were about 150 feet shy of the finish line and my engine let go. Thank God we got it done for Melling Performance. I have never won here in Sonoma in 18 years of Pro Stock. This win means a whole lot to me. We’ve been talking about that wine goblet all weekend!”

This is the first win for the Elite Motorsports team since losing patriarch Royce Freeman Sr. less than two weeks ago. In an emotional interview minutes after the win, Richard Freeman simply said, “This is for my old man. Love you, Pops.”

In the NHRA Lucas Oil Drag Racing Series, Elite driver David Cuadra powered his Top Sportsman Cobalt to two round wins, first defeating Mike Federer followed by Robert Strohm, before going out in the third round against Gerald Bucklin.