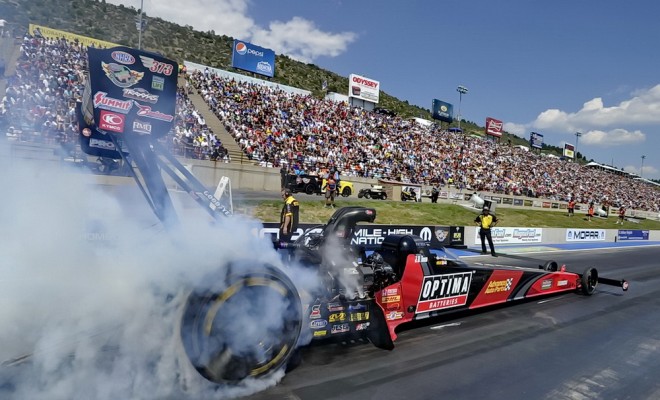 Is it just me or have the NHRA broadcasts on ESPN and ESPN2 been getting much better lately? At the risk of drawing the perpetual NHRA naysayers’ ire, I think the last few televised races have delivered better pacing, more relevant and in-depth feature reporting and even less focus on endless nitro burnouts with more on actual racing. I like it.

Despite what turned out to be a four-hour broadcast on the primary ESPN channel, this past weekend’s live broadcast from Denver held my attention pretty much from start to finish (I confess to flicking back-and-forth between NHRA and a rainy IndyCar race in Toronto.) Unfortunately, the NHRA and ESPN ran into the old problem of fighting the clock when going live, but ironically this time it seemed like the preliminary rounds finished a little too early and they were left scrambling to fill the air before the finals with excessive recaps of each class. To their credit, though, it didn’t turn into the John Force Show—at least no more than rightfully deserved since JFR had three cars competing in the finals—and several of the “lesser” teams got a little screen time. 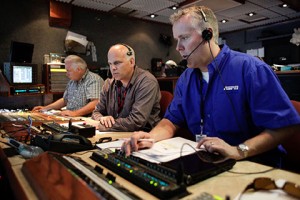 But then, to compound the time issue a brief rain shower moved across Bandimere Speedway just before the finals, forcing a half-hour extension to the broadcast. Fortunately no big-time, mainstream event was following on the network, so NHRA didn’t get bumped, and thank God because I don’t even want to imagine the shrieks of protest and condemnation that would’ve followed.

Obviously someone in the production truck is calling the shots, but I think a lot of the credit for the improved product has to go to the on-air talent, starting with Dave Rieff in the anchor chair. After several seasons as a pit reporter on the NHRA race-day show, Rieff brings with him much more insider knowledge, familiarity with the competitors and just a better general understanding of the sport than either of his most recent predecessors. I also like how Rieff brings a good balance of enthusiasm and reasoned observation to his play-by-play call, as opposed to flying off the handle at any little hiccup on the track. 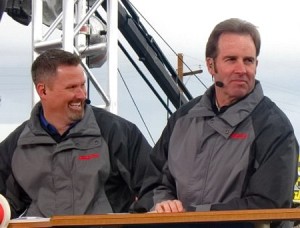 Alongside Rieff is longtime analyst Mike Dunn, who does an admirable job in what’s not an easy role to fill given the repetitive nature of the sport. These guys worked well together from the start last season, but this year seem to have really got in synch, including making better, more relevant use of “stats guy” Lewis Bloom, who though he rarely appears on camera can be counted on to deliver some savory statistical tidbits during each broadcast.

And Gary Gerould in the pits and on the top end is a journalistic treasure that I’m not sure many NHRA fans fully appreciate just how fortunate they are to have. Simply put, as far as reporting on motorsports goes this is one of the guys that “been there, done that” was written about. Finally, though I don’t really know much about Jamie Howe, other than she comes from a sports car background, after a couple of years in the NHRA pits she seems comfortable and more than capable of conducting quick but informative interviews. 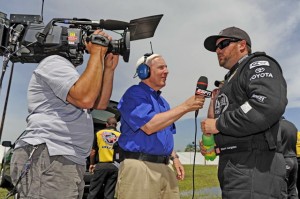 All told, I think this is the strongest line-up for NHRA TV that we’ve seen since the days of Steve Evans and Dave McClelland—and that’s saying something.

All this is good stuff because the sport needs a decent TV package if it’s to survive. While it’s true there’s no substitute for first-hand experience of the sensory overload that is professional drag racing, the fact is more people witness NHRA competition during one broadcast than will attend the next dozen or so races in person. There’s a lot of talk these days about dwindling corporate support of all kinds of racing, but without a viable TV package to reach the masses, you can consider the NHRA and its teams doomed.

Bottom line, the NHRA TV product is getting better, much better, so if you like it keep watching, and if you haven’t watched in a while it’s time to take another look.