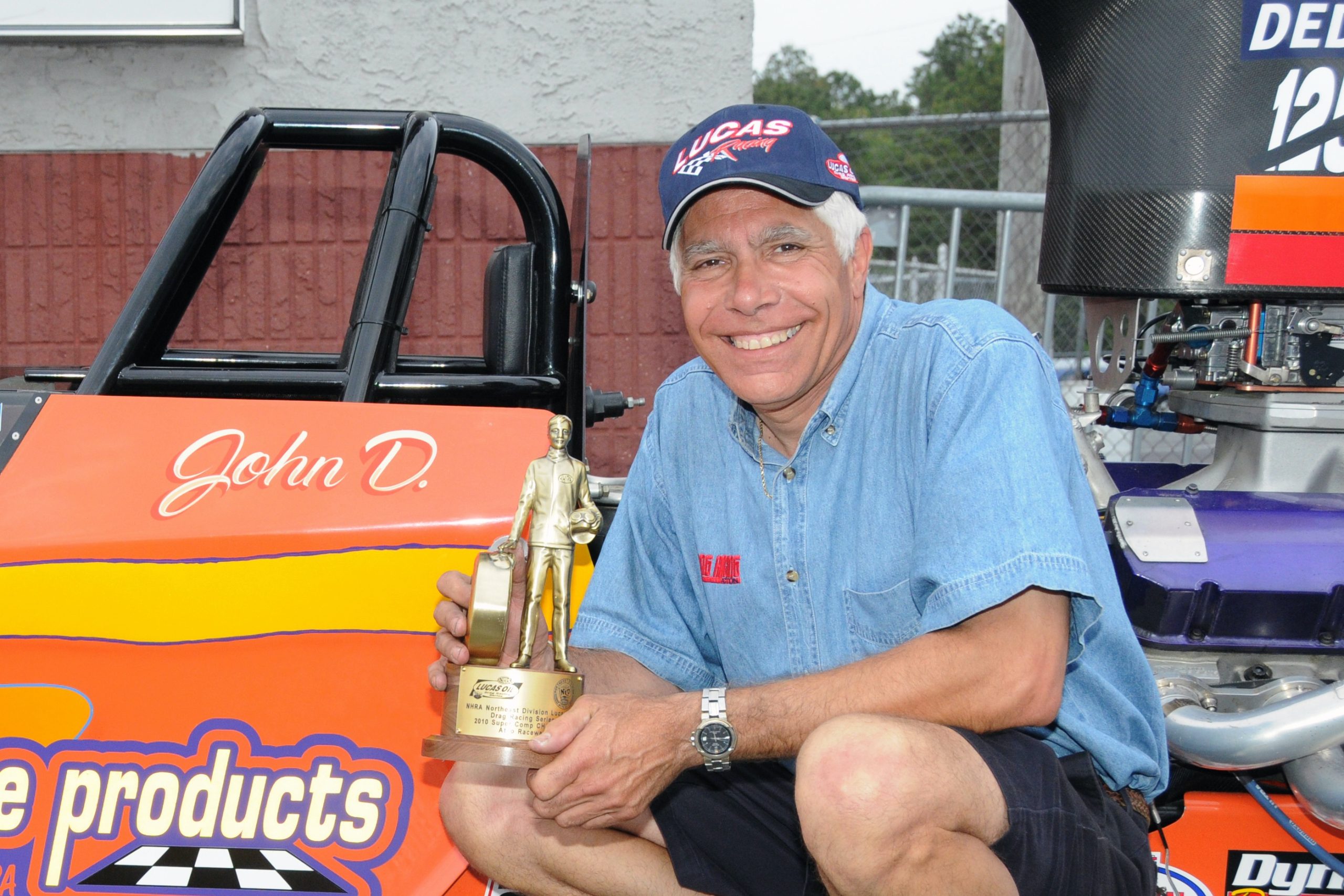 John DiBartolomeo, a longtime sportsman racer, journalist, and manufacturer, passed away Sunday, May 22, following a cancer battle. He touched many through his work at Drag Racing Action and numerous other publications. He won multiple NHRA national and divisional events and ran a successful business, DRC Race Products. Jon Asher, his former editor and longtime colleague, pays tribute to “John D” in the story below.

When we’re kids, the idea of death is often a far-off concept we give little thought to, but as the years pass, and life becomes ever more precious as we’re surrounded by family and friends, our realities change. As much as we might try to deny it, we know that everyone’s days are numbered, so we strive to make each one of those days more meaningful, more fulfilling. That was my friend – no, our friend, John DiBartolomeo.

Born July 21, 1953, John was a “Joisey” boy through his formative years and remained a Jerseyite through the early years of his marriage to the former Dottie Hadrava. For the last 19 years, John, Dottie and their children, Franklin and Christina, lived in Beaver Springs, Pennsylvania, literally a stone’s throw from the dragstrip that originally bore the town’s name. Franklin and his wife, Jenny, and son, Evan, now reside in Huntersville, North Carolina.

John D, for that was the name he was known by among his hundreds of friends, was a multi-faceted individual possessing an astonishing number of highly polished skills. He could take a solid block of aluminum and form it into a practical piece of racing hardware in the morning so it could be added to the constantly growing list of products marketed under the DRC Race Products banner, and still have time for more.

He had choices. He could sit down at his computer and compose an easily understood yet highly technical article for one of the numerous enthusiast publications that prized his contributions, or he might roll up his sleeves and start working on one of the race cars that crowded his shop. But whatever task he decided to take on there were the interruptions he couldn’t avoid – the more or less constant dings announcing the arrival of yet another email, the texts overflowing his phone and, of course, the non-stop ringing of his phone.

Everyone wanted a piece of John DiBartolomeo, from customers to fellow journalists to racers and racing officials, and the reasons were obvious to all of us who knew and loved him – he was there for us. As cliched as that might sound, John could easily switch from being an aftermarket manufacturer advising a potential customer about a product to a writer helping someone else compose a story. If that wasn’t enough he’d still have time to discuss proposed rules changes with another Sportsman racer, and when that racing official called, John was always ready with succinct suggestions that probably should have been adopted wholesale.

If ever there was a misnomer it’s calling a successful drag racer like John D a “Sportsman.” It is, in some respects, somewhat dismissive, for anyone who follows the endeavor knows that winning a points race, much less an NHRA national event, takes more work, diligence and effort than anyone sitting in the grandstands can ever truly understand. John D won seven of those national events, a record this writer can’t fully fathom. Ironically, most of the races John won came on rainout Mondays, when the grandstands were empty and the media had long since disappeared. I’d tease John, saying I knew he was fabricating his victory story because no one had actually seen it happen. Then he’d email me a photo of he and Dottie holding the trophy.

John and I worked together at Drag Racing Action Magazine, with me being the editor and John being the all-important tech writer. Without his contributions the magazine wouldn’t have been as good as his contributions made it. His connections with the aftermarket industry meant that we had the latest information on the hottest new stuff. Of course, John had to explain everything to me because my technical expertise was limited to being usually able to distinguish a race car from a school bus.

Then there was The Conversation that every drag racer has had, continues to have, and will continue to have long into the future. The Conversation. That’s when two or more individuals start offering their personal plans for the salvation of drag racing. Even after John began his battle against cancer in late 2021, our phone calls would begin with an update on his condition and inevitably devolve into something else. More than once he’d interrupt to say, “Wait. Are we having The Conversation?”  Not surprisingly, however, each and every time we talked John would bring up his family, everything from how things were going with Dottie’s job, Franklin’s new child and even Christina’s televised cornhole competitions. Family meant everything to John.

When John replaced me as editor of the magazine, he later told me that he thought it would change our relationship in a negative way. It actually accomplished the opposite. When I was still covering the races, John was the first person I sought out at the track because our conversations were always informative, educational and, most of all, pure fun. I will be but one of hundreds who will miss John in the coming days and years. All of us are better off for having known him.

Details regarding a memorial service for John in Pennsylvania will be announced shortly.