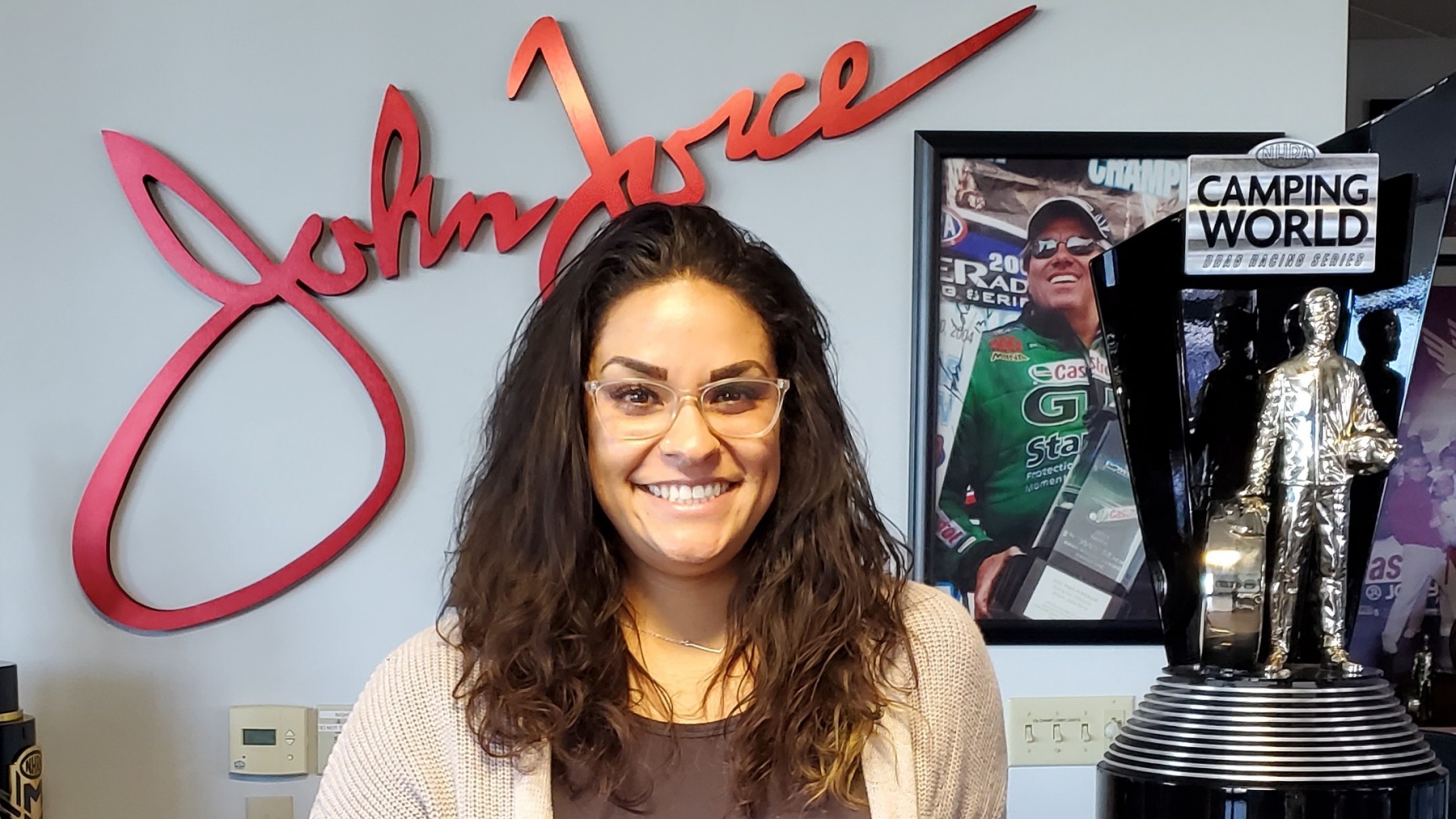 Sara Slaughter didn’t grow up around drag racing and admittedly wasn’t well-versed in the sport before getting involved in 2016. But with undeniable work ethic and determination, her skills have made Slaughter a perfect fit for it. She’s now the Public Relations Director for John Force Racing, carving out an impressive spot in the frenetic world of NHRA drag racing.

She joins current JFR Top Fuel drivers Brittany Force and Austin Prock – as well as former Funny Car star Courtney Force – as Drag Illustrated 30 Under 30 members, becoming a force in her own right in the racing public relations world.

[Editor’s Note: This story originally appeared in DI #179, the 30 Under 30 Issue, in Nov/Dec of 2022.]
“The way I look at it, I want to make sure the drivers always look their best, whether it’s on television, in a newspaper article, a photo, hero cards or whatever it might be,” Slaughter says. “PR is really my passion and I feel like that’s my bread and butter. To be on this list, other people have seen the hard work I’ve put in and I appreciate it. Not everybody makes this list, so to be on it makes me really happy.”

With Slaughter’s help, JFR continues to reign supreme when it comes to popularity in the sport. She came on board with the organization in December of 2017 after a two-year stint as a media relations manager in NHRA. Before that, Slaughter’s knowledge of the sport was limited, but she had proven to be a strong writer (working at the Press-Enterprise during and after graduating from UC-Riverside) and problem solver.

It suited her well and she’s thrived in the drag racing world, finding creative solutions to spread the word about her drivers. That comes from knowing her drivers well, not taking no for an answer when it comes to her pitches, and following through on ideas until they come to life.

“I spend so much time with the team and the drivers, I’ve been able to learn their personalities and what fits them. I know who can do a morning show, or who can do something else,” Slaughter shares. “Building relationships and being observant is important, and all of the drivers have their own strong, distinct personalities.

“I’m passionate about getting the job done,” she continues, “but also making sure they get good exposure, they look good doing it, and are properly prepared ahead of time. All of that is really important to me.”

Throughout her time at JFR, Slaughter’s skills have stretch into other areas as well, including social media and general team support/management, adding to her well-rounded array of skills.

Along the way, she’s found a strong passion for drag racing and spreading the word about the sports and its talented drivers.

“What I love about it is definitely the people and the teams,” Slaughter says. “It’s definitely competitive and everyone is out there to win, but it’s also a family out here. Everyone is down to earth and they know how important the fans are, and they understand promoting themselves is also promoting the sport.”