Racing is all the Quartuccio sisters know. There was never a “before-racing” period of time that Kelsey and Kaitlin remember. Their earliest memories are those of being at the track, in the grandstands with their mom and watching their talented drag racer of a dad and Drag Illustrated‘s 2021 Outlaw Racer of the Year, Ken, break records and win races.

It only made sense for Kelsey, 28, and Kaitlin, 23, to get involved in motorsports because of their upbringing. From drag racing to dirt bikes and even road racing, the Quartuccio sisters were exposed to many forms of motorsports. However, each sister blazed their own path in the industry.

Kaitlin followed closely in her father’s footsteps – just like she did as a child. “When I was born, it was just a given that we were going to be raised at the racetrack,” Kaitlin explains. “Wherever [Dad] was, I wanted to be.” She followed her dad even through high school because Kaitlin’s want to be with her parents and around racing outweighed the typical high school routine.

Then after Kaitlin turned 16, Ken let her get in a race car. “I knew my entire life that I wanted to be like my dad. I always thought my dad was the coolest person in the world,” she explains. “I waited till I was about 16, and then I asked my dad; I said, ‘If I work hard enough for you, can I try driving?’”

After trying out a few different cars, including her dad’s Outlaw 632 ’69 Camaro, Kaitlin purchased a ’63 Nova close to home that she, her dad and a group of close friends turned into a race car. However, things went differently than planned when she finally got behind the wheel.

“We got an LSX454R, and the first time I drove it, I blew it up,” Kaitlin says. “Then we had to re-figure everything and what I was going to do. Then we found a new motor, and I raced in three different classes. I’m still trying to figure out where I belong, but as soon as PDRA came out with something that I could fit in, I knew that I had to be part of PDRA.” 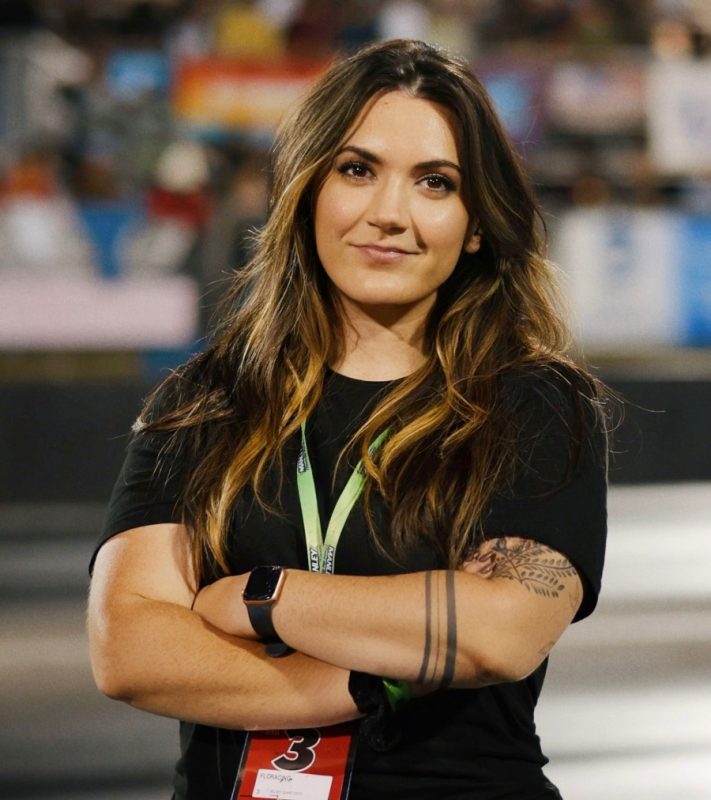 Kelsey, on the other hand, chose a different path. She went to college and graduated with a communications and marketing degree and knew she wanted to be in motorsports. Kelsey first got her start working in the luxury car scene. However, she felt the tug to get back to her drag racing roots.

“I know the drag racing community. I know the scene, and I know the industry very well,” Kelsey thought to herself while reevaluating her career. “It makes the most sense for me to apply what I know technically into a space that I really just adore.”

Now, Kelsey is a senior digital marketing specialist at FloRacing, joining the company at the beginning of 2022. “It’s super important to me to look at roles or jobs in my life where I know I can make an impact that is fulfilling to me,” she says. “I knew there was a space where I could make an impact.”

Drag racing as a participant might not be in Kelsey’s future, but that doesn’t mean she hasn’t thought about getting behind the wheel. “I don’t think I would ever do what my sister and my father do, but I definitely have an interest in doing the Drag-n-Drive stuff,” she says.

She’ll leave the racing up to Kaitlin and her ventures into Super Street with the PDRA. However, Kelsey does enjoy going to the track, whether it’s for work or to watch her dad or sister race. Kaitlin, on the contrary, says, “I’m definitely prioritizing PDRA next year.” She feels like she’s found a home after her trying racing career.

Another initiative that Kaitlin is passionate about is bringing awareness and supporting drivers in motorsports that suffer from anxiety and getting back into a car after a crash.

“The first time I drove a race car at a racetrack, I ended up crashing, and I was horrified,” Kaitlin says, because she felt like she let everyone around her down. “I was horrified to get back in a car because crashing a race car is really scary.”

When she felt ready to get back into the car, Kaitlin felt a sense of freedom from fear and anxiety driving down the track. Her experience led her and her mother, Denise, to create “Freedom From Fear Racing” with encouragement from her family.

“The goal is to encourage men, women, and kids in all types of racing to face their fears and not let anxiety stop them from doing what they love. To get back up when you fall, to keep going when you feel like you can’t,” Kaitlin confesses. “I’ve crashed race cars and dirt bikes and felt too scared to do it again, but I knew how much I loved the freedom driving gives me, so I keep chasing the feeling.”