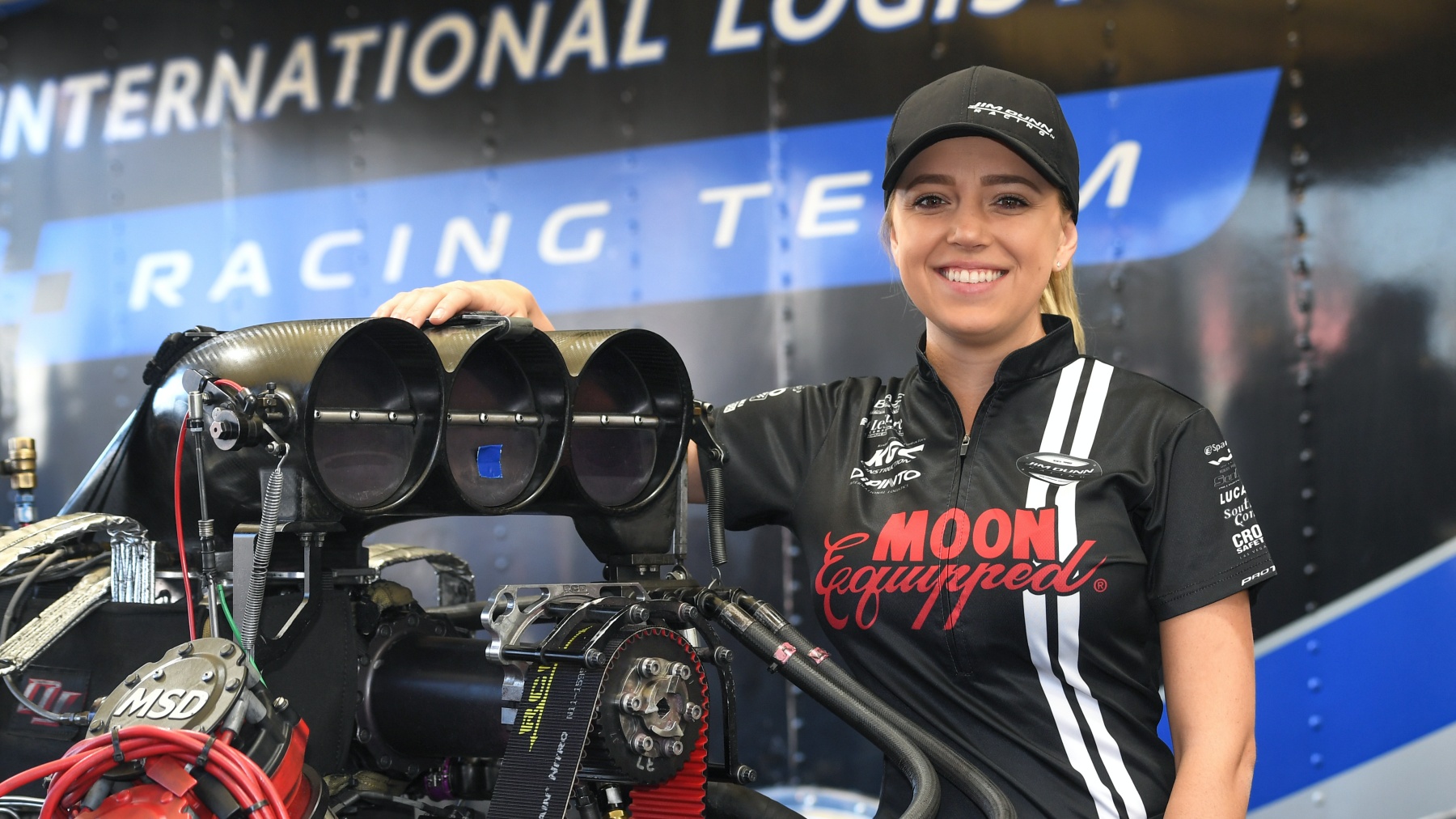 At a young age, Johnna Dunn started wiping out oil pans and grabbing tools for the crew on the Jim Dunn Racing Funny Car entry. It made sense that she would be a track kid – Johnna is the granddaughter of one of the most well-known nitro racers in NHRA history.

“My papa, ‘Big’ Jim Dunn, has been racing for over 60 years,” says the now 25-year-old Southern California native, referring to her grandfather and the subject of the legendary drag racing documentary, Funny Car Summer. “Racing is a family affair for us, so I didn’t really have a choice. I was attending events before I could walk, and I’m blessed to have grown up at the racetrack sharing the same passion alongside my papa and father.”

Johnna’s father, Jon, is the team manager, and he began bringing his daughter to every national event while she was in high school. After Johnna graduated, she took on the public relations role for the Jim Dunn Racing team. For the last two seasons, she’s also worked alongside her father as clutch assistant.

“Although there are young women involved in the sport, it’s still shocking to the fans when they see a young lady working hard and getting her hands dirty,” she says. “Often times, when a woman is seen in the motorsports world, it’s as a promo model or spokesperson. I enjoy working hard with my team, and it’s extra rewarding when the young female fans look up to me and want a photo with me. It’s [also] a true accomplishment to be respected by some of the best mechanics.”

Racing isn’t her whole life, though. The youngest Dunn is also a full-time student and part-time employee at St. Jude Medical Center in the Emergency department. Between the race shop, the racetrack, school, and work, there isn’t time for much else – but that doesn’t mean she doesn’t think about what more her life will include in the future.

“The number one question I get asked is when I’m going to drive the Funny Car,” she says. “I would love to hop in the seat and drive for my papa; that is the ultimate goal. My plan has been to learn as much as I can, mechanically, about the car. I believe that will make you a better driver, and it’s important to me to understand the car before making any passes in it. These cars are monsters: 330 mph in less than four seconds is insane. My family has been talking about me licensing soon, so we’ll see.

“The thing I’m most proud of is my family and the accomplishments made,” she continues. “My papa is my hero. He’s turning 89 in a few months, attends every event, still builds all the motors himself at the race shop, tunes the Funny Car, and has a consistent car running in the 3.90s.

“Even on our off weekends you can find us at the racetrack whether it be Irwindale, Bakersfield, or Fontana. The Dunn family eats, sleeps, and breathes racing. My father finds all of our sponsorship, designs the cars, and is our team manager. My grandmother, Diane Dunn, mixes the fuel for the Funny Car. To see the hard work and passion poured into this race team day in and day out gives me more motivation to make my mark in the racing world.”