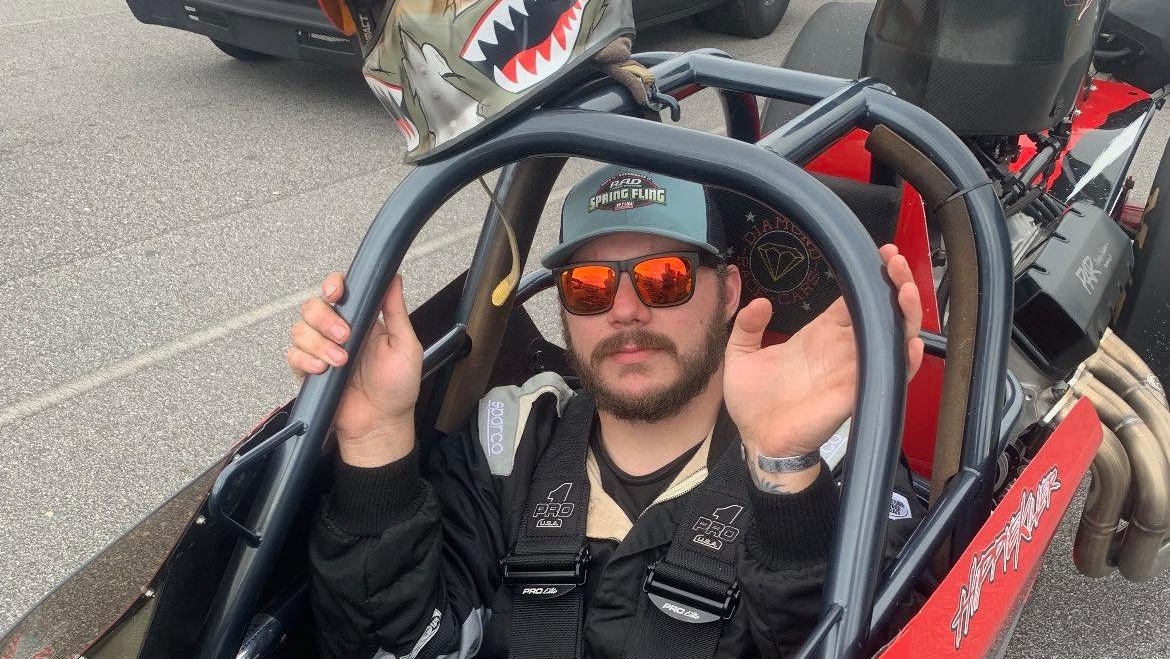 Jaymes Rawlings was first introduced to drag racing through his dad, James. Rawlings’ father would take him to U.S. 36 Raceway in Osborn, Missouri, where he remembers watching the Ozark Mountain Super Shifters make passes down the track.

At 12 years old, Rawlings and his father started building a ’72 Chevy Vega so that when he turned 16, he could start drag racing. Rawlings did race, but he also felt the calling from another force. Rawlings’ stepfather, Joel Mitchell, was a U.S. Army Special Forces Green Beret, and he took a particular interest in the field. “That was kind of my role model for that,” Rawlings says.

He ended up joining the Army when he was 17 and was deployed at 18. Rawlings spent 11 years in the military, including several deployments in Afghanistan as an Airborne Infantryman. However, combat-related injuries brought Rawlings home and ended his active status. But during his time in the Army, Rawlings found himself returning to his first passion – drag racing, and it’s his drag racing roots that Rawlings found his place today.

After a horrific crash in his childhood race car at Nahunta Dragway, he built a ’98 Trans Am with his dad, winning several footbrake races, including a 2019 championship. But once again, Rawlings found himself faced with adversity. At the Bracket Finals that same year, a track employee crashed into Rawlings’ Trans Am. He thought he was out of the event, but two fellow racers offered Rawlings their help.

“Jason Rollins and Derek Putnam immediately came to me and said, ‘Hey, we have a car at the shop – it’s a 740 Trans Am. We’ll go get it right now, and you’re more than happy to race it,’” Rawlings explains. “It was because of guys like that, that I had an opportunity to race. They didn’t know me from anything but did that for me.” Rawlings secured a semifinal finish in Rollins’ car and gained a new racing family.

After the accident, he decided to jump in a dragster and won a local Top Dragster race. Then, Rawlings’ sold the car for his ’63 Corvette roadster. “The roadster was kind of the best of both worlds, so I could have that chassis car for the big-money stuff and run with door cars and then have something that was legal to foot brake,” he says.

Additionally, Rawlings is making a career out of his love for cars and the ability to work with his hands. “When I was getting out [of the Army], I knew I was going to have a hard time transitioning to the civilian world,” Rawlings explains. He was once again inspired by his dad’s ability to build race cars and started a welding business this year, Hippie Fabrication. The name is an ode to his Army callsign.

“The only reason I ever started doing dragster headers was for the simple fact that I didn’t think there was any possible way I could stay busy doing custom door car stuff,” he says. Now, Rawlings’ schedule is booked, and he’s closing in on 50 sets of headers.

“Because of PTSD and anxiety and everything else that a lot of guys suffer from, it’s helped me with the transition because I get to work by myself, I get to meet new people, and for me, it’s a coping mechanism,” Rawlings explains. “I’d like to thank God because he’s blessed me with the opportunity to have a somewhat healthy body still and continue what I’m doing. Then definitely my father. Without him, I wouldn’t be involved in racing. I never would’ve had those early skills from watching him in the shop. I’ve learned everything from him.”