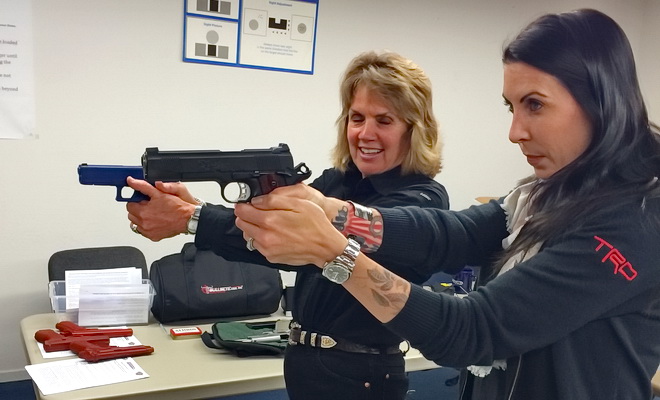 NHRA Funny Car driver Alexis DeJoria (above right) has always seen herself as a bit of a “wild child.” In fact, not only does DeJoria pilot a nitro-powered Funny Car at well over 300 mph, she also lists snowboarding, riding dirt bikes and skydiving among her hobbies.

DeJoria also enjoys spending time at the shooting range with her husband, Jesse James, the owner of West Coast Choppers and designer of his own line of firearms. The Southern California native had a chance to show off some of her skills on Wednesday at the Bullseye Indoor Shooting Range in San Rafael. The event was held in advance of the NHRA Sonoma Nationals at Sonoma Raceway, July 25-27. 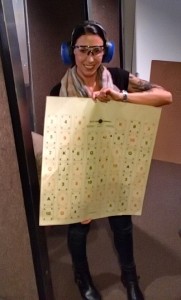 “This is the first time I’ve done something like this, going head to head against another person. We should do things like this more often. I had a lot of fun, ” said DeJoria.

DeJoria joined Bullseye instructor Lynne V. on the 10-lane, 18-yard shooting range to practice a variety of skills challenges, including taking shots from five-, seven-, and 18-meters away. The event was closed by playing a hand of seven-card stud poker, “Bullseye style.” Each shooter was allowed seven shots on a target displaying each card in a 52-card deck. Lynne shot first nabbing a pair of queens, while DeJoria rallied back for a full house.

“This was fun. I don’t compete professionally, I just like introducing people to shoot, it’s great watching people get more comfortable,” said the instructor whose expertise includes long-range rifle marksmanship, as well as basic pistol and shotgun instruction. “Driving as fast as she does is daring. For me, this isn’t daring. This is a sport. “

DeJoria is enjoying a break-through season in the NHRA Mello Yello Drag Racing Series, posting two victories (Phoenix and Las Vegas) and one runner-up finish so far this season. She also became the first female driver in Funny Car history to record a sub-four second pass earlier this year (3.997 seconds). 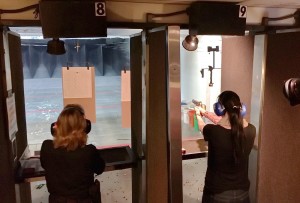 “Sonoma is a great track. It’s a really fast track and we break records there,” said DeJoria. “I’m really looking forward to getting there next week.”

The daughter of highly-successful businessman John Paul DeJoria, the owner of Paul Mitchell Hair Care Products and Patron Tequila, DeJoria worked her way up through the NHRA ranks, progressing from Super Gas to Super Comp and Top Alcohol Funny Car, where she competed for five seasons, before making the move to Funny Car in 2011.

DeJoria returns to the cockpit of her Patron XO Café Toyota Funny Car this weekend for the grueling West Coast Swing, which includes consecutive stops in Denver, Sonoma and Seattle.