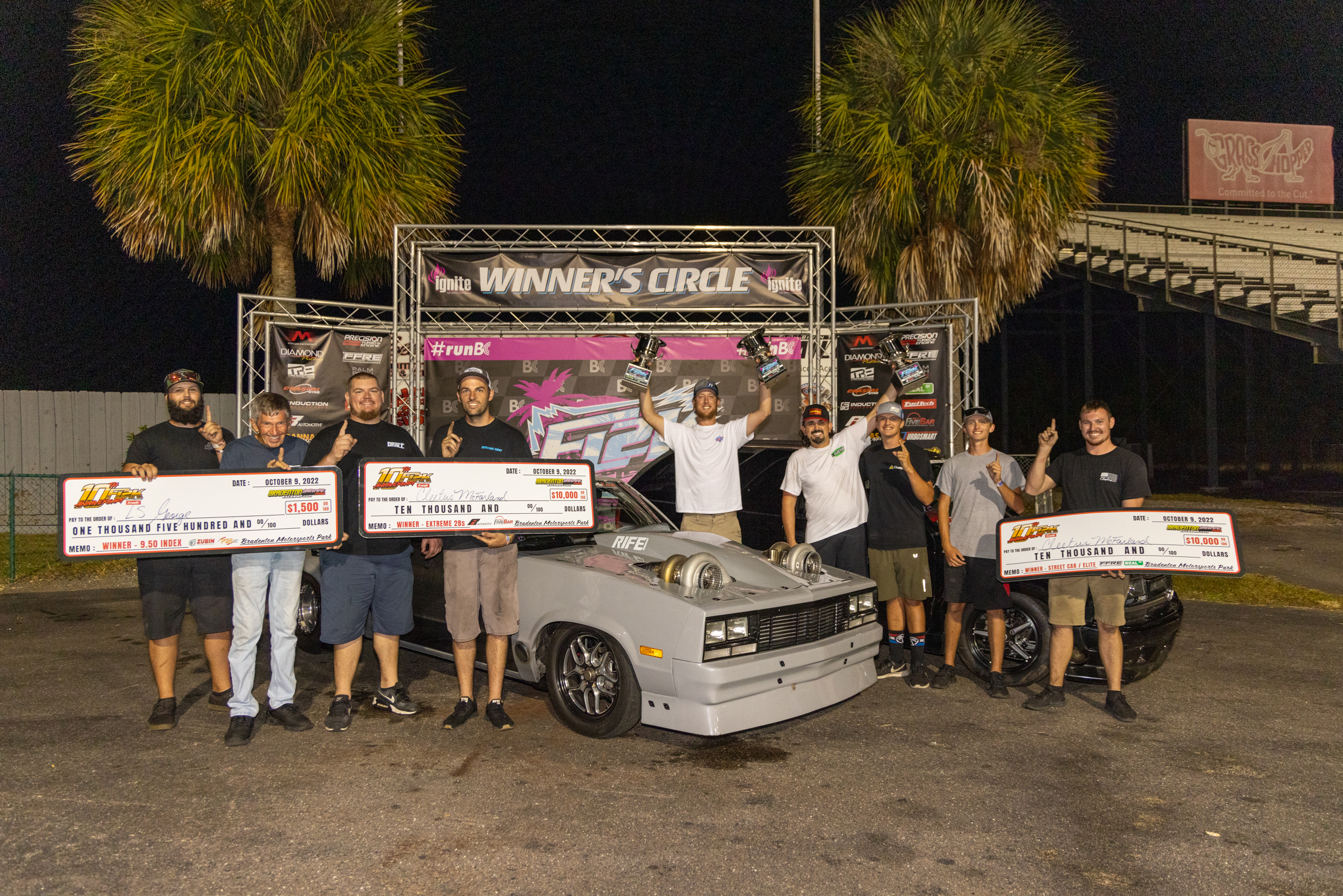 Two drag-and-drive stars, Garrett “Cleetus McFarland” Mitchell and Rick Prospero, faced off in a double final round for big money, big checks, and big trophies in two different classes to wrap up the 10th annual FL2K presented by Brian Crower at Gainesville Raceway. Mitchell scored the win with a career-best 6.543-second pass at 221.38 MPH to finish ahead of Prospero and his 6.741 at 209.33, taking the win in Elite Street Car Shootout and Extreme 28s.

The double final round was just one of the thrilling final rounds that closed out five days of action at Gainesville Raceway. The historic NHRA track played host to FL2K after Hurricane Ian caused damage to the event’s usual home track, Bradenton Motorsports Park, just days before the race.

“There’s a lot to say – I could probably write a book,” said Victor Alvarez, the promoter of FL2K and owner of Bradenton Motorsports Park. “First and foremost, I say thank you to my staff, the Gainesville staff, and NHRA for allowing us to do this at the last, last, last minute. Also, thanks to my beautiful wife [Helena] for delivering a baby on Monday and letting me go and do this. We didn’t have a lot of options and we didn’t have a lot of time. We had to move equipment and do a lot. We made it happen. Nobody ever told me no or hesitated, everybody just jumped in and went. Everybody stepped up, everybody had our back. That was a great feeling. Thank you is all I can say. The racers, the spectators, the sponsors, media – everybody stuck with us.”

The double final round between Mitchell and Prospero came about when both drivers made it to the final round in two classes, Elite Street Car Shootout presented by Motion Raceworks and Real Street Performance and Extreme 28s presented by Five Bar Motorsports and RI Automotive. Rather than run two races, the two drivers decided to run one final round for both trophies. It was a race between two true street cars, as Mitchell’s “Mullet” ’86 El Camino and Prospero’s “Green Mamba” ’90 Mazda RX-7 both put in hundreds to thousands of miles per year competing in drag-and-drive events.

The FL2K double-up was especially meaningful for Mitchell, who’s been chasing a Street Car Shootout win for the last few years. The YouTube star, with over three million subscribers, also brought a fleet of fan-favorite cars and drivers out to FL2K. George Siciliano, also known as “LS George,” won in 9.50 Index presented by Zubin Performance and Power Rev Racing in the supercharged ’02 Blazer out of the McFarland Racing camp.

“I’ve come up shy at FL2K the last two years,” said Mitchell, who thanked his team and Pete Harrell, who helped with the tuning. “Last year, we spun almost every run but one I think, then went out in eliminations. This year, we didn’t spin a single time. Not one of the cars in the group spun. That in itself is a huge accomplishment, plus all the cars are still running. They’re driving into the trailer. James [Taal] went out by .0002, Mullet won two classes, and George won his class. Way more than I could ask for this weekend.” 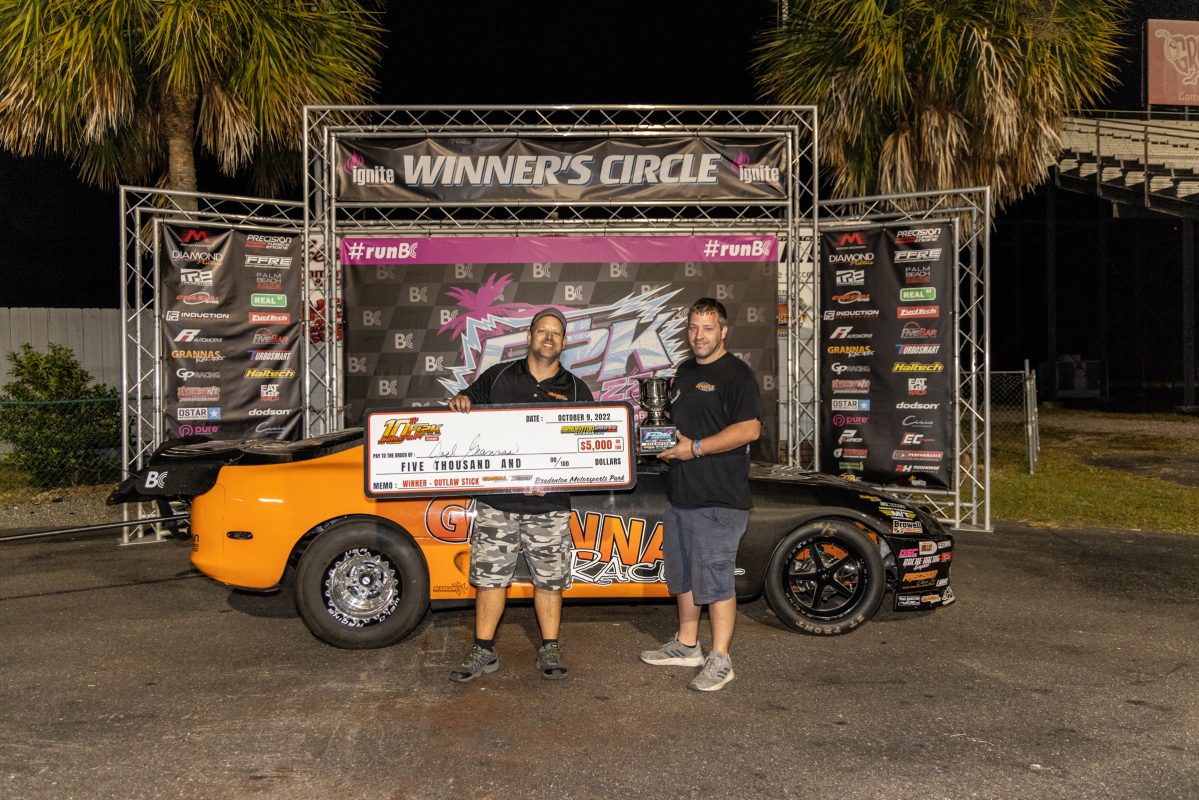 Another highly anticipated final saw Joel Grannas and Jonathan Atkins square off for the Outlaw Stick Shift presented by Grannas Racing and TurboSmart event title. Grannas qualified No. 2 in his Grannas Racing ’94 Toyota Supra, while Atkins qualified No. 1 and set a new stick shift E.T. record in his Tick Performance “Grubb Worm” ’97 Camaro. Grannas left the starting line first and held the lead through the finish line, posting a 6.691 at 221.38. Atkins slowed to a 7.174 at 156.28.

“We were struggling, and that was the seventh pass with that four-link,” Grannas said, “so to come through and even get qualified and get through that and take the win, that was amazing. That was an amazing feeling. I wanted the record, but that’s all right. It will come, hopefully. That was our first really good 60-foot, so there’s a little more potential there. I don’t know about in the top end. We threw the kitchen sink at it on that one. We were going for it.”

The huge Street Car Shootout class split up into four 16-car fields after qualifying. In addition to Mitchell in Elite, the winners were Russell Guise in True Street, Charles Sidote in Pro Street, and Billy Wakefield in Super Street. 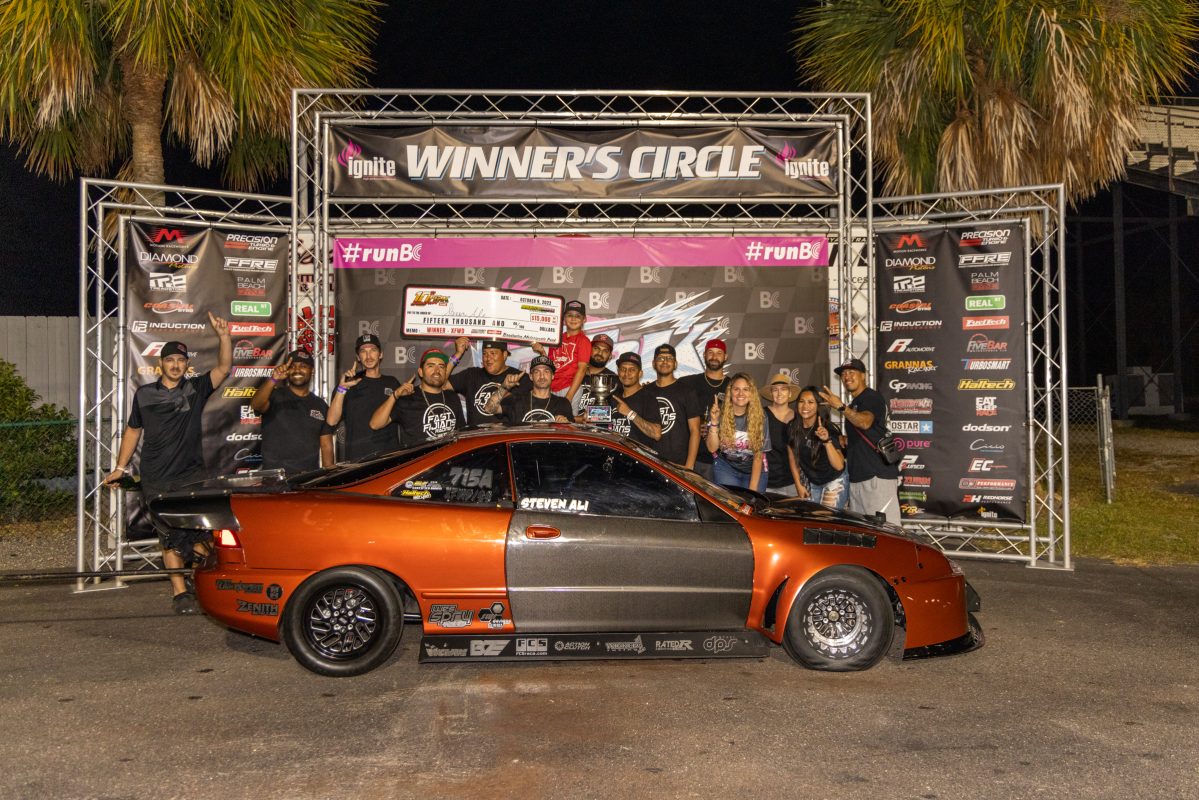 A 32-car field in XFWD presented by Precision Turbo and FuelTech was cut down to two drivers, Steven Ali and Joel Tavarez. Tavarez was unable to return for the final round, so Ali singled his way to a 7.983 at 191.54 to take the victory in his ’95 Integra. While the final was uneventful, the class saw exciting passes and races all weekend, including Nichole Elff’s 7.84 at 196.79 in the third round, which stood for low E.T. of the weekend for XFWD and made her the quickest and fastest woman in class history.

In DCT Extreme presented by Ostar Motorsports and Dodson Motorsport, the top two qualifiers met up in the final round to settle the score. Low qualifier Marcelo Duran in his ’14 GTR took the victory with a 7.313 at 198.99, while No. 2 qualifier Jordan Martin slowed to a 21-second pass in his ’18 Huracan.

Jason Heffner swept DCT Street presented by Pure Drivetrain Solutions and Cicio Performance, qualifying No. 1 and earning the event win behind the wheel of his ’17 Audi R8. He grabbed a holeshot advantage in the final round against Nathan Cicio in his Cicio Performance ’22 Audi R8, followed up with an 8.257 at 167.22 to beat Cicio’s 8.34 at 173.16.

George Siciliano, the winner in 9.50 Index, had to overcome the holeshot advantage of Shawn Calabrese and his ’00 Firebird in the final round. Siciliano in his supercharged ’02 Blazer was up for the challenge, driving around Calabrese’s 9.78 with a 9.706.

Bradenton’s own Faith Frost earned the victory in 10.50 Index presented by O&J Performance and Florida Torque Converter. Final-round opponent Austin Stephens left the line first, but he broke out with a 10.448 on the 10.50 index in his ’67 Rambler. Meanwhile, Frost recorded a 10.546 in her ’67 Mustang for the win.

Along with the heads-up and index classes, FL2K also include a No-Time Shootout presented by Florida N/T and Eat Sleep Race. Chris Tedeschi collected the victory in his ’00 Camaro, defeating Kurtis Forsberg in his ’91 Mustang.

Visit www.FL2K.com and the Bradenton Motorsports Park and FL2K Facebook pages for complete results from FL2K22 presented by Brian Crower.

The Bradenton Motorsports Park crew will waste no time getting back to the track to get it back in order for the upcoming Florida N/T “Out for Blood 3” presented by Speed & Truck World on Oct. 21.