Ron Capps tied Tony Schumacher for the most NHRA wins in Bristol Dragway history, picking up his sixth Funny Car win at the track on Sunday with his Father’s Day triumph at the NHRA Thunder Valley Nationals.

Capps powered to the quickest run during every round of eliminations on Sunday in Bristol, including a pass of 3.984-seconds at 324.36 seconds in the final round in his 11,000-horsepower NAPA Auto Parts Toyota GR Supra to defeat Tim Wilkerson. It also marks the first win in Funny Car for the new GR Supra. Capps advanced to the final round with impressive victories against Paul Lee, No. 1 qualifier Robert Hight and defending event winner Alexis DeJoria. In the final, he made the only three-second run in eliminations on Sunday to earn his second this season and a remarkable 70th in the defending world champ’s outstanding career.

“It’s an amazing thing and I’m living the dream,” Capps said. “Today felt different because we worked really hard at this one, and we knew that win for Toyota was out there. Everyone wanted to get that first one in the Supra and I’m blessed we got to do it. To run 3.98 in the final was unbelievable. This is a very demanding track every time we come here, and you can’t take your mind off it for a second. These wins, where you have to earn it, it really means quite a bit more, it seems like it.”

Tim Wilkerson reached the final for the first time this season by getting past Jack Wyatt, Chad Green, and John Force. Matt Hagan maintained the points lead in the class.

In Top Fuel, Ashley rolled to his second straight final round and finished the job on Sunday in Thunder Valley, going 3.813 at 325.30 in his 11,000-horsepower Phillips Connect powered by Vita C Shot dragster to defeat Shawn Langdon. It gives Ashley his second win this season and the fourth in his career, and his first victory at Bristol was a meaningful one with his father in attendance. Ashley, who qualified 14th but responded on raceday, got past Josh Hart, Doug Foley, and four-time defending world champ Steve Torrence to reach the finals before picking up the victory on Father’s Day.

“Happy Father’s Day to all the dads out there, who make dreams like this possible,” Ashley said. “I really have to take a second to thank everyone who allow us to come out here and be successful. (Crew chiefs) Tommy DeLago and Mike Green did such a good job with this Phillips Connect Top Fuel dragster all day. We’re very blessed, very privileged to be here and we’re enjoying it. This Bristol track has so much history. When you look up and see all the famous names [in the Legends of Thunder Valley]. It’s impressive and we’re very fortunate to get the win.”

Shawn Langdon reached his first final in 2022 after knocking off Spencer Massey, No. 1 qualifier Mike Salinas and Antron Brown. Brittany Force maintained the points lead, as Ashley climbed to third.

In one of the wildest Pro Stock final rounds in recent memory, Stanfield outlasted Elite Motorsports teammate Erica Enders in the championship round, going 8.801 at 103.98 in his Janac Brothers Chevrolet Camaro. Stanfield got loose early in the run, but then Enders ran into trouble, suffering an engine explosion, and the young standout was able to chase her down to pick up the win on Father’s Day. It was Stanfield’s first win from the No. 1 position and also the first time winning in the final round against Enders, who was seeking her fourth straight win.

Stanfield got to the finals with victories against Wally Stroupe, Fernando Cuadra Jr. and Kyle Koretsky and then drove to his sixth career victory – and first at Bristol – to cap off an impressive weekend.

“I cut it loose, and it shook at the top of low gear, so I stopped. Then, I could see smoke out of her car and Big Al [Lindsey, crewman] was on the radio telling me to go, go go,” Stanfield said. “I stuck it back in gear and tried to get there. It for sure did not go according to plan. Sometimes it goes like that. As a team we did a good job today. This the best gift I can give my dad [Greg] on Father’s Day. My dad and I love being here in Bristol.”

Enders, who maintained the points lead by advancing to her fourth straight final, fifth this year and 66th in her career, knocked off Cristian Cuadra, Matt Hartford, and Dallas Glenn to set up the final round against her teammate. 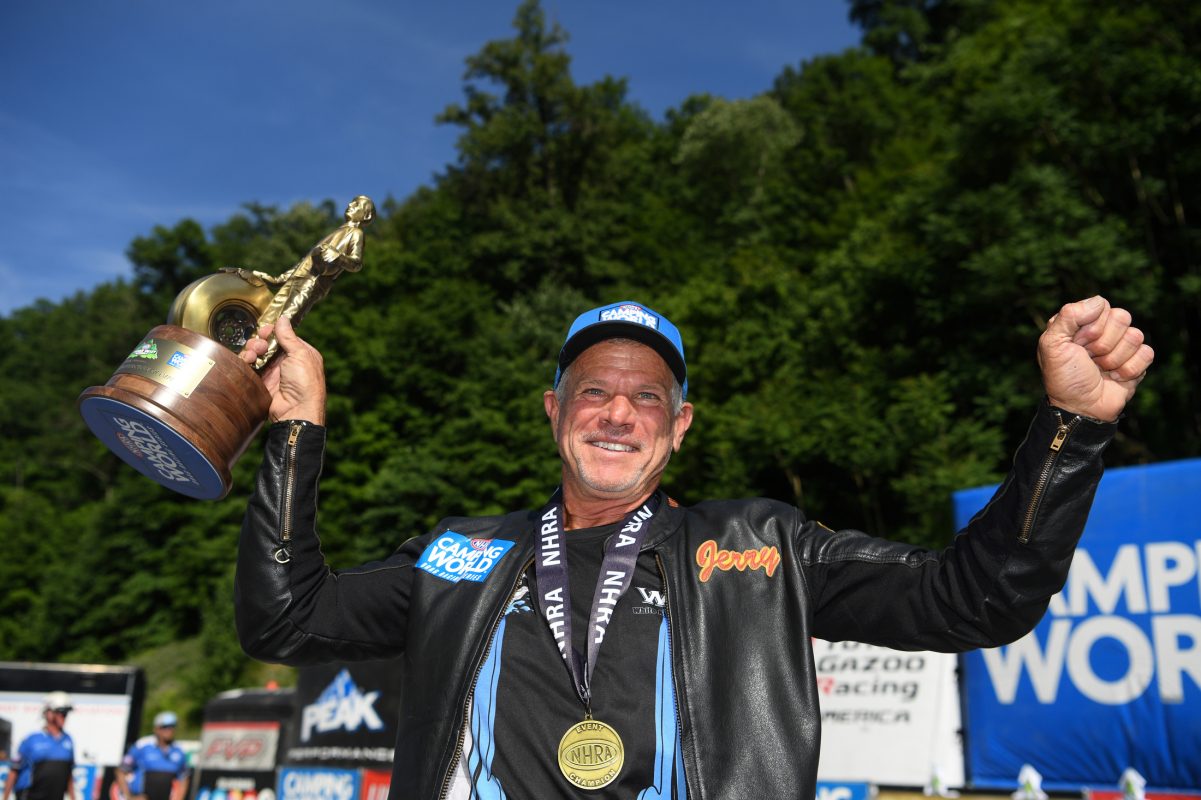 After a mad dash to the starting line after an engine swap before the Pro Stock Motorcycle final round, Savoie won for the first time in 2022 on his White Alligator Racing Suzuki when Angelle Sampey went red. Savoie also left too soon by .010, but Sampey’s .052 red light handed the victory to Savoie. He reached the finals by taking out Eddie Krawiec, Joey Gladstone, and Angie Smith, and capped off an emotional day with his 14th career win and first at Thunder Valley.

“We blew up the engine in the third round and thanks to NHRA and Vance & Hines for waiting on us,” said Savoie, who picked up his first win since 2020. “I usually don’t let things get to me and I put my faith in my crew, who did a motor swap in 32 minutes. I’m 63 (years old) and to be out here running with all these youngsters is amazing. I just wanted to win one race and now I’ve got 14 and a championship. I’ve been blessed. This was an awesome weekend, and I don’t think I could ask for anything more.

Sampey, who qualified No. 1, reached her first final round this year and 79th in her standout career with round wins against LE Tonglet, Ryan Oehler and Marc Ingwersen.