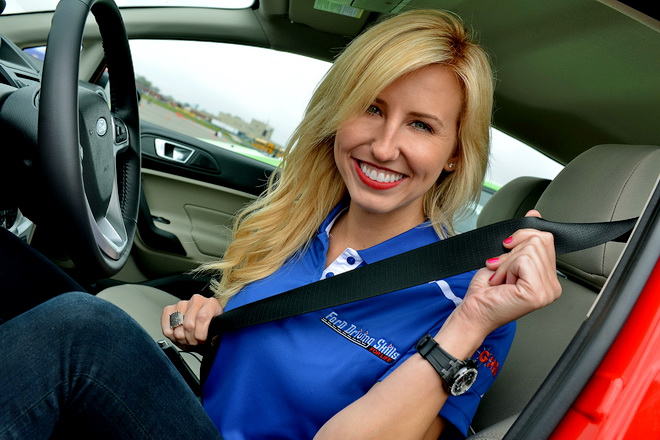 For the fourth year, Traxxas Ford Mustang Funny Car driver Courtney Force (above) is stepping up to the plate as the official spokesperson for Ford Driving Skills for Life. Force spoke to over 400 teens May 2, at Ford Driving Skills for Life’s “Strive for a Safer Drive” event, a teen driving initiative aimed at reducing serious traffic crashes, injuries, and fatalities among Michigan’s most inexperienced drivers–teens.

“The schools here today were part of a program called Strive for a Safer Drive in the State of Michigan, so they’ve done in-school programming and this is kind of the icing on the cake; getting to come out and do hands-on training with professional drivers and getting to meet Courtney, so we’re really happy she’s here. She did a great program about wearing seat belts and we’re just glad she’s here supporting Driving Skills for Life.”

During the DSFL Ride & Drive event today, students learned key skills and gained experience in the areas that contribute to more than 60 percent of teen crashes, including: hazard recognition, vehicle handling, speed and space management, distracted, and impaired driving, but Force’s major focus  was on one area–seat belts.

On the race track, it’s unthinkable for Force to drive without buckling up. Together with Ford, the 25-year-old is committed to helping teens understand that buckling up every time and exercising safe driving behavior is worth it to keep their car keys from revocation by either parents or law enforcement, or losing them permanently through serious injury or even death from an auto accident.

Courtney and the Driving Skills for Life team are also encouraging teens to share their efforts to “keep the keys” by offering their safe driving tips on Facebook and Twitter, using the hashtag #keepthekeys.