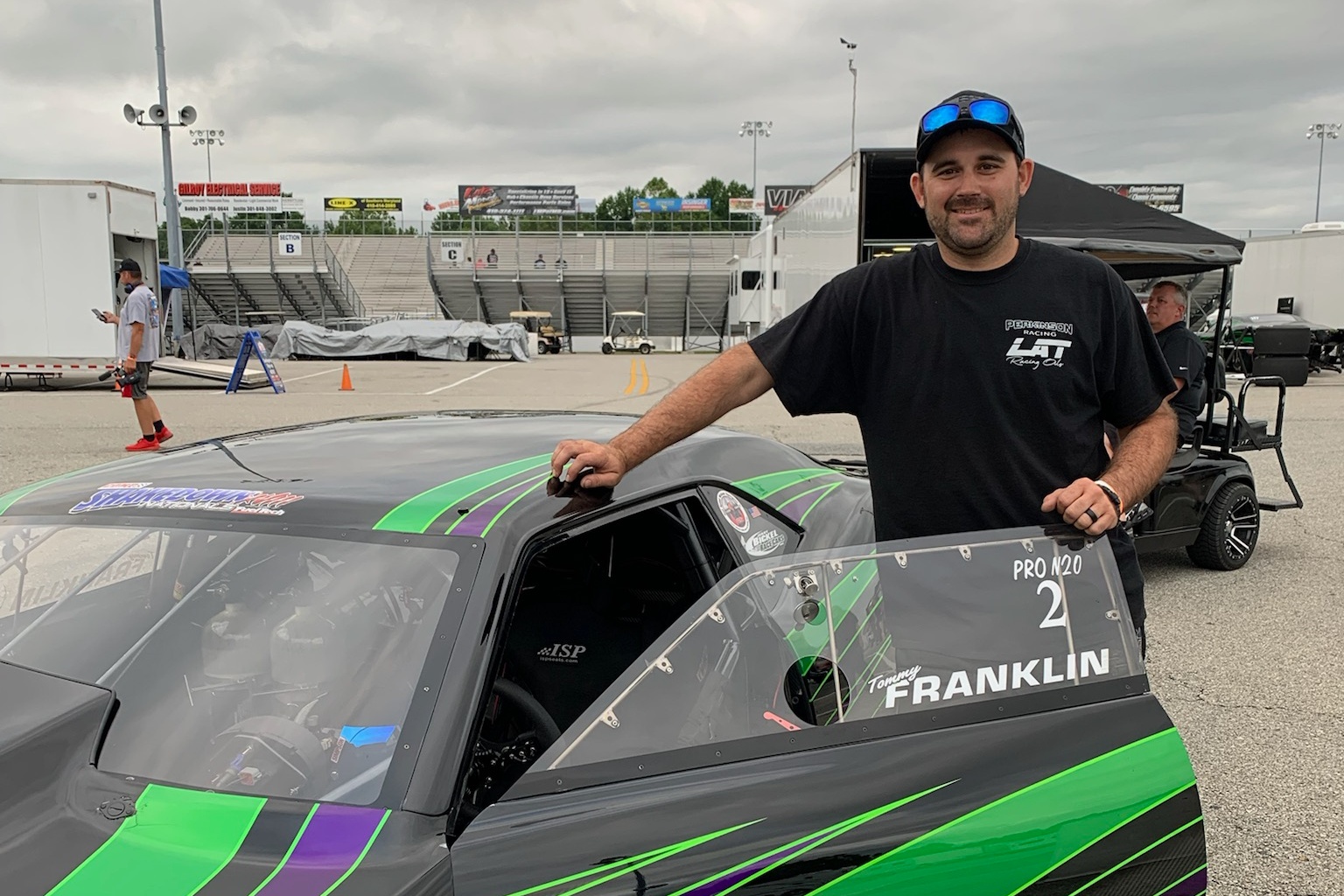 A scooter accident at Virginia Motorsports Park a couple weeks ago forced two-time PDRA Pro Nitrous world champion Tommy Franklin out of the driver’s seat of his Musi-powered “Jungle Rat” ’69 Camaro going into the PDRA North vs. South Shootout at Maryland International Raceway this weekend. But that’s not stopping the Norwalk winner from keeping his Pro Nitrous entry rolling – and his championship hopes alive – as he tapped Buddy Perkinson to fill in for him this weekend.

“Honestly, I just wanted to come out here and support the class,” said Franklin, who had a one-point lead going into the weekend. “Buddy is a great driver and it was an easy fit. He hopped in and he’s done his job great. We want to win races. That’s what we do. I can’t be selfish and act like it’s just about me, but the truth is we want to win races and come out here and go No. 1 like we did and try to win the race.”

Perkinson came out in Thursday testing and cut a .003 light and ran a 3.68 in his first run behind the wheel of the “Jungle Rat.” He made a string of solid runs in Friday qualifying, including a 3.693 at 204.32, to qualify No. 1 in his first Pro Nitrous start in several years.

“That’s a dream come true,” said Perkinson, who also qualified No. 1 in Elite Top Sportsman in his family’s ’69 Camaro. “It wouldn’t be possible without Judy and Tommy and the whole Franklin Motorsports team. To be able to step into an established, winning, championship program, that’s something that people dream of, and frankly, you never really get that opportunity. I’m just trying to do the best I can for them, and hopefully play the spoiler and keep some people from getting some points.” 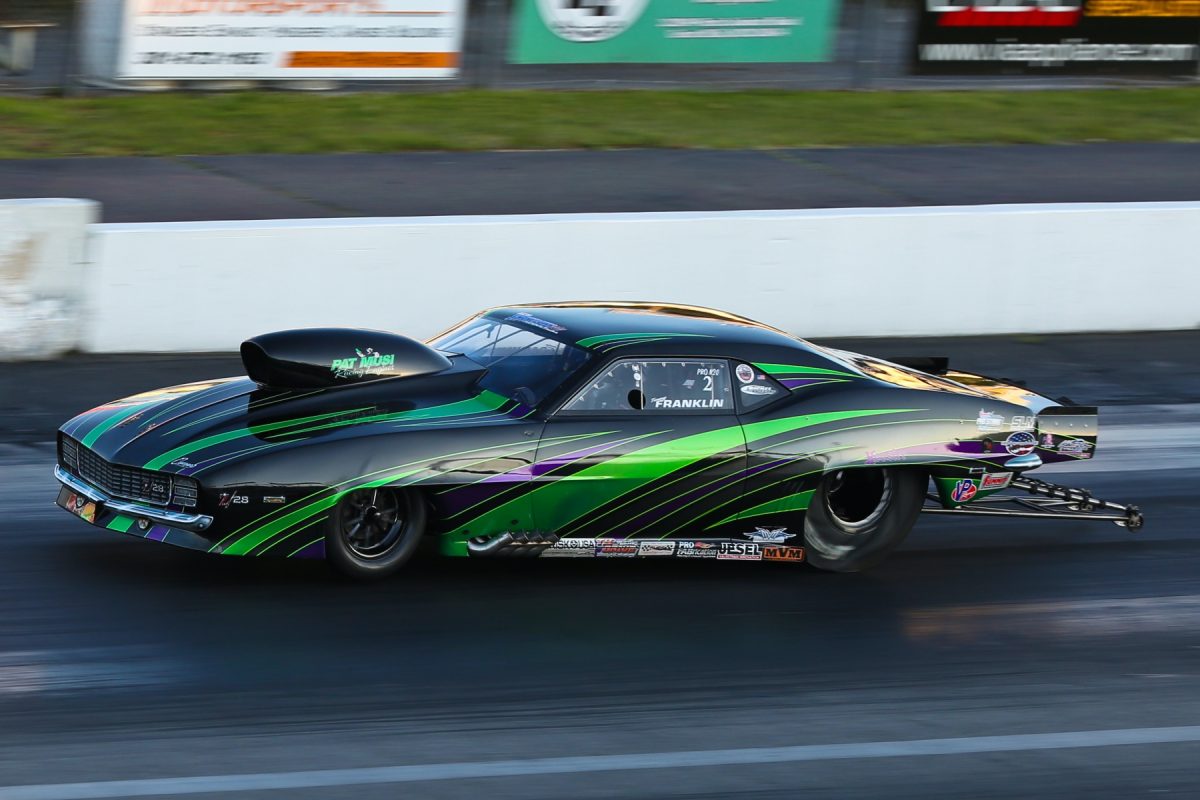 Perkinson’s Top Sportsman car, a Musi 959-powered ’69 Camaro that previously ran in Pro Nitrous, regularly runs in the low 3.70s and has even dipped into the 3.60s, so it wasn’t a huge jump up to Franklin’s Pro Nitrous car. He credits the Tommy Franklin Motorsports team for making his transition so seamless.

“It’s hot, so we’re not turning record numbers here,” said Perkinson, who also has experience in Comp Eliminator, NHRA Pro Stock, and Mountain Motor Pro Stock. “The speed and the E.T., I’ve experienced that before. The transmission was a little bit of a learning curve. The car is more fitted for Tommy. The steering wheel and pedals are in different places. But once you shut the door and you start the car, you just kind of go into a rhythm. It’s almost like a rhythmic thing where you just don’t think about it, you just drive the car.”

Perkinson will start race day with a first-round bye run, and he feels good about his chances as the day progresses from there.

“I think we have a really good car on a hot racetrack, which is always a big deal,” Perkinson said. “You can throw the Hail Mary runs on a good, cold racetrack at night, but you’ve gotta get there. I feel real confident going into first round. I think if everything goes good and I do my job, there’s no reason we shouldn’t at least be there at the end with a chance to win it.”

Like Perkinson, Franklin praised his crew for their efforts to keep the Pro Nitrous car on track and in championship contention. Franklin broke both of his hands in the accident, so he’s had to take a step back from his duties outside of the car too.

“I’m handless right now, so they’ve done everything – drove the rig, put up the awning, doing everything on the car,” said Franklin, who also thanked Pat Musi Racing Engines and Jerry Bickel Race Cars. “I can’t do much. I feel terrible about it. But there’s not a complaint. Everybody was on the same page – ‘we want to go up here and race and do what we do.’ That’s what it’s about.” 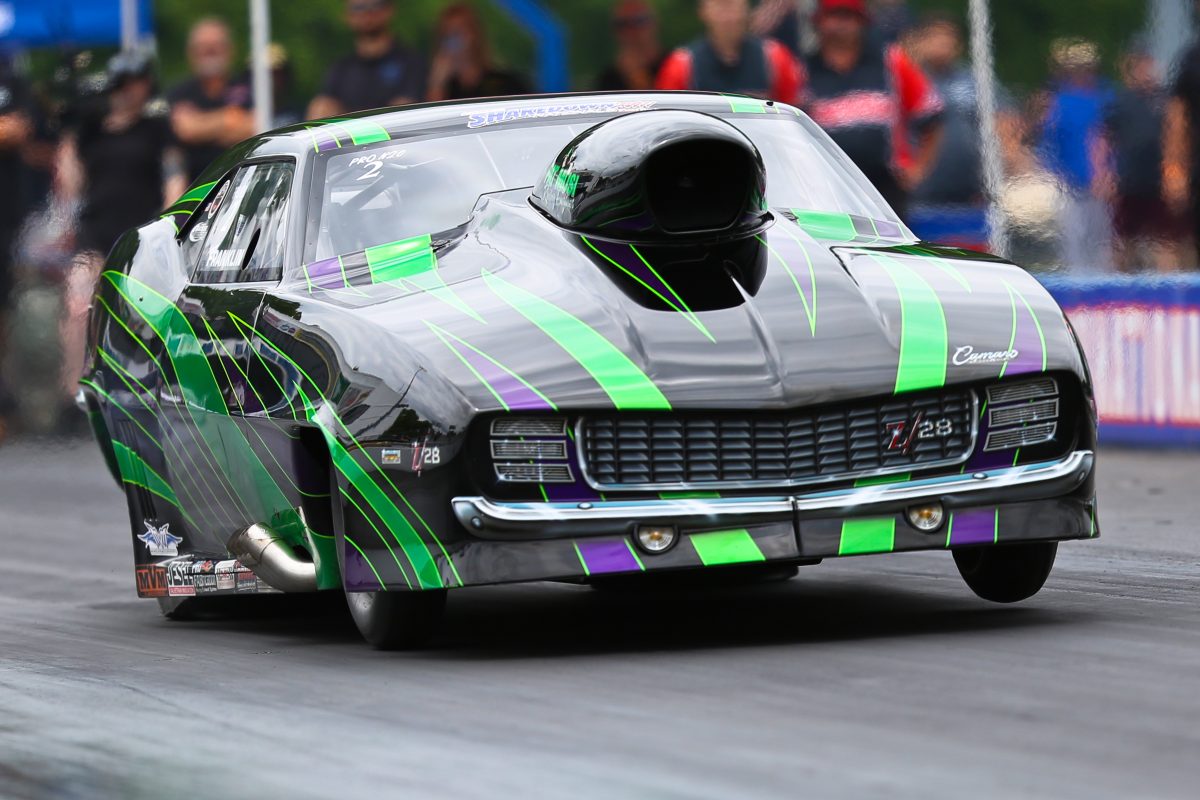 Franklin, who qualified No. 1 at the last two races and won the Norwalk race last month, slipped to third in points after qualifying. He has about three weeks to heal up before the next PDRA race, the Drag 965 Summer Shootout presented by Classic Graphix, July 14-16 at Virginia Motorsports Park.

Franklin’s other option for this weekend was to simply stage his car for one qualifying session and the first round of eliminations. Putting Perkinson in the car has resulted in a more exciting weekend so far.

“I could’ve rolled up there and took the tree and tried to steal a round of points, but that’s not the way I want to race,” Franklin said. “I hope to be here at the next race. If I can do that, we’re going to do everything we can to still catch some championship points. We’ll do what we can do, and all we can do is one race at a time. My team and everybody who supports us are great. I can’t complain about anything. No different than when I’m driving, the crew gives us a flawless race car. It’s been really good.”