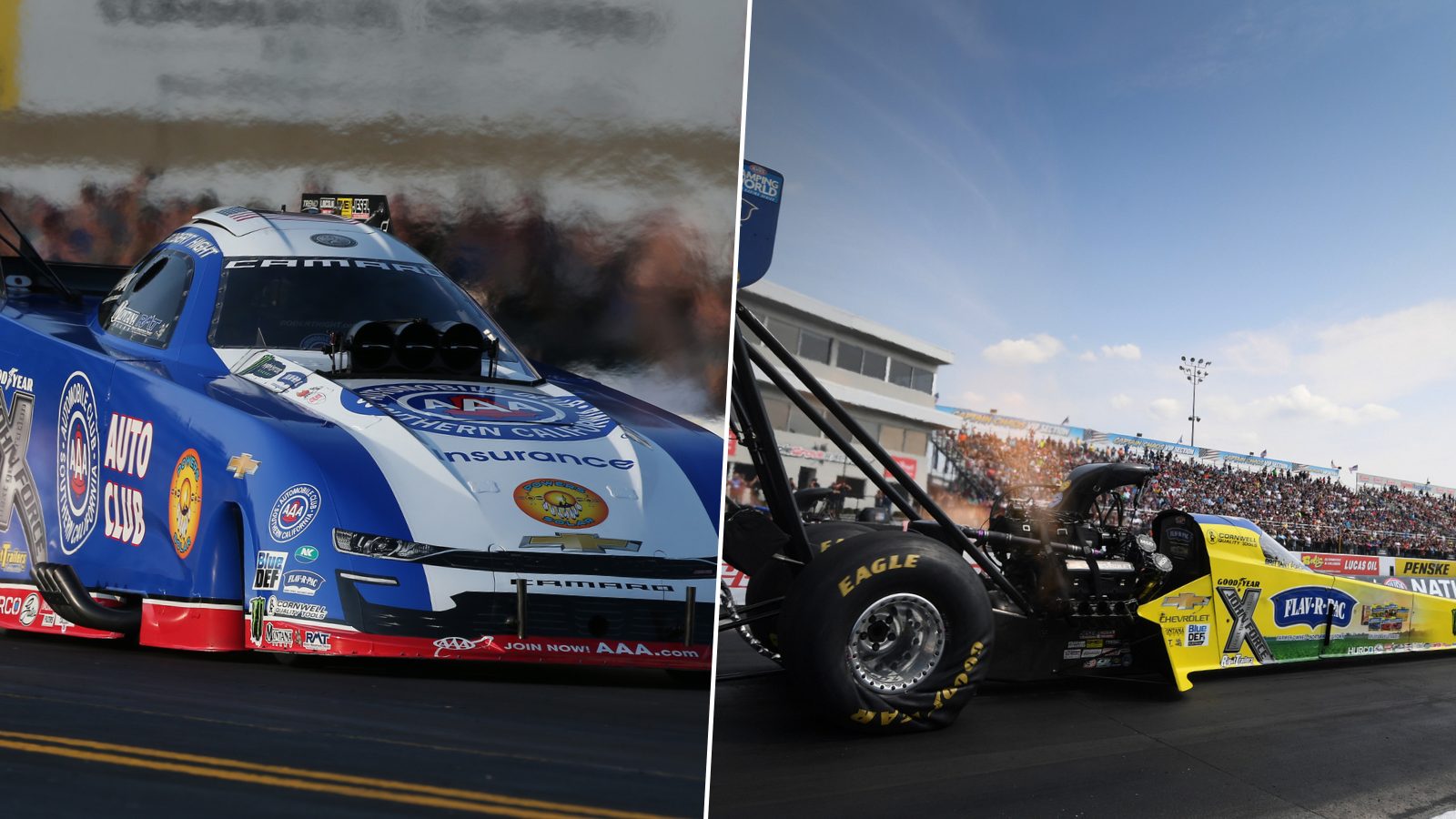 In front of a sold-out crowd at Maple Grove Raceway, points leaders Brittany Force in the Flav-R-Pac / Monster Energy dragster and Robert Hight in the Automobile Club of Southern California Chevrolet Camaro SS secured the No. 1 qualifying positions in Top Fuel and Funny Car Saturday at the Pep Boys NHRA Nationals. John Force and the PEAK Antifreeze and Coolant Chevy secured the No. 3 spot while Austin Prock landed the Montana Brand / Rocky Mountain Twist dragster in the No. 4 spot.

Brittany Force and the Flav-R-Pac / Monster Energy dragster tallied their eighth No. 1 qualifying position of the 2022 NHRA Camping World Drag Racing Series season and 40th of her career when they capped of qualifying with a thrilling run. Force would handle her David Grubnic and Mac Savage tuned hot rod to a 3.969-second pass at 327.90 mph despite putting a rod out near the finish line. It was a drastic improvement from her 3.967 pass at 270.16 mph earlier in the day.

“We weren’t going for the dramatics, but it was a solid run. We got this Flav-R-Pac / Monster Energy dragster down there and even though it’s unfortunate it was only one of three runs, it should be enough to learn what we need and apply it to race day,” Force said. “Getting down that first run today would have been important, but we are working with what we got, a 3.69 on the board and its No. 1 so can’t complain. We’ve done well here in the past, set records and ran well last year so we’re hoping to do it again. Go some rounds and have a long race day. We came in here with the lead and our goal is to leave here the same way.”

Robert Hight and the Auto Club team were consistent through their qualifying efforts. Coming into the day with the No. 1 spot, Hight was second quickest of both runs first with a 3.936-second pass at 329.99 mph and then closed out qualifying with a 3.883 at 332.51. In total, the Auto Club team earned seven bonus points en route to their fourth No. 1 of the season and 75th of Hight’s career.

“First off, hats off to the Koretsky family. There’s not a better feeling when you’re coming into the water box than to see a packed house, stands full, standing room only, it’s pretty exciting. That’s exactly what they needed for their first weekend,” Hight said. “These qualifying runs were big for the Auto Club team. We got points every single run. That’s what we have to do all six of these Countdown races. So now, qualifying is behind us and it’s time to focus on race day. Luckily, we get a bye-run first round. We’re still working on some things. That first run today we wore the clutch on it, otherwise I believe we could have been quickest that round. So, we have a run tomorrow to be able to make it right. It’s going to be a battle; it’s going to be a battle every weekend. Whoever wins this championship and stands up there at the banquet on Monday after the finals, they’re going to have earned it. I just hope it’s this Auto Club team.”

Coming into the day in the No.3 spot, Austin Prock and the Montana Brand / RMT team ran into some tire smoke for only a 4.373-second pass at 181.20 mph Saturday afternoon. The Joe Barlam and Rahn Tobler tuned dragster was able to improve in the final session with a 3.767 pass at 327.82 mph. They’ll start race day from No. 4 and run against Doug Foley.

“This Montana Brand / Rocky Mountain Twist team is starting off the Countdown to the Championship with our best performance in months,” Prock said. “This team has been working so hard to get these results and I’m looking forward to going to battle with them tomorrow morning. I honestly believe we are capable to walk away with our first Wally of the year tomorrow and make a huge jump up in the standings.”

John Force and the PEAK Chevy had a misstep on Saturday first going only 4.463-seconds at 192.47 mph after hazing the tires and shutting off early. In the final qualifying session, Force would drive into tire smoke for only a 6.042 pass at 113.51. He qualifies No. 3 off his 3.890 pass from Friday evening and will race Cory Lee first round.

“Tougher day today for the PEAK team. But we’re in the show, ran well last night,” Force said. “It should be a good day tomorrow. We’ve had great weather. What matters is that we are in the show. It’s the Countdown, we need to go some rounds tomorrow and hopefully get this PEAK Chevrolet into the winners circle.”

Competition at the Pep Boys NHRA Nationals at Maple Grove Raceway continues with eliminations Sunday at 10:30 a.m. Television coverage of the event continues on Sunday at 11 a.m. ET on FOX Sports 1. Eliminations will be aired Sunday at 2 p.m. or 4:30 p.m. ET (check local listings) on FOX Broadcasting Network.