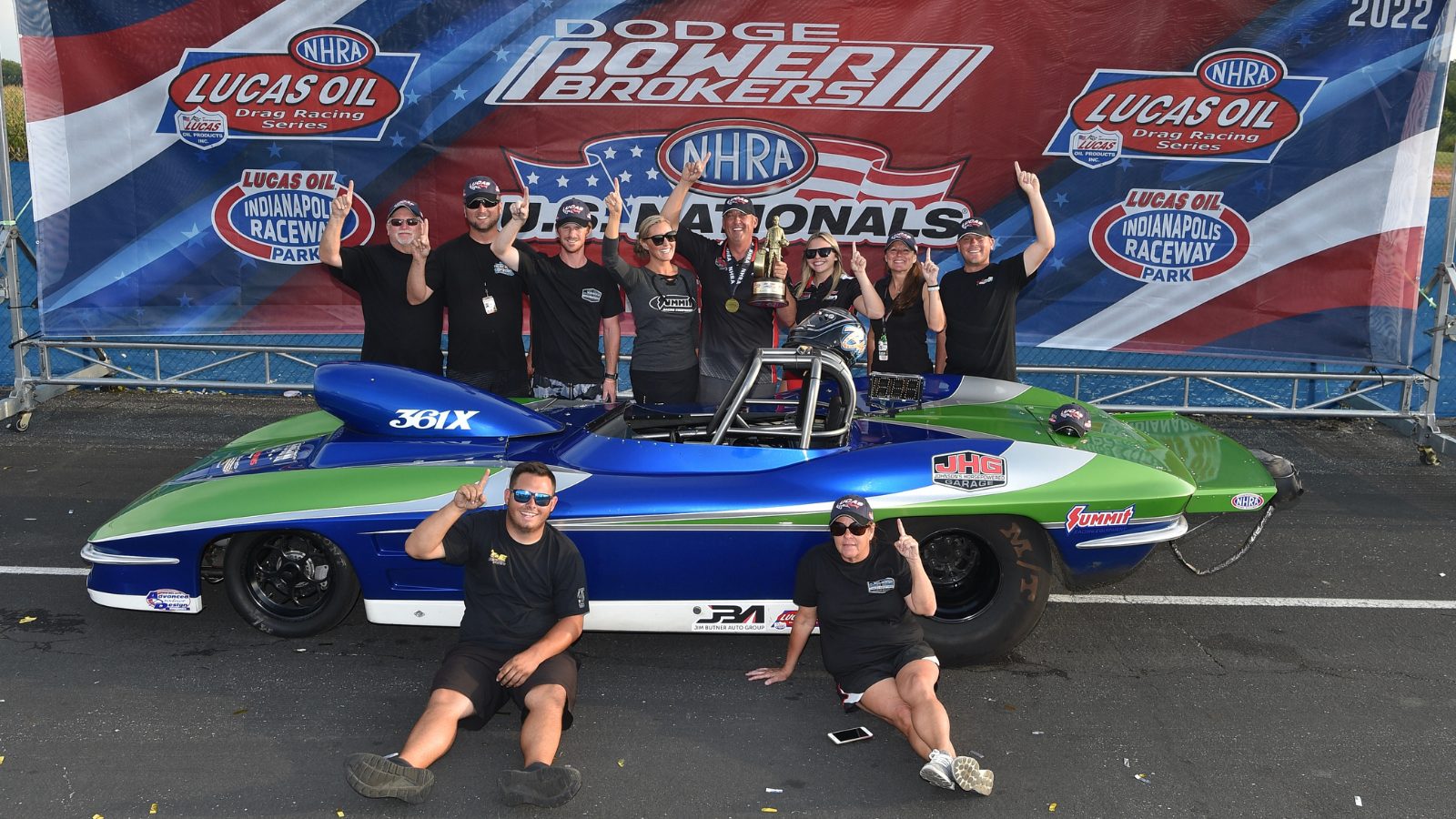 The Dodge Power Brokers NHRA U.S. Nationals is indisputably the grandest, most prestigious event on the schedule. Aside from a championship, “winning Indy” is a goal for most NHRA drag racers. Everyone wants to win Indy, and for Indiana native Bo Butner, it had been an elusive dream. But on Labor Day Monday at Lucas Oil Indianapolis Raceway Park (IRP), Butner earned the first U.S. Nationals win of his career behind the wheel of his Super Gas Chevrolet Corvette roadster.

“I’ve been to a couple of finals here, been to the semifinals, quarters – I’ve been racing here forever, since the 1990’s, and I’ve just never been able to win,” said Butner, who was runner-up at Indy in Pro Mod in 2020 and Comp Eliminator in 2004. “To finally get it knocked out is great, especially when I’m feeling a little under the weather.”

Monday at IRP dawned overcast and somewhat dreary, but Butner skipped worrying about the weather and got right to work, even though he wasn’t feeling in top form. He scooped up a round-win in Super Gas before the National Anthem was even played as NHRA officials packed the raceday schedule with late rounds of Sportsman competition ahead of Pro eliminations.

In round five of Super Gas, Butner’s.015-second reaction time and 9.909 on the 9.90 index gave him the nod over Steve Williams’ .019 and 9.945, and he headed over to the Pro Stock pits to warm up the Johnson’s Horsepowered Garage Chevrolet Camaro.

“I woke up thinking, okay, it’s going to be a good day today, I can win,” said the driver who had 27 wins across six different categories coming into the event. “I wanted to win both Pro Stock and Super Gas, but that didn’t end up happening.”

Through five rounds of qualifying, Butner’s JHG Chevy had been sharp. An engine change after the second qualifying session proved prosperous and landed the 2017 Pro Stock champion in one of his best qualifying positions of the year, the No. 5 spot, with a first-round draw of young Fernando Cuadra Jr.

“That happened, and then I wasn’t feeling right, and I’m just thinking, ‘Am I jinxed here, or what?’ ” admitted Butner. “But it turns out no.”

After the early exit in Pro Stock, Butner came back for the next round of Super Gas and ran closer to the index to defeat Maximus Butcher for a ticket to the 58th final round of his career. There in the final, he was .008 and 10.066 to beat Steve Hoyt’s .016 and 10.118 and claim the coveted U.S. Nationals hardware.

“I’m just so happy to finally win this race,” said Butner, following the victory that was his second national event triumph in Super Gas – his first in the category happened the first time he brought the car to competition at the 2019 Sonoma Nationals.

“This is a very special win, and I’m feeling good about Pro Stock, too. The JHG car was awesome; it has so much potential. I think if we get on a pretty good run, who knows what’s going to happen.”

The six-race NHRA Countdown to the Championship will begin in two weeks with the Pep Boys NHRA Nationals at Maple Grove Raceway in Reading, Penn., September 15-18.