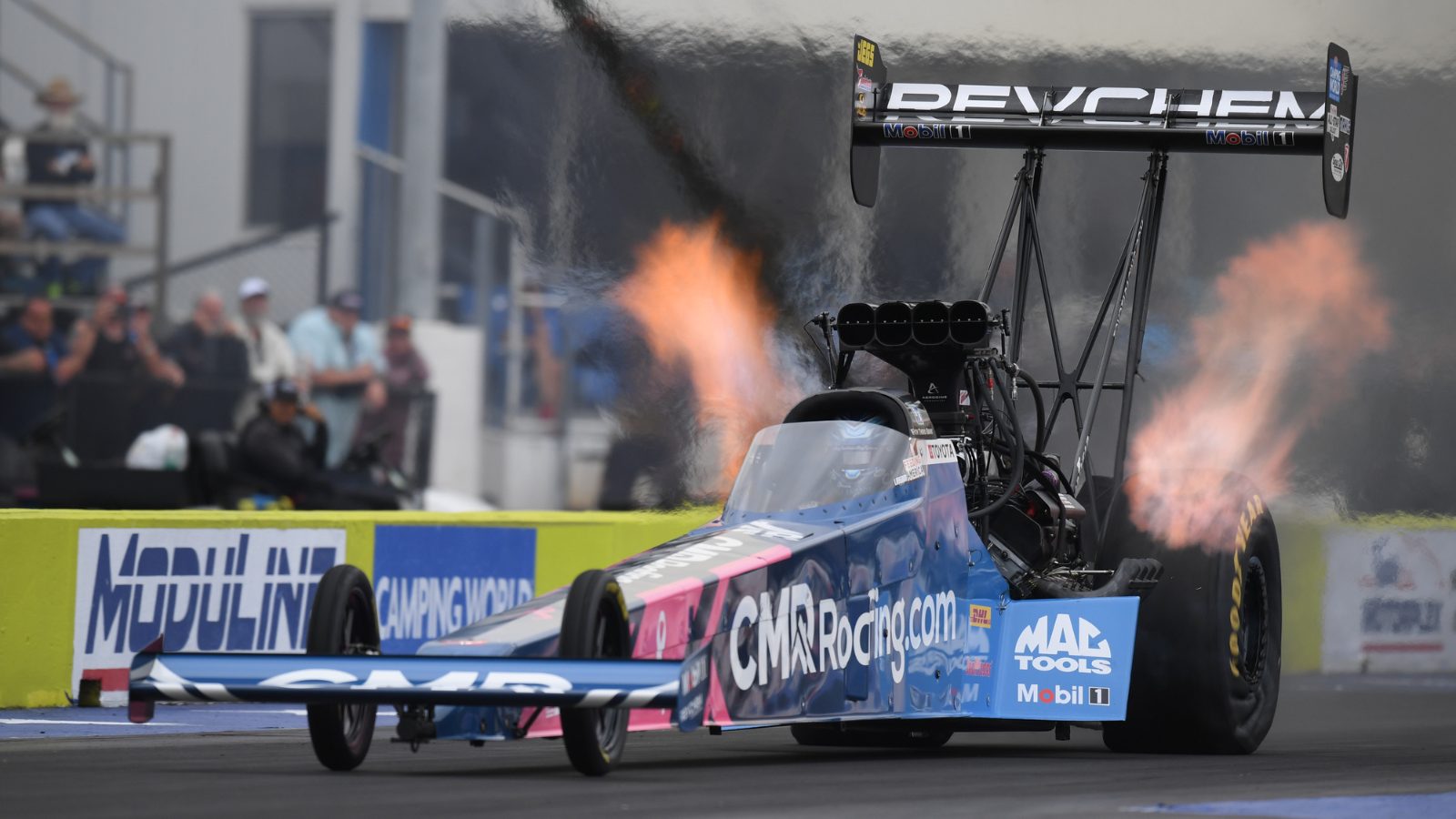 For the second consecutive NHRA playoff race Shawn Langdon raced to a semifinal finish. Today at the Texas NHRA Fall Nationals the 2013 Top Fuel world champion raced the CMR Construction and Roofing Toyota Top Fuel dragster to the final four from the No. 11 qualifier position. Through two days of qualifying the Kalitta Motorsports driver took advantage of four qualifying runs and positioned his team for success on race day.

In the first round he faced fellow Countdown competitor Steve Torrence, the No. 6 qualifier. It was a battle of Top Fuel champions and Langdon took the win never trailing in the race. He got off the starting line first with a .052 reaction time and his CMR Toyota dragster stayed right in the groove. His winning elapsed time of 3.730 seconds was his quickest run of the weekend to advance him to the quarterfinals.

In the next round Langdon faced Brittany Force looking to get back to the semifinals and close the gap on the drivers in front of him in the points. With two races remaining Langdon and his CMR Toyota team were up to the task and Langdon took a huge advantage off the starting line and that proved to be the difference. Langdon’s dragster leapt off the starting line with a .039 second reaction time in front of Force’s .097. At the finish line Langdon had enough horsepower thanks to his Connie Kalitta, Kurt Elliott and Jason McCulloch tune-up to grab another round win with a 3.721 second pass. The CMR Toyota dragster continued to improve throughout the race as cloud cover and cooler temperatures equated to excellent performance conditions.

In the semifinals looking to race to his third final round of the season Langdon squared off with Toyota stablemate and points leader Justin Ashley. Each driver is recognized as a driver who is at the top of the category in reaction times and the fans in the stands knew this race would be a tough match-up. Ashley took a narrow lead off the starting line, but Langdon was once again strong with a .040 reaction time and stayed side-by-side all the way down the track. At the finish line it was Ashley by a nose with his 3.686 second run outpacing Langdon’s 3.723 seconds.

His performance on the starting line was strong combined with his team’s on track improvement is setting Langdon up for a strong finish over the final two races in Las Vegas and Pomona, California, respectively.

“We definitely feel a lot better and we have the best driver out here so that gives us a little leeway,” said Kurt Elliott, CMR Construction and Roofing co-crew chief. “When we get close we can go rounds. We are still trying to get there can consistently run in the 3.60s in these kinds of conditions. We ran well in St. Louis and we just need to get there consistently and we know we can. No one over here is hanging their heads. With the driver we have we always have a shot.”

For his efforts and two win lights Kalitta Motorsports and primary sponsor DHL donated 40,000 meals to Feeding America. Through three races the team has combined to donate 180,000 meals to the national company working to end food insecurity in America. In two weeks the four-race program will conclude and Langdon will be looking to add more win lights and meal donations.